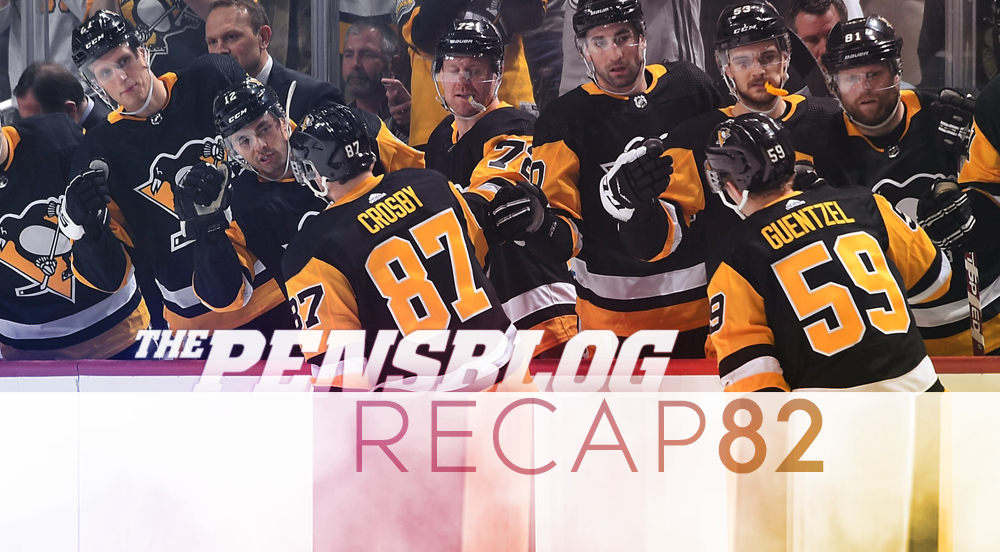 The Penguins have shown all season long to have that penchant for the dramatic and last night was certainly no different.

It was only amplified by the scoreboard watching going on around the Eastern Conference.

After a scoreless first period in Washington where the Caps rested the likes of Holtby, Backstrom, Oshie, and Carlson, the Isles got their noses in front 2:55 into the second and never looked back in their 3-0 win.

In Philly, the Flyers kept shit interesting, coming back from a 3-1 first period deficit to make it 3-3 6:07 into the 2nd, only to give up the eventual game winner 1:26 later.

So with the Penguins giving up a 2-1 lead in the space of 1:16 to fall behind 3-2 late in the 3rd against a bottom-dwelling team, the specter of a first round matchup with the Caps loomed large.

Safe to say, neither the Penguins nor the Capitals were too keen on that prospect.

And as they’ve done all season, the Penguins just willed it over the line, got that point to avoid the Caps, and notched their 4th straight 100 point season.

to set up the date we knew was coming all along.

Bring on the Islanders.

Although, it's hard for us to keep track of where you guys are playing these days…

HCMS stated he wasn’t resting anyone tonight and with more than enough scenarios at play, you might as well try to go out on a high note with the team that got you to the dance on Thursday night.  Murr vs. Alex George between the pipes.

Side note: Give Marcus Pettersson 84 games played this season.

All Pens to open the game just as it largely was all game at 5v5 and they got their just reward 6:36 into the game after a bit of a Kreider fuck up.

He just bypasses the puck, allowing Maatta to step in, take control and beat Zibanejad with a quick pass to McCann along the wall.  The Rangers were trapped with two forwards deep, a defenseman holding the blue line and Crosby beating their 3rd forward out of the zone to take McCann’s pass.

From there, Pionk was more fucked than someone on a casting couch, getting spun by Crosby’s one-handed dish to Guentzel.

So unselfish from Guentzel here, who could’ve burned his 40th by George, but instead looks it off and throws a sexy little number over to 87 for his 35th of the year and 99th point.

Sidney Crosby records his 7th season with 35+ goals, 2nd most in #LetsGoPens history

But in this league, one instance of not taking care of the puck can prove deadly.  Enter Garrett Wilson, Stage Left.

That line was dominating the Rangers in their own end and, even when Brickley looked like he was going to skate it out and through the neutral zone, he was met by some great defensive prowess in the form of Dom Simon.  It’s little plays like this that make him so damn good.

Brickley’s lone option is to turn it over to Gudbranson, who quickly moves it to Jultz to put the Rangers back on their heels.

But Garrett Wilson had other plans when he tried to force a pass across the center circle to Simon, finding Smith instead to turn him loose on a breakaway on Murr.

Murr’s side eye at Wilson was a goddamn mood.

Despite the odd goal against, the Pens carried the play for the majority of the period, but the Rangers weren’t without their scoring chances either.  Murr was good.  Crosby made a case for the Selke in there too

Just thirty seconds into the 2nd frame, Shittenkirk gave the Pens their first PP of the game for cross-checking Jake in the back and into the boards, but the story of the PP was Matt Murray keeping the Pens from tying the Bruins for most shorthanded goals against.

But on the very next shift, they went back to the PP with Lindgren going off for cross-checking McCann, also from behind and also into the corner boards.  The man-advantage was much better on round 2, but the end result was the same.

At 5v5, both teams felt in their respective wheelhouses trading off odd-man rushes, but the story of the period and game was the goaltending with Murr making 9 saves in total and George making 12.

You just knew that with the nature of this game, the Pens were coming out flying in the final frame.

And the breakthrough came off an absolutely MONSTER shift from Cullen-Bjugstad-Hornqvist where they just buried the Rangers in their own end for a full 45 seconds.  No words, just watch:

The way they hounded down the puck, forced errors, and ended up getting the breakthrough has to put this in with one of the best shifts of the year from any team.  Absolutely dominant.

Immediately after the goal and just before the Pens 3rd PP of the night, Guentzel got the closest chance he’d ever get to net goal #40, but it just wouldn’t go for him quite yet.

But that odd-man rush shit would not stop, and on a 3v2 that turned into a 3v3 with Guentzel, Crosby, and McCann storming the castle, Jake would try to do a little too much as he crossed into the offensive zone, getting his stick lifted and losing the puck to Skjei.

Skjei sprung Shittenkirk and off they went on a 3v2 with Andersson, catching Letang up ice jumping in to support the rush.  Forwards were gassed, Letang couldn’t get set with Skjei and Shattenkirk in front of him, and the latter fed the former for the ripper from the high slot.

But right after the goal, the Pens had a chance to go back up in front with Simon drawing a penalty.  Except…

…after getting set up, Crosby’s cross-ice pass to Jultz ended up in RTJ’s skates and with some vintage Red Wings level interference out of Zibanejad, Jultz still got a desperation stick on it, but only as far as a reaching Pionk.

Guentzel did well to get on  his horse and get back in the play, but Malkin’s pinch here undid everything.  This is probably the lone time this season that having 2 defenseman on the PP would’ve worked because Malkin stepping up here instead of dropping off send Namestnikov in one-on-one with Murr.

Weird goal as it just rides up and slips through despite Money Bag beating the shit out of Namestnikov here.

But just when you were getting ready to remember what it feels like to play the Capitals in the playoffs, the mother fuckin’ boys showed up to send this to overtime and set up that date with the Islanders in, on, or around Long Island.  Pick your preposition, who cares.

Again, Simon with a great play to set up a goal that won’t get recorded on the scoresheet.  Watch the beginning of this clip and how he comes from the far corner of the zone to burn over to the low corner and force Pionk to eat it along the wall until Lindgren could come over and support.

But Simon’s play allowed the Penguins to get over and close down the wall, leading to Guentzel and Schultz holding the puck in at the point and sending it back down low.

Cue Simon chasing it down again, forcing Pionk into a less than comfortable play on his backhand, which Jultz again was able to hold in beautifully at the point.

Guentzel and Simon went to work down low to eventually set up a Jultz bomb for Crosby to go digging again, getting it loose and over to Money Bag for his 40th.

Second shift of OT, Crosby and Guentzel nearly finished this off, but ruled no goal for interference despite Skjei putting Guentzel into Georgiev.

Over the boards hopped Malkin, Phil!, and Letang and they were bobbing and weaving and creating, but their looks would be the last looks the Pens would get.

His teammates went for a change, giving him the opportunity to reset the whole thing while the Pens gasped for air.

And as soon as he stepped into the offensive zone again and walked past Malkin, the game was over.

Bring on the Islanders.  Go Pens.