Know Your Enemy Part 1: How The Penguins and Islanders Stack Up 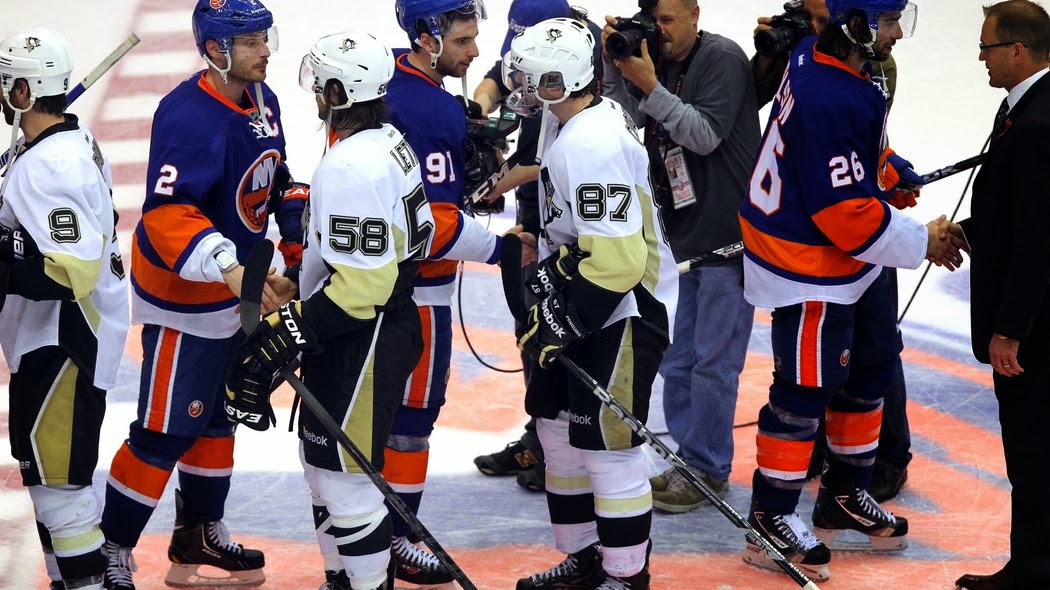 Know Your Enemy Part 1: How The Penguins and Islanders Stack Up

At long last, the NHL playoffs are here.  Today, we begin a 3 part series to take a look at the Penguins/Islanders first round matchup.  This is Know Your Enemy Part 1.

After the long grind that is the regular season of the NHL, we finally have the 16 teams that are going to be vying for the Stanley Cup and the honor of etching their names onto it for eternity come June.

Among those 16 teams, for the 13th straight season, are the Pittsburgh Penguins, who have a long awaited date with the New York Islanders.  That series opens on Wednesday in/on Long Island.

Both teams come into the postseason on the heels of 100 point seasons, with the Islanders capturing the 5th best 103 points and the Pens netting the joint-7th best 100 points in the league.

For the Penguins, it was their 4th straight 100-point year.  For the Islanders, it was their first since 2015-16, which also happened to be their last postseason appearance.

That year, they lost in the 2nd round the Lightning.  The Penguins, on the other hand…

SAN JOSE, CA – JUNE 12: The Pittsburgh Penguins celebrate after their 3-1 victory to win the Stanley Cup against the San Jose Sharks in Game Six of the 2016 NHL Stanley Cup Final at SAP Center on June 12, 2016 in San Jose, California. (Photo by Bruce Bennett/Getty Images)

As far as the season series goes, both teams come into the postseason having gone 2-1-1 against the other on the year, but haven’t seen one another since December.  What we said in those games:

One thing you’ll notice about those scores is that the Penguins, who averaged 3.30 total goals per game this season (6th most), managed to score more than 3 goals just once this season against the Islanders, which will be one of the biggest thing to keep an eye on as this series progresses.

On the flip side, only 9 teams scored fewer goals per game this season than the Islanders and their 2.72, while the Pens 2.90 goals against per game ranks them right in the middle of the pack (14th).

But what this all boils down to is this: the Penguins can score goals with the best of them, but no team in the league gave up fewer goals than the Isles 2.33 per game at all strengths.

With that, let’s take a look at what they did to get there this season and how they stack up against one another.

When looking at the 5v5 data, this trend of the Penguins generating a ton and the Islanders suppressing a ton becomes really noticeable.

We see this, too, when looking at the high danger scoring chance data.

In fact, the Penguins 12.26 high danger chances created per 60 minutes was the 4th most this season and their 10.59 against per hour was 14th best.  The Isles, as you can see, came in right on top of the Pens in terms of HD chances allowed with 10.79, while they weren’t far off with their 7th best HD scoring chance creation of 11.94.

And while there are certainly similarities there in the high danger chances, the quality wasn’t quite the same.  For that, we head to Money Puck’s Expected Goals Model.

At a per 60 minutes level, we get a true sense of what these two teams are.  The Penguins teeter between “Good” and “Fun” with their 2.59 expected goals for per hour of 5v5 play and 2.39 expected goals against per hour.

The Islanders, on the other hand, are very much a “Boring” team, which we have gathered from their propensity for being a very low-event team.  Their 2.36 expected goals for and 2.3 expected goals against put them among the lowest in the league this season.

On a per game level, that shows up too as the Penguins mustered 2.14 expected goals for and 1.98 expected goals against this season per game at 5v5, while the Islanders hug that “Boring” title with 1.95 for and 1.89 against.

This is something we can also see by looking at the 5 game rolling average of the share of expected goals over the course of the season.

Aside from a stretch at the beginning of the year and just after the calendar turned to 2019, the Islanders didn’t venture too far away from that even 50% split of expected goals throughout the course of the season.  For the Penguins, outside of the few ebbs and flows where they were bad at the beginning of the year and we also pretty ordinary in January to February, they have firmly owned an obscene share of the 5v5 expected goals, particularly as the season approached its conclusion.

This bodes well for them if they’re able to capitalize on these looks.

What’s interesting to note is that the Islanders, unsurprisingly, led the league in PDO (1.022) with a 5-on-5 save percentage of 93.66 and the 8th best shooting percentage of 8.57, but rarely this season did they get that elite level goaltending and all of the goals at the same time.  Also worth noting that the Penguins 93.09 5v5 save percentage was 4th best in the league, but we’ll talk about the goaltenders tomorrow.

So what does this mean in terms of controlling the events that occur while these team teams are on the ice?

Well, it turns out that aside from the share of goals, the Penguins are a much better possession team across every category we looked at here.

It’s going to be a slog of a series, but if the Penguins can generate like they have all season and finish the possibly limited chances they’re allowed to create at 5-on-5, we can be looking at avoiding a 2010 Jaroslav Halak or 2013 Eastern Conference Final scenario.

With all of that in mind, this series may still come down to which special teams units do the business at the right time of the year.  Because even if the Penguins run into a similar situation like Barry Trotz put them in last year when he was managing the Capitals, or Robin Lehner does do the Halak or the Penguins get Bruinsed, they may just need to find breakthroughs on the powerplay.

Because for as good as the Islanders are at suppressing at 5-on-5, their PK is anything but that.

For a quick viz of this, we look at Wave Intel’s Versus Tool.

The Penguins finished the regular season with the 5th best powerplay conversion rate of 24.6%.  They’ve gone through stretches, especially recently, where they’ve been anything but deadly.  In fact, over the last 3 weeks, the powerplay has scored just 4 goals on 30 chances (13.3% – 27th).  Part of that can be chalked up to the omissions of Kris Letang and Evgeni Malkin from the lineup.

That 13.3% is only slightly worse than the Islanders conversion rate for the season, which found itself 29th with a 14.5% rate.  As you can see above, they generate a higher end amount of scoring chances, but they just don’t shoot the puck.

Meanwhile, you can say that neither penalty kill has been particularly good this year, either.  The Penguins finished the season killing off penalties 79.7% of the time (19th), while the Islanders killed off the 18th best 79.9%.  What’s interesting, though, is that the Penguins don’t really give up a lot on the kill.  In terms of both sets of scoring chances against, you can see that they find themselves near the top of both.

But the Islanders, well, they give up a lot of shot attempts and scoring chances.  And against a powerplay unit that possesses Sidney Crosby, Evgeni Malkin, Phil Kessel, Kris Letang, and Patric Hornqvst/Jake Guentzel, the lethal nature of that PP unit could prove to be the Islanders undoing over the course of the next two weeks.

Given what both of these two teams are good at, we could be in store for 4-7 games of 2-1 results.  At this time of the year, sometimes luck prevails above all else, but with the players the Penguins have and their scoring ability, it should be enough to pick the Islanders apart even in the face of Robin Lehner rising to the occasion to steal a game or two.

Buckle up for Parts 2 and 3 tomorrow.  Go Pens.