Your Morning Dump.... We're grateful Marcus Smart's injury is a bruise and not a strain 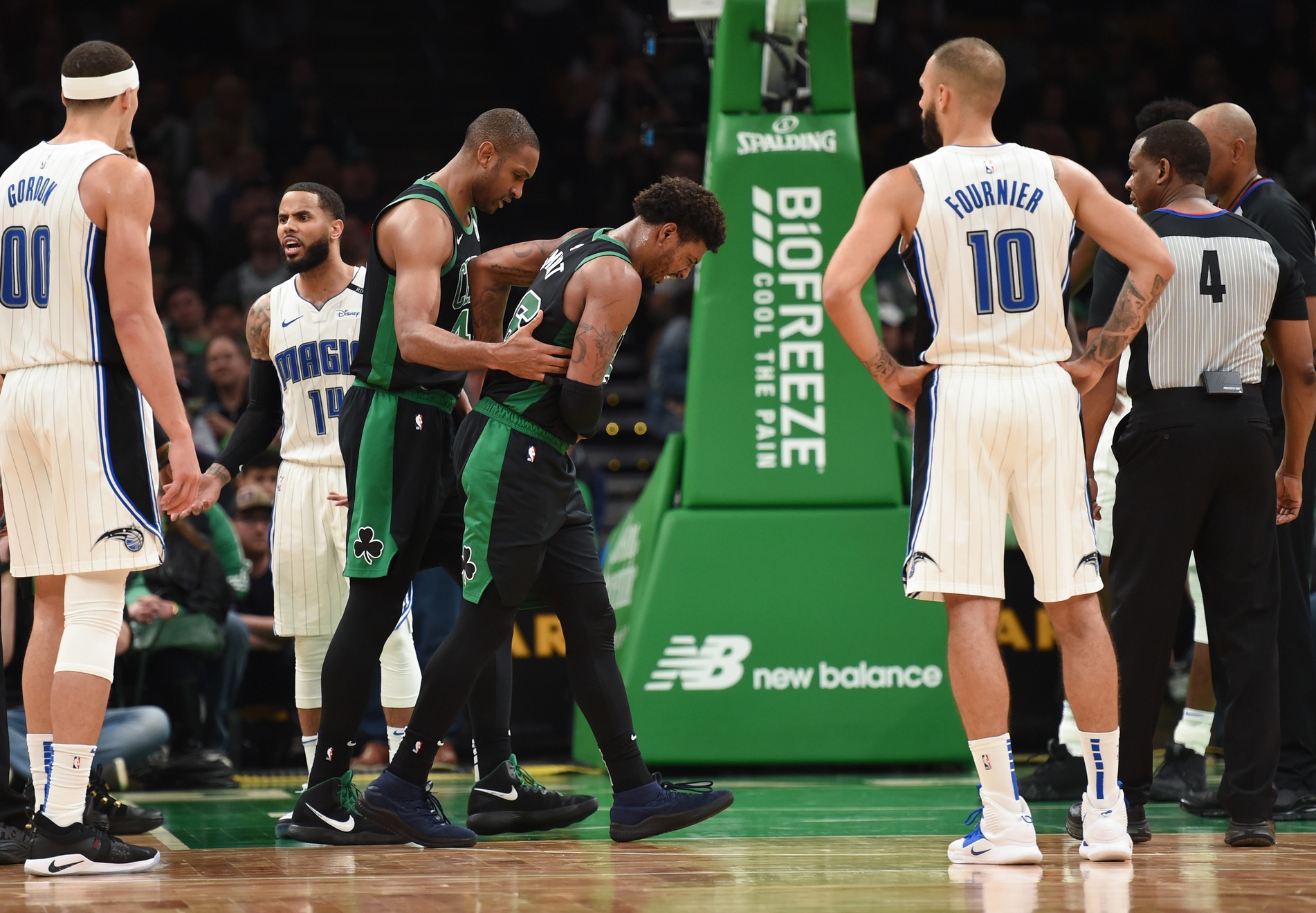 Your Morning Dump.... We're grateful Marcus Smart's injury is a bruise and not a strain

Marcus Smart will not return to the game due to a left hip contusion from this play (@AAANe_MAnews) #AAANortheast pic.twitter.com/4zVVfp1gwo

Smart’s injury appeared to be more serious. Initially reported as a hip contusion, ESPN’s Adrian Wojnarowski reported Smart had suffered an oblique strain. After the game, Stevens said that was not the case.

“Marcus Smart has an oblique bruise, which means he got hit right there,” Stevens explained “I guess that’s better than a — I don’t know whether it would be called, a strain or whatever, but we’ll see what that looks like tomorrow. He was a little sore but was walking around, which was good, in the locker room.”

Smart clearly collided with Orlando’s Nikola Vucevic, and there was a delayed reaction before he went down to the floor. He initially came back into the game, but then signaled for a substitution and fell the floor again.

For a meaningless game, this one had a lot of drama. As far as Smart’s injury, the difference between a bruise and a strain can be a few weeks of recovery.

With Game 1 vs Indy set for (reportedly) Sunday, Smart has a week to rest and should be fine.

Jayson Tatum’s shin “injury” seems like much ado about nothing. Heck, Stevens didn’t know it was a pre-existing condition:

“Tatum had a shin contusion that evidently he had before the game, and I didn’t know about it,” Stevens explained. “He just said it felt a little off when he jumped, so, you know, hopefully it’s nothing major but we’ll get it checked out tonight and tomorrow and we’ll go from there.”

Stevens caught some flak on social media for running some guys (Kyrie, Gordon) deep in the final quarter of a meaningless game, but, always, there’s logic behind his decisions:

“The point of tonight was to try to — because we probably won’t play ’till Saturday, maybe Sunday, was to get a true, kind-of, game for some of our starters and our top seven or eight guys,” Brad Stevens explained after the game.

On Page 2, the Pacers are fading…

Would the Celtics rather play the Nets or the Magic or even the Pistons in the first round over a hobbled Pacers club that is 21-21 since Victor Oladipo sustained a season-ending knee injury on Jan. 6?

What’s more, just four of the Pacers’ 21 wins were against teams with winning records.

Indiana hung in there in the Eastern Conference by its strong early start and then devoured a bunch of cupcakes in the second half of the season.

The Celtics, meanwhile, won five of their past seven games, including a pair of wins over the Pacers and Heat. They seemed to approach the form they were expected to when the season began and even played an inspired fourth quarter to rally from a 14-point deficit to tie the Magic at 106 before Orlando responded with a couple of key baskets in the waning minutes to pull away.

Are we feeling confident? For this series, yes. I think Boston will win in 5.

An emerging Gordon Hayward (fingers crossed) and the Pacers poor play (lost 10 of last 15 games) give me confidence.

Over the last ten years, three #4 seeds in the East have advanced to the conference finals or more:

2018: Cleveland – Lost in the NBA Finals to Golden State.

2012: Boston – Lost in the Eastern Conference finals to Miami.

2010: Boston – Lost in the NBA Finals to the Los Angeles Lakers.

Globe – Jaylen Brown back in business