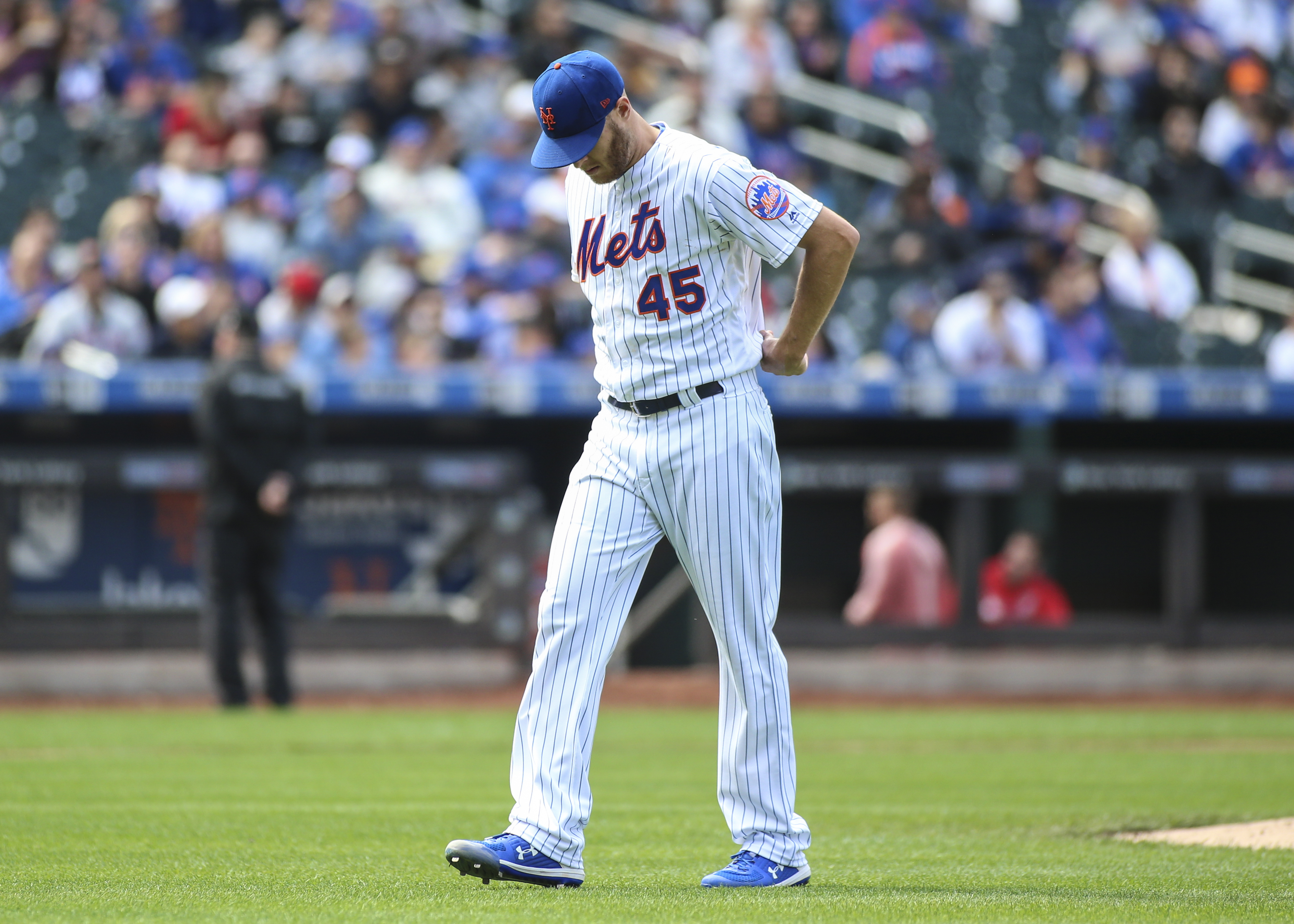 There were plenty of positives to take out of yesterday’s loss for the New York Mets, who didn’t quit despite going down 12-1. The Mets rallied for eight runs late against Max Scherzer and the Washington bullpen, but it was all for naught because they simply dug themselves far too deep of a hole. A big part of the problem was a very poor outing from Zack Wheeler, who walked seven batters and gave up seven runs in 4.2 innings pitched. Wheeler now has an ERA of 10.24 over his first two starts of the season, both against Washington, which is a major problem if the trend continues.

Apr 7, 2019; New York City, NY, USA; New York Mets pitcher Zack Wheeler (45) walks off the mound after being taken out of the game in the fifth inning against the Washington Nationals at Citi Field. Mandatory Credit: Wendell Cruz-USA TODAY Sports

While the Mets were highly optimistic after Wheeler put together a tremendous second half in 2018, it is important not to forget that is still just a half season worth of baseball. Wheeler was a highly inconsistent pitcher prior to that stretch, showing off great stuff but struggling with his command, particularly the base on balls. Optimists may point out that it is still very early in the season and Wheeler may heat up along with the weather, but you cannot ignore the fact that history shows this version of Wheeler is more likely than the guy who pitched to a 1.68 ERA down the stretch in 2018.

Simply put, the Mets cannot afford to have Wheeler go back to being an inconsistent pitcher if they want to go anywhere this season. The Mets’ strength is their starting rotation, and while Jacob deGrom is brilliant and Noah Syndergaard should get it going, Wheeler was being counted on as the third dependable guy. If that is no longer the case, the Mets’ rotation is in peril since there is precious little depth beyond the big three.

If Wheeler’s struggles continue it could motivate the Mets to seriously consider adding Dallas Keuchel. The team has kept in contact with Keuchel, but at this point they remain unwilling to meet his asking price, which is either a one year deal worth more than the $17.9 million qualifying offer he rejected from the Houston Astros or a multi-year deal at a lower annual salary. More rough starts from Wheeler could encourage the Mets to reconsider, but even if they signed Keuchel today he would still need roughly a month to get into game shape.

The other concern with Keuchel is the fact that pitchers who have signed late over the past year didn’t fare well with their new clubs. Alex Cobb, who had a tremendous track record in Tampa Bay, went through a nightmare season in Baltimore after signing late in the spring. The Mets also saw this with Jason Vargas, who didn’t sign until late February last season and was terrible in the first half. The easiest fix for the Mets is to get Wheeler right again, and solving that problem could be the biggest key to how they fare this season.