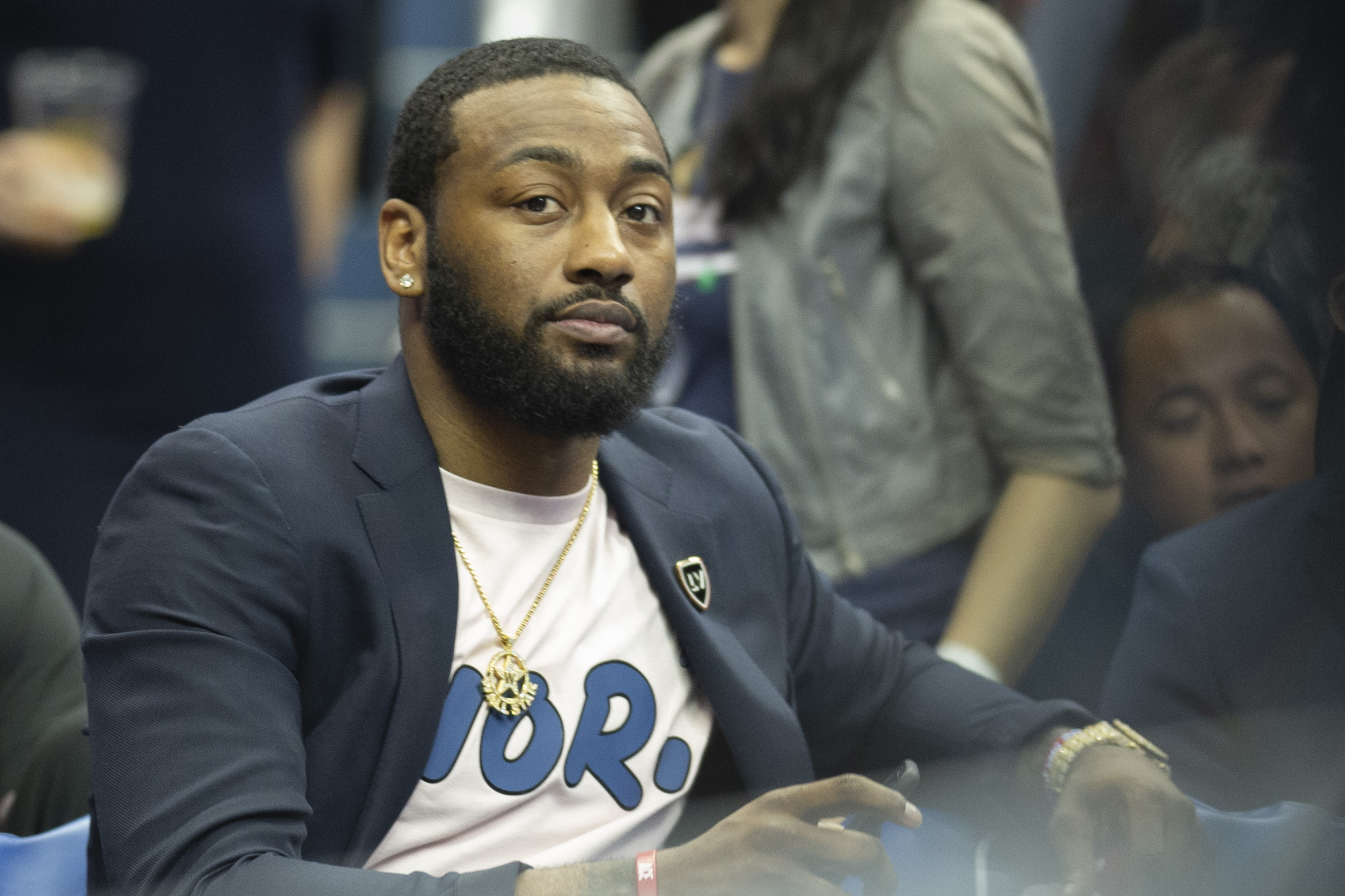 The Washington Wizards season is finally over after a epically disappointing 32-50 year lowlighted by franchise point guard John Wall’s ruptured Achilles after on and off issues with irritating bone spurs in his heel. For the second straight season, Wall missed extended time and he will be sidelined for the majority if not all of the 2019-20 season. The $170 million man spoke to the media for the last time for who knows how long during halftime of the team’s season finale. Here is exactly what he said in the order he said it.

On progression since Achilles surgery:

“It’s been going great. Just chilling. Relaxing. Doing everything the doctors want me to. Almost getting my stitches out so I’ll be fine.”

On how long he will be on scooter and in walking boot:

“Scooter, it’s supposed to be until I get my stitches out. And after that I can just start walking in the walking boot. I think a month, maybe.”

On process since initial surgery:

“I think it [Achilles rupture] was kind of going to happen regardless. So I am kind of glad it happened then, then me getting head on and starting rehab and then it finally happens when I’m back playing so. I think it was already to the point where it was getting weaker and it was going to give out so I’m glad it gave out then and instead of me already being four months in and rehabbing so, I’m cool with it. I’m in a positive mindset.”

On if he thinks Achilles was weaker after initial surgery:

“I just think so. That’s my mindset. I don’t know potentially how it was, but I just feel like it was getting weaker like after. We lift my Achilles up, took the bone spurs out and put it back down. I think it kind of just got weak.”

On what he looks forward to in the offseason:

“Me in the offseason? Ha. Just get my motion back in my foot. Being able to walk on two shoes. That’s what I’m really waiting to get to. Then after that it’s just taking my time and go through the process however long it takes.”

“Just having the opportunity to be around our team as much as possible. Support these guys, be around my family and friends and just be around my son. Watching him grow every day is kind of easing the pain and make everything a little bit more simple.”

Wall will spend most of his offseason in Miami. When he is not with a Wizards trainer, presumably Director of Player Performance and Rehabilitation Jesse Phillips, the team will help Wall find someone who can supplement.

On goals when he returns:

“My goals is everybody writing me off, keep doing it. That’s my ultimate goal [to prove them wrong]. Other than that, I am just taking the process as long as it takes to get back right. And whenever my body feels like I am back to ready to play, that’s when I’ll come back. Think I’ve been through the process, playing with injuries of just coming back before I was suppose to, injuring myself and just making it a lot worse. So this is one just take my time and let my whole body heal and get back to being 100 percent.”

John Wall is using the haters as fuel in his recovery: "Everybody writing me off, keep doing it." pic.twitter.com/p8dhgufiCo

On if he reaches out to other players who have ruptured their Achilles:

“Naw, not really. Just watching these guys come back and playing. That’s all I need. I don’t believe in conversating with too many guys. I talked to Boog, I mean that’s my best friend. But just watching these guys come back, DeMarcus, Rudy Gay, Kobe came back, Mike Conley. Those guys just give me a lot of hope and believe in myself. Knowing me, I know how I attack rehab and how I like to workout and make myself a lot better. So those guys give me a lot of life. But it’s like any injury you have, if you don’t attack rehab the right way, you’re not going to be nothing.”

On Ernie Grunfeld being relieved:

“I wrote a tweet about it. It’s always tough to see somebody lose their job. Ernie and Ted and those guys brought me here. He did the best he can to try and make the team better for us and add the right pieces for us. I wish him the best of luck, I hope he can get another job somewhere. We appreciate everything he did for us and what he’s done for my career since he’s been here.”

On last time he was fully healthy:

“16-17. It was like my best year. The bone spurs in my knee weren’t going and then the ones in my heal were not bothering me at the time and then it just started getting worse and worse. I think that was the last time I was really healthy.”

John Wall said he has not been fully healthy since the 2016-17 season when the #Wizards were one game away from the Eastern Conference Finals. pic.twitter.com/JJN1THdA6j

On his level of input in front office search if in Miami:

“I won’t go to Miami until we figure out all that. Whenever we have the pre-draft workouts and stuff, I try to be here and watch these guys. It’s not hard to hop on a flight and come watch guys workout. I think I was here last year for a lot of workouts they had and seeing who we was thinking about in the draft.”

“It’s great, phenomenal. I think he’s an All-NBA player in my eyes. But you know how tough it is to make that team, it’s always tough. The year he has, it speaks for itself.”

John Wall on Bradley Beal's season: "It's great, phenomenol. I think he's an All-NBA player in my eyes. … The year he has, it speaks for itself." pic.twitter.com/zPgxFsOYr5

On doctors not knowing what level he will return at:

“Whatever they say, I don’t really pay no mind to. They do the surgery, that’s their job. It’s my job to get myself back to where I think I can be no matter what any surgeon does. If I don’t attack the rehab the right way or make sure I’m in the right, best shape or right state of mind, it doesn’t matter. Anytime you come back from injury, you’re out there playing basketball and keep thinking about it every time you’re out there, you’re never going to be the same.”

On what he will be doing by the end of summer:

“Hopefully I’ll be able to jog and do stuff like that. Probably dribbling and taking some shots, stuff like that. Just talking to DeMarcus and asking him where was he at in this certain type of month and kind of helped me to where I want to be at.”

On the season result:

“It was nowhere near where we thought it was going to be. Brad had a heck of a year, Tomas stopped up in a big way, Thomas Bryant also did great. Troy getting an opportunity to play later on, helped him out a lot. Making the trade for Jabari and Bobby Portis, those guys came in and did well for us. All of those guys give us some bit of hope next year.”

On the early struggles:

“Well one, me not being fully healthy. We just trying to play through it. Just not getting off to a good start. Whenever I’m not at my best or Brad is not at his best, we definitely not going to be a team that we’re supposed to be. I think that’s the key reason why.”

On changes under new front office:

On what team needs given few players returning:

“That’s kind of hard to say right now. I really won’t have an answer for that one, but most of the years I’ve been here, we always got like five or six guys on one-year contracts. That’s always tough to deal with because those guys are fighting for their lives and fighting to make sure they keep their job in this league. So I think you kind of want a sustained people, core group around that is going to be here for a while. They don’t have to worry about ‘well I have to have this great year or do this great to make sure I stay on this team or even get looked at by the other 29 teams.’”

On if he expects to play next season:

“I have no idea just yet. That’s my goal is to, that’s my mindset, what I’m pushing towards, but whenever the doctors clear me to get me to that point, then I’ll know.”

On if Wizards drafted a point guard with their top-10 pick this summer:

“Me, I’d be fine. I don’t have no problem with that. Because it is what it is, you have to do what’s best for the team right then and there and make sure you have pieces and when I come back, he can be a great backup to me.”

John Wall is fine if #Wizards were to draft a point guard: "When I come back, he can be a great backup to me." pic.twitter.com/maGa0Zmc4B

On what he can fall back on to know he will be back:

“People don’t understand how bad it was for my bone spurs in my knee. Like I wasn’t supposed to comeback from that the way I did. And I was supposed to be out longer than five months. It was supposed to be eight to ten. Just knowing I couldn’t bend my knee there, things like that, had sharp pain. So that just gives me a lot of confidence in knowing that I can come back.”

John Wall knows he can come back from his Achilles injury because he came back from his knee injury last season in 5 months instead of 8-10 months: "People don't understand how bad it was for my bone spurs in my knee. Like I wasn't suppose to comeback from that the way I did." pic.twitter.com/oT6RFyzFGa

On how the injury helps him appreciate things:

David Aldridge: “What do people say?”

John Wall: "Hear what people say, just keeps my fuel going. I read all the articles and what people say. I love it."
David Aldridge: "What do people say?"
Wall: "'It’s over. His career is over.' All that type of stuff. So, it’s fun for me." pic.twitter.com/jyyGoskSDw

On if he has spoken with LeBron James:

“Naw. I talk to him but it ain’t about the injuries. With him, it’s more about bigger than basketball.”