What The Islanders Did To Stymie Sidney Crosby in Game 1 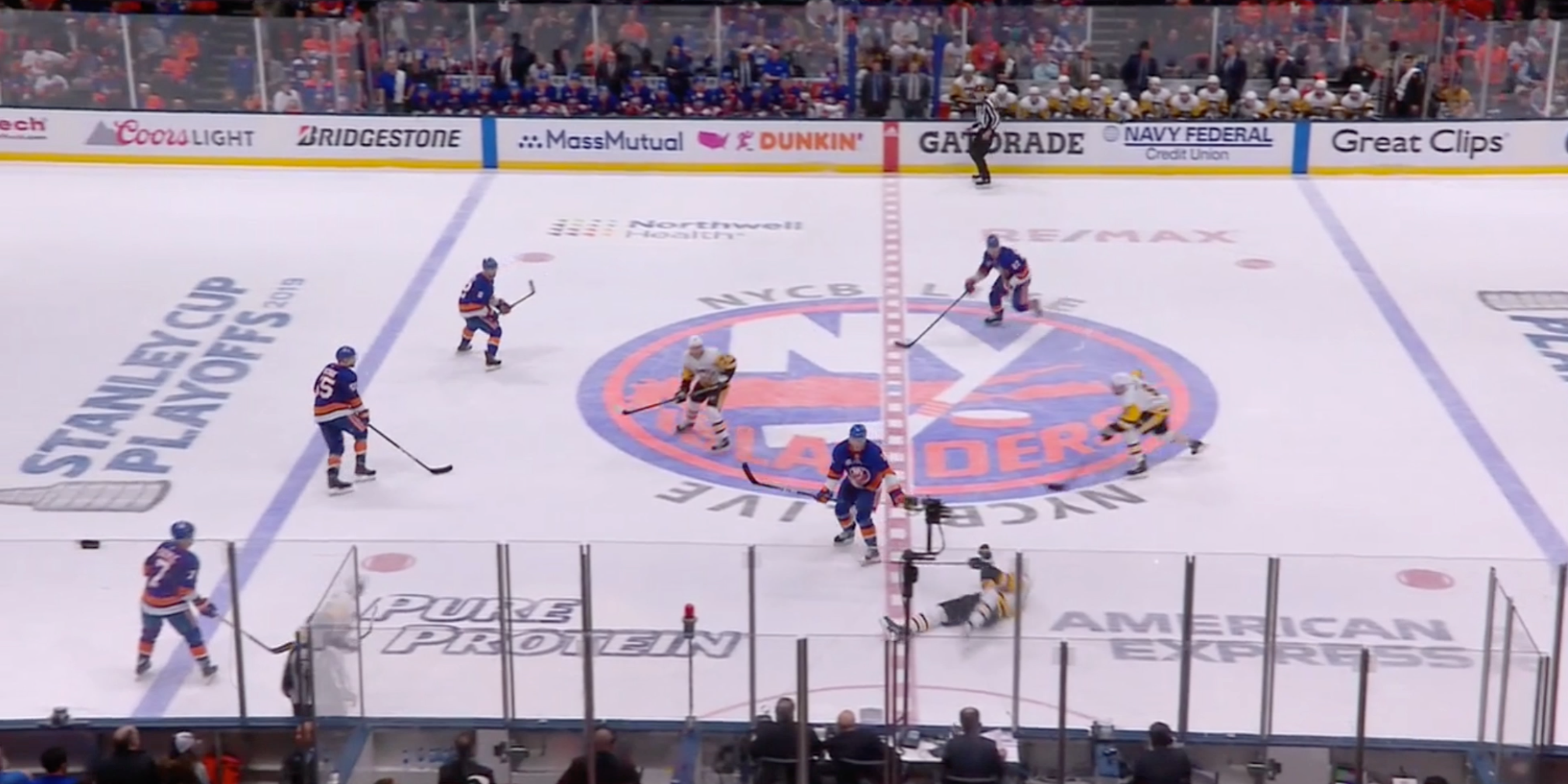 What The Islanders Did To Stymie Sidney Crosby in Game 1

If you asked Siri if Sidney Crosby played hockey last night, there’s a good chance that she would tell you yes and that the Penguins dropped Game 1 in overtime on Long Island.

While this is true that he played, it’s hard to imagine a worse start to a series than the game Sidney Crosby had last night.

Crosby’s line with Guentzel and Rust flanking him played 12:36 of 5-on-5 play last night.  Over the course of that ice time, they managed to generate just 7 shot attempts, all of which were unblocked, just 5 shots on goal, 1 scoring chance, 1 high danger chance, and a cumulative expected goals of 0.24 and 0 actual goals.

They managed to generate exactly 0 attempts off the rush, too (all stats via Natural Stat Trick).

These aren’t margins you expect to see out lines centered by Sidney Crosby.

So why was that?

A lot of it came down to the play of the Islanders 4th line of Matt Martin, Casey Cizikas, and Cal Clutterbuck, whom Crosby saw about 7+ minutes against at 5v5.  They had help on the back end from Ryan Pulock and Adam Pelech, each of which played 11:55 against 87.

The on-ice results were staggering and came via a two-prong attack (or defense, I guess).

The first of which came through a swarm on Crosby and his on-ice teammates, both in the defensive and neutral zones.

In this first clip, we see Crosby pick up the puck in the neutral zone after a faceoff win and immediately pushed towards the benches by Barzal, cutting off 80% of the other side of the ice.  With Pulock already drifting back and Rust no longer a passing option, Crosby can only dump it in and exchange possession as both of his wingers are flat-footed at the blue line.

Swarming the Pens while Crosby was on the ice was huge for the Islanders success last night.  Check out the next two in which Clutterbuck buries Dumoulin behind the net in a race to a dump in, where Matt Martin and Casey Cizikas joined in to close off either side of the net.  With the Pens all trapped down low, the sequence is filled with total control by the Islanders 4th line.

This heavy forecheck, particularly against the Crosby line, seemingly wore the Penguins top line down to the point that escaping the D zone was practically nonexistent.

But when they did, they were met with tons of resistance in the neutral zone.

Exhibit A, late in the first period:

In the clip above, the Penguins have a chance to cleanly break the puck out through Justin Schultz.  Jordan Eberle is the lone forechecker, meaning he has the full support of all 4 teammates in behind him while simultaneously keeping the left wing from being an outlet option.  Schultz send it up right right wing to Rust, but a 4v2 is created and with Crosby surrounded, Pulock is comfortably able to get to the chip in and move it to Pelech for the eventual exit.

As Maatta (in the first) and Simon (in the second) enter into the neutral zone, the Islanders generally have no willingness to put pressure on either of them, save for the lone guy in the middle of the ice.

Instead, what they were doing was similar to what Barry Trotz did against the Penguins last year in their 2nd round matchup: stack the defensive blue line with 3 players across, with a forward dropping in to be that barrier with the 2 D, as seen in this still late in the third where Eberle, Boychuk, and Leddy are 3 strong across the line.

Simon is a little fortunate because the middle forward, Cizikas in this case, loses and edge and allows Simon to gain straight forward entry into the zone.  But this was not the case for most of the night, particularly with 87 on the ice.

That can be seen in the next two clips:

Again, you have a lone forward in Clutterbuck applying some pressure to Schultz and Maatta before passing off responsibility to Cizikas as the two Penguins defensemen play catch.  Crosby and Co. break up ice, but the 3 across the blue line (Martin is over by the bench on Rust) and Clutterbuck dropping in to shadow Crosby and take that pass away, Maatta can only throw it up the wall for Guentzel to deflect into the zone, ending any threat of an attack.

Below, you have another glance at what the Islanders were doing.  Letang and Dumoulin collect a dump in from Murray, beat the Martin and Clutterbuck forecheck, but as soon as the puck enters the neutral zone, Guentzel is met with next to no opposition.

This is because, again, Cizikas got on his horse and dropped straight in to help his D.  Here, Guentzel gains entry into the zone, but is immediately cut off at the pass by Pulock, which allows Clutterbuck to come back and cover for him and clear the zone.

And, perhaps nothing is more indicative of this than what preceded Bailey’s shot off the post lats in regulation that nearly clinched the game.

Twice in as many tries, the Penguins top line was incapable of entering the zone.

First, it’s following Guentzel’s backcheck to win the puck back, setting Maatta and Schultz up to go D-to-D before Maatta breaks it out up the near wall.  Kuhnhackl, you’ll see, is on top of Rust to send it back the other way.

You’ll also see that as he steps up on Rust, he’s coming from that position of that 3rd player on the blue line.  You’ll also notice at the beginning of the clip that as soon as Guentzel is seen to have possession, Brock Nelson doesn’t even bother to go towards Schultz.

He drops in, content on being passive and clogging up the middle of the ice.

When Kuhnhackl is unable to collect the transition pass and Schultz outlets to Crosby, you see exactly what the Islanders did all game.

Bailey wants nothing to do with joining his comrades and trying to create a 3v2, instead dropping straight back to the blue line.  Crosby picks up the puck and cuts to the middle of the ice, but he’s left with one option here: try to do something heroic.

Neither Guentzel nor Rust are passing options and as Crosby hits the line, he’s completely enveloped by the Islanders swarm and allowing Bailey to cleanly clear the puck.

However, this is all beatable and the Penguins did have some success last night in doing so.  Immediately after Clutterbuck’s clearance in that clip that started early in the second above is what the Penguins need to do moving forward (and something the Malkin and Bjugstad lines had success doing).

Pelech, here, collects Clutterbuck’s airmailed pass, only to turn it back over to Dumoulin just inside the Pens zone.  Dumo sucks Martin in and beats him with a pass up to Rust, but the swarming forecheck almost undoes the Pens here had it not been for a quick Letang pokecheck.  With all 3 Islanders forwards trapped in deep, Crosby is off to the races, ending with a Maatta chance at the other end of the ice.

This quickness in transition is how the Penguins are going to beat the trap.  Because, as seen here, if they aren’t allowed to set up at the blue line and stagnate the play, the Penguins are able to create.

How Mike Sullivan adapts to this will be interesting the rest of the series.  Because the Penguins did have a lot of success when they were able to trap all 3 Islanders forwards in deep.

The Islanders played a very heavy, hardworking game, but also allowed the Penguins top line to make their own mistakes that the rest of the forward group really did not make.

And given who Sidney Crosby is, the safe bet here is that he won’t have another game like this the rest of the postseason.