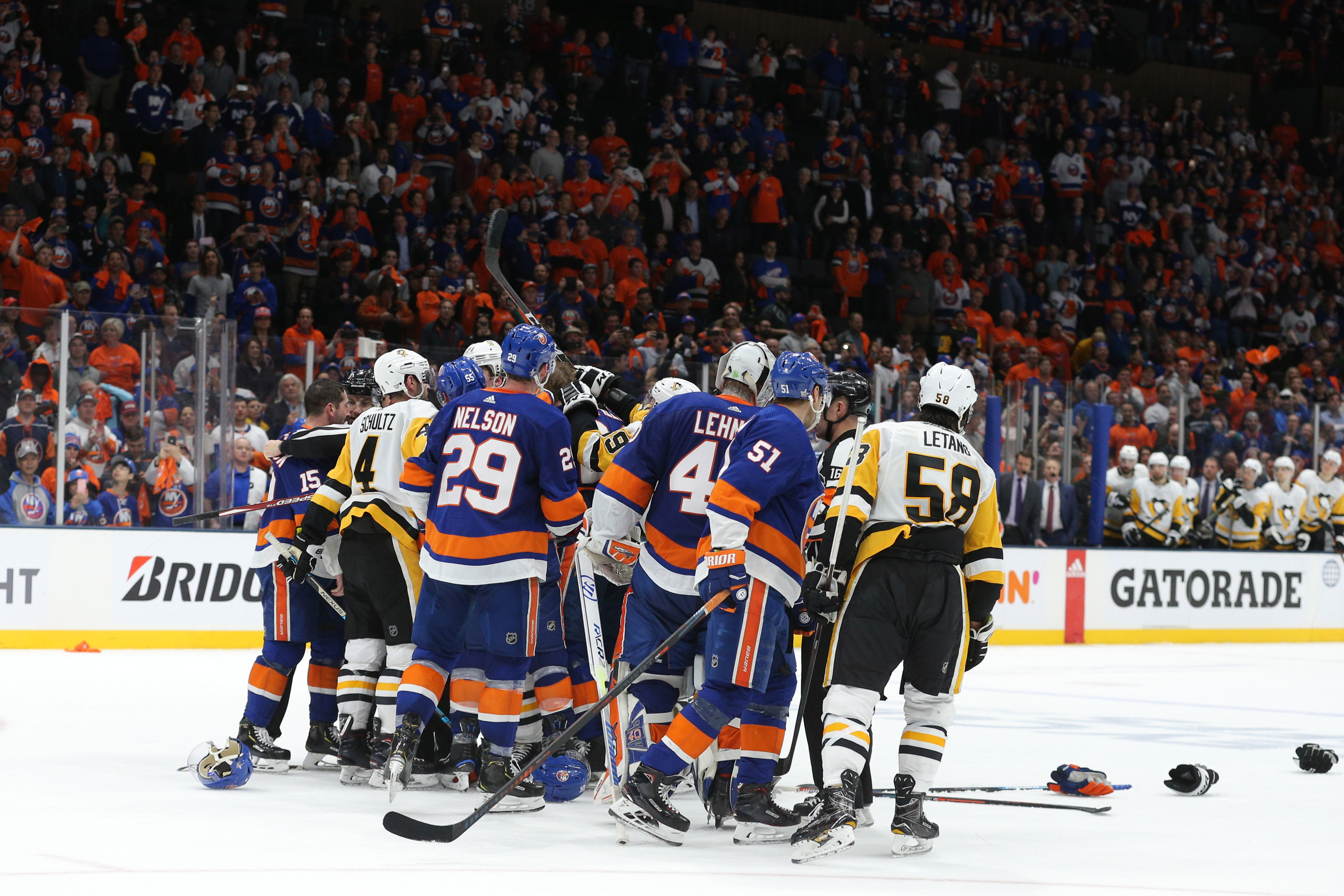 UNIONDALE, N.Y. — If anyone thought that the Islanders playoff inexperienced youngsters were going to be intimidated by the battle-tested Pittsburgh Penguins, all they had to do was look at Scott Mayfield after the final buzzer on Friday to see that quite the opposite was true.

There was the 26-year-old defenseman with just four playoff games under his belt — that’s including Game 1 and 2 of this series — mixing it up with Evgeni Malkin. Then giving NHL superstar Sidney Crosby a few shots while he was trying to peel Mayfield away from Malkin.

Then there was Mathew Barzal sticking up for himself against Marcus Pettersson after Anthony Beauvillier tied the game. And of course, Beauvillier rushing to the aid of Barzal after he was caught on the wrong end of a three-on-one in a scrum after the second-period goal.

“I think anytime you play a team back-to-back and you know you’re going to get them possibly seven times as the series goes on you’re going to have those in-game battles with guys,” Barzal said. “That kind of stuff is part of it. We have some big guys on our team and what not, so kind of been playing like that all year. It’s nothing new to us. that’s just the nature of a playoff series.”

But the physical nature the game took and the role the younger members of the Islanders roster took in it shows part of how those players have jumped into the postseason head first without showing any nerves. Mayfield had two playoff games under his belt when the series began, but Barzal, Beauvillier and Devon Toews had been making their postseason debuts.

Even rock-solid veteran Robin Lehner only played in two playoff contests until this year.

Yet none of them have missed a beat. Barzal has four points through the first two games of the series, and had a big hand in the game-winning goal in Game 1. Beauvillier’s goal in the second period tied the game at one.

Toews has been a steady hand on the Islanders blue line and nearly had a goal of his own in the first period, but rang a shot off the post. Lehner has been the same rock in net that he had been during the regular season.

“They’re both young guys and this is a fabulous experience for them in this atmosphere and against a great team like Pittsburgh,” Islanders coach Barry Trotz said. “And the type of game that it is. You have to fight for your inches and all that. That’s just great for their growth.”

There has been plenty of enjoyment so far for the young Islanders. Beauvillier spoke glowingly about the experience of Game 1 ahead of Friday’s contest at Nassau Coliseum.

It took one shift for the nerves to come down on Wednesday, but they only came down a little.

“You still have it. The adrenalin kicks in and you don’t want to make any mistakes,” Beauvillier said. “You want to make the right play every time. Every play counts and you just want to do the right thing out there. It’s just a lot of fun.”

He added: “Just playoffs, you play hockey just for those moments.”

Beauvillier certainly had his moment in Game 2. Coincidentally, it had been Barzal who had talked about harvesting the nervousness and using it in a positive way.

So far for Barzal, he said it’s just playing hockey and not letting the stage get the best of you.

“I’ve played on big stages before and done alright,” he said. “The intensity of it isn’t really new, but obviously not making it last year and not playing in too many big games since. Just nice to get that feeling back and that intensity back. I love playoff hockey.”