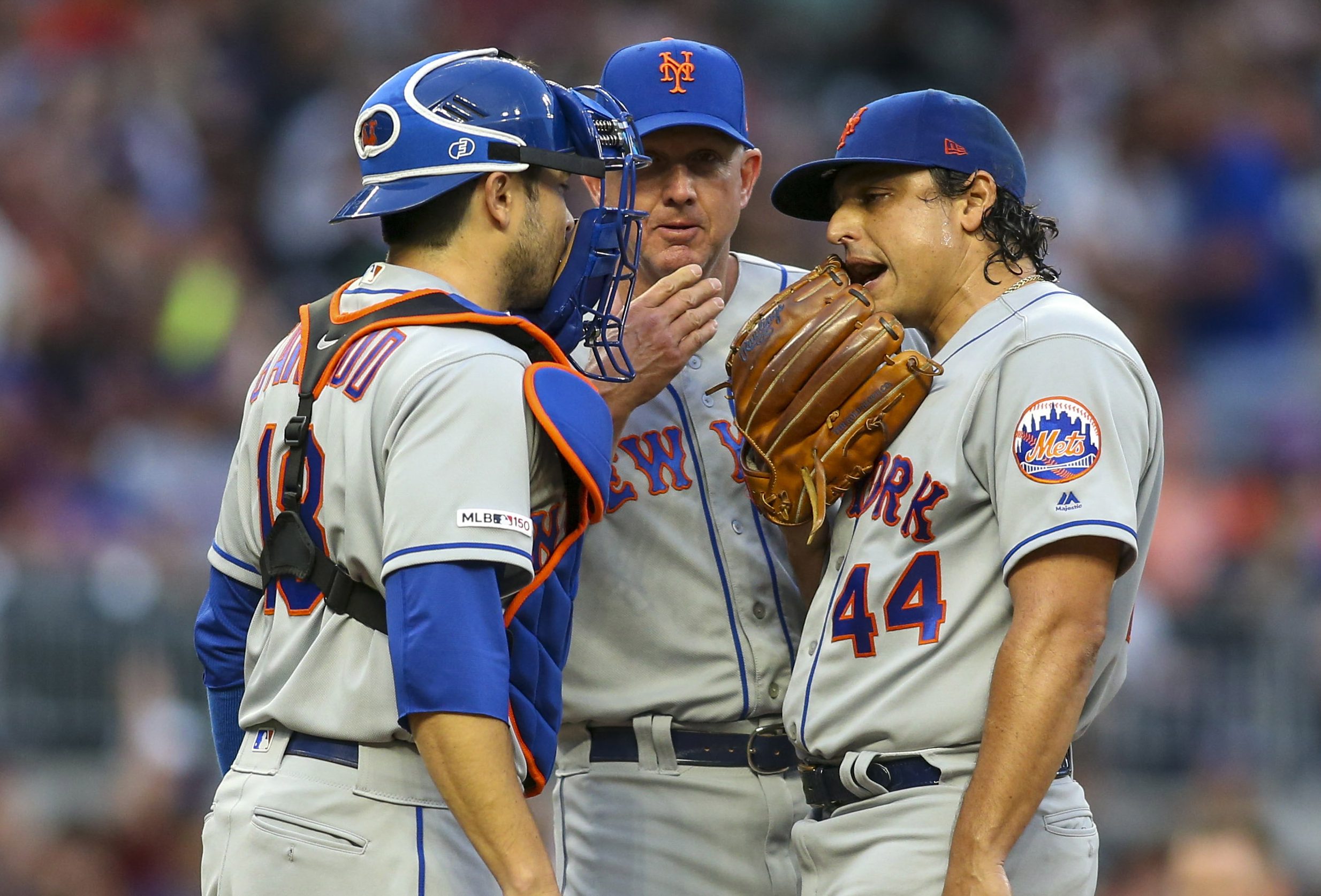 I guess the Mets finally experimented with the opener.

If only that were true.

So it was mildly annoying when Mickey Callaway basically warned to us that Jason Vargas was nothing more than a five inning pitcher. Fine. We’ve been spoiled into thinking that all five starting spots are supposed to be filled by aces anyway. Five innings? Okay, whatever.

But fifth starters aren’t supposed to come in and get one freaking out. I mean … openers laugh at that. That’s what Jason Vargas did tonight as he got a quick hook after 36 pitches and (eventually) two runs. Vargas got squeezed on a few pitches, yes (and Mickey Callaway got ejected arguing that case). But not even Angel Hernandez could squeeze a five inning starter into leaving after one out (but if anyone could do it …).

The sad part of it is that the Mets made up Vargas’ first inning deficit immediately, scoring four runs of their own in the second after Corey Oswalt came in and gave up two more runs in the bottom of the first. The Mets even knocked out the Braves’ starter Sean Newcomb, giving both starters a combined five outs (with Newcomb getting four of them.) But Oswalt gave up four more runs in the second to give the Braves an 8-4 lead while the Braves’ Touki Toussaint fared much better in his long relief outing to lead the Braves to an 11-7 win. But this didn’t come down to organizational filler making his season debut. This is about a guy getting paid $8 million dollars to get 15 outs every five nights, and on Saturday he fell 14 short.

If Jason Vargas can’t get anybody out anymore, fine. Nice career, congratulations on getting this far in the show. But it’s time for Brodie to do something. I really wish the Mets had found a way to sign Gio Gonzalez or  trade for Andrew Cashner, who hasn’t been completely horrible at the top of the Orioles rotation and would fit in nicely as somebody’s fifth starter. Is he Dallas Keuchel? No. Does he have an ERA of over twelve like the first three pitchers who pitched tonight? Not even half that.

Now the Mets are forced into a situation where it’s either sign Keuchel, or depend on the rest of the organizational filler to get you through the season, which puts a ton more pressure on not only the bullpen, but on the other four starters to go seven innings every night to take pressure off the bullpen. And if you sign Keuchel, you had better hope that a shortened spring training in Bringhamton or Brooklyn or Syracuse gets him back to Cy Young form, and be prepared to hold the fort until he gets up, which if the Mets were smart they’d make every effort to give Keuchel at least a month to get ready for the majors.

Even if you want to keep Vargas to be a part of the organizational filler backing up whoever you get, that’s fine. But something has to be done at this point. This season has shown enough promise at this early stage not to let it be torpedoed by a totally ineffective fifth starter, who it’s already been acknowledged will be skipped in the rotation when there are off days. This needs to be addressed sooner rather than later. The Mets went out and acquired 105 outfielders for depth, but nary a starting pitcher in the bunch. The pickins are scarce right now on the free agent market. but there is still one decent name out there.

I hate that Ron Darling is having health issues. Please get well soon and get back to doing what you love.