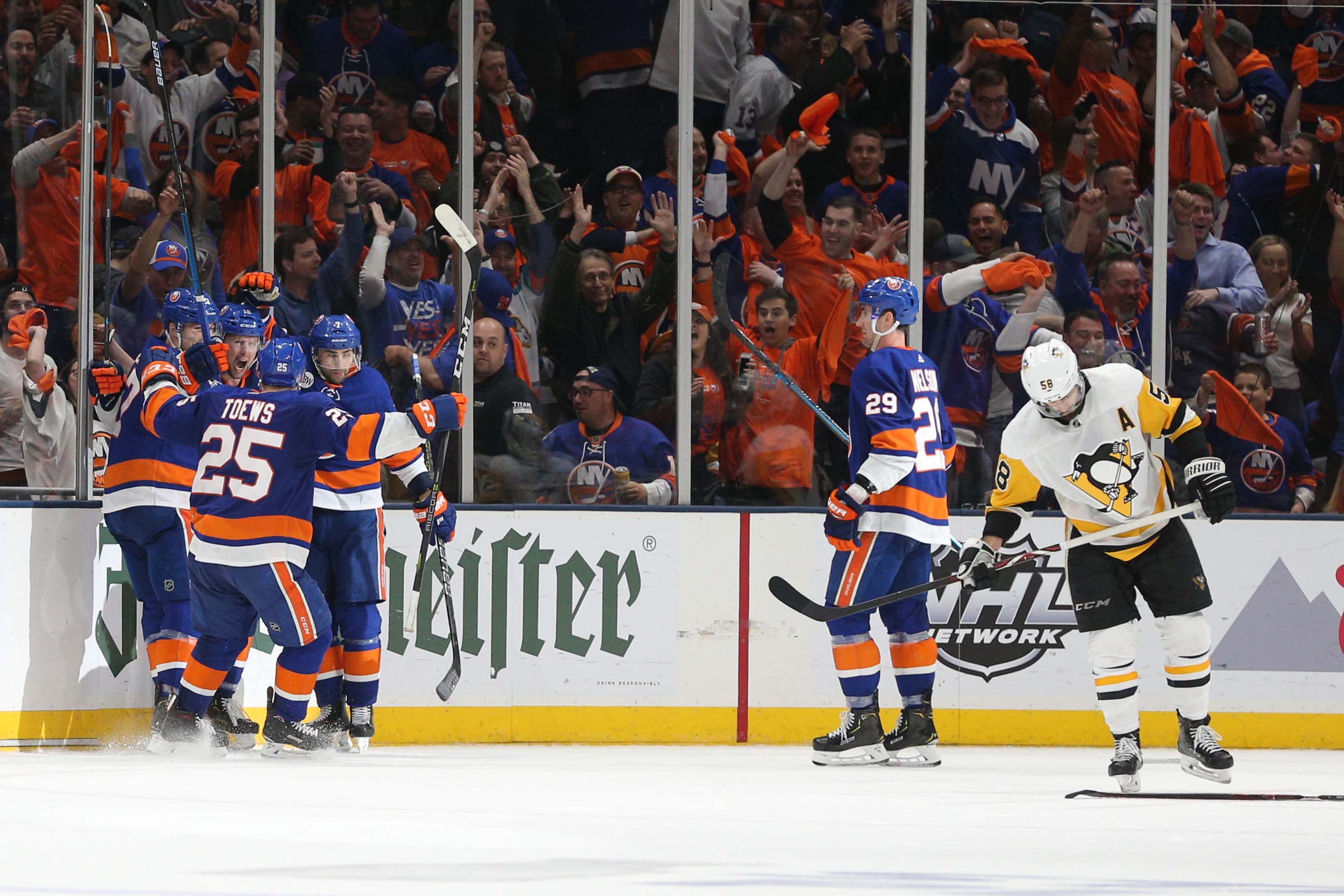 UNIONDALE, N.Y. — The Islanders have a 2-0 series lead in their first-round matchup with the Pittsburgh Penguins after Friday’s 3-1 win. Goals from Anthony Beauvillier, Jordan Eberle and Josh Bailey led the Isles to victory.

Josh Bailey is feeling the love

An incredible moment happened on Friday night just after the play stopped for a TV timeout. With 8:15 left in the third period, and just moments removed from Bailey’s power-play goal to put the Islanders up 3-1, the 13,917 fans in attendance sang “Hey, Josh Bailey, I wanna know, how you scored that goal” to the tune of DJ Otzi’s version of “Hey Baby.”

It was the second time in the playoffs that the fans rallied behind Bailey in song after a big goal. They screamed it late Wednesday night after Bailey, the longest-tenured Islander on the roster, scored the game-winning goal in overtime in Game 1.

“It’s special,” Bailey said when asked about it on Friday night. “It’s great to have that many people behind you. Definitely a feeling unmatched, for sure.”

The ever popular Josh Bailey song. #Isles lead 3-1 with 8:15 left in the game pic.twitter.com/h1qWpV1dHJ

The moment stood out for two reasons when you think about it. Bailey, who has played the sixth most games as an Islander in franchise history, has stepped up in a major way since the playoffs began.

The Islanders needed their top six forwards to put the puck in the net and as one of those guys, Bailey has answered the bell. While Bailey only recorded 16 goals in 82 games during the regular season, he has produced two of the biggest so far in the playoffs.

“With Bails it’s all IQ. He’s a cerebral player,” Islanders coach Barry Trotz said before the game. “He makes really intelligent reads. They’re more subtle. You have to watch him closely. If you’re just looking for the wow factor, you probably don’t see that in Josh. What you do see is all the subtleties and sort of the thinking man’s player.”

The other reason the moment stood out was just the way the fans have changed their tune about Bailey (no pun intended). Bailey has been one of the more polarizing players among the fans. But there was nothing but love for the tenured Islander the past two games.

Eberle and Barzal continue to be deadly for the Isles

For the second time in as many games, Jordan Eberle found the back of the net in a big way. On Wednesday it was to open the scoring after Tom Kuhnhackl had his goal overturned 33 seconds into the game.

On Friday, it was the eventual game-winner that came off the stick of the 28-year-old forward. And naturally, it was Mathew Barzal who had the primary assist.

The two have been clicking since they’ve rejoined one another as linemates, and that has only taken another step in the right direction since the postseason began. Both players have produced in Game 1 and Game 2 when the Islanders have needed it.

“They were really good,” Trotz said. “They’re attacking. They’re skating so well. they’re playing off each other. I thought (Eberle’s) goal was fantastic. He attacked space there and that was obviously a huge goal for us.”

If Game 1’s atmosphere at the Coliseum was great, then Friday it was absolutely electric in there from start to finish. Trotz took notice when the building quieted down in the second period of Game 1, but praised the fans following Game 2.

“They get an A+ from me today. They were outstanding,” Trotz said as the Islanders fans could still be heard celebrating the win. “Keep it up. I can hear you right now. The building is shaking over there. Fantastic. That’s what playoffs are about.”

The series shifts to Pittsburgh with Game 3 taking place on Sunday at PPG Paints Arena. While that building may hold 4,473 more people than the renovated Nassau Coliseum, it will be hard for it to come close to what Game 1 and Game to were like.

"I liked all of our effort. There's not one player I'm disappointed in, in our group. They left it on the ice emotionally and physically tonight." #Isles pic.twitter.com/2F3yC4qfDY