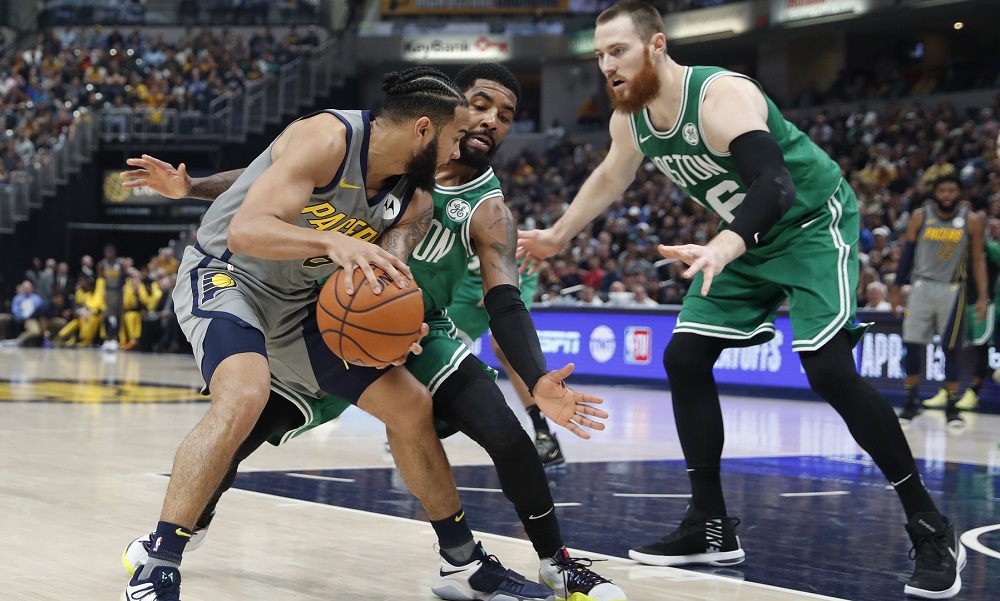 The Celtics have spent this season lacking focus, playing 40 good minutes and then losing games with eight unexpectedly bad minutes. That can’t happen in this series, especially in the first two games at home. Indiana has been a below-average team without Oladipo but does have impressive wins over Oklahoma City, Denver, and a pair of wins over Detroit the last month.

Although the Pacers don’t have any household names, they will be a formidable opponent because they lead the league in points allowed (104.7) and are tied for fourth (15.7) in turnovers forced. A sloppy Celtics team could invite trouble, extending the series to the limit.

“Just be great, it’s easy to do that,” Irving said. “I’m just glad we’re able to prepare for a team for multiple days. That makes it a lot better and just go out there and make plays within the game.”

Sounds easy, and the Celtics can make this a very winnable series if they come out with enough focus and fortitude from the beginning, understanding that sometimes things may not go their way. But they have more talent than the Pacers and more star power, so that should put them over the top.

Globe: Celtics can’t afford to take Pacers lightly in their first round

OK, Celtics, we’ve reached The Switch. Go ahead and flip it.

Most experts and observers think the Celtics will in fact flip that switch, at least in this first series. Nearly every prediction I’ve seen has Boston beating the Pacers in five or six games. And that makes me nervous, because over and over this season, we’ve seen the Celtics give away games and fail to meet expectations.

Sure, they’ve said for weeks that the playoffs would be a different story, that they’d play the right way. But talk is cheap – they need to actually make it happen.

I do think the Cs will take this first series; I just hope that the predictions and their 3-1 regular season record over the Pacers don’t lead them to take the win for granted. In a season of mistakes, that would be the worst one of all. However, if the team does get it together, they’ll build confidence for themselves and for the fan base that maybe they can, in fact, make noise in this postseason.

The Athletic: NBA Playoff Previews: Boston Celtics vs. Indiana Pacers  |  Beat writer crossover preview: Pacers ready to take their best shot vs. Celtics  |  Regretting mistakes of this year and last, Celtics enter playoffs with an uncertain ceiling  |  Meet the Pacers: Scouting what the Celtics must overcome in the first round

MassLive: NBA Playoffs 2019: Full NBA playoff primer to get you ready for day one of the NBA playoffs

Boston Sports Journal: Scouting report: Everything you need to know about the Pacers on offense

Without playing a game, the Boston Celtics had a tough day in New York on Friday afternoon, striking out on three tiebreaker scenarios in the 2019 NBA Draft before getting half-good news on the fourth.

The lone bit of good news for Boston came at the end of the drawing, when the Grizzlies didn’t land at No. 9. The Memphis pick is protected from 1-8 in the lottery this season, and the protections fall to 1-6 next year before falling away entirely in 2021. For that reason (and because four first-round picks is an excessive number for any team), Boston would prefer the Grizzlies pick didn’t convey.

That pick now has a 42.6-percent chance of conveying at No. 9, 10, 11 or 12 — not nothing, but certainly better than the alternative. Boston acquired the Memphis pick in a trade for Jeff Green in 2015.

That was the silver lining for the Celtics. They had some bad luck with their other tiebreaker picks. Most notably, the Sacramento Kings lost their tiebreaker to the Charlotte Hornets and Miami Heat. As a result, the Kings pick has the worst all the lottery odds. The Celtics would have had a 4.8 percent chance of getting a top-four pick no matter where that pick landed, but they could have had a chance to pick 12th or 13th if they hadn’t finished last in the drawing.

The Celtics also lost a drawing to the Thunder to have the 21st pick. Instead, the Celtics will own the 22nd pick.

The draft lottery has a tradition of being unkind to the Celtics. In 1997, they won only 15 games and had two chances to finish first and draft Tim Duncan; instead they got stuck with picks nos. 3 and 6. In 2007, they had the second-worst record in the league and might’ve been able to draft Kevin Durant, except they fell all the way to no. 5.

If nothing changes in the lottery, the Memphis pick will remain no. 8, which is preferable, as explained above. But… if even one team currently at 9 through 14 jumps ahead when the ping pong balls fall, then Memphis will get bumped down one spot and Boston will get a fourth pick this year that they don’t really want or need.

The absolute worst-case scenario (which I’m almost afraid to think about) is if Sacramento wins the lottery and moves from no. 14 to no. 1. That would push Memphis down and convey that pick, while also invoking the top-spot protection for the Kings pick – which then would go not to Boston, but to Philadelphia! The Celts would receive Philly’s pick, which is no. 24, while the Sixers would be able to use the Kings’ pick to draft Zion Williamson. There’s only about a 1% chance of all that happening, but we know what Lloyd Christmas would say about that.

And, finally… Griffin to NOLA

The Celtics, plus talented young players, plus draft picks, plus a willingness to part ways with those players and picks, equaled a potential summer blockbuster.

And then the Pelicans went out and reportedly set themselves up to hire David Griffin as their general manager, throwing off the calculus for a deal involving Davis.

Because with Griffin running the basketball show now, the Celtics and every team interested in dealing for Davis have to re-think the route to take in acquiring him.

Griffin has had experience trading with Danny Ainge and the Boston Celtics. He and Ainge were part of a three-team deal that sent Tyler Zeller and a first-round pick to Boston. The Celtics also acquired Marcus Thornton from Brooklyn.

This was a significant trade because Ainge helped Griffin clear enough cap space to sign LeBron James as a free agent. Front offices with strong prior working relationships are known to work together on future trades. While they obviously have to get the best deals they can for their own franchises, they are more likely to trust a front office that has worked well with them in the past. A prior relationship between Ainge and Griffin doesn’t hurt the process.

When Ainge stepped up to help the Cavs Make that Zeller/Thornton deal, many Celtics fans asked, why help Cleveland clear cap space that would enable them to bring on LeBron James? This is why. And if the Ainge-Griffin working relationship helps land Anthony Davis, it will be another example of Danny playing the long game and his ability to think several moves ahead of the competition.

Herald: Gordon Hayward impressing Celtics with his game — and his character  |  Terry Rozier yearns for a fresh start

Boston Sports Journal: Which version of Terry Rozier will emerge this postseason?

USA Today: Gordon Hayward: Celtics ‘can win any game against anybody’