R1G3 RECAP: On The Brink. Pens Fail at Home 4-1; Find Themselves on Brink of Sweep 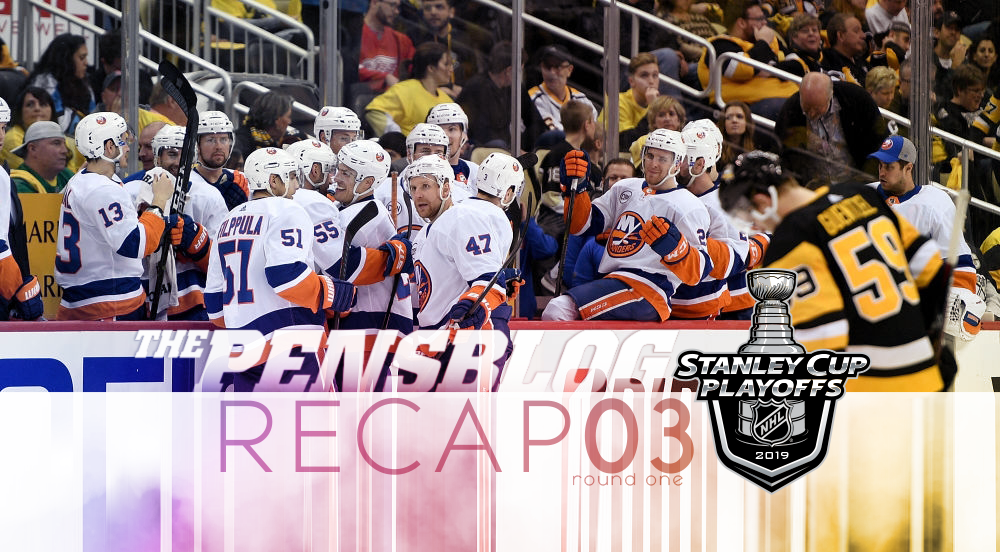 R1G3 RECAP: On The Brink. Pens Fail at Home 4-1; Find Themselves on Brink of Sweep

The Penguins have a lot of questions that need answered this offseason and the first has to be “How in the fuck were we not good enough to beat the Islanders?”

The answer is, obviously, because the mentality and focus shifted away from what got them 2 straight Stanley Cups to whatever the hell this is, but getting back to what got them to the summit seems long lost.

At any rate, it’s 3-0, the brooms are getting dusted off, and the Penguins are 1-7 in their last 8 playoff games.

since taking a 1-0 lead against the Capitals last season, the Penguins are 1-7 in their last 8 playoff games 😐

No matter how you slice it, no matter optimistic or pessimistic you are, there’s no clawing back from this.

But hey, at least we aren’t the Bolts…

Trickery in the final moments before Game 3.

JARED MCCANN IS OFFICIALLY IN THE LINEUP!

Teddy Blueger will be out. https://t.co/C8p4WsuHgS

With the series at stake, HCMS got a temporary pregame boost with Jared McCann being able to get back into the lineup as the lone player change from Game 2, replacing Blueger in the skirmish.  On top of that, the best boy Simon got that reunification job with Guentzel and Crosby, while McCann and Hornqvist got duties on Malkin’s flank to start.

Both teams came out soaring with the Pens being led by Crosby doing the damn thing and leading the charge from his opening shift, setting Guentzel up on the back stick right off the hop.

Took some time and some bullshit but, finally, the Penguins got their even up call they never got in Game 2 when Adam Pelech went off for holding Simon at the 10:35 mark, but the Pens had a lot of issues just getting shit going, generating 0 shots across the two minutes.

Immediately following the penalty expiration, the 4th line for the Pens took to the ice to replace PP2 as Guentzel and Simon got it started with some nice board play.  Wilson jumped on for Money Bag and went straight to the net after Simon and Cullen dug it out to Jultz.

Boychuk looked like he had body position on Wilson, but as Pettersson’s shot came in, Wilson threw his stick out there to get a wicked deflection down and by Lehner to open the scoring.

PPG was rocking, but that lead lasted all of 28 goddamn seconds.

The Islanders top line, out on the ice for an offensive zone draw, saw Barzal win the faceoff over Crosby for a Pulock shot attempt.  ZAR latched onto the loose puck and had a chance to clear, but it was Barzal wildin’ to jump in, steal the puck, and exchange it with Eberle down low.  As soon as Eberle gave it back to Barzal, he ghosted in behind the net and popped back up on the far post.

All of the attention was on Pulock at the point with the puck and exactly none of it was directed towards Eberle, who was found with a bullet pass from Pulock and absolutely ripped one top shelf on Murr.

That’s just one hell of a shot.  Murr has the post covered, but the postage stamp of area in the top corner was all Eberle needed to tie this up.

And that 1-1 score lasted all of 62 goddamn seconds.

Crosby’s line was sent back out there to dominate and that’s exactly what they were doing down low, but when a clearing attempt bounced off the boards and into 87’s feet, the Isles saw their chance to strike.

Crosby got swarmed by Kuhnhackl and Nelson, both of whom ended up getting the puck out of the zone.  Cue Justin Schultz with a pinch so bad that sadomasochists were lining up to pay it to jerk them off.

With only Johnson covering in behind, Nelson was off on a 2v1, looking off the pass and ripping on by Murr stick-side.

Ultra deflating, but the Pens did have a 3v1 to close out the period as Jake, Sid, and Dom walked in on Nick Leddy, but you know how this ended: with Jake waiting out Leddy, but putting the pass in Dom’s feet.

the penguins post season summarized in a gif pic.twitter.com/Ao3hxr6kJf

As you’d expect, the second period opened with everyone arguing over Simon not being able to score with a pass in his feet and for getting his stick lifted on a chance just before that, while the Islanders forechecked the Penguins to death.

But Sidney Crosby was putting the team on his back just before ValFil went off for hooking up ZAR 8+ minutes into the period.

Sidney Crosby is not a human being part 2389472938472 but Guentzel is drunk apparently pic.twitter.com/Nmk0AMr3v9

Two minutes after the Isles got that kill, they went back to work swarming the Pens in their own end of the ice, eventually getting Rust to take a tired holding penalty to give them their first man-advantage of the afternoon.  It would become a 5v3 for under a minute after Johnson got rung up for holding the stick after a HUGE Murray save on the doorstep.

Just after the 5v3 became a 5v4 again, though, Barzal got hit with a tripping penalty to negate the rest of the powerplay and give us under a minute of 4v4 time before the Pens got 1:14 of a 5v4 of their own.

Momentum, engage.  And the Pens were flying, but they just could not buy one on the PP, after the PP, or at any other point in the middle frame.

Shutdown city for the Isles, forcing the Pens to be one and done in the offensive zone for the entire period (when they were even able to get into the zone).

But then the Jack Johnson Show kicked off and on two separate shifts, killed the Penguins.  On the first one, he tries to kill Cal Clutterbuck instead of forcing him into the boards, allowing Clutterbuck to just dummy him and feed Cizikas all alone in the circle.

Johnson followed that up on that same shift but proceeding to lose Clutterbuck as Cizikas ran the show behind the net, feeding him on the back side for Murr to commit another highway robbery.

But on Johnson’s next shift, he was not so lucky.

After the Penguins got the puck out of the zone, he stepped up at the blue line to break up a bouncing pass, but was a little unfortunate to have it stick to ValFil instead of his partner.  That wasn’t the problem.

The problem was as Filppula skated towards the boards, Schultz and Cullen followed.

Watch Beauvillier here.  He cuts through the slot and in front of Johnson.  Beauvillier is not a threat here.  He’s a left hand shot skating away from the goal.  If Filppula forces a pass to him there, Cullen, who’s peeling back towards the net, pokes it off of his stick and we’re on our way.

Johnson, though, follows Beauvillier.  That quick stride in Beauvillier’s direction left the eventual goal scorer, Komarov, all alone on the back post to take the deflected pass and beat Murray.

There are no two ways around this.

Pens were dead to rights, couldn’t get dick going against the 1-1-3, and that’s that.  Couldn’t even score with the 6v5, but Anders Lee did to eliminate all doubt.