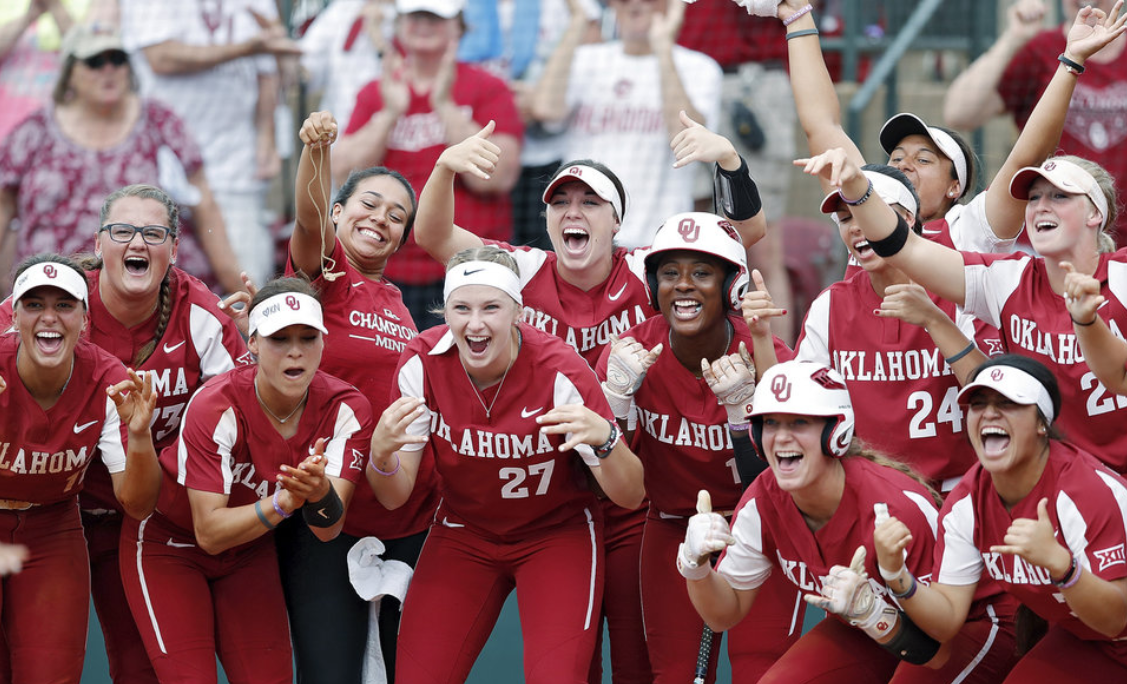 There’s going to be a huge Big 12 showdown in Texas on Thursday when the Sooners and the Longhorns do battle on the softball diamond. For the first time in six weeks, a new leader has emerged in the latest NCAA softball polls, and that team is none other than the Oklahoma Sooners.

With longtime leader UCLA dropping to No. 2 after an April 12 loss to unranked Oregon, Oklahoma was able to take home the nation’s top ranking. Oklahoma, one of the most dominant offensive teams in the county, moved into the No. 1 spot after UCLA’s loss, and the Sooners hold a similar 38-2 record with its two losses coming against Florida State and the now No. 2 UCLA. The team has also shut out its last five opponents and will face No. 11 Texas in its next series on Thursday. Oklahoma won the Women’s College World Series in 2016 and 2017 and will be chasing a third title in four years this spring. UCLA has not won a College World Series crown since 2010.

The Longhorns will pose a tough challenge for the Sooners.  Texas has been notoriously difficult to beat at home.  They have solid pitching and their offense has been on fire lately as the largest average margin of victory in the NCAA.  Unfortunately for Texas, the Sooners also know how to hit the longball and lead the NCAA in both home runs and RBI’s.  The college sports betting lines have Oklahoma favored in this game by one run, and are +120 on the money line.  That’s all for a good reason. They are the top ranked NCAA softball team after all.

The UCLA Bruins suffered just their second loss of the season during that game, falling 4-3 to the Ducks and bringing their runs-against total to just seven for the year. UCLA responded to the loss with two sequential wins against the Ducks to end the series 2-1, and the team still tops the nation in win-loss percentage, earned run average and strikeout-to-walk ratio.

The Bruins, now 37-2, will play a series of unranked NCAA teams in Oregon State, Utah and Stanford for the remainder of the month before meeting No. 7 Arizona for a late-season series in May. Wins against the first three teams will be necessary for UCLA to maintain a top seed heading into the conference tournament, and wins in the Arizona State series could be enough to erase the Oregon loss from the minds of the No. 2 Bruins.

Within the Top Five, Florida State also found itself moving down in this week’s poll after suffering a loss, like UCLA, to an unranked opponent over the weekend. Unlike UCLA, however, the Seminoles couldn’t rebound immediately from the defeat and ultimately dropped the series to North Carolina 2-1. In the final game of the series, the Tar Heels shut out Florida State for their 11th shutout win of the year. The Seminoles have only been held scoreless once before this year, falling 2-0 to Louisville on April 6. Florida State will play No. 6 Florida next in an inter-state top-10 rivalry game that pits the fiery Gators against the motivated Seminoles. Florida, which swept its weekend series against Texas A&M, rides a seven-game winning streak, with its most recent loss coming against none other than Florida State. The outcome of this upcoming series will no doubt shake up the national rankings. Both teams still sit atop their respective college conferences, but this game will feature two powerhouse programs and will still be a can’t-miss showdown.

Washington took the third spot in the poll in place of Florida State after sweeping its series against Arizona State and extending its winning streak to 13. The Huskies last loss came on March 17 to UCLA. Alabama rounded out the Top Five after three consecutive wins over Georgia. Florida, Arizona, Tennessee, LSU and Louisiana rounded out the Top 10, while Texas, Texas Tech, Oklahoma State, Auburn and South Carolina snuck in the Top 15. South Carolina is the only team in this group to move into the Top 15 since last week with the remainder of the teams holding steady. Arizona, Tennessee, Oklahoma State and South Carolina each rose one spot from last week while Texas Tech rose three. Arizona’s rise likely came as a result of the Wildcats’ dominating performance against Utah in which the team swept the Utes with a combined 48-3 score over three games. The Wildcats moved to a 35-7 record with the wins.

In addition to the movement within the Top 15, newcomers Northwestern and Colorado State joined this week’s rankings at No. 23 and No. 25. Colorado State has not been ranked since 2008, while Northwestern enters the list for the first time since 2014.