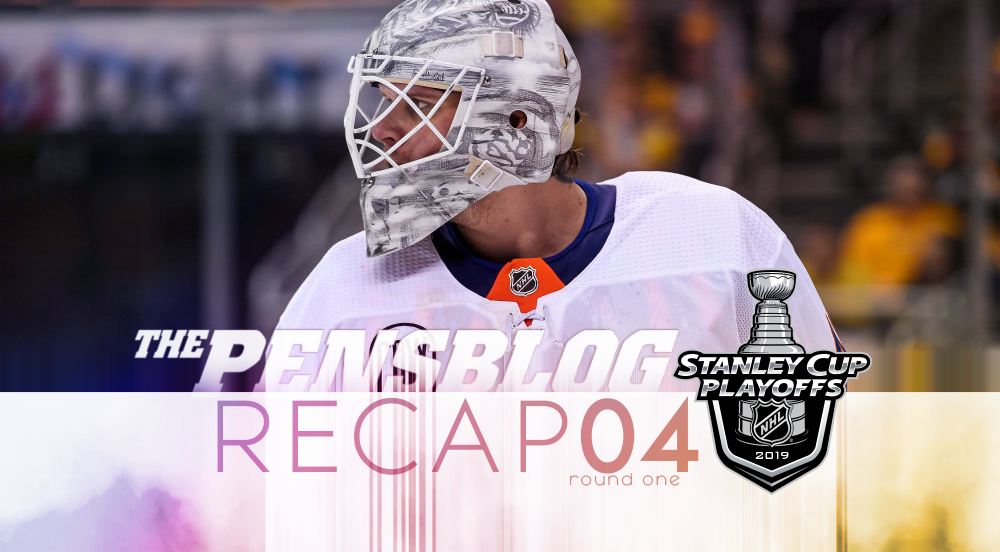 For the 9th straight time, the Penguins scored the first goal in a home playoff game against the Islanders.  For the 5th time in those 9 game, they lost.

But you already knew that, right?  You probably already feel those traumatic memories of 2013 washing over you again,  You know that series, where the Penguins managed just 2 goals?  Well, for the 2nd time in Penguins history, they managed to score fewer than 7 goals in a series.

But you probably got that sense already, too, right?

Everything is better now.  It’s over.

Because with the Penguins going out with a whimper, this is where the real shit starts.

You’ll hear talk radio hosts talking about trading Letang over a couple of bad moment, while the likes of Jack Johnson get a pass.  You’ll hear about Phil Kessel being moved for cap reasons, despite being one of the 6 players to score goals for the Penguins, equaling the team-high totals of Garrett Wilson and Erik Gudbranson (1).  You won’t hear many people hold Jim Rutherford accountable for any of his missteps since the 2017 Cup, either.

What you also won’t hear is anyone showing any perspective, like how the Penguins have won 21 more playoff games than any other franchise since 2005-06.

I’ll admit that us Penguins fans are unbelievably spoiled. Playoffs for the last 13 seasons, 3 Cups in the last 10. Some of the best players in the league on the team. Sucks to lose but can’t win ‘em all.

With that said, no one talk to me. Fuck everyone and everything

Enjoy the rest of the playoffs.  There’s a lot of great hockey to be played.

There’s going to be more than enough time to eat each other this offseason.  Let’s not burn ourselves out on Day 1.

For the second must-win game in a row, HCMS rolled out the exact same personnel lineup as Game 3, choosing to mix his lines up again up front.  Johnson, after two horrid games, stayed though for reasons unknown though.

And just 35 seconds into the game, the Pens looked like they were going to do the damn thing.

Big D zone block from Letang to get it all started.  Watch the subtle little play he makes to not only block it, but direct his block over to Guentzel to spring the exit.

Pens slowed it down, but Dumo was able to move it up to McCann for the chip in behind to Crosby winning the race.  McCann followed it up by causing chaos and away came Guentzel with the puck, moving it from low to high.  The Pens were prodding, but again it was a Letang play that made this goal happen.

Watch his pinch down the wall after Dumoulin’s point shot.  He continues to hold the wall even after the Islanders gain possession, prohibiting them from clearing it out while Crosby did some hounding.  McCann lurked too, eventually picking it off and getting it back to Crosby in the corner.

With the focus being on Crosby, it meant no one was picking up Guentzel up high, who was covering for Letang at the point.  Bang.

But it all came undone just 1:34 later, as has been the case with every lead the Penguins got this series.

This time, the pinch down the wall did not work for Letang, which is eXaCtLy WhY y0u TrAdE hIm.

The Pens were dominating the offensive zone prior to this, but as it kicked out to Letang at the point, he tried to skate it by Mayfield instead of chipping it to the corner.  If he makes this play, the Pens have numbers down low and possibly a 2-0 lead 2 minutes into the biggest game of the season.

Instead, luck wasn’t there and Mayfield gets his stick in, disrupting it and sending Barzal and Eberle in on a 2v1.  You know what villain was scoring this.

“We were all caught in, four guys at the blue line. I tried to put it deep and get in there. It was more of a clusterfuck. I don't know what really happened. Guys ran into each other or something.”

Isles nearly made it 2-1 right after that and just before the Pens got rung up for too many men after Gudbranson gave it away behind the net, but Murr got out on top of his crease to turn away the point blank Cizikas shot.

Pens survived, then ended up getting a powerplay of their own with 5:31 to play after Barzal tried to chop Dumoulin in half in the Pens corner.  Instead of punishing the Islanders, the Pens chose to take a dump in the Allegheny.

Here's Barzal's two hand slash to Dumoulin's bicep. Dumo was giving him the business down low, but you cannot swing your stick like this regardless of what body part it connects with pic.twitter.com/tmncLGfH5P

Just knew that if they didn’t score there, the Islanders were going to and send the Penguins went into the first intermission down a goal.

The goal itself only took about 5 seconds, but watch the entire 30 seconds preceding the goal here.  It’s this series in a nutshell.  The Pens get the puck in their own zone, get swarmed, and just chip it out into the neutral zone for the Islanders to send it right back down their throats.

And on the 4th dump in, Kuhnhackl is risen, burying Pettersson for Bailey to swoop in and collect the freed up puck.  Instead of Gudbranson going to the front of the net and protecting the highest danger area, he and Pettersson both chase Bailey and no one picks up Nelson on the back post for the tap in after the pass slipped under Murray’s outstretched stick.

The Pens opened up the 2nd period with some higher end chances with one coming from a high tip from Hornqvist and another coming from McCann loading one up on the backpost after taking a Guentzel cross-ice feed, but folks, Lehner wasn’t being beaten.

And even when Lehner was beaten just before and during a Pens powerplay midway through the period, the puck wasn’t beating the post.  It was batshit insane.

These are not the same two chances.

On brand with the batshit insane stuff was Patric Hornqvist as the penalty expired, who literally tried to fight Robin Lehner to get the team going or something.  If that ended up being what got Lehner off his game, you could give Hornqvist the Conn Smythe tomorrow.

But what that meant is that the Penguins had to go and kill a penalty to try to save their season and save their season is precisely what Matt Murray and Kris Letang did, albeit temporarily, even if Erik Gudbranson had other plans.

And that’d be it for the period.  Crosby had the motor going, but they couldn’t solve Lehner.  Twenty minutes left in the season.

With the season on the line, HCMS reunited Simon with Crosby and Guentzel.  Go with what usually works, ya know?  And with that trio living in the offensive zone, Crosby went to the front of the net after a Guentzel chance to draw a penalty and put the Pens on the man-advantage 5:55 into the period.

You just cannot make this up. What a save from Mayfield to deny the Penguins the equalizer pic.twitter.com/KkimjK9aIK

Immediately after, the Islanders got a chance to both kill off the game and kill off another 2 minutes of clock as Bjugstad got hit for tripping.  Got the kill with 10 minutes left in the season.

Ninety seconds left.  Murray out of the cage.

Big changes are coming this offseason.  Get some rest.  Then buckle the fuck up.