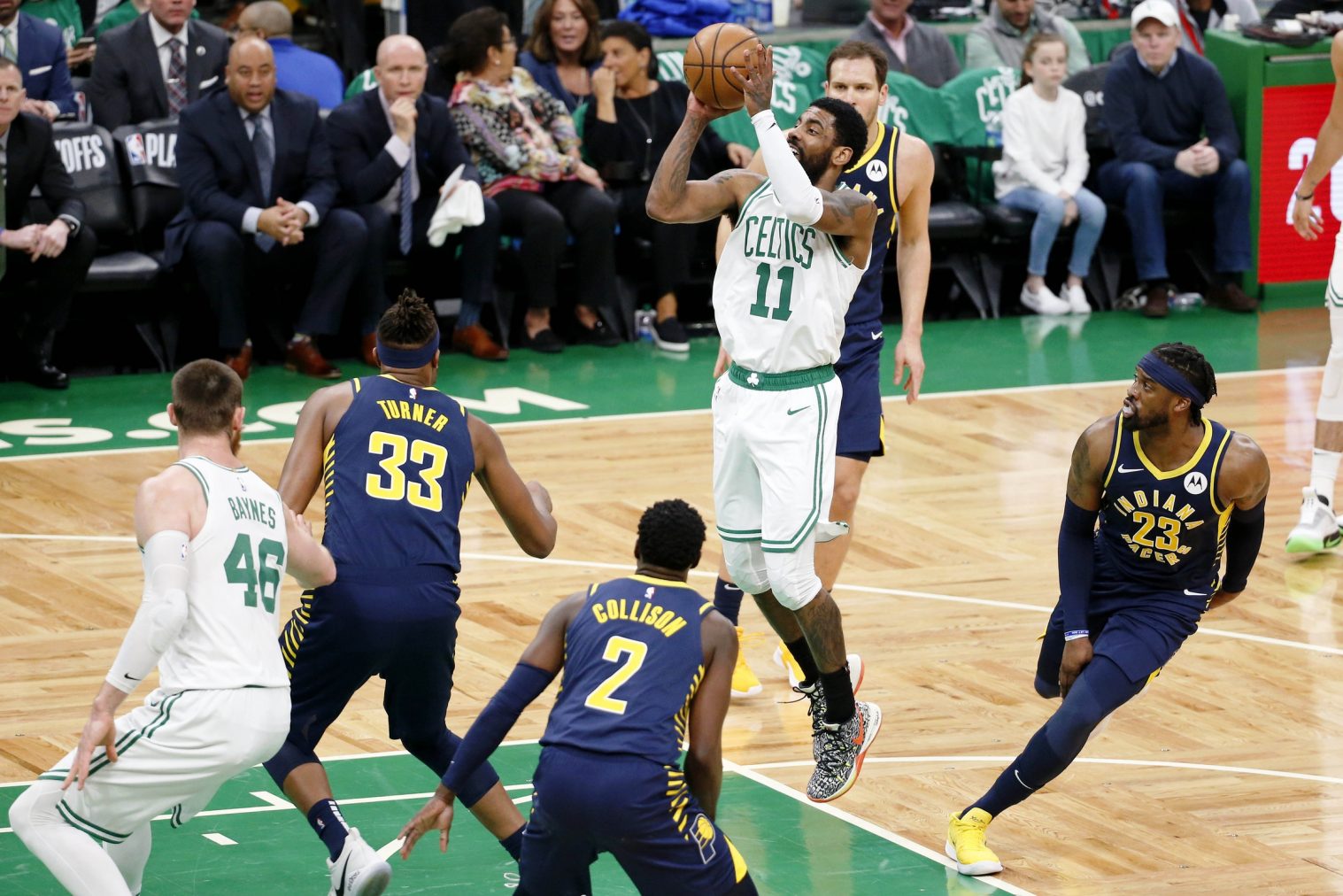 IN A NUTSHELL
There’s a brief scene in Martin Scorsese’s film Gangs of New York in which an illegal bareknuckle boxing match ends with one shirtless, heavyset and exhausted man knocking out his equally shirtless, heavyset and exhausted counterpart, throwing a knockout to win the fight in the 75th round. The first playoff game between the Boston Celtics and Indiana Pacers was a lot like that, in which both teams played hard and not good but Boston won the grindfest with tighter defense and less awful shooting.

This one was a little different. Shots landed more regularly for both teams, and for much of the game it looked like things were going in the Pacers’ direction—long stretches with a double-digit lead on their part. But superstar performances by Kyrie Irving (37-6-7-1-2) and Jayson Tatum (26-4-2-1) overcame Indiana’s grindhouse team effort and an out-of-his-head Bojan Bogdanovic team to earn the Celtics a 99-91 win and 2-0 series lead.

WHAT WENT RIGHT
Offense! Made baskets! There were considerably more of them in the early going of this game than there were on Sunday afternoon.

What went right the most in this game was Irving and Tatum, for their ceaseless outstanding effort on both sides of the floor. Irving may never be the sort of two-way guard that, say, peak Chris Paul was or Kyle Lowry and Klay Thompson currently are, but he’s playing the most brawny physical basketball of his career now alongside his well-established elite.

Tatum has shown strong defensive acumen since day one, marred only by totally understandable rookie mistakes at various moments. And while Irving’s blitzkrieg run in the mid-fourth gave the Celtics the necessary momentum, Tatum put the squad on his back in the contest’s final minute. With a three, a crucial assist to Gordon Hayward (who had quiet but essential contributions all night) and a brutal dagger dunk in the final nine seconds, he made yet another argument against being traded for any reason.

(Also let’s be honest: Indiana lost that game as much if not more so than Boston won it, thanks to hideous turnovers that were largely the fault of Myles Turner.)

WHAT WENT WRONG
Unfortunately, Indiana’s offense was also much better than it had been in Game 1. It stayed strong past the halfway point into the third quarter, in which Boston’s shotmaking faltered considerably. It only wilted in the fourth, coinciding with Irving’s assumption of murder-takeover mode.

The Celtics having a lot of trouble with Thaddeus Young, who at best is slightly above average, is troubling, his facility for steals in this series even more so (five in Game 1, three in game 2). And the less said about the onslaught of Bogdanovic, the better. (I’m way more partial to Bogdan, on the Sacramento Kings.) But despite the 2-0 lead I ain’t writing the Pacers off just yet. They’re still pretty good even without Victor Oladipo.

WHAT THE HELL
Kevin Harlan is on play-by-play for the TNT broadcasts of this series’ games, as well as Brooklyn-Philly. In Game 2 of the latter, he made one of his obligatory ad reads a lot more interesting:

I might just buy an Angry Whopper based on Kevin Harlan's read pic.twitter.com/FmBRKaHJ8B

His scream of “ANGRY WHOPPER!!!!” in the meth-snorting-pro-wrestler voice he usually reserves for talking about dunks by Birdman Andersen is a reminder of why Kevin Harlan is a national broadcasting treasure. I hoped we’d get another one tonight, but ’twas not to be.

Lest this be mistaken for some subtle Burger King promo: They are literally the worst brand in an already bad industry, their executives’ souls are dogshit and every single fuckin’ thing about them is ugly. (Points if you get the movie reference buried in that diatribe.)

The defense-into-offense sequence below, starting with Horford’s block (fighting off an arm laceration!) and ending with Tatum sinking a wide-open trey, is peak Brad Stevens-era Celtics basketball.

Tonight's Play of the Game is a spectacular glimpse at the team-oriented play that stole the game away from Indiana late in the fourth! pic.twitter.com/PxrYCplGxb

A few minutes earlier, Kyrie retaking the lead with a center-court trey:

WE REPEAT, KYRIE IS 🔥🔥🔥🔥🔥 pic.twitter.com/2SlBKPyxqc

TATUM BRINGS THE CROWD TO ITS FEET! 🔨🔨🔨 pic.twitter.com/mpSyepXH8j

Tommy Heinsohn’s reaction to the turnover that eviscerated Indiana’s last hope of stealing a W:

Tommy: Here's one of the greatest plays of all time