Good Times in Goodyear: One Week Down for the Red, White, Blue and Gray 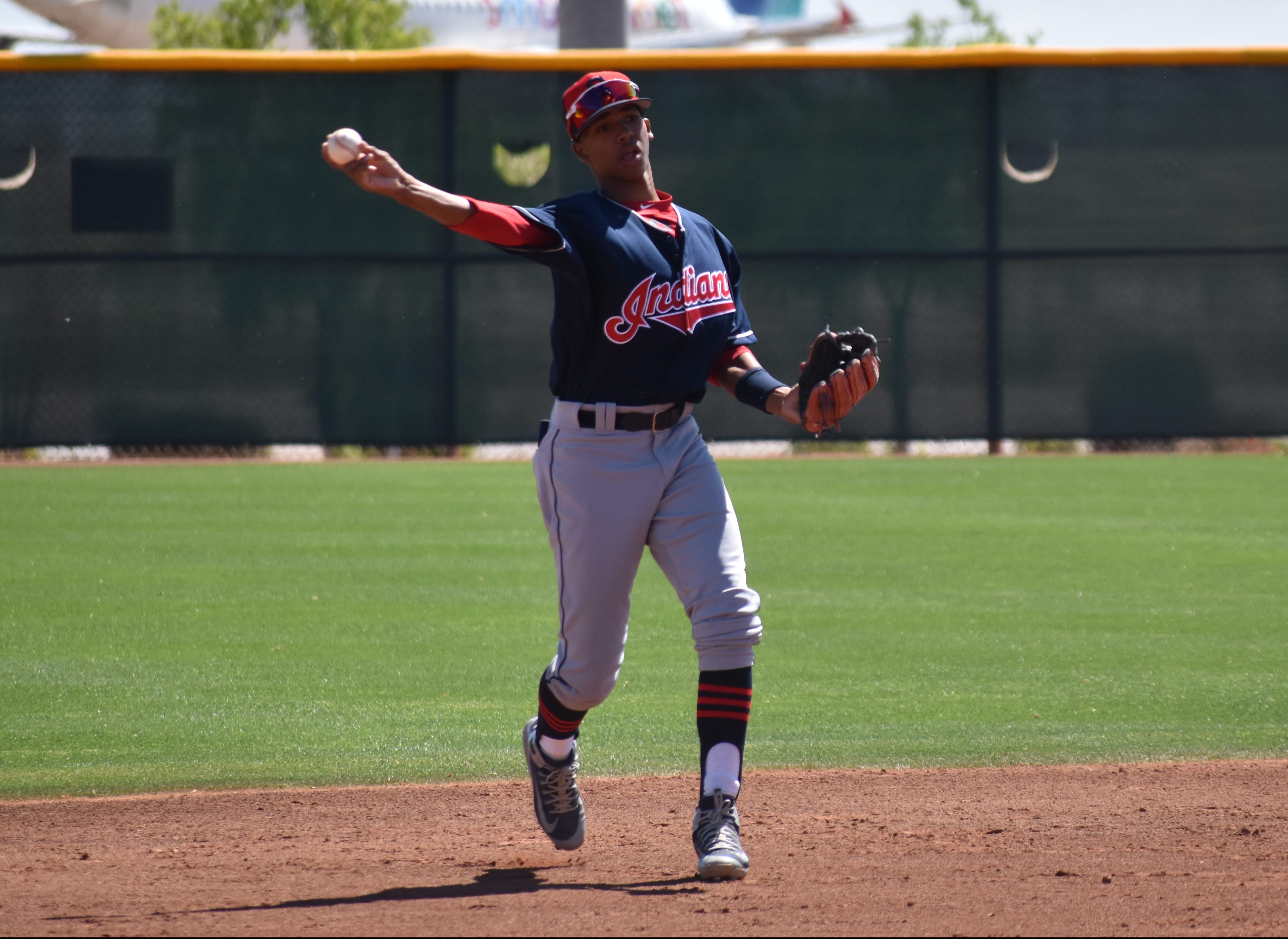 Good Times in Goodyear: One Week Down for the Red, White, Blue and Gray

For extended spring training in 2019, the Indians have split into four squads called Red, White, Blue and Gray, teams that will ultimately split between the Dominican Summer League Indians, Arizona League Indians White and Blue and the Mahoning Valley Scrappers. Teams started games last Wednesday (April 10th) and have now completed their first full week. Unfortunately, the unofficial nature of these games keep stats from being available to the public, but below I’ll recap some of my own observations from the games I was able to attend for each team.

While all teams are a mixture of players from multiple levels, first glance makes it seem that team Red is the more advanced (probably destined for Mahoning Valley) group. This team includes many from the 2018 AZL squads including catchers Eric Rodriguez and Bryan Lavastida, short stop Makesiondon Kelkboom and first baseman Michael Cooper. Of course, there are still plenty of truly young players including brand new rookies Henyer Gomez and Junior Sanquintin.

One of the first players to stick out was a player between those two extremes, Marlin Made. Made was with the team last year as a 17 year old with the Dominican Summer League Indians/Brewers where he had a respectable season and a .263/.338/.361 batting line. His notoriety came from his 12 doubles and his first hit in extended spring was an RBI double, one of two hits in his first game.

Cristopher Cespedes was the only other Indians hitter with two knocks in the first game, although his biggest was much bigger as he smashed an opposite field home run down the line in right. He followed this up with another home run, this time to left, on Tuesday April 16th. Like Made, he began his career as a 17 year old in the DSL, but will be 21 next month after four seasons between the DSL and AZL. While he has great power, his poor defensive play in the outfield and inconsistencies at the plate have held him back.

On the mound, James Hoyt looked good in a rehab assignment, striking out two and allowing just one hit in one inning in his first appearance, then striking out two more in 1.2 perfect innings the following Tuesday. Nick Sandlin also threw two innings on rehab and allowed just one hit with four strike outs. After his last appearance, he was activated on the Rubberducks roster.

While the older players tend to grab the headlines, it was Wilton Sanchez who really stuck out with a brand new hair cut, a solid fastball and two strike outs in a perfect inning of relief.

Rodriguez homers on the first pitch of his professional career. – Joseph Coblitz, BurningRiverBaseball

The youngest group of the extended spring Indians featured some impressive prospects who have yet to get into any official games. Gabriel Rodriguez began his first home game with a home run to left and added a second hit in that game as well while playing fine defense at short. Jesus Lara also made his unofficial debut with a single on Friday against Los Angeles. Also featured in that game were 2018 DSL returning players Jose Tena, Jhonkensy Noel and Wilfri Peralta among others. Noel had a break out game on Wednesday, April 17th with two triples.

Debuts weren’t limited to international signings as Cody Morris, the Indians 7th round pick in 2018, began his 2019 season on a healthy note. He pitched partial innings in the first and second and struck out three while allowing just one hit and one unearned run. He pitched again for multiple innings on the following Wednesday.

In relief, Dalin Noboa and Jerson Ramirez looked particularly impressive, each throwing scoreless, hitless innings on Friday. Ramirez pitched well in his first season in 2018 between the DSL and AZL and it appears his velocity may be up a tick. Darlin doesn’t throw as hard, but was also effective in the DSL in 2018 and should be ready for the AZL this time around.

Rodriguez pitches for the first time in his career during 2019 extended spring training. – Joseph Coblitz, BurningRiverBaseball

Another very young team, the gray group largely consists of players from the 2018 DSL Indians. This includes stand out center fielder Alexfri Planez as well as infielders Gaspar Palacio and Joseph Paulino. A newcomer, this team also includes Jose Baez, younger brother of Indians third baseman Jose Ramirez. While many in this group are known for their defensive prowess, Palacio and outfielder Cesar Idrogo looked good at the plate.

Providing some early season excitement on the mound was Jhan Rodriguez, former utility infielder for the Arizona League Indians (2017) and Scrappers (2018). Still sporting his infielders #4, Rodriguez brought a low 90’s fastball and solid curve to his debut on the mound. While he allowed an unearned run on a walk and a hit, the outing was ultimately a great success with two strike outs for the 20 year old and, hopefully, some extra confidence for his next time out.

This island of misfit Indians is quite the hodgepodge. It includes many on rehab assignments from throughout the entire system including 12 year MLB vet Tyler Clippard, long time AAA first baseman Nellie Rodriguez and AA catcher Sicnarf Loopstok. In addition, many of the gaps are filled with players who had great success in the AZL last year like Billy Wilson, Connor Smith and Daniel Schneemann.

Among the rehabbers, the best offensive performance on Monday was by center fielder Gabriel Mejia, down from Lynchburg. He walked, singled, stole a base, scored a run and knocked in another in addition to some stellar defense in the outfield. On the mound Brendan Meyer (signed as an amateur free agent by the Indians in 2018), Tim Herrin (2018 draft pick) and Jerson Ramirez all had great outings. Yes, this was the same Ramirez mentioned in Blue and this should further the point that these teams are fluid and these games aren’t official. For team White, Ramirez struck out four in two innings and, excepting some control issues, looked terrific again.