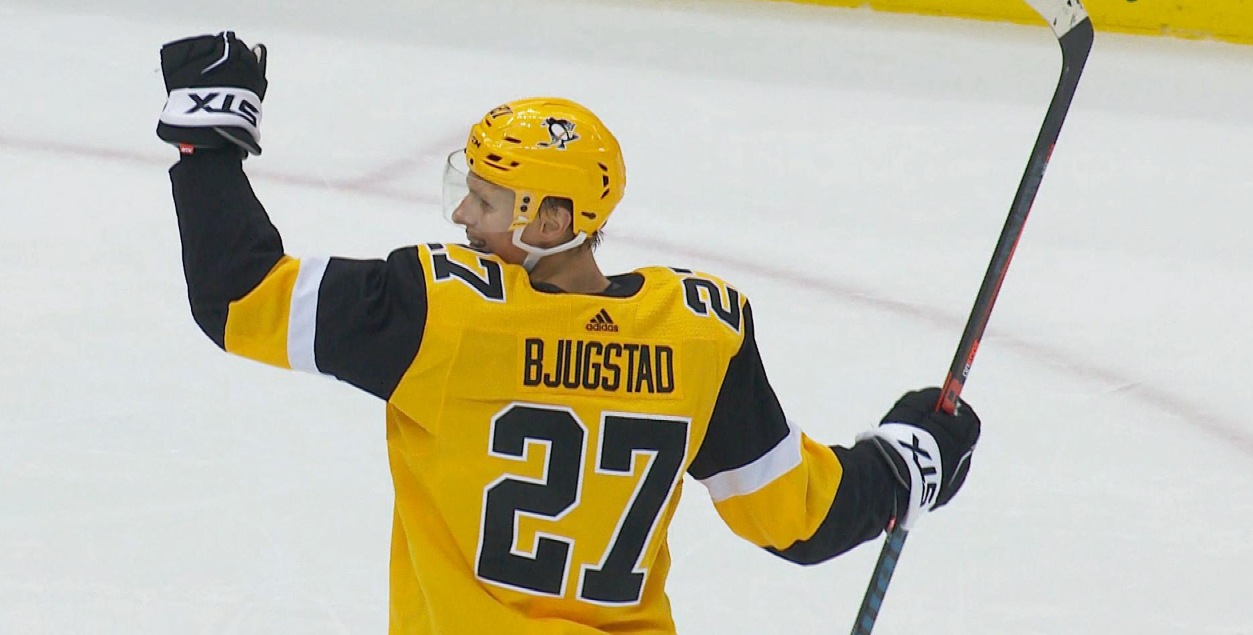 There is a legitimate case to be made that the Penguins haven’t had a true third line center since close of business on June 22, 2012.

Sure, that was the day that they got Brandon Sutter to be Jordan Staal’s heir-apparent, but things…did not work out.

Enter Nick Bonino, whose two years in Pittsburgh netted two Stanley Cups, captured lightning in a bottle with the HBK line, and earned Bones a nice payday of a cool $16.4M from Nashville.

The Penguins searched long and hard for his replacement, trying out guys with made-up names, guys who scored exactly two goals in 88 games prior to being acquired, and the since-been-cancelled Derick Brassard.

Because in the 32 games Nick Bjugstad played this year for the Penguins, it would appear that they found their heir to the Iron ThirdLC.

First, let’s take a look at his overall 5-on-5 shares of a few different data buckets and where those rank among all 18 Penguins forwards that played 150+ minutes at 5v5 this season, via Natural Stat Trick.

Aside from actual goals scored, Bjugstad finds himself in the top 4 across all data points in terms of his shares of those.  That means that when Bjugstad is on the ice, the Penguins control the events that take place.  Across the board, the only two players that consistently ranked higher than him were Sidney Crosby and Dominik Simon.

What’s noteworthy here, though, is that Bjugstad started just 48.61% of his shifts in the offensive zone, which drops to 41.98% when facing “elite” competition (more on that in a bit).  Meaning Bjugstad isn’t totally being put in a position to start and stay in the offensive zone.  He’s having to earn it.

We can see exactly where he falls among the Penguins forwards with the help of Sean Tierney‘s skater charts resources.

First up: The shot attempt rates per 60 minutes of 5v5 ice time, adjusted for both score and venue.

Obviously, generating more of anything that you allow is a good thing and shot attempts are no different.  For Bjugstad, he finds himself in the Good quadrant with the likes of Crosby, Guentzel and Simon.

Next, let’s see where he finds himself with respect to the rate of expected goals while he is on the ice.

Here, we can see that Bjugstad was on the ice for a similar amount of expected goals against as Sidney Crosby, who many were talking about getting Selke consideration this year for his defensive work, making Bjugstad one of the better defensive forwards on the team from a quality of shot/chance perspective.

Ideally, this is what you want to see out of your third-line center from a suppression standpoint: not giving up a lot, but still generating in the offensive zone.  And that’s what he does:

The stack of expected goal differential leaders above perhaps is the finest representation we have about how much of an improvement Bjugstad is over the likes of Brassard and Sheahan.  Similar ice times, but two got caved in, while one lived in the offensive zone.

Finally, let’s check in on the expectation versus reality because, at the end of the day, we still want to convert on and not allow goals that are being created.  Outscoring your opposition is part of the end game here, after all.  As it turns out, Bjugstad is (expectedly) good here, too.

But one of the biggest qualities we want in a 3rd line center is the ability to suppress the other team, right?  We can see what he does there when breaking down the above share-metrics to look at the events that take place against Bjugstad when he’s on the ice.

First, his numbers against per hour of 5v5 ice time among the same pool of 18 Penguins forwards with 150+ minutes played via Natural Stat Trick:

Again, you see here just what type of performance Nick Bjugstad had in terms of the events against him.  While that insane 1.36 goals against per hour at 5v5 can be mostly attributed to Matt Murray’s play from from February until the end of the regular season (just as it painted the illusion that Jack Johnson was “good” down the stretch), it turns out that with Bjugstad on the ice, Murray and the Penguins didn’t face a lot in their own end, especially in terms of the quality against (see: HD Scoring Chances and Expected Goals).

To illustrate this further, we need to look no further than Micah McCurdy‘s HockeyViz.com to see exactly what Bjugstad does relative to the league in those areas of the ice in terms of unblocked shots against.

And, relative to the Penguins team, you’d expect this trend to exist as well.

With the relative statistics, a negative number is good with the suppression-based numbers.  What it means is that, for example, when Bjugstad is on the ice, the Penguins are giving up 1.64 fewer high danger scoring chances against than when he is off of it.

In other words, when Bjugstad is on the ice, the Penguins are a better defensive team, particularly in high scoring areas, than when he’s off of it.

Again, via Micah McCurdy‘s HockeyViz.com, we can see just where the shots are coming from with Bjugstad on the ice at even strength relative to the rest of the Penguins roster.

The fact is that when Bjugstad is out there, his opponents are not getting shots from high danger areas (dark blue).  Where they are getting shots from is represented by the red (league-wide) and green (team-wide): the perimeter of the offensive zone.  That is inherently good.

Across all types of competition, he held his own with a greater than 50% share of shot attempts and dangerous unblocked shot attempts, but his performance against Elite competition, where he started juts 41.89% of his shifts in the offensive zone, is something to behold (via PuckIQ):

As it turns out, when Nick Bjugstad is on the ice against Elite competition, that competition does get much going against him straight up, relative to the team, and ends up spending a decent chunk of time defending him.

In fact, relative to the Penguins against Elite competition, the Penguins generated 14.83 more dangerous, unblocked shot attempts with him on the ice than with him off of it.  For a team that deploys Sidney Crosby, Evgeni Malkin, and Phil Kessel, that’s seems unheard of.

We saw that with the data and vizzes above, but seeing his results against Elite competition is both staggering and something to keep an eye on as the Penguins move forward.  Because if he is able to hold Elite players to 8.68 fewer shot attempts per hour of 5v5 play and 7.63 fewer dangerous, unblocked attempts per hour over the next two seasons as he did in the first 32 games as a Penguin while getting tough shift starts and forcing those Elite players to defend more than they attack, the Pens are going to be in pretty good shape down the middle of the ice moving forward.

Simply put: Nick Bjugstad is exactly what the Penguins have been missing from their third line centers since Jordan Staal’s departure.  He just shuts things down defensively and spends a considerable amount of time in the offensive zone, neutralizing his opponents in the process.

And if his trend holds true from the first 32 games of his Penguins career, the big man and his $4.1M contract will take no time to look like an absolute steal.