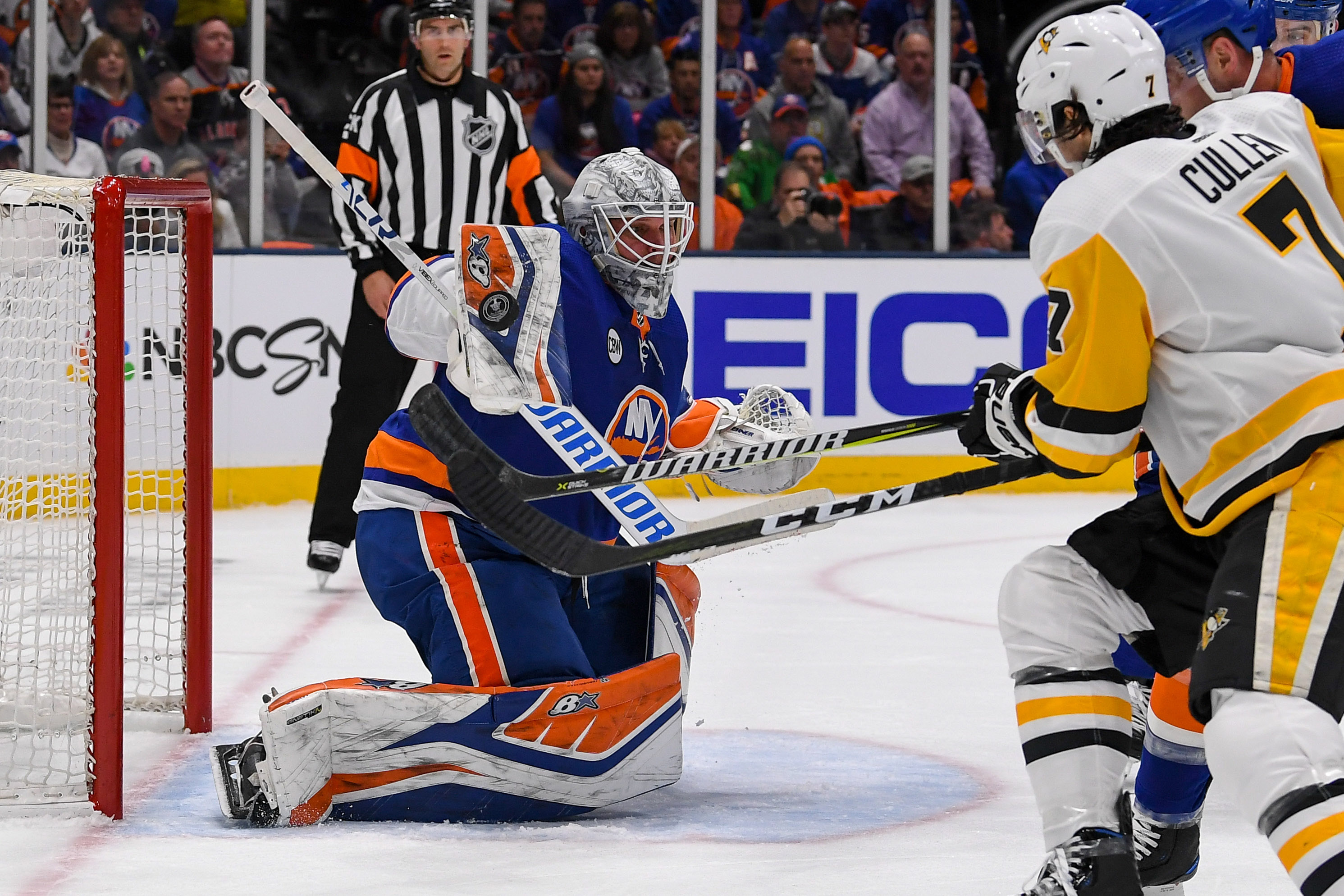 EAST MEADOW, N.Y. – Disney may come calling to make a Hollywood movie about Robin Lehner when the season is all said in done.

Lehner’s remarkable season became even more so on Saturday after the NHL announced that the Islanders netminder had been named a finalist for the Vezina Trophy. Ben Bishop of the Dallas Stars and Andrei Vasilevskiy of the Tampa Bay Lightning were also named finalists for the award, which is given to the NHL’s best goaltender.

“I’m honored obviously,” Lehner said. “I believe it going into the season, but a year ago I didn’t. There’s so many people that deserve credit and it starts with all my teammates, and the organization. A lot of credit goes to Mitch (Korn) and Piero (Greco) too. Helping me adjust some things to my game. It’s been a lot of hard work and it’s truly an honor.”

Lehner finished the regular season with the third best goals against average in the NHL (2.13) and the league’s second-best save percentage (.930). And along with Thomas Greiss, took the Islanders from allowing the most goals in the NHL last year to the fewest this season.

Those numbers continued into the first round of the playoffs, where Lehner surrendered a total of six goals in four games in the Islanders first-round sweep of the Pittsburgh Penguins. After allowing three in Game 1, Lehner held the Pens to one goal in each of the following three games.

“Good on him and he’s had a great year,” Islanders coach Barry Trotz said of Lehner. “Quite frankly you could nominate both our goalies. Their numbers were very similar. We don’t have the success without (Thomas Greiss), but it’s good on Robin. It proves you just want people to reach their potential.”

However, what makes the story more incredible has been what Lehner has overcome off the ice. The 27-year-old goaltender battled substance abuse and after checking himself into a rehab center in Arizona last year he was diagnosed with Bipolar disorder, along with ADHD with post-traumatic stress disorder.

The Islanders were one of the few teams that were willing to take a shot on Lehner last July and he openly told his story to The Athletic on the first day of training camp. Since then the team and the fans have rallied around the Swedish goaltender.

“It’s been a lot of hours on the ice since I was a little kid working hard, but just the fact that I gave myself a second chance together with my family,” Lehner said. “We’ve been working very hard to be in a good place and having fun. Having fun playing, and that’s the biggest thing. You have fun doing what you love and things snowball and you keep working hard…things go your way.”

Saturday was the second consecutive day that Lehner had been named as a finalist for a major league-wide award. On Friday he was named as one three finalists for the Masterton Trophy, which is given to the “player who best exemplifies the qualities of perseverance, sportsmanship and dedication to hockey.”

Still, as a finalist for two awards Lehner was still focused on the team prize awarded at the end of the playoffs.

“It would be really nice if we win the Cup first,” Lehner said when asked about the prospects of winning an award in Las Vegas in June. “These recognitions are nice. It’s given me a chance to keep building on a platform that I’ve started with a lot of these issues that I want to work with and shed light on. Help change the perception of everything because I still think there’s a long, long way to go.”