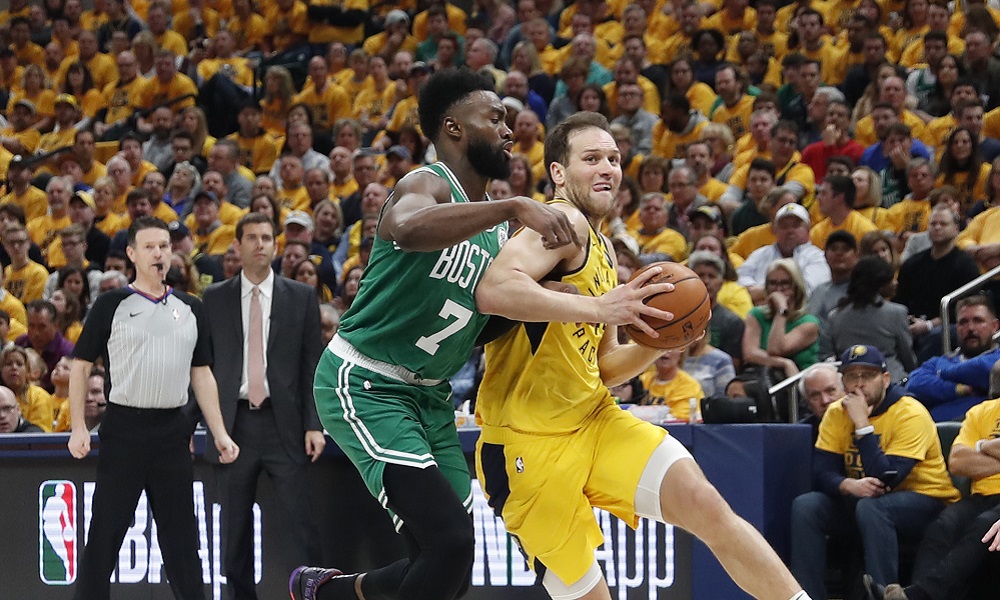 Then with just under four minutes left in Game 2, Brad Stevens sent Gordon Hayward in for Terry Rozier, joining forces once again with Kyrie Irving, Jaylen Brown, Jayson Tatum and Al Horford. With one Marcus (Smart) injured and the other (Morris) ice cold, Stevens was ready to give his original super lineup its first chance in ages to close out a win. The Celtics ended up outscoring Indiana 13-6 after Hayward checked in, so Stevens made the same move again to close out Friday night’s 104-96 Game 3 win to set up a chance at a sweep Sunday.

“It just shows we’ve come a long way in terms of our maturity as a group,” Irving said. “Just our mindset of whoever’s on the floor, making sure that we’re giving each other confidence and we’re all in the right spots and we’re all doing the little things to assure the win. When you have that type of camaraderie going into huddles, everyone’s talking, everyone’s feeling great.”

The strength of that group lies in its totality. Irving is the point of attack, punishing the Pacers with his pick-and-roll prowess alongside Horford, who closed out Indiana in Game 3. When Indiana is able to shut down Irving, Tatum can get his own basket. Both Brown and Hayward are able to fill in the gaps — Hayward’s tip in late in the fourth quarter proved to be the dagger that pushed the Pacers to the brink of elimination.

“Some of the shots [Irving] hit — he had [a] driving layup [in the fourth quarter], which was a good move but that little floating shot he hit was just a joke,” said Celtics coach Brad Stevens. “He’s ridiculous.”

Irving, who arrived at the podium apologizing for some sniffles, wasn’t his typical efficient self on this night. He missed 12 of the 19 shots he put up, but his two makes in the final six minutes were big-time baskets. Irving added two of his game-high 10 assists in the final stretch, twice feeding Al Horford after sucking in the defense with his drives.

“Very comforting,” Horford said when asked about how much easier a player like Irving makes things in crunch time. “Just gives us a lot of confidence. We know that if we need a basket or we need a play, we can go to him.”

Talent always wins out in the NBA. With very few exceptions over the league’s seven decades, the team with the most all-stars has raised the trophy after each season’s final buzzer. It’s not hard to understand.

It made complete sense when the season began for Brad to roll out a lineup of three past all-stars and two probable future stars. We found out the hard way (the 10-10 record after 20 games) that those five just weren’t ready then to make it all work. But they appear to be ready now, and that’s some damn fine timing.

The other crucial element to winning in the NBA is having a closer, a finisher, a go-to guy – the superstar who makes the difference for everyone else. The Celtics, of course, have Kyrie, and they caught a break by being seeded with the Pacers, who are missing their difference-maker, Victor Oladipo. (Although when Kyrie was out last year, I don’t recall the Celts getting much sympathy.) Kyrie definitely has proven his value, averaging 25.3/5.3/8 for the series while shooting 45.2/50/90.

The optimist will say the Celtics are about to sweep the Pacers, and in the process proving they’re the most talented team in the East – like almost everyone thought when this season began. The pessimist will say the 3-0 lead is an illusion, that short-handed Indy is not a true test.

Globe: It took a while, but revived Celtics are riding their defense

MassLive: When in doubt, the Kyrie Irving, Al Horford combination closes things out  |  Boston Celtics, Brad Stevens hope to close out Indiana Pacers in Game 4: ‘Let’s just hit singles’  |  Battle of the bigs going Boston’s way, and so is the series  |  Al Horford on having dad Tito Horford around: ‘It’s very special for our family’

The Athletic: Celtics prove tough enough to win a playoff game on the road, where last year’s team wilted

On Page 2: Jaylen’s turn to shine

Although Brown’s flashy stat line Friday likely caught more attention than those from the previous two games, Stevens noted there actually isn’t much of a difference among the three outings. He specifically highlighted Brown’s consistent defense guarding Pacers forward Bojan Bogdanovic, which, in Stevens’s words, is “a heck of a task.”

Jaylen is getting lots of love for all that, which is not always true for the third-year forward. His Celtics career started with season ticket holders booing him on draft night. He’s been generally overshadowed by his slightly younger counterpart, Jayson Tatum (only one of them ever dunked on LeBron in the fourth quarter of a Game 7). And anytime there’s discussion of trading for Anthony Davis, it’s a given that Jaylen will be heading south.

But there was no ignoring him last night. He drilled three straight triples in the opening minutes, which helped build a 41-28 lead after one quarter and put the Pacers on their heels for the entire game. Although Indiana did bounce back to make it tense for the last three quarters, at no point were they in control of a must-win game.

Jaylen’s defensive performance in this series has definitely helped Boston withstand Smart’s absence. For the Celtics to win their next series, Jaylen will need to do even more.

And, finally… Stat of the night

Maybe, when they get fouled, they should move back.