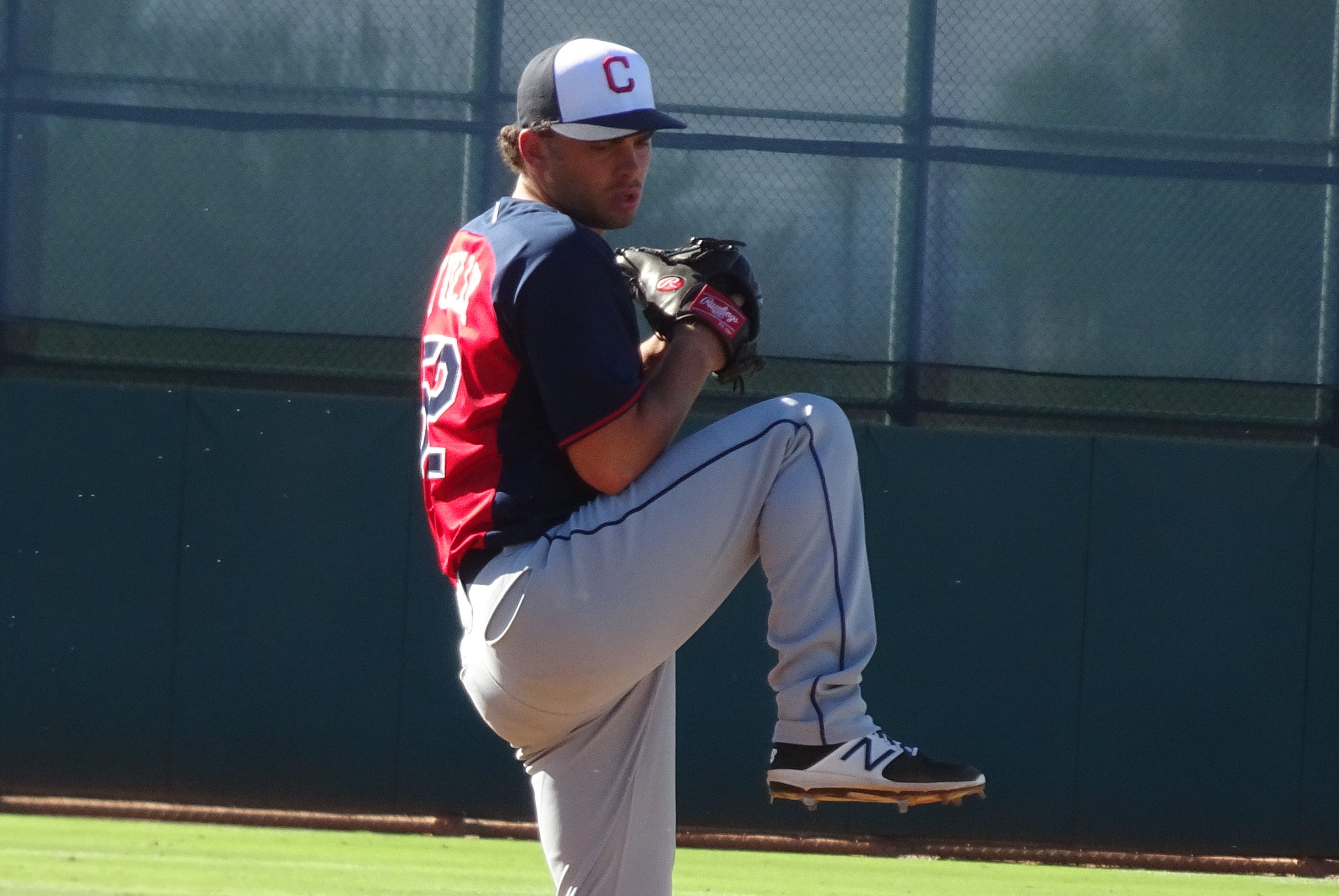 Every season BurningRiverBaseball brings you not only the top 100 prospects in the Cleveland Indians farm system (in November), but also a position by position break down throughout the regular season. This year, we’ll start that break down with the top ten left handed starting pitchers currently controlled by the Indians in the minor leagues. While it doesn’t particularly effect this list, all of BurningRiverBaseball’s prospect lists only look at players with no Major League playing time and players are generally considered for their most applicable position (hence why Rob Kaminsky is not on this list).

Removed from the 2018 edition of the left handed starting pitcher rankings were Anderson Polanco (#10) and Jahir Varela (#9), who are now relief pitchers.

We went a little overboard on Tully last year, ranking him third among left handed starters largely because of his incredible success in climbing through the system in 2017. He had a rough go of it in 2018 in Lynchburg, especially considering his strike out rate that dropped from 8.9 per nine in Lake County to 6.7.

Starting in Akron this year, Tully has seen a great improvement in strike out rate over his first few starts while maintaining a minuscule BB/9 (1.4 for his career). Given how close the talent distribution is between #4 and #10 on this list, it’s very possible that Tully could yo-yo his way back to the top by next year’s edition.

Aiken was the Indians number 1 draft pick back in 2015 despite coming off of ACL surgery at the time. The year prior he had been the number 1 pick in the entire draft. He was selected by the Houston Astros, but they could not agree on contract terms so Aiken went to prep school and re-entered the draft the following year.

So far, Aiken has not been able to regain the superior stuff he had prior to the surgery. Last season he spent the entire season in Arizona at the Indians training facility, working on his body and his delivery. The results of that work have not been very encouraging so far this season. Of the 9 batters he has faced thus far this season he has walked six, giving up 1 hit and thrown 2 wild pitches. Disastrous to say the least. Right now Aiken is on this list because of what he once was. He is still only 22 years old and obviously has some incredible potential. However, Aiken needs some sign of improvement soon, if for no other reason than his own psyche. The poor results have to be weighing on him at this point.

This season is Hillman’s 5th season of professional baseball. At one time he was a highly thought of pitching prospect, but he has struggled quite a bit however, and right now is no longer ranked in Cleveland’s top 30 prospect list.

In his minor league career, Hillman has a 17-30 record. His ERA is 5.15 and his WHIP is 1.47. In 370.1 innings he has only 270 strikeouts. The high WHIP and ERA and low strikeout numbers are not particularly encouraging. However at times Hillman has shown flashes of excellence. He is not overpowering so he is going to need elite control and above average pitch sequencing if he is going to advance and improve his performance.

Since joining the Indians organization out of the College of Idaho, Draper has made 37 appearances over two plus seasons with 17 starts. At this point it’s hard to say his future will be as a starter. He will more than likely end up in the bullpen full-time eventually, but because he started 15 games last season we are currently evaluating him as a starter.

Last season he pitched 81 1/3 innings between Mahoning Valley and Lake County. He had a 7-5 record with 74 strikeouts and 17 walks last season with a 3.10 ERA. This season he is starting the year at Lake County. He has made 3 appearances so far including 1 start. As a 30th round draft pick Draper faces an uphill battle to get to the majors. The next season or 2 should give us a really good idea where his future will lie.

Last season McCarty made 27 starts between Lake County and Lynchburg. He pitched 146.1 innings. He had a combined ERA of 4.06 with 161 strikeouts. He was promoted to Lynchburg late in the season. Although it was a small sample size, he lowered his ERA to 3.09 and had a WHIP of 0.97.

So far this season McCarty has not pitched in an official game. He is still in extended spring training in Arizona. Once he is ready expect McCarty to start his season in Lynchburg. McCarty has not been that highly regarded during most of his time in the Indians organization. However the way he finished last season was impressive. If he can build on that and continue to improve he will have a bright future.

Perez has a good fastball offset by a great curve, but the pair didn’t lead to great success in 2018. With Lake County, he held a 4.07 ERA with an unimpressive 7.2 K/9 as he pitched through 100 innings for the first time in his career. He has some lengthening out to do if he will remain a starter, and beginning the season injured in Arizona is certainly not going to help that.

Beyond his injury (which doesn’t appear significant), Perez has had control issues as well as a drop in velocity. This has predicated his drop in the rankings although he still has great potential if he can regain his former form.

The second oldest player on this list, Brady is tied for longest tenured with Whitehouse, each sitting in their seventh and potentially final minor league season with the Indians. If the Indians chose not to add them to the 40 man roster by the end of the season, they will be given the opportunity to exit through minor league free agency or to resign with the team.

The good news for Brady is that he is the closest to MLB ready on this list and one of the next due up should injuries haunt the Indians rotation further. The bad news for Brady is that, while he has been successful in Lynchburg, Akron, his time in the Arizona Fall League with Glendale and his short time in Columbus, there are huge question marks about whether his style of pitching would be as effective in the big leagues. This dichotomy makes Brady both the most likely to debut in the Majors first among these ten pitchers and one of the most likely to not be with the Indians in any fashion in 2020.

One of the older players on this list, Yannuzzi came to the team in 2015, but is still yet to play a full season in A ball or above. He will likely start the official season in Mahoning Valley in 2019 where he is set to be significantly older than the field. Yannuzzi doesn’t have incredible velocity, but he has a full repertoire of pitches and is good at forcing weak contact. He has some work to do on his control as his stuff isn’t overpowering enough to forgive a high walk rate.

So far in his career, he has been extremely successful, he just doesn’t stand out as a future star. A mid-season promotion to Lake County and some early success there could potentially change that prognostication.

Hentges pitches against the Reds during the 2015 Instructional League. – Joseph Coblitz, BurningRiverBaseball

There is no question that Hentges has put in his time with the Indians and paid his dues after six seasons and multiple injury set backs. Now, Hentges can claim nearly 300 innings over more than 60 starts and a K/9 of 10.0. Despite being in his sixth season with the team, this is the 6’8″ 245 pound lefties first season in Akron. While this is mostly due to the aforementioned injuries, it may have at least a little to do with a walk rate that has come a little too close to 5.0 per nine.

Hentges has the velocity and strike out numbers that the Indians love and almost never allows the long ball, but unless he can get his walk rate in line, he may never get a real chance. At any rate, Hentges remains behind quite a few other starters in the Indians depth chart (all right handed) and is at least two years away from the big leagues.

Burgos warms up prior to practice during 2019 MiLB spring training. – Joseph Coblitz, BurningRiverBaseball

Burgos went from being completely unranked in the 2018 left handed starter rankings to the #1 spot largely because prior to the 2018 season, he had never pitched in an official game. Despite being drafted in 2016, Burgos missed all of 2016 and 2017 with injury, but came on with a vengeance last year. I was able to observe him for the first time in extended spring training where he blew onto the scene with a dominant fastball, slider and good control.

He then went on to lead the AZL Indians 1 team to the play-offs with a 10.0 K/9 and 3.78 ERA in 52.1 innings. After a paltry single appearance in Mahoning Valley (a 5.2 inning shut out with 9 K’s), the Indians determined that Burgos was ready for A ball where he has dominated early with the Captains despite being about 3.5 years younger than the average player at that level. He has made his time missed seem like time well spent with a quick rise through the system and there is no Indians starter worth being more excited about this side of Triston McKenzie.