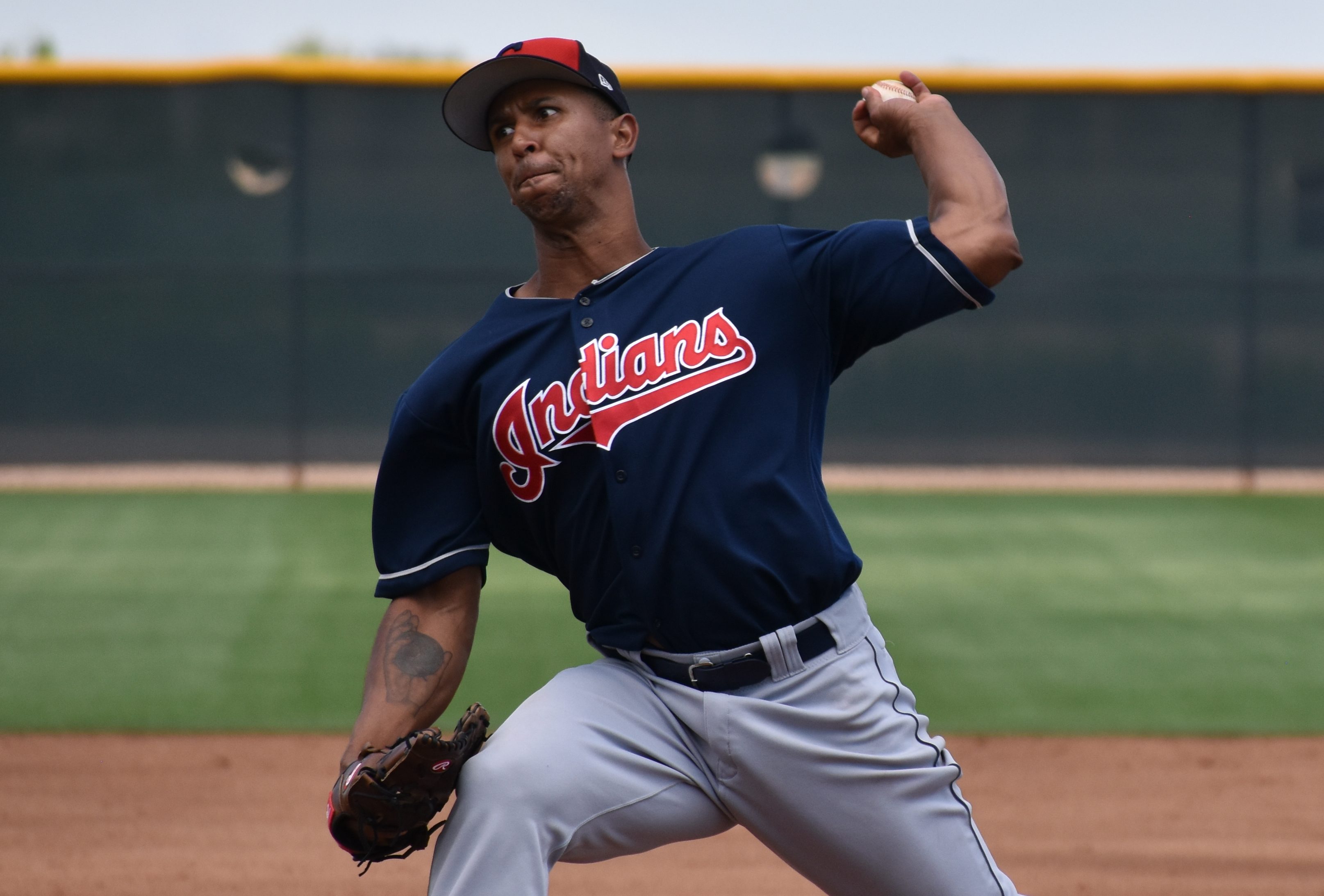 Soteldo pitches during his first season with the Indians in 2019 extended spring training. – Joseph Coblitz, BurningRiverBaseball

The Indians began their second week of play in extended spring training with the Gray team facing off against the Dodgers on Friday. This mostly young team featured a few of the more veteran players in camp including Raynel Delgado, Felix Fernandez and Jordan Scheftz.

Starting off against LA was Victor Soteldo, who has yet to pitch in an official game for the Indians. He looked sharp, although a couple of errors kept him from pitching a full inning. Overall, he went 0.2 with a strike out, no hits and no walks allowed. Juan Zapata was also excellent in relief, striking out two in a perfect inning. Zapata previously pitched a scoreless inning with one walk for Indians Blue.

Offensively, there was a little show of power as Yainer Diaz hit a double, Jeikol Contreras hit a triple and Fernandez went deep. Gaspar Palacio contributed with a small ball double when he was hit by a pitch and stole second.

Playing again on Wednesday, the youngsters came through again with some real power against the Brewers. 2018 draft pick Raynel Delgado lead off the line-up and provided some punch with two RBI, a steal and a run scored, but the real heroes were the youngest men on the field, Alexfri Planez and Gaspar Palacio, who each hit a home run. Planez hit the longer shot, a three run home run in the third that went out just to the left of the batter’s eye in center field. Palacio’s was a solo shot in the following inning that went off the protective netting above the wall in right. Jothson Flores added to the offense with two hits including a triple that was lined in the gap in right center.

On the mound, both Kyle Marman and James Hoyt were excellent in relief. Marman pitched the third and allowed just one base runner on a walk. Marman was a 13th round pick last year and is yet to get into an official game, but has pitched two innings that I have seen this season, striking out three with no earned runs allowed.

Hoyt continues on his rehab assignment as he prepares for a return to Columbus. He blew through his inning of relief so quickly today that the coaching staff extended the inning by two more outs. He did allow a single after the first three outs were recorded, but the runner was caught stealing. On Wednesday, he struck out three of the five batters faced and in the three appearances that I’ve witnessed, he has not walked a batter and struck out five total with just one hit allowed.

Maestre leaps to grab a high throw from the catcher during a 2019 extended spring training game. – Joseph Coblitz, BurningRiverBaseball

Indians Red tied the highest run scoring output of any extended game I’ve seen this year on Monday, matching their seven runs from the previous Tuesday. Seven different hitters reached base with a hit with the biggest blast being a Makesiondon Kelkboom home run to left. Jesus Maestre showed off his speed and patience as he reached with a walk and a triple, scoring two runs.

Cody Morris came up huge for the Indians with three innings, two hits and no earned runs allowed (one unearned run). Morris had pitched previously for team Blue, but was much more in control in this outing. I’ve now seen him pitch seven innings across three appearances with seven hits, four earned runs, nine strike outs and two walks allowed. Morris was a 7th round pick out of University of South Carolina last summer and has yet to pitch in an official game.

Brennan Bernardino was signed as a minor league free agent earlier this year, but pitched just 4.1 innings with Akron before being knocked out of action. He struck out two in a perfect inning in relief on Monday as he worked his way back to the upper minors.

Jhonkensy Noel was one of the biggest performers in week one, earning himself a more in depth look (which can be seen here) and he continues to rake. On Tuesday, he crushed a double down the right field line, then hit a line drive single to left. Overall, in the three games I have observed him play, he has went 4 for 10 with three extra base hits.

While the rest of the offense didn’t prove powerful on that day, there was an interesting note out of the bullpen. Signed as a free agent during the off-season, Anthony Gose worked out of the bullpen for 1.1 innings. Gose struck out two and walked two. Combining the good and bad, he struck out a batter with two outs in the fifth only to have the ball get by the catcher, allowing the runner to reach. On the next pitch, Drew Mount took Gose deep to left for three unearned runs.