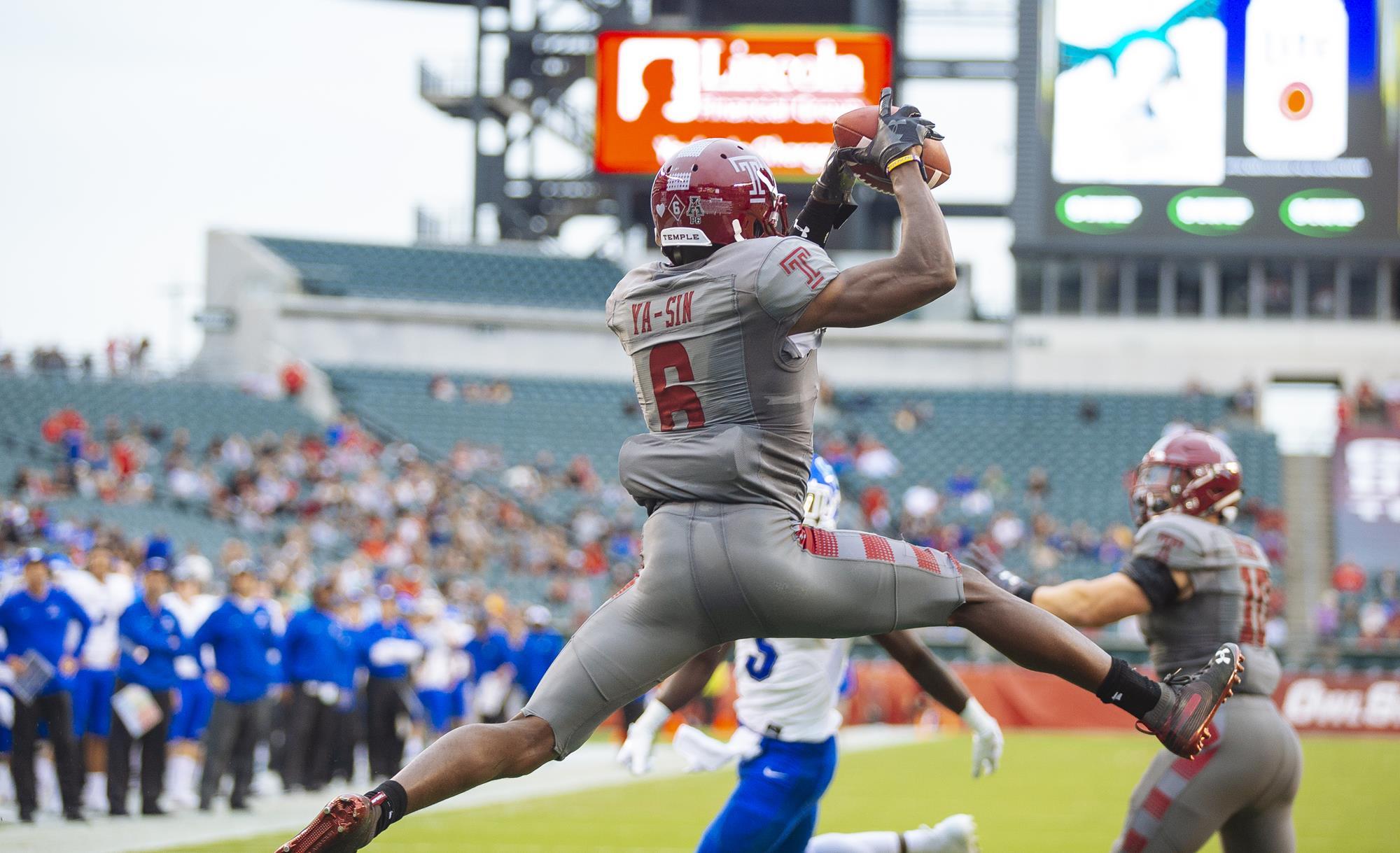 What’s up, Colts fans? Here we are. It’s draft day, and time for another draft diary. Here’s what you can expect:

I will cover the first round through the Colts’ pick, give my thoughts on it, then finish up tomorrow once I’ve had a chance to sleep on it. I will get irritated because the screen will show “the pick is in” yet the talking heads will not shut up. I will get bored midway through the round. I will try to be entertaining.

This year’s presents a bit of an issue, as the event is so overblown it lasts forever, and in the five years I’ve been doing this, the Colts have never picked this late. My patience will be tested.

Let’s go. All times are CST

5:20-  What in the hell are DeAngelo Williams and Vince Woolfork wearing?  I get what Vince is doing here with this outfit. He’s going with the extra long red napkin in front, the better to hide the stains of that Nashville BBQ. I can respect a man who prepares, although it’s awfully hard to hide BBQ sauce stains on a white suit. Whatever.

5:25-  They’re showing group pics of players and almost all of these guys are wearing high water pants with no socks and tennis shoes. They’re making a fashion statement, folks.

We all know the baseball player is going to be the first pick, right? We’ll find out in about 10 minutes.

7:09-  Goodell comes out to brief cheers that are quickly overran by boos. Normalcy.

7:17-  The Cardinals have literally used more than 5 minutes of their allotted time, which is ridiculous because everyone knows they’re taking the baseball player. Just get this over, already.

7:24-  I’m sure the Cardinals are thrilled with the baseball player.

7:32-  Niners take Nick Bosa. He should be a beast. He also deleted his Twitter account in advance of the draft, saying “I may be going to San Francisco.”

7:40-  Jets take DL Quinnen Williams from Bama. I like this pick. In his interview, he thanked Arizona and San Francisco for “passing on the best player in the draft.”

7:48-  ESPN just spent 10 minutes talking about Josh Allen and Ed Oliver, only for the Raiders to select Clelin Ferrell, a DL from Clemson. There was brief silence from the booth. It was hilarious.

7:57-  Tampa takes LSU LB Devin White. Good inside LB. I like this pick, except it’s Tampa, so we’ll probably never hear from him again.

8:01-  Giants draft Eli Manning’s replacement, Duke QB Daniel Jones. I mean, I have no idea if this pick will work out for them, but I do know Kiper lobbied hard for this pick. Take that as you will.

8:08-  The Hags take Kentucky DE Josh Allen. I like Allen as a player, but more importantly, it’s nice to see the Hags back to drafting inside the top 10 per usual.

8:14-  With the 8th pick, the Lions take Iowa TE TJ Hockenson. Former basketball player turned TE alert! Hockenson is the 2nd Iowa TE to win the Mackey Award, after some guy who once wore #44 for the Colts. You may remember that guy.

8:20-  Buffalo takes Ed Oliver, a DT from Houston. He enjoys riding horses, so this is a perfect fit. Quick hands, they say. Alas, I have no reports on his hand size.

This is The. Longest. Draft. Ever. Speed it up already.

8:28-  We have a trade. All Roger said was Pittsburgh got this pick from Denver, so I’m assuming they’re swapping first round picks. Anyway, I called it before he even said it: Devin Bush, LB from Michigan. I refuse to show a pic of his outfit, but he looks like a cookie.

We’re not even halfway to the Colts pick.

8:40-  Green Bay takes DE Rashan Gary from Michigan. Wingo points out he was the #1 recruit in the country, “but the stats never matched up.” I’m not sure what to think, but the reaction from the Green Bay fans was less than desirable. They didn’t boo because they’re from the Midwest.

8:51-  Falcons take some G from Boston College named Chris Lindstrom. All I know is he ain’t as good as Quenton Nelson.

We’re just now to pick 15. Someone kill me. Or kill ESPN.

It’s been talked about on social media, and now here we are….

8:59- Redskins tab QB Dwayne Haskins from Ohio State. Everyone thought he’d be gone by now. Even better, there were reports floating around of a divide in their front office, as some wanted to go defense, while some wanted Haskins. Haskins fell into their lap.

9:13-  The Giants take Clemson DL Dexter Lawrence. This is the first time since 2006 that a school has had three d-linemen selected in the first round. Lawrence checks in at around 360 pounds, so you do not want to wrestle him.

9:17-  Minnesota clearly had their minds made up, as they took little time in taking C Garrett Bradbury from NC State. Bradbury reminds me a bit of Ryan Kelly. When ESPN played his highlight tape, there were at least two blocks in the open that were clear holds and probably won’t fly in the NFL. Bradbury gets to the second level block quickly.

9:24-  Tennessee picks DL Jeffery Simmons. ESPN shows his highlight reel, which features him pulling his sister off another woman, then landing several blows against said woman as his mother joins in as well. The incident took place in 2016, and Simmons – as well as the other three women – were all charged in some form for it. Did he need to land blows on a defenseless person laying on the ground? No, and it was serious enough that Mort reports that they counted 11 teams who took Simmons off their board.

9:30-  Denver takes Iowa TE Noah Fant with the pick they dealt Pittsburgh earlier. It’s the first time in NFL history that two TE from the same school have been picked in the first round. On my end, I’m not sure what good it does you to pick a TE when your QB is shit, but you do you, Elway.

The Colts are five picks away. There are some interesting players still around, including a WR and a DB I’d like to see in the blue next season. We’ll see.

9:37-  Green Bay and Seattle make a trade. Seattle will now pick 28. Green Bay selects Darnell Savage, Jr., who is a DB I hoped would fall to the Colts. I’d like to take this time to remind everyone that Aaron Rodgers is a bad teammate and a coach killer.

BTW, Savage isn’t the DB I had in mind earlier.

9:41-  Another trade. The Eagles move up, Baltimore moves to 25, and something else that I don’t care about. All i’m thinking is the Eagles are going to take someone I’m hoping falls to the Colts.

Philly takes OT Andre Dillard from Washington State. This is the first time an OL from Wazzu has been taken in the first round. Not sure who Philly was trying to trump here, but it ain’t the Colts, so I’m good.

Houston is up next, and i totally expect them to take a certain WR. They have no choice.

9:50-  Texans select some OT I’ve never heard of. Psst: As long as Watson continues to hold onto the ball so long, who they draft for the line isn’t going to matter.

9:56-  Raiders take RB Josh Jacobs from Bama, as noted genius Mike Mayock continues to baffle Raider fans with his picks. I mean, perhaps it will work.

The Baltimore Professional Football Team is up next, and I clearly expect them to take one of the players I have in mind for the Colts.

10:04-  Marquise Brown goes to the Ravens. He’s Antonio Brown’s cousin, and I’d just like to take this time to point out that Antonio is an idiot. Hopefully his cousin doesn’t follow in his footsteps.

The Colts are up next, and the two guys I’ve had in mind are still on the board. This is pick 26, but keep in mind they have pick 34 as well, so it’s basically like getting two 1st rounders.

The Colts will receive the 46th pick in this year’s draft, and a 2nd rounder in 2020. With the 34th selection this year, I don’t feel like they’ve sacrificed much. That 2020 pick is looking pretty sweet right now.

Normally this space is reserved for my thoughts on the team’s 1st round pick after I’ve had a chance to sleep on it, but there was no pick, so here we are.

5:43-  I am relishing the opportunity to kill two birds with one stone, so here is Reggie Wayne destroying the entire Titans fan base and announcing the team’s first pick:

Rest In Peace to the Titans fans who just booed Reggie Wayne.

“I know y’all not booing. Come on Tennessee. Y’all done played the Colts twenty times in ten years and ya done won three games. Stop it.”

Rock Ya-Sin is a DB from Temple. I’ve seen him mentioned as a CB and a S, but he’s probably a CB in the NFL. 6 feet tall and around 195 lbs. Had a very good combine.

I trust Chris Ballard and I do like this pick, but I think it’s one where Ballard is certainly looking at the skill set here and envisioning a guy that three years down the road can be a major force. He’s got a long body, quick feet, strong, he’s willing to help in the run game, he’s aggressive, and he’s tough as nails. When your team assigns single digit numbers to the toughest guys on the roster and you earn one in your first season, that’s tell us all we need to know. Negatives I’ve read say his technique needs improvement and his field awareness is questionable, but the guy’s only had 1 year of major college football experience. Of course he’s going to have some deficiencies. I think the Colts found a keeper here.

I’ll leave you with this from an unnamed AFC coach:

“Once he adds some coaching and technique to his physical tools, he’s got a chance to take a big leap. We love guys that look like him. That’s what you want your GM to draft.”

That works for me.