Eagles stay put in Round 2, select RB and WR

Eagles stay put in Round 2, select RB and WR

It speaks to the overall depth of the 2019 draft class that Howie Roseman did not maneuver within or out of the 2nd round. He took what was given.

The Eagles selected Miles Sanders in the second round of the 2019 NFL Draft, 53rd overall. 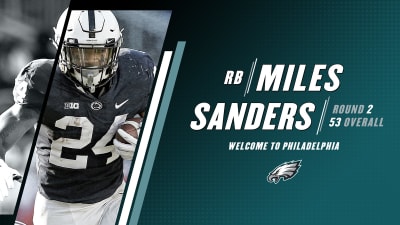 Sanders had to wait behind Saquon Barkley for his chance to start at Penn State, but he was a hit in his lone starting season in 2018, running for 1,274 yards (5.8 YPC) and nine touchdowns while adding 24 receptions for 139 yards. Sanders is untested as a pass catcher and has ball security concerns, but he’s an uncommonly springy athlete whose ability to anchor and change direction explosively gives him interesting upside in a mostly nondescript running back class. Sanders (5-foot-11, 211 pounds) demonstrated his plus athleticism with a 4.49-second 40, 124-inch broad jump, and 11.08 agility score. While he is a long shot to earn a featured role in Philadelphia as a rookie, Sanders is a candidate to evenly split snaps with Jordan Howard and Corey Clement in any given game.

The Eagles then selected J.J. Arcega-Whiteside in the second round of the 2019 NFL Draft, 57th overall.

Arcega-Whiteside (6-foot-2, 225 pounds) is a big wideout with a rich skill set and the ability to play both the slot and outside at a high level. While he lacks standout athleticism (4.49-second 40), Arcega-Whiteside’s route running and ball skills are off the charts, showing an innate ability to set himself in an advantageous position and winning the vast majority of jumpball situations. Arcega-Whiteside’s box-out ability in the end zone is about the closest that you get to a pro wrestling-style finishing move in football. At Stanford it arrived on a basis that felt almost scripted, and the box score tells a similar story (28 touchdowns on 135 career catches). It’s a deep and crowded pass catcher rotation in Philadelphia so JJAW is more of a long-term asset than an immediate one, but he’s not the kind of guy you want to bet against.

Regarding our MACH 10 Challenge, five contestants had Miles Sanders on their ballots—Beanstalk, Lupes, Kent Phil, Kenny Kenemeka and Stine. That makes a 6-way tie for the lead, counting Palm Feathers’ hit on Round 1with Andre Dillard, heading into the final rounds 4-7.

Most of us are quite familiar with Miles Sanders’ career year at Penn State in 2018, but few of us apparently know too much about Arcega-Whiteside.

Checking out CBSSports.com’s review of Arcega-Whiteside:

“Looks like Mike Evans but could be more Anquan Boldin based on how fast he runs (Arecega-Whiteside didn’t run the 40 at the combine). Regularly more physical than smaller receivers and his basketball background (both his parents played professionally) shows up on tape when he posts up defensive backs for jump balls in the end zone. He’s a high-point catcher on downfield throws and is rarely out of position to make play on ball. Questions will be about deep speed and separation downfield.

Pete Prisco: I think there were better options on the field. He didn’t play to that speed. When you watched him on tape you say he’s a big, physical guy but he doesn’t run that well… well, he did run that well. I worry when guys don’t play to their speed.

Chris Trapasso: Arcega-Whiteside measured in at 6-foot-2 and 225 pounds with 33 1/4-inch arms and 9 1/2-inch hands at the combine. So he’s not as monstrous as Evans, who was just under 6-5 and 231 pounds with 35 1/8-inch arms and 9 5/8-inch hands at his combine in 2014. But their playing styles couldn’t be more similar. Like Evans, Arcega-Whiteside is a deceptively fast linear wideout with flat-out stupid ball skills. I’ve called him the best rebounder in this class for months now, and he’s dominant in that area. Evans was the same type of overwhelming power forward when he entered the league out of Texas A&M. Arcega-Whiteside isn’t totally without lateral mobility either. In some instances, he can pick up yards after the catch.

Welp, if you like Stanford, you loved the pick! 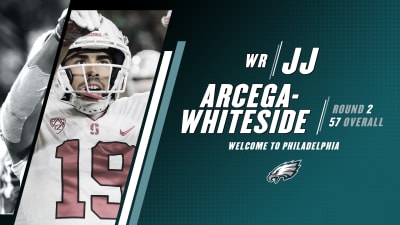