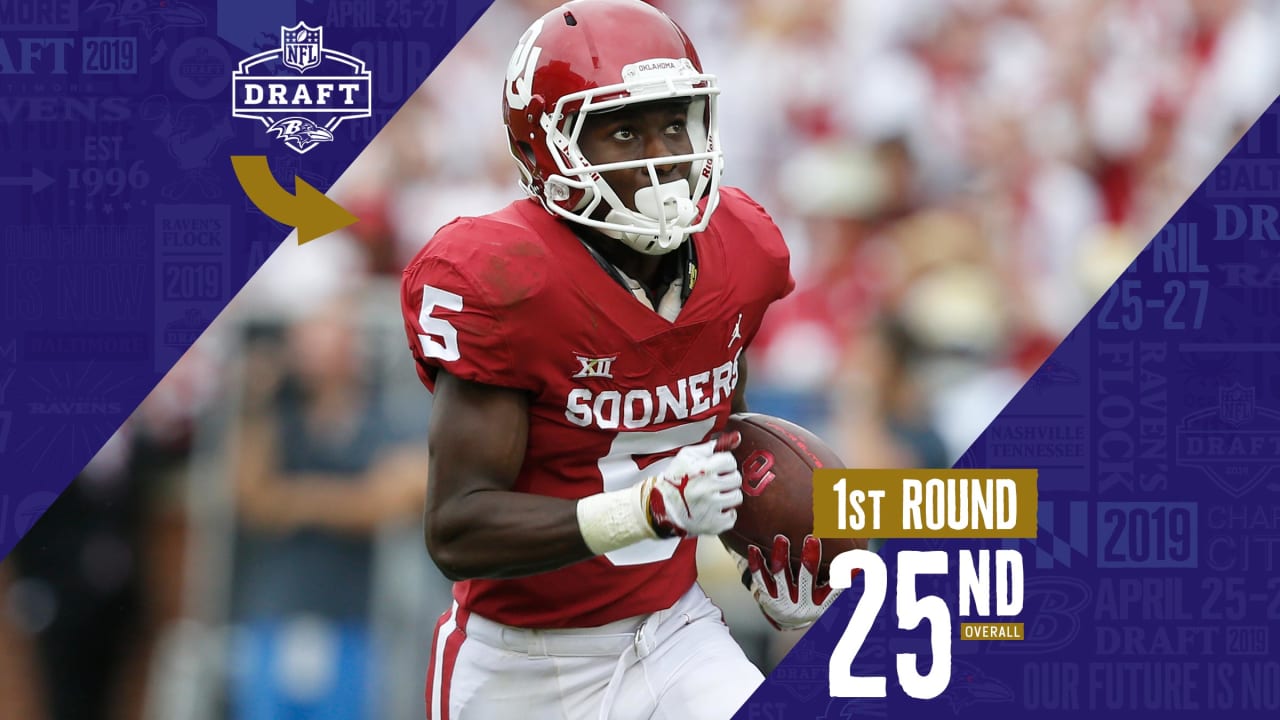 Taking wide receiver Marquise “Hollywood” Brown with their first pick in the NFL Draft, the Ravens addressed a major need with a big-time playmaker. After trading down from No. 22 to No. 25 in a move with the Philadelphia Eagles, the Ravens selected Brown, a 5-foot-9, 166-pound speedster from Oklahoma.

He was the first wide receiver drafted after being one of the most explosive players in college football last season. Last season, he had 75 catches for 1,318 yards and 10 touchdowns, averaging 17.1 yards per catch.Brown and quarterback Kyler Murray, who was the first-overall pick in the draft by the Arizona Cardinals, were a dynamic duo at Oklahoma. The Ravens hope Brown and quarterback Lamar Jackson can bring that same big-play dynamic to Baltimore’s offense.

“The biggest question surrounding Brown is his size. He will be one of the NFL’s smallest players. But the Ravens weren’t afraid to let Jackson, who some pundits called too thin, run despite fears that he could get injured, and they aren’t afraid to deploy Brown just because he’s a smaller wideout. The upside outweighs the downside.”

“He’s a playmaker,” said Ravens General Manager Eric DeCosta, after making his first pick as GM. “He can catch screen passes, he can run reverses, he can run deep, he’s got outstanding hands, I think he’s tough. And he’s electric. We think he complements our offense very well, and our vision of what we want our offense to be.”

Being picked by the Ravens was emotional for Brown, who was in tears as he walked to the podium in Nashville to be greeted by NFL Commissioner Roger Goodell.

“I mean, three years ago, I had no food, I had no offers, I had nothing,” Brown said. “I was out there working at Six Flags working my tail off just to pay for my rent and for school. So, that moment just was surreal. People were always telling me what I can’t do, so for me to get drafted in the first round, it just means a lot to me.”

Brown is also coming off Lisfranc foot surgery. DeCosta said the Ravens are comfortable with the recent medical reports on the injury and expect him to be ready by the start of training camp at the latest. Brown’s agent sent DeCosta videos of Brown’s rehab during the pre-draft process.

“We’ve had players who’ve had this injury, the Lisfranc injury,” DeCosta said. “It’s a predictable injury. We feel really good about his prognosis long-term. He’s had a couple of different medical rechecks. … Conservatively, I think training camp we’ll have him back.”

“He’s the only wide receiver in this class that I feel great about in the first round,” McShay said. “I don’t know if I’ve ever evaluated a wide receiver with the better combination of quickness and speed than Hollywood Brown. This guy is unbelievable. After the catch, good luck. He does this over and over again and this is today’s NFL game. I don’t see receivers like this in the NFL draft very often.”

“I think he’s a perfect fit for what we’re trying to do offensively,” Ravens Head Coach John Harbaugh said. “If you don’t like scoring from 70 yards out, then you don’t want this guy. If you like a quick strike or a big play, this might be your guy. So we all kind of decided that we liked this guy.”