Your Morning Dump... Where we remember Hondo. 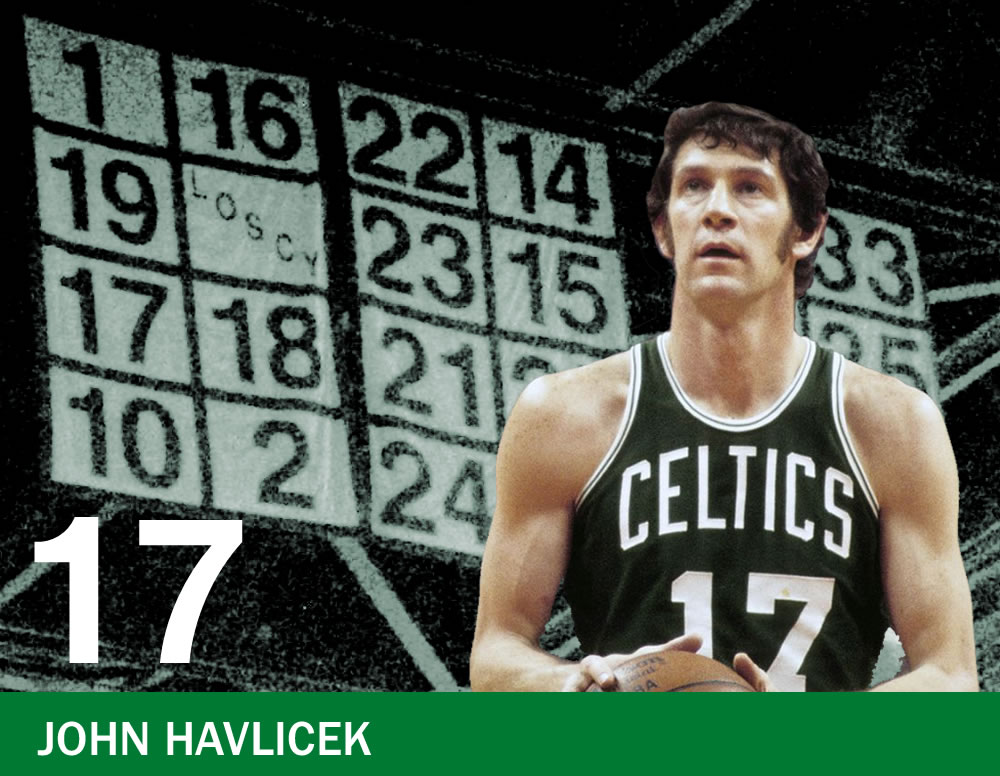 Your Morning Dump... Where we remember Hondo.

“John Havlicek, you knew he was focused. You didn’t have to go and give him the Knute Rockne story,” said Heinsohn. “Havlicek relished winning. He was the star of the team that I coached, him and Dave Cowens. Both of them were unusual players. Havlicek carried the team offensively. He was the backbone of the offense. He virtually made all of the big plays. Defensively, I can remember the first time we played a preseason game against the New York Knicks with [Julius Erving], and the first four times Dr. J tried to drive on him, Havlicek stole on the ball off him. We were raving about Dr. J and I’m thinking, ‘Wow, Havlicek’s got his number.’”

Havlicek’s most memorable moment, of course, might have been the 1965 Eastern Conference finals and the much-revered, “Havlicek Stole the Ball” sequence.

“Bill Russell made a boo-boo,” said Heinsohn. “He hit the guy wire while he was trying to inbound the ball and, if he gets the ball inbounds, more than likely we got a win. But he turned the ball over, so Philadelphia, with Wilt Chamberlain, has a chance to beat us. It was a one-point game at that juncture and they called a timeout.

“Russell got in the huddle and said, ‘Boy, did I screw up. Somebody get me off the hook.’ We broke, went out there, and Havlicek — a smart a defender as he was — he said to me, and said to everybody afterward, he was counting, ‘One, two, three, four,’ and, on four, he went to look for the ball and it was there. That’s how precise he was in defending, he made this great play, tipped it over to Sam Jones, and we beat Wilt.”

I never saw Havlicek play–but I’ve got a connection to him. He was my dad’s favorite player–and also my father-in-law’s.

Havlicek played sixteen years at a time when guys were doing well if they hit an eleventh years in the pros. This game used to beat the crap out of its players. Guys like KC Jones and Tommy Heinsohn only lasted nine years in the NBA before hanging it up.

For all the chatter you’ll hear from people who will watch the old clips and speculate that Hondo wasn’t all that great, here’s a bit of context: Havlicek still holds the Celtics’ record for points scored. Havlicek holds that record despite playing as a wing in an era where the go-to strategy in half-court offense was to get the ball down low to a big man, and in an era where there was no three point shot.

Yeah, when you compare footage of those guys playing back then with the games going on now, it’s easy to say that none of these guys would make it in today’s NBA.

But those guys back then were playing an 82 game schedule in every bit as cramped a time frame as teams play today–and they were taking trains and buses. Plane travel–when teams could afford it–was on scheduled commercial flights, and not always in first class.

The training staff was a guy with dubious antecedents and a supply of ace bandages.

Put one of today’s pampered players–with access to a fitness regimen and treatment based on actual medical science, arthroscopic surgery, chartered flights, and all of the little perks that come with being an NBA player in 2019–in the primitive environment of the 60s and even the 70s, and see how well he’d do.

Havlicek was only 79–and I’ll freely admit, I’m probably using the word ‘only’ because my dad’s 75. Like Heinsohn, Cousy, Russell, and all those other Celtics greats from that era, it feels like they should always be around to tell stories about what it was like back then, and it’s always a bit of a shock when we’re reminded that, no, they won’t be around forever.

Woodstock inspired Pete Townshend to write a song. “Baba O’Riley” is, according to Pete, “about the absolute desolation of teenagers at Woodstock, where audience members were strung out on acid and 20 people had brain damage. The irony was that some listeners took the song to be a teenage celebration: ‘Teenage Wasteland, yes! We’re all wasted!”

That song came out 48 years ago, and like the footage of Havlicek stealing the ball, it hasn’t changed at all–it sounds the same now as it did then. The lyrics have stayed the same–but the meaning’s changed. “Let’s get together before we get much older” was once a call to take advantage of the opportunities of youth, but now when a 75 year old Roger Daltry sings it, it’s a reminder that time makes victims of us all.

I didn’t get to see Hondo play–and the number of people who did is getting smaller every year.

But at the same time, we’ve all got at our fingertips grainy black-and-white footage–footage that makes us forget that the world was the same color then that it is now–of a guy just a week past his 25th birthday, with his whole life ahead of him, timing a jump perfectly and deflecting a pass to Sam Jones, who barely made it past the scorer’s table because the Celtics end of the court was full of fans.

In that clip, Hondo never ages, and Hal Greer–a ten time All-Star, a Hall-of-Famer in his own right, and the Sixers’ all time leader in points scored–is forever the victim. And somehow, it feels like that should be the real John Havlicek–someone forever young, running down the basketball court with easy grace, immune to the passage of time.

Boston.com: John Havlicek, one of the greatest Celtics ever, dies at 79

Boston Herald: Dave Cowens on John Havlicek: “You could always depend on him, no matter what”