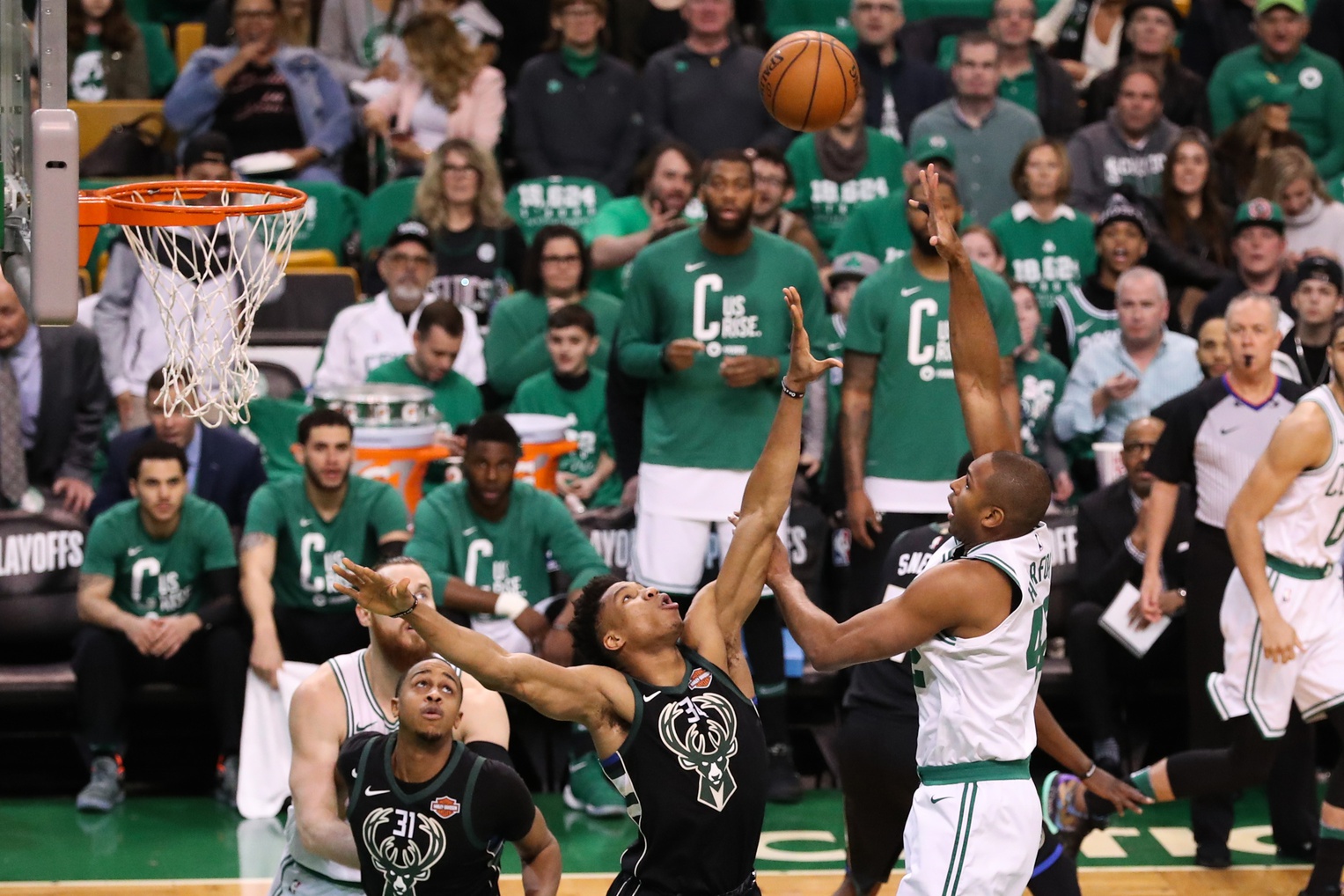 The Celtics exceeded our expectations (I had them in 5) with an opening round sweep of the Indiana Pacers. Up next, the juggernaut Milwaukee Bucks.

Most experts are picking the Bucks in a close series.  Here are our predictions:

Chuck M. – Celtics in 6
Read any expert analysis/prediction and you’ll quickly learn this series is about match-ups. Who outside of Al Horford will guard Giannis? How will the Celtics take advantage of Brook Lopez? Will Aron Baynes be effective? I’m not going to pretend to have the answers to any of those questions. Here’s what I know: the Bucks have been consistently good/great just about all season and the Celtics have not.

But…  there’s something about Milwaukee that won’t let me buy into their dominance. Maybe it’s the lack of big game confidence in their secondary stars (Eric Bledsoe, Khris Middleton). Maybe it’s that the Celtics, without Kyrie Irving and Gordon Hayward, beat most of these same players last year. I’m clinging to the notion that if Boston can punch Milwaukee in the mouth early (winning 1 of the first 2 games), the Bucks will rattle and collapse. I’m betting with my heart here and going Boston in 6. I can’t go 7 because the officials would never let Giannis lose at home in a Game 7.

Two factors: Home-court advantage, and the ascension of Giannis. This series should be an absolute treat and live up to all the hype that already exists, and that will continue to be generated over this long break between playoff rounds. The Celtics don’t look like the regular season Celtics, but the Bucks should look like the regular season Bucks, and that’s scary to think about. Even if the Celtics had won 55-60 games as expected and lived up to expectations, they’d still be starting this series as slight underdogs on the road because that’s how good the Bucks have been. The Brad Stevens’ Celtics have already been better on the road in these playoffs than in the three previous seasons combined, but a game seven against the conference’s best, with a crazed and hungry fanbase, is different.

Normally, Kyrie Irving is enough to tip the scales in a situation like that, but he isn’t the best player in the series. Giannis can’t hold a candle to Kyrie’s playoff resume, but I’m getting some Lebron in ’07 against the Pistons vibes here. Lebron willed the Cavs to victory over a deep and talented Pistons team and in the process laid claim to the title of Best Player in the League. If this goes seven, Giannis may do the same, and he’ll probably get ample help from the whistles that will send him to the line over and over. This series goes down to the final minutes. I hope I’m wrong, but I think the Bucks eek it out and advance.

Mike D. – Celtics in 6
There’s no sugar-coating it: Milwaukee was the best regular season team in the league, and they have the leading MVP candidate (Giannis Antetokounmpo, duh) who, in three games against Boston, averaged 31 points on 59% shooting while getting to the free throw line 13 times per game. He’s unguardable. The Bucks also still have known Celtics-tormentor Khris Middleton; they led the league in defensive rating at 104.9; and they upgraded to Mike Budenholzer, who will probably win Coach of the Year for the second time in his career. Beating the Bucks will be infinitely more difficult than it was last year.

However … against Indiana (by the way, third in defensive rating at 105.9), the Celtics had a different scoring leader each game, were 2-0 on the road, and finally looked like the cohesive group we expected all along. Playoff Tatum reappeared, Mook and Terry remembered how to play, and Kyrie and Gordon were effective weapons that weren’t even available last year. If all that wasn’t an illusion, then even without Smart, even without home court advantage, these Celtics should be highly confident. I see them winning one of the first two in Milwaukee, then successfully protecting home court, closing it out in Game 6 on the parquet.

Jeremy S. – Celtics in 7
I like any match-up where I think Al Horford, who’s still the most important player, can thrive. Folks have said not to sleep on Lopez as a defender, but I’m not buying it. The Celtics love to run circles around guys like Lopez, Mirotic, and Ilyasova, and I expect them to attack those three as much as possible in this series. On the defensive end, Horford’s versatility will force them to be innovative with their passing or efficient in isolation – two things I’m not sweating from that trio.

“These aren’t the same Bucks as last year,” only holds so much weight as a warning. We’ve seen Giannis, Bledsoe and – I cannot emphasize this name enough – Middleton carve us up before. God forbid Malcolm Brogdon comes back and starts hitting clutch shots, too. I genuinely believe the Bucks are the best team in the East, but I still believe in Boston’s ability to hunt match-ups and execute in tough, grindy 4th quarter chess matches. So against my better judgment, I’m taking Boston.