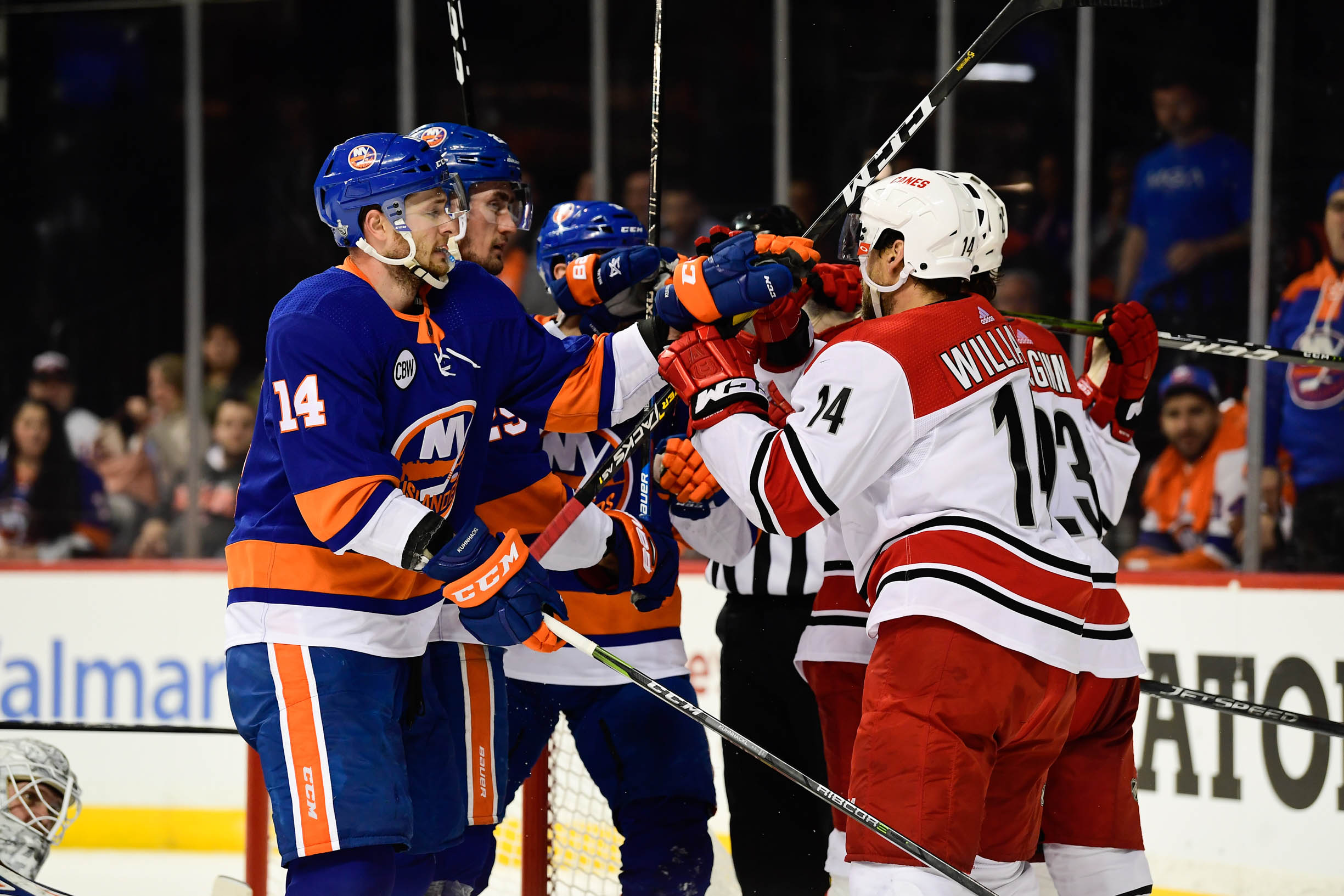 NEW YORK — For the first time in the postseason, the Islanders were on the losing end of a 2019 playoff contest.

The Islanders dropped the opening game of the Eastern Conference Semi-finals 1-0 to the Carolina Hurricanes in overtime. It was an unfortunate bounce off the end boards that resulted in a rebound goal for Jordan Staal and loss for the Isles.

It snapped a span of 64:04 in which neither side could find the back of the net.

On purpose? Accidental? Either way, the @NHLCanes are up 1-0 and are pumped about it. #StanleyCup pic.twitter.com/5BPnm8u95c

“Small margins in the playoffs,” said Robin Lehner, who made 31 saves in Game 1. “I thought we played a good game. They did, too. It’s going to be a tight series. We knew they were going to throw a lot of weird stuff… they win on a (expletive) bounce.”

The Islanders had played relatively well through most of Game 1 in Brooklyn. New York had outshot Carolina 23-21 through the first 40 minutes and generated a number of scoring chances, which forced Hurricanes’ starter Peter Mrazek to make several big stops.

Mrazek finished the evening with 31 saves as well.

“I thought our first period was pretty good,” Islanders coach Barry Trotz said. “The first six minutes of that period I thought we managed it well knowing that they’d come at you pretty hard. We were able to handle the pace and their pressure. I thought the next six minutes in the first we were actually really good.”

Friday’s Game 1 was the first the Islanders have played since they completed a sweep of the Pittsburgh Penguins last week. The Islanders have been waiting since then to face their second-round opponent, which took 10 days to finally face.

“It was good,” Anthony Beauvillier said about the Barclays Center. “The fans were into it. I’ve always liked playing at Barclays, so it’s going to be good.”

While there may have been some feeling out of the opponent, that wasn’t the feeling of the game according to Matt Martin.

“I think the emotions are pretty stable. We played a pretty solid game overall for having as much time off as we did.” @mattymarts17 #Isles pic.twitter.com/r9wT24ocFw

“One shot ends up in the back of our net.”

The Islanders did come close to scoring a handful of times during the 60-plus minute contest. Mrazek stonewalled the Isles several times, including on a breakaway chance by Josh Bailey that the Canes’ netminder grabbed with his glove.

In the second, the Islanders had a goal waved off for goaltender interference. Mathew Barzal clearly put the puck in the net, but because Lee made contact with Mrazek it was ruled goalie interference.

The replay appeared to show that Lee was pushed into Mrazek by a Carolina player.

“I think it’s a penalty,” Lee said. “There’s no replays. I’m looking back, looking at the play. I don’t know if I got pushed with the centerman there. I could have, but I haven’t seen it.”