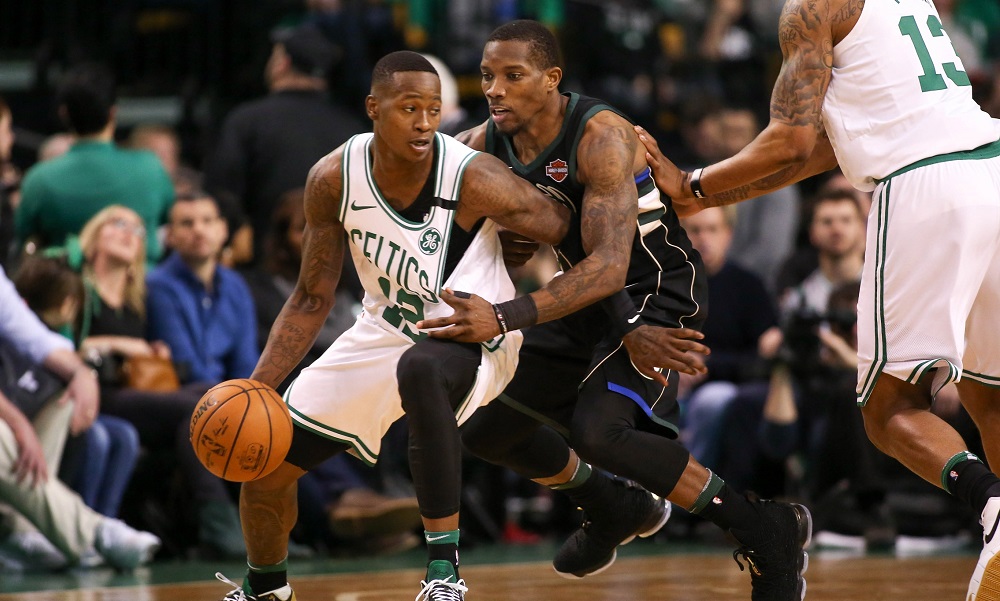 Rozier stepped up in a big way and provided a spark for the Celtics last year. Part of it was fueled by an ongoing feud he had with the Bucks’ point guard, Eric Bledsoe. The two were at each other for most of the series, and Rozier is expecting that battle to carry over into this season, Rozier said, per our own Chris Forsberg.

“Just two competitive guys. I’m pretty sure it’s going to carry over. That’s the sport, that’s for our fans, that’s what they want and what they need. I think it’s going to spice things up and make it a lot of fun.”

Rozier would later elaborate on that point and while he tried to shift the focus to other parts of the game, he did confirm that there would still be bad blood between the two sides.

“I said earlier, I can’t wait for it. It should be a lot of fun. I’m not going to speak too much on it. I don’t want to overtalk it. I’m not focused on me and him, it’s about us versus the Bucks. We’re going to take care of business as far as, like I said, me and him, we’re two competitors. If we get cool outside the lines, whatever happened in the summer, we seen each other, whatever. We get in-between them lines, we’re two guys that want to win for our teams. It’s going to be there — the bad blood is going to be there.”

NBC Sports Boston: Rozier on Bucks series: ‘The bad blood is going to be there’

There’s nothing like the playoffs to get players agitated with each other – especially when they have a history. It’s one of the factors that makes the postseason so deliciously intense.

Last year, Rozier got the upper hand because he was playing well in the starting role, and the Celtics never trailed in the series. It’s a bit easier to do your woofing when things are going your way. Rozier came off as the fun-loving “Scary Terry” who stomped on Bledsoe’s mojo:

On the flip side, Bledsoe was cast as the villain, a sore loser who lashed out, first in the media and later on the court:

The funny thing was that Rozier and Bledsoe didn’t start out as enemies.

The truth, Rozier says now, is that the two had become friends when attending former Celtics point guard Isaiah Thomas’s annual Memorial Day weekend charity basketball tournament in the Seattle area. When Rozier was drafted 16th overall by the Celtics in 2015, his game was sometimes compared to Bledsoe’s, so he sought him out at Thomas’s event after his rookie year and picked his brain a bit.

“Me and him, we’ve been cool,” Rozier said Wednesday, as their respective teams prepared to begin their rematch in the conference semifinals. “We still talk here and there. But none of that means nothing when you’re between the lines.”

Globe: A year after feud with Eric Bledsoe, Terry Rozier seeks another star turn vs. Bucks

That’s what the playoffs do to everyone. This year should have less drama because Terry has returned to his reserve role, and thus will match up mostly with the Bucks’ back-up point guard, George Hill. But, as we know, all it takes is one hard foul to start a playoff beef sizzling.

Related – MassLive: Boston Celtics Terry Rozier on rematch with Milwaukee Bucks: ’The bad blood is going to be there’  |  The Athletic: Bucks-Celtics Series Preview: Matchups, mismatches and what to watch for |  Series preview: Can Bucks duplicate their regular-season success against this new-look Celtics squad?

“He gets down the court in less steps than anybody I’ve ever seen,” Stevens said. “It’s amazing how much ground he covers. It’s incredible. That’s why any bad offensive possession can end up two dribbles later in a dunk the other way. That’s scary. That’s why possessions are ever so more important when you get to this point of the playoffs.”

“He’s up there with the best,” Brown added. “He’s up there with the LeBrons and whoever else you want to name. In terms of his tenacity and aggressiveness, I don’t think I’ve ever seen it. Like how he comes and just forces his way to the basket whether you stop him or not. I think he leads the league in charges committed, and he’s happy that he does because that’s just a form of aggression. So I tip my hat off to him. I actually really enjoy watching him play. But playing against him I’m going to have to be super locked in, as well as everybody else. We’re going to have to help when we need to be and really be connected.”

The NBA is obviously a star-driven league, and Giannis has all the necessary qualities:

The Celtics will need multiple defenders to tag-team the Greek Freak every game, but as the saying goes, you can’t stop him, you can only hope to contain him.

Last October, your friendly Red’s Army staff writers gave our predictions for the season, and one of the questions was, “Which team is the biggest threat to the Celtics in the East?” Everyone went for Toronto except yours truly, and since that’s the single thing I was right about all season, I’m bragging:

“The Raptors and Sixers are the consensus picks here, but the Bucks should not be overlooked. Have you seen the physique of Giannis Antetokounmpo after his off-season workouts? He’s a jacked Freak now. Despite Kawhi Leonard’s move to Toronto, Giannis is poised to be the best player in the east. Milwaukee also has a real coach now in Mike Budenholzer, not the fraudulent Jason Kidd or the overmatched Joe Prunty. The Bucks were a tough out for the Cs in the playoffs, and should be tougher this year.”

Milwaukee went from 44 wins and a 7-seed a year ago to a league-best 60 wins and a top-seed, so I hope the awards voters don’t overthink this. Giannis is the MVP and Budenholzer is Coach of the Year. Those are no-brainers – which will make it even sweeter when the Cs take them down. (Our Round 2 predictions will be coming soon.)

Rich Jensen provided thoughtful coverage yesterday of the passing of Celtics legend John Havlicek, but as someone who saw most of Hondo’s career, I’ll take this moment to offer one final word.

To me, Havlicek always embodied “Celtics Pride” – the never-give-up spirit and togetherness that Red Auerbach long ago instilled in the franchise. On the court, Hondo bridged the gap between the Russell dynasty and the two-time champions of the 1970s. Later, as a Celtics icon, he appeared at the Garden for various franchise celebrations, including helping the 2008 champs with their ring ceremony.

Havlicek was not only an incredible athlete but, by all accounts, a gentleman and wonderful human being. He sure did give Celtics fans reasons to be proud.

My only regret for No. 17 is that it seems he’s not well known by today’s fans. He didn’t stay in the league as a coach or executive, so people in general forgot, or never knew of, his many achievements. You’d think the man who was 8-0 in the Finals would be immortalized as The NBA Logo (not the guy who went 1-8). Alas…

NBC Sports Boston: Sorry to keep you waiting: Celtics’ Jaylen Brown emerges in playoffs after a rocky start to his season