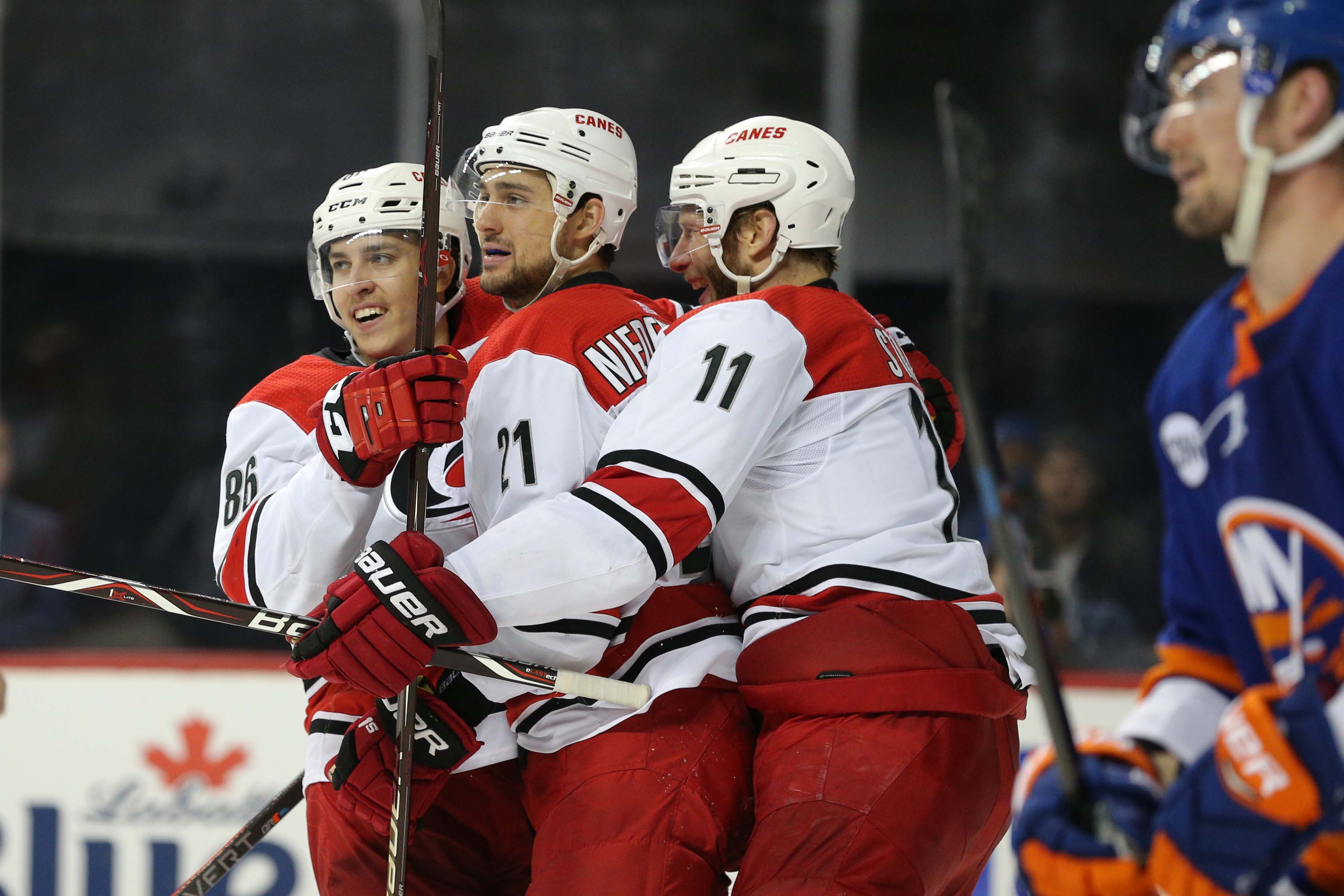 NEW YORK — The deck was stacked in favor of the Islanders.

The Carolina Hurricanes were down Trevor van Riemsdyk less than a minute into the game. They were down a goaltender in Peter Mrazek by the middle part of the second period and they lost forward Saku Maenalanen in the third.

However, it was the Islanders who were staring down the barrel of an 0-2 hole in the series by the time the final buzzer sounded on Sunday evening. A 48-second span in the opening minute of third erased a 1-0 Islanders lead and led to a 2-1 loss to Carolina in Game 2 of the Eastern Conference Semifinal.

“I think I’ve been using the term there’s an unseen hand that sometimes turns up and that’s what happened,” Islanders coach Barry Trotz said. “They had two shifts, good on them, they made good on it. We had a lot of chances to pull away in the game. They hung in there and we weren’t able to do it. They had 48 seconds of great hockey.”

It was Warren Foegele who evened the game at one less than a minute into the third period off a blistering wrist shot. Things didn’t get much better when former Islander prospect Nino Niederreiter deflected a shot past Robin Lehner to give the Hurricanes their first lead of the game.

The short span seemed to highlight a frustrating afternoon for the Islanders, who headed into the third period with plenty of hope that they would be leaving for Carolina with the series even at one. They had finally found the back of the net — albeit a fluky goal in the first period — and the injuries to van Riemsdyk and Mrazek appeared to only help the Islanders’ cause.

Alas, that wasn’t the case as the Islanders failed to build on their lead in the second period and then in the third they appeared to hit what felt like an endless number of posts and crossbars, denying them from evening the score at two.

The Islanders had a handful of juicy chances late in the game. Jordan Eberle rang the puck off the with just over seven and a half minutes left in the game. Later with under five minutes to play, Ryan Pulock and Anders Lee both hit the iron on back-to-back chances.

“Maybe a couple could have went our way that didn’t, but that’s hockey sometimes,” Josh Bailey said. “Just keeping going and stick with it, and hopefully a couple of them go in for us.”

"It could've been a different game, but that's hockey sometimes. We just have to find a way to regroup and get ready for Game 3. I'm sure we will be." – Josh Bailey #Isles pic.twitter.com/OSQjUNboSV

It was late in the second period where it seemed for a brief moment that the Islanders fortunes may have been turning. Devon Toews managed to knock the puck into the net in the closing seconds of the period but did so by kicking the puck in.

The goal was immediately waved off to the displeasure of the home fans.

The only goal that the Islanders did score in the game came in the first period of the power play. Mathew Barzal scored his first career goal in the postseason when a cross-ice pass hit the stick of Jacob Slavin and deflected into the net.

Barzal’s goal stands as the Islanders only one of the series through two games, with goals waved off in each of the two contests in Brooklyn.

Now the Islanders head to Raliegh, North Carolina down 2-0 in the series, a first for New York in the postseason this year. Still, the Islanders were trying to keep a level headed feel in the locker room after Sunday’s loss.

“It’s tough, but you have to win four to win a series,” Ryan Pulock said. “You don’t want to give up those two at home, but now we have to just bear down and find a way.”

The Hurricanes will likely be without van Riemsdyk for some time. Carolina coach Rod Brind’Amour told reporters that he “definitely wasn’t coming back any time soon.”

He had no updates on Mrazek or Maenalanen.