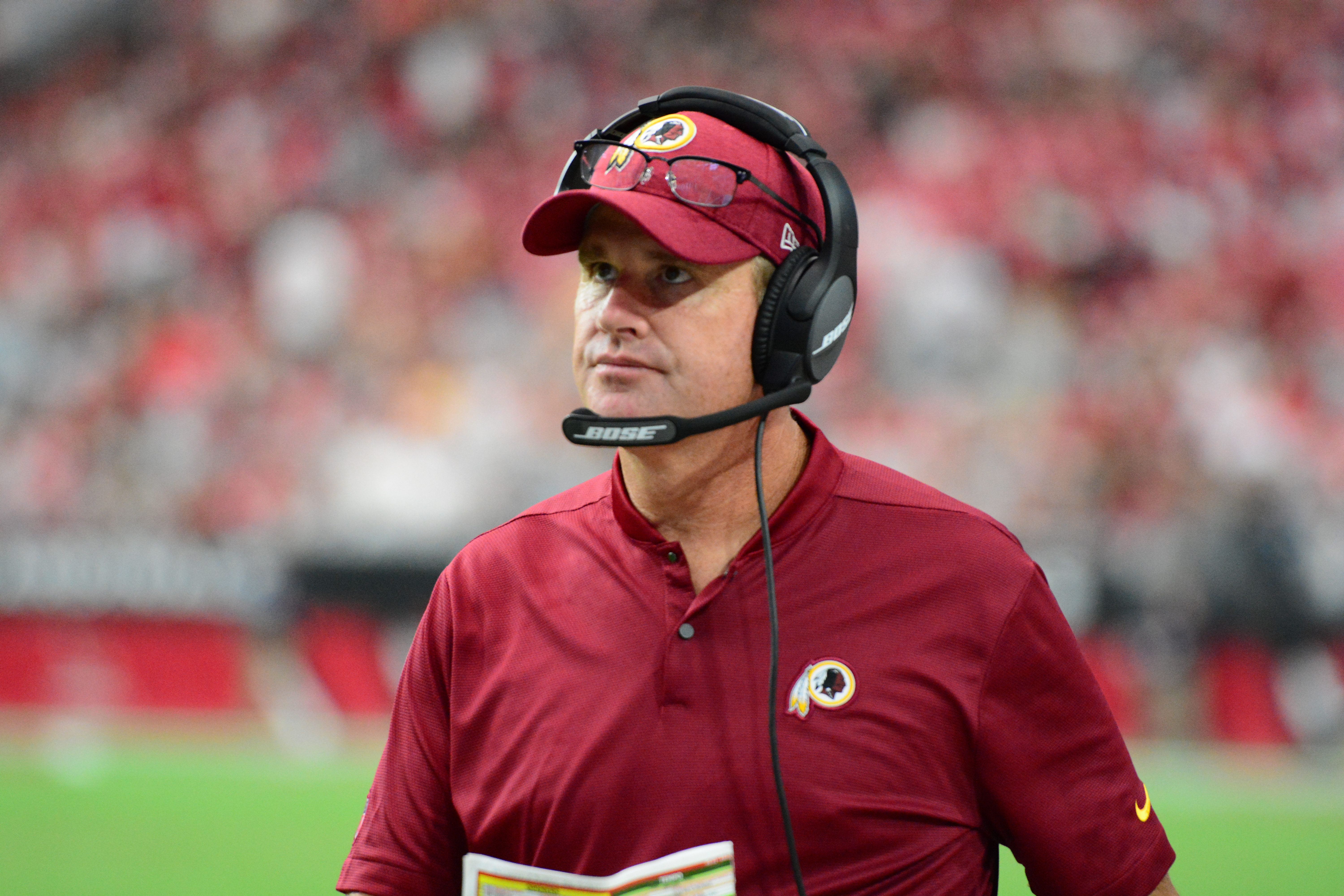 “It is over. How’d your mock draft do?” — Redskins Coach Jay Gruden

On the decision to draft RB Bryce Love coming off an injury:

“Yes, very talented. He had 2,000 yards in his junior year. He was not on that pace, but he was still pretty darn good. Unfortunately, he had the injury, but we thought when you go by the board he was ranked up there pretty high for us and he was available and we took him. Give him time to get better, number one. Get him in the building, get his rehab going in the right path, which it already is. The type of guy that he is, team captain. I think he’ll be ready in no time.”

On his expectations of Love participating in team activities:

“I don’t know yet. We have to get him in here first. We’re obviously aware of the injury. As far as the length of time it will take for him to be 100 percent in football shape, we don’t know that yet.”

“Derrius has been awesome. This is no reflection of anybody. We just got an opportunity to draft one heck of a player with an unbelievable production at a big-time school. But, Derrius is on track to be full-go soon.”

On if Guice is expected to be ready before training camp:

On plans to address the free safety position:

“Yeah, we still have Montae [Nicholson]. We obviously drafted [Troy] Apke last year, which is a pretty good option. We have [Jeremy] Reaves here in the building. He’s doing some good things, did some great things at the end of the year on practice squad. And Deshazor [Everett] and Landon [Collins]. So, we have five pretty good safeties. We’ll address it probably as the college free agents go. We’ll probably get a couple there.”

On the status of S Montae Nicholson:

“We’re just waiting to see what happens. But, yeah. I think he should be ready.”

“We’re going to come in and battle everywhere really. We haven’t had the chance to see these guys in pads yet or anything like that. We just had a nice draft, took a great guard, a very productive guard. Played a lot of snaps at left guard, which obviously we had some issues at that position. Ereck [Flowers] was brought in here. He’s never played guard. Wes has obviously been doing it for a long time. We’re hoping that athletically, the skillset that Ereck has, he can do that. But Ereck is also a good tackle. So, we have some options there. We’ll look at all of them.”

On if G Ross Pierschbacher is an option at left guard:

“Yeah, he played guard at Alabama and he transitioned to center this year. And versatility on that front, we’ve mentioned it many, many times how that comes in handy throughout the course of the season. Ross has played some big time games and has played both positions, so it’s great to have that luxury of versatility.”

On the status of QB Colt McCoy:

“He’s in Texas right now and he will be back here probably next week to get everything checked back out. I think we’re hoping that he’ll be ready sooner than later. I don’t have the exact timeline though.”

On the reason for McCoy’s additional surgery:

“He had an issue that they had to go back in and just check some things out. It wasn’t a major surgery, but it was a surgery and it’s going to take a little bit of time to heal. Some things popped up in there that we weren’t expecting. But he’ll be in the process of recovering and rehabbing here soon.” 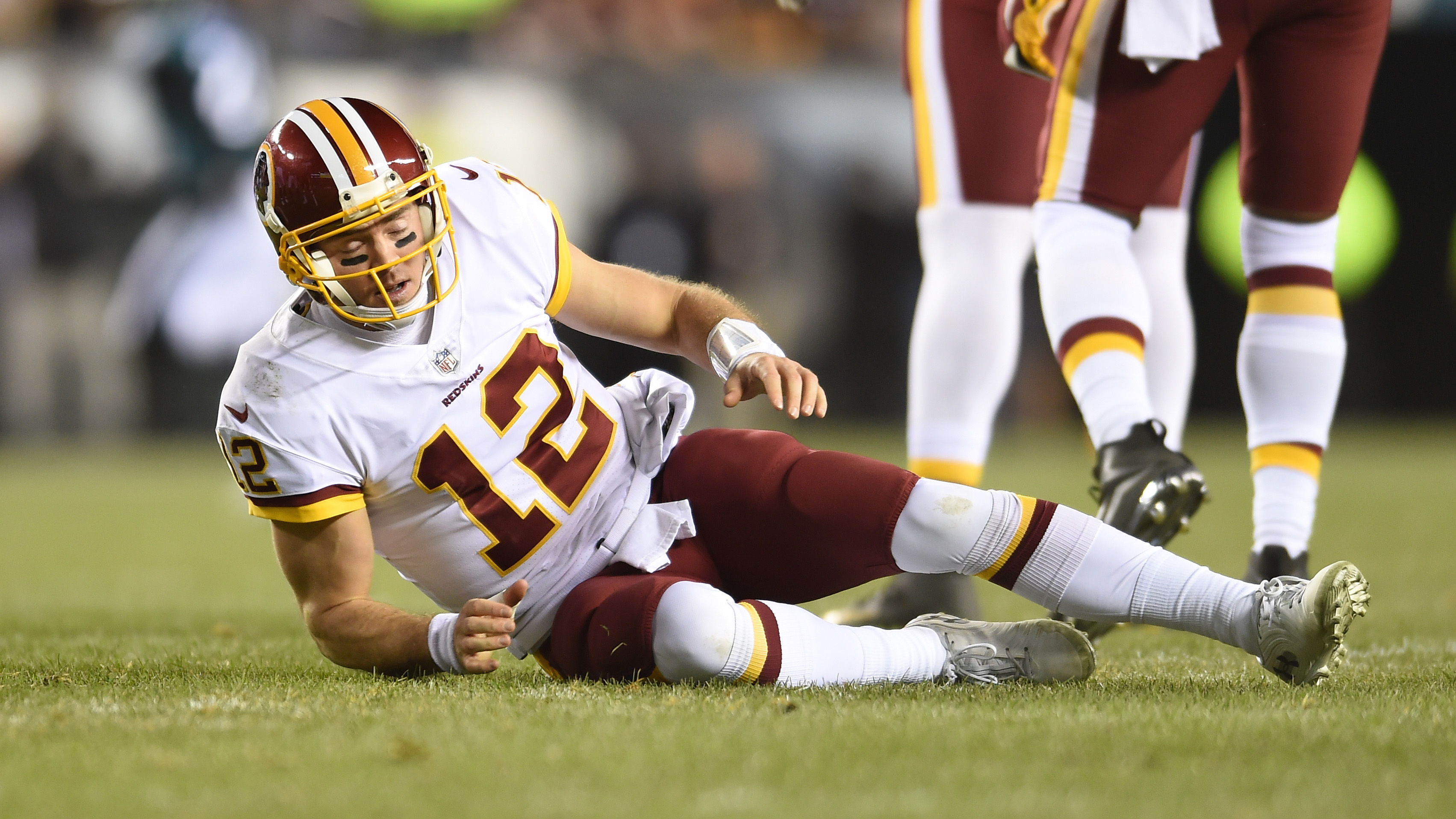 “He’s a playmaker. He’s player of the year in his conference. He’s a team captain and I like the fact that he gets his hands on a lot of balls. He’s very talented, he’s quick, quick-twitched. He played corner. He played some nickel in the bowl games that he played in, moved around a little bit. I think as far as crystal balls concerned, you’re going to look at him at both corner and nickel. I think he’s got the skill set that fits nickel extremely well.”

On if QB Dwayne Haskins urged the team to draft him:

“Everybody wants to be drafted. They say that. He said that to all the teams probably.”

“Yeah, very surprised he was still there. We really like Harmon a lot. He’s another productive guy. The guys we drafted here are all productive players. You look at Wes [Martin], he’s played a lot of football. Obviously, [Cole] Holcomb is a three-year starter at North Carolina, hundred plus tackles every year, very productive. Harmon, very productive, 177 catches. [Jimmie] Moreland, obviously, great. [Jordan] Brailford who we got late here was productive, led the Big 12 in sacks. The name of the game is being able to produce where you’re at and then displaying the skillset in the offseason or at the Combine or your workouts or your Pro Days or senior bowls. Then we have an opportunity to take you, but we like all their skillsets and production.”

“Well on game day you dress five receivers and you usually use at least four of them and sometimes your fifth one might be a special teams ace or what have you. But four of them are going to get into the game a lot. I think their skillsets will be used appropriately. Harmon, despite his so called ’40-time,’ he can still run down the field and make some plays. You see him make some plays on deep balls all the time. He may not get great separation, but he’s got great leaping ability, he times it great, he’s got big, strong hands and he’s physical. He’s also a great blocker as well. Terry is another guy that can take the top off, but he’s run all kinds of routes. He’s run shallow crosses, he’s run stuff across the middle. They are both very versatile in their route tree. That’s why we like them. They don’t just run bubble screens and hitches or go-balls. They run a little bit of everything. N.C. State had a great passing game and he [Harmon] was a big part of it without a doubt and ran all kinds of different route combinations and routes. So they are both very diverse in what they can do.”

“Well when you’re looking at linebackers this day in age, you want to make sure they have the ability to cover in space and that’s what his gift is. He’s very good out in space. They [North Carolina] asked him to play a coverage out there where he’s got to take the number three receiver and take him to the flat, take him up the field but also play the B-gap and that’s not easy for a linebacker to do. Sometimes it will look like ‘Well, he’s not running.’ But this guy can cover out in space. I think he’s got the physicality to him. I’ve seen him take on blocks and do some great things in that regard. He had 22 tackles against Army. I saw that game and watched a lot of him and I just wondered why he wasn’t as highly touted as a lot of these other guys because he has the speed. He ran a 4.48 I think at his Pro Day, like a 38-inch vertical. He tested out of the moon, so you say ‘Oh, he’s just a tester.’ No he had 100 tackles three years in a row. So, he’s 300 tackles at North Carolina. He’s had production, so I think it’s a great pick in that spot and I’m excited to get him in here.”

On if Holcomb can call a defense:

“He’s very smart, yes. He can do whatever you want.”

On how he views the defense right now:

“I’m excited about it. It starts with that and Landon [Collins] at free agent. That’s obviously the tone-setter we were looking for. Then, getting some of the guys back. Obviously, Reuben Foster is a wild card for us. We’re excited to get him in the building. We’re teaching him the defense right now, getting him on the field. We can’t wait to see him run around. Shaun Dion [Hamilton] with a year under his belt, it’s going to be great. Some of the draft picks that you mention, the young defensive line that we have. I think we’re all very excited about the prospects of our defense being fast and physical. The cornerback situation with [Quinton] Dunbar coming back and Fabian’s [Moreau] versatility. He played nickel – inside or outside and adding [Jimmy] Moreland and Danny Johnson and the other guys getting more experience. I think things are looking up. We have to go out there and play and play together.”

On if using five picks on offensive players was planned or where players fell on the board:

“Yeah, a little bit of both. I think there were talks with all of those picks to take defensive players, but we just thought the best player at that time was the offensive player that we took. We just kind of went by the board. Like I said, Kyle Smith and the scouting staff did a great job. Bruce [Allen] did an excellent job of picking the right guys. Time will tell, obviously, but we’re excited about the guys we have.”