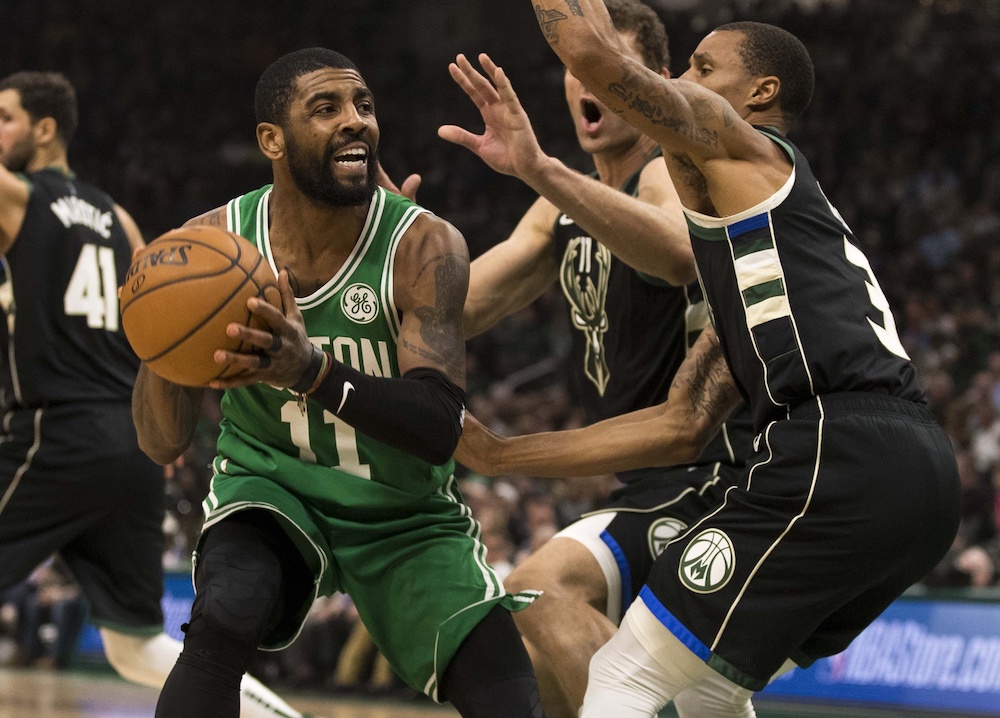 “… We’ll look at film, but I think I already have a clue of the way I want to play going into Game 3.”

Those are the words of someone who has experienced the ups and downs of playoff basketball. And the evidence suggests Irving is wise not to hang his head.

Here’s a look at Irving’s last five playoff games following a postgame loss, dating to the 2016 NBA Finals when he was a member of the Cleveland Cavaliers.

That’s an average of 36 points per game on 57 percent shooting in Irving’s previous five playoff games immediately following a loss.

That quote from Stevens… I would say “hey, no pressure, Kyrie” but the bar is quite low. Like, If Irving submits a 5-16 shooting line tomorrow night he’s totally in the clear and Brad is vindicated.

It’s a testament to who Kyrie is as a basketball player — both on paper, as Chris Forsberg lays out the numbers for us in those previous five playoff games after losses, and, in essence. Kyrie is usually bona fide killer when he really wants to be — that when we hear him promise he knows what to do, and we hear his coach confidently claim he’s going to do it, we believe it.

The only thing that puts the tiniest shred of doubt in my head is that he’s got a pretty legitimate opponent on the other side of the court that has the ability to make things really tough for him. Eric Bledsoe is a fantastic on-ball defender, the Bucks have loads of length near the basket, and Mike Budenholzer’s scheme seems hell-bent on having other Celtics make shots.

Looking at those last five Kyrie playoff performances after a loss, one thing is clear: Kyrie shoots the ever living shit out of the ball in these bounce-back games. Save for his 19 point anomaly on 8-23 shooting, that tends to go really, really well. But what if Irving starts 0-4 tomorrow night? You tend to want a guy like Irving to shoot himself out of such a start, but that didn’t work two nights ago. Brad called 4-16 an anomaly, but what if the degree of difficulty the Bucks are imposing on Irving actually makes 4-16 more of a reality? Will Kyrie adjust and impose his will on the game in other ways? On Tuesday he didn’t. On Friday, whether it’s a better shooting night, or a better passing night, he must.

On page 2, Giannis says he doesn’t like it when the Celtics defend him

Antetokounmpo later told Goodwill that you can’t complain to the refs.

“You gotta play,” Antetokounmpo said. “It’s not gonna be easy. That’s what basketball is about: Nothing is easy. When they hit you, you gotta get back up and keep moving.”

The interview with Vince Goodwill from Yahoo Sports seems to end there, but I got access to the extended version and here’s the transcript:

“One more thing, Vince. When they hit you, sometimes you have to take steps in order to avoid it. Often, you take more than two steps. Sometimes three, sometimes five, you even take seven steps sometimes.

You gotta play. It’s not going to be easy to travel so much. That’s what breaking the rules is about. When they hit you, you gotta get back up and keep moving… specifically keep moving without dribbling the ball taking many steps at a time.