Your Morning Dump... Where the Celtics are renting space in Giannis' head 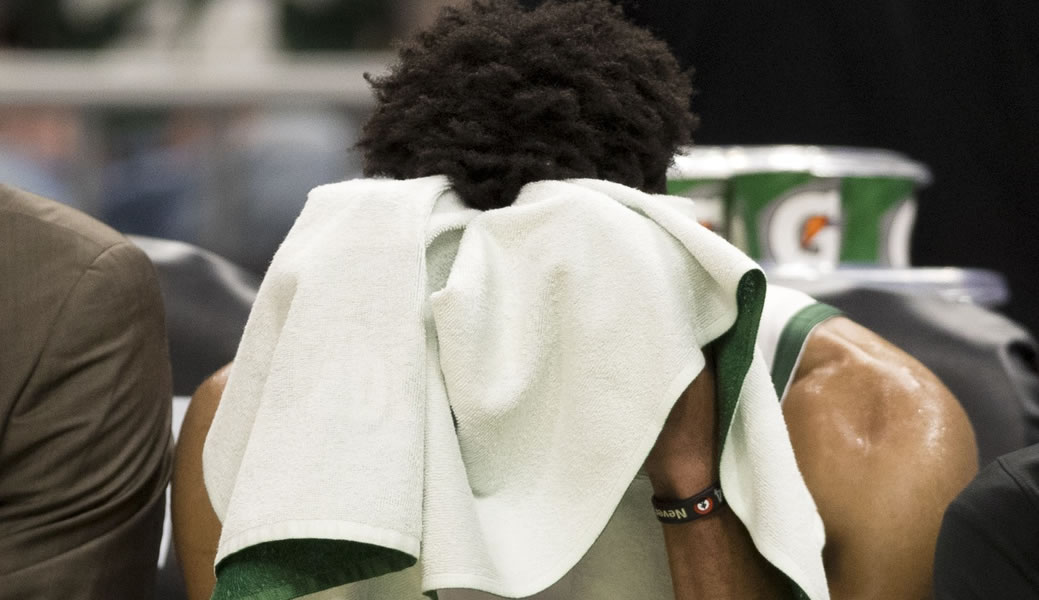 Your Morning Dump... Where the Celtics are renting space in Giannis' head

Marcus Morris heard about Giannis Antetokounmpo accusing the #Celtics of excessive fouling. "Please! Borderline not fouling his ass, with him getting calls," Mook said. "That just shows we're probably getting to him by now."

During the regular season, Antetokounmpo averaged 9.5 free throw attempts per game, which ranked third in the NBA.

In the playoffs, that number is up to a league-high 11.8 attempts per game.

And in the two games against Boston, Antetokounmpo has averaged 14 free throw attempts per game.

To put that in perspective, Antetokounmpo is averaging just 3.5 fewer free throw attempts per game than the entire Celtics team in this series.

Morris acknowledges that the Celtics have tried to be physical with Antetokounmpo, which he says isn’t all that different than their approach defensively against him and any other upper-echelon player in the NBA.

That’s why when he saw Antetokounmpo’s comments, he thought it was funny.

“You can’t even,” Morris said before making a blowing motion in the air, “it’s a foul.”

Morris added, “That just shows we’re probably getting to him by now. He’s a great player; he’s been playing well. Probably MVP, if not number two.”

Frankly ,this is exactly where you want to be if you’re the Celtics. An element of good defense is finding out early just how much contact the refs are going to allow, and then sustaining that level of physicality. Given that the C’s effort on defense was up and down most of the regular season, it’s been refreshing to see them sustain that effort through the first 5-1/2 games of the playoffs (I’m letting the second half of game 2 slide).

And but me no buts about how physical defense ‘uglies up the game’, because, for my money, superstar officiating is ugly, although the league tacitly encourages it because it leads to fun highlight clips that can be consumed by people who don’t have to sit and watch 48 minutes of LeBron or whoever cringing and grimacing and wincing every time someone so much as gives him the stink-eye.

The Celtics are doing what they need to do to win this series, and Giannis is not doing what he needs to do to get the Bucks to the next round.

Bottom line is that if Giannis is thinking that much about how the Celtics are playing him, there’s that much less room in his brain for other more important things.

Marcus Smart progressing… That's a dunk at the end! pic.twitter.com/8aAehXEmKl

Smart still hasn’t progressed to five-on-five work. The pain has subsided, but it’s still there. Mild contact is bearable now, as opposed to the excruciating pain a little bump could produce two weeks ago.

Count me as one of the guys who’s never really bought into that 4-6 week timeline.

That Marcus is now able to dunk the ball–with a bit of rotation during the leap–suggests that, as would be expected of a guy in his mid-20s, his muscles are, in fact, healing.

However, he looked really uncomfortable dunking the ball, and that was hardly a game-speed maneuver. If the Celtics get him back for any of this series or the next, I’d be surprised.

Smart, the longest-tenured Celtics player, who has one of the tightest bonds with Ainge, is rooting for a quick recovery.

“Danny is just one of those guys who takes time out of his life, his day when he’s doing his schedule to make sure you’re all right,” said Smart. “He constantly checks in on us, my family, and things like that. Just personally for me he’s been another mentor for me. From when I first got here Danny was the person I see every day and am talking to, so he means a lot to my life as well. So like I said, I just hope he has a speedy recovery.”

Just ten years and two weeks after his first heart attack, Ainge suffered another one in Milwaukee.

From time to time, I’ve mentioned that Ainge does a remarkable job making his job look easy–why else would guys like Thibs and Rivers think they could do his job and theirs at the same time?

But that job is incredibly stressful–and even more so if you’re going to do it right.

Fortunately, Ainge is–apparently–smart enough to play it safe with these things. Too often, guys will ignore early signs of heart trouble–only to pay the price with a massive heart attack that comes ‘out of nowhere’ because they didn’t get proper care early.