Who Will Ken Holland Tab As Oilers Coach? 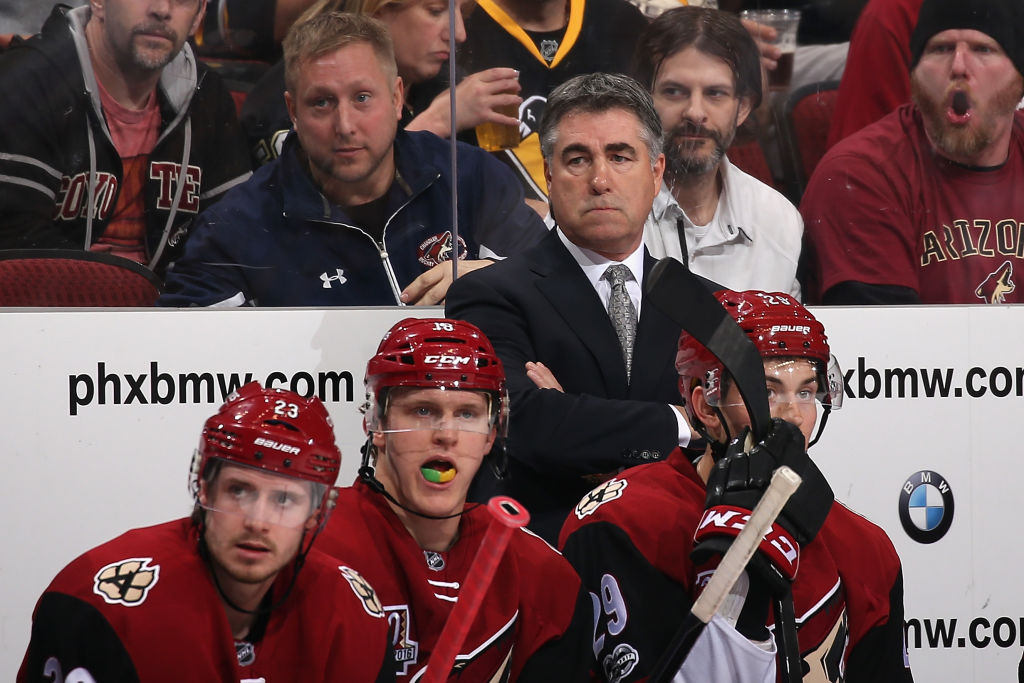 Who Will Ken Holland Tab As Oilers Coach?

Ken Holland wasted no time in announcing that Ken Hitchcock will not return as the Head Coach of the Edmonton Oilers for the 2019-2020 season. In fact, official word of Holland’s decision leaked out before he was even officially named the new President of Hockey Operations and General Manager of the club on Tuesday morning.

Holland, in his own words, proclaimed that there will be changes within the organization. The first, and likely most important, change will come behind the bench. With Hitch out of the picture, speculation can begin as to who Edmonton’s new bench boss will be.

TSN insider Bob McKenzie had this to say last night on the network’s airwaves, via Zach Laing.

.@TSNBobMcKenzie just said on That’s Hockey he thinks Holland will have a list of four to six names to work through for #Oilers HC; expects a hire to be done in two to four weeks.

The timeline for hiring a new coach, two-to-four weeks, would indicate that Holland expects to have his first bench boss in Edmonton in place by the NHL draft in late June. That makes a lot of sense, mainly because that weekend is likely to be the start of a busy off-season for Holland and the Oilers,

It isn’t imperative that a coach be in place for the draft weekend trades or free agent signings, but it certainly helps. Guys want to know who they will be playing for, and by extension what kind of system they will be asked to execute. Coaches can be a great recruiting tool, and not having one would be a loss for Edmonton.

One of the things Holland did so well in Detroit was build long-term relationships with his coaches. Scotty Bowman was already on staff when Holland was promoted to GM in 1997, but they worked together through the 2002 Stanley Cup victory, when Bowman officially retired from coaching. After two years with Dave Lewis at the helm, Holland hired Mike Babcock.

After a little over a decade behind the Red Wing bench, Babcock moved on to Toronto as a free agent and gave way for Jeff Blashill, who has run the Detroit bench for the last four seasons. When Holland hires a coach, it’s for the long haul. He doesn’t panic and fire a guy a year or two into the job normally, which should bring much needed stability to the Oilers.

So, who can we expect to see as part of the process in Edmonton? Holland’s own history would indicate that anyone with ties to him has an inside track at this job. He was very familiar with all three of his coaching hires (Lewis, Babcock, Blashill) with Detroit, and it stands to reason he will stay in his comfort zone in Edmonton.

Veteran coach Dave Tippett has never worked for Holland at the NHL level, but the two of them have been involved in Hockey Canada ventures and Tippett is seen as a top candidate around the league. The veteran bench boss previously was coach in Dallas and Arizona, and led both of those franchises to appearances in the Western Conference Final. Tippett has never made the Cup Final, however, and missed the playoffs in each of his final five seasons in Arizona. He’s currently an adviser with Seattle’s expansion group.

I’m not huge on Tippett, mainly because I don’t think his defensive style fits the new direction of the game or Edmonton’s roster. That said, Tippett did routinely get understaffed Arizona teams to preform above their expected levels and that has to count for something.

Another veteran coach with Holland connections? Dan Bylsma. Currently an assistant in Detroit, Bylsma won the Stanley Cup as the lead man in Pittsburgh in 2009 and helped guide Sidney Crosby and Evgeni Malkin to consistent playoff appearances. His rough two-year stint in Buffalo taints his record a little bit, but Bylsma knows offensive hockey and how to handle superstar players in the modern NHL. He’ll likely garner serious consideration.

Another former Detroit assistant, Paul MacLean, could be an option for the Oilers as well. MacLean did an excellent job with Ottawa and won the Jack Adams Award as coach of the year following the 2012-13 season. Ottawa made the playoffs in two out of three seasons with MacLean behind the bench, and after being fired he went on to Anaheim as an assistant under Randy Carlyle.

Those three veteran names should, and likely will, be involved in this process. Other candidates include former Oilers interim coach Todd Nelson, who worked under Holland for three seasons as head coach of the AHL’s Grand Rapids Griffins. Toronto assistant DJ Smith, who has worked under Babcock the last few seasons, could garner interest as well. His name was connected to Edmonton earlier this month.