Wizards should not trade Bradley Beal unless given historic haul 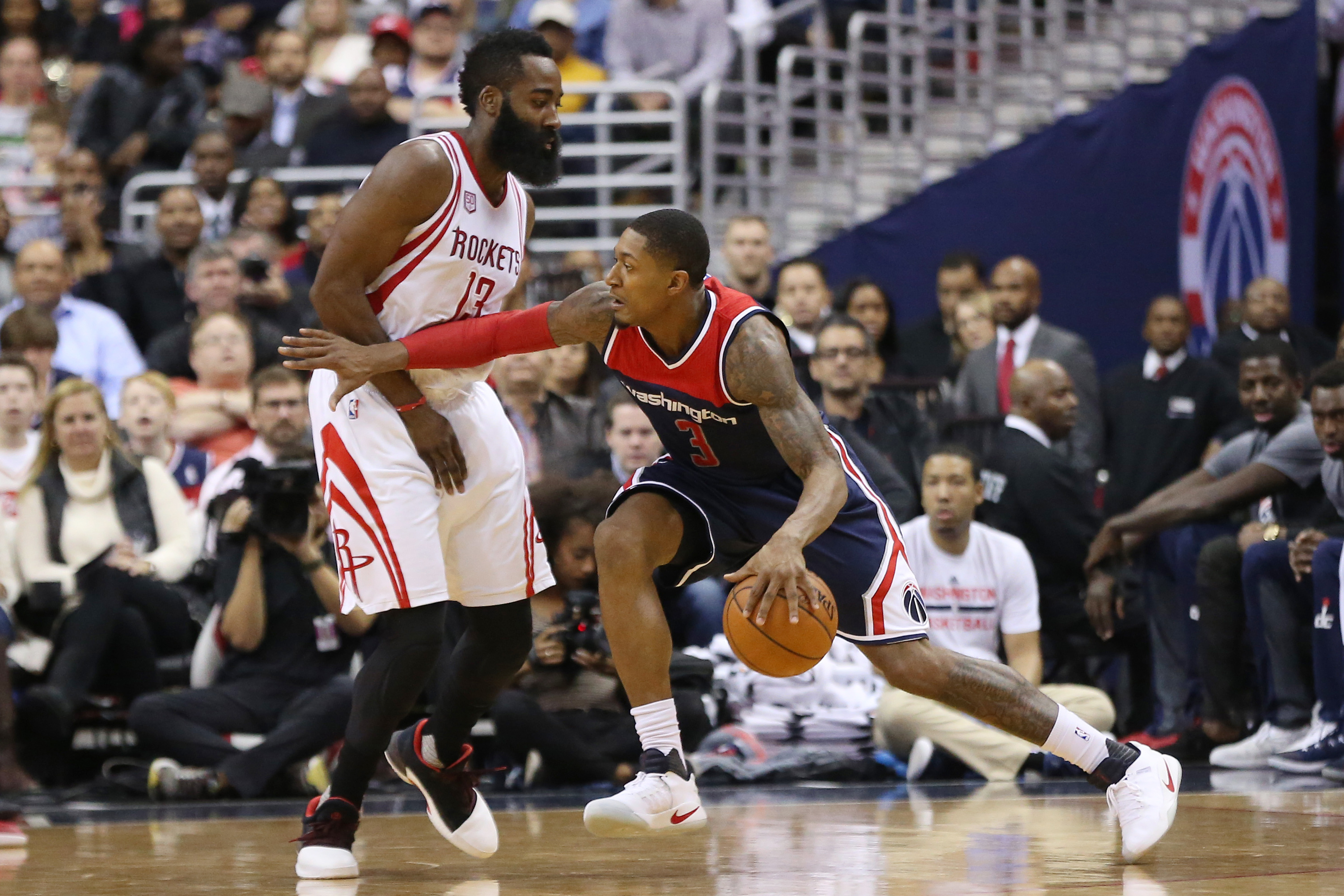 Wizards should not trade Bradley Beal unless given historic haul

The Washington Wizards remain in the limbo that is NBA purgatory. They will not be competing for an Eastern Conference Finals berth (let alone championship) for the near future, but they also will not embrace a full-hearted tank unless majority owner Ted Leonsis changes philosophy. Leonsis treats the Wizards like a business that he wants to keep as profitable as possible. That means staying competitive and explains a lot of Washington’s win-now moves under former team president Ernie Grunfeld. Unless the next front office head convinces Leonsis into a change of heart, Beal (who Leonsis has promised a say in things) will likely remain in D.C. That is not a bad thing.

Bradley Beal said Ted Leonsis is going to keep him heavily in the loop this offseason: "He tells me he's going to keep me in his back pocket. I'm going to be in close contact with him throughout the process. Free agency and the draft process as well." pic.twitter.com/gFgWsAYt1C

It is easy to look at the Philadelphia 76ers and say they were able to turn themselves into Eastern Conference contenders just a few years after repeatedly residing in the cellar. After winning just 10 games during the 2015-16 season three years ago, the 76ers have put together back-to-back 50-win seasons, something Washington has not done in decades. They may not be making it any further in the playoffs than the Wizards have in recent years, but they certainly had a rapid revival.

Moreover, not all rebuilds are always so straightforward, let alone successful. The Phoenix Suns have not been in the playoffs in a decade, the Sacramento Kings have not played in the postseason since 2006, and the New York Knicks have only won one playoff series in a season that started this century. Grunfeld no longer running the franchise is a good thing after countless head-scratching decisions, but there is no guarantee that Washington hires the next Pat Riley, R.C. Buford, Donnie Nelson, or Danny Ainge. There is no guarantee that the next team president will be able to navigate the Wizards out of salary cap hell and back into serious contention by drafting the correct highly touted prospects.

To me, that means you keep the known asset in the building, you keep the All-NBA caliber talent on the team. You do not trade Bradley Beal before he even reaches the peak of his career. At just 25 years of age, Beal had a career-year with 25.6 points, 5.5 assists, and 5.0 rebounds in 36.9 minutes per game. He has proven he can stay on the court after missing 81 games in his first four seasons as he has missed just five games in his last three seasons. The shooting guard is one of the top-20 players in the NBA and could continue to grow into a top-10 player in the league soon enough. He is arguably the second best shooting guard already behind reigning MVP James Harden. To me, you cannot trade someone this good when he is only going to get better.

Beal has grown on the court every year of his career through offseason work with Drew Hanlen and he took a massive step off the court this season with his leadership in the locker room as well as the community. Despite seeming like the running joke of dysfunction nationally (some of which was stemming from Grunfeld’s mediocre performance), Beal was the respected leader in the locker room and led the young bucks like rookie Troy Brown Jr. and second-year center Thomas Bryant. Washington missed their window in the Eastern Conference by thinking Beal alongside John Wall were ready to lead on their own three years ago, but now Beal is ready to answer the call.

Troy Brown Jr. on Bradley Beal serving as a role model: "He leads by example. There's days that he'll play back-to-backs and then still show up to optional workouts. … 'I appreciate you as a vet because your somebody that definitely is a great role model.'" pic.twitter.com/PreYosshqh

If Beal makes an All-NBA team this season the complications begin. If he is one of six guards given the honor behind James Harden, Damian Lillard, Steph Curry, Russell Westbrook, and probably Kyrie Irving, then he will be eligible for the same supermax extension that Wall signed two summers ago. As an aside, don’t blame Wall or the organization for a now onerous contract after two significant and mostly bad luck injuries. Should Washington not offer Beal a four-year, $190+ million extension this summer, then you create friction. With Wall possibly out for all of next season, Beal has a chance to put up even better numbers then, make an All-NBA team then, and be eligible for a five-year, ~$250 million extension then. The Wizards are already in a bad way with the salary cap next season with less than $20 million in space with only five players on guaranteed contracts.

What could Washington even receive if they traded away Beal with two years left on his contract at less than $56 million?

Unless Washington is offered some combination of three first-round talents, whether it be three picks or two picks plus a former first-round pick from the past couple years that has shown promise, etc., I would not even field calls for Beal. The 25-year old has been saying all the right things about being loyal to the Wizards so the team should not actively try to shop him. Heck, the organization does not even know who will be calling the shots next season. Tommy Sheppard is operating not knowing if he has a tomorrow with the team. He will be in attendance next Tuesday when the 2019 NBA draft order is set, but only Leonsis knows how much longer after that. Days, weeks, months, years? Waiting until after the June 20 draft to potentially deal Beal is not a position of strength. At that point, you might as well wait until Beal reaches the last year of his contract. By then, the market will still be strong and the team will know what level Wall will be coming back at post-Achilles rupture. In short, do not trade a franchise superstar unless a team wants to give every asset they have.