Packers Counting on Young Receivers to Step Up in Year Two 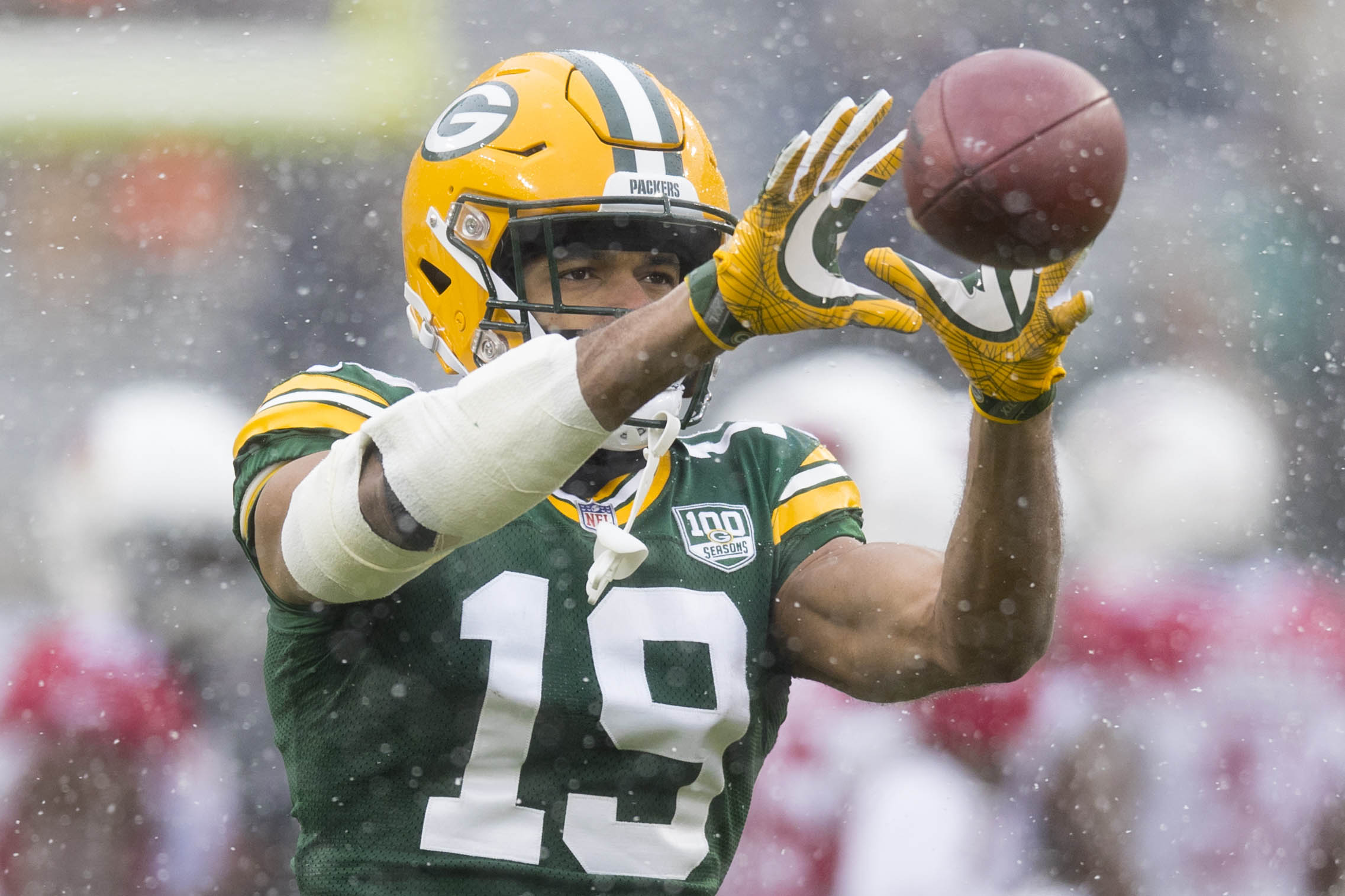 Packers Counting on Young Receivers to Step Up in Year Two

The 2019 Green Bay Packers receiving corps looks very similar to the unit that finished the season in 2018. Randall Cobb has officially departed, but Cobb missed big portions of 2018 due to injury. The Packers did not make any major additions at the position in the draft or in free agency. Instead, they are relying on the younger players on the roster to take a step forward in their development in their second season to fill in the gap.

“You know, I’m really content with the three guys we drafted last year,” GM Brian Gutekunst said after the draft ended last month. “I think they have huge upsides; I thought they took really good steps last year… “It’s not like we wouldn’t add one if we thought the right guy was there, but I like that group.”

Here is an in-depth look at the Packers wide receiver situation as we head into OTAs and training camp:

Adams returns as the unquestioned top target for Aaron Rodgers. Last season, the Fresno State alum caught 111 passes for 1,386 yards and 13 touchdowns en route to a well-deserved Pro Bowl berth. He is the receiver Rodgers trusts the most and possesses a combination of size and body control that makes it difficult for defensive backs to cover him. He presently ranks among the top receivers in the game.

Any injury to Adams would be a big blow to the Green Bay offense as no other receiver on this roster comes close to his production level and ability at this time.

The favorite for the second receiver slot is veteran Geronimo Allison. Allison was off to a very good start last season but played only five total games due to a variety of injuries. He still grabbed 20 passes for a healthy 15.2-yard average and a pair of touchdowns.

If Allision can remain healthy, he has the potential to have a very productive season as the second receiver. He has good size and is a very consistent route runner who has earned Rodgers’ trust. Allison still must prove that he can deliver over the course of a full, 16-game season, but he clearly has the inside track at the second receiver position.

Here’s where the key battle shapes up. The Packers drafted three receivers in 2018 and they will be the top candidates to take over the third receiver position.

Marquez Valdes-Scantling put up the best numbers of the trio, finishing last season with 38 catches for 581 yards and a pair of scores.

MVS played his best football in the middle of the season, going over the 100-yard mark in games against the 49ers in mid-October and the Patriots in early November.

Valdes-Scantling has the speed to get deep and make big plays as evidenced by his 15.3-yards per catch average as a rookie. To solidify the third receiver position, MVS will need to do a better job of gaining his quarterback’s trust regarding to his route running and his ability to adjust when plays break down.

Of the three rookie receivers drafted last year, Valdes-Scantling adjusted to the NFL the quickest. “At the end of the day, (Valdes-Scantling) has been given some opportunities, probably more than we all anticipated due to the injury, and he’s just delivered,” coach Mike McCarthy said last season. “So, you can see with the success and the production he’s had, his confidence grows more and more each week.”

Equanimeous St. Brown also showed flashes of ability as a rookie and is another strong candidate to take over the third receiver spot. The Notre Dame alum made 21 catches last season for 328 yards for a 15.6-yard average. He did not catch a touchdown pass although he did break some big plays that resulted in long gains.

St. Brown was drafted last of the three receiver picks last year. At 6’5”, he is the largest of the three picks and he has shown the ability to use his size to make contested catches. The biggest issue for St. Brown in consistency, something the coaching staff is hoping will be more prevalent in his second season. As a rookie, EQ finished strong with a career-high five catches for 94 yards in his final game of the year against the New York Jets.

J’Mon Moore is often the forgotten member of last year’s draft class because he struggled the most as a rookie. Moore made only two catches for 15 yards all season. His biggest issue seemed to be picking up the offense and adjusting to the NFL game after a strong college career at Missouri. Moore and all the receivers will have to learn a new offense this season as coach Matt LaFleur installs his system.

“I didn’t pick up the offense,” Moore admitted late last season. “It took me a long time to understand a lot of things and do it the right way. You get chances and if you mess up those chances, it’s the NFL. They keep going. The other two rookies, they were able to catch on, understand it faster than me, which held me back.”

Once Moore picks up the offense, he has the physical tools to compete for a bigger role in this offense.

Other players on the roster are long shots to be the third receiver. Jake Kumerow is the most prominent of this group. He has size and a bit more experience than the three players drafted last season. After a strong preseason, injuries limited Kumerow to just five games during the regular season. He made five catches for 103 yards which included a 49-yard touchdown catch against the Jets.

When the dust settles and training camp is over, the Packers need at least one of these second-year players to take a big step forward in 2019.

Rodgers seemed confident that this will happen although he emphasized the young players need to earn their spot. “Respect is earned, respect isn’t freely given,” Rodgers said. “And I think with some of the young players, there is a greater sense of entitlement. It’s just the world that we live in. There’s a different kind of style coming in. But respect is always earned, and the opportunities to earn their respect are there from day one, meeting one, conversation one, and I look forward to seeing those guys grow this year.”