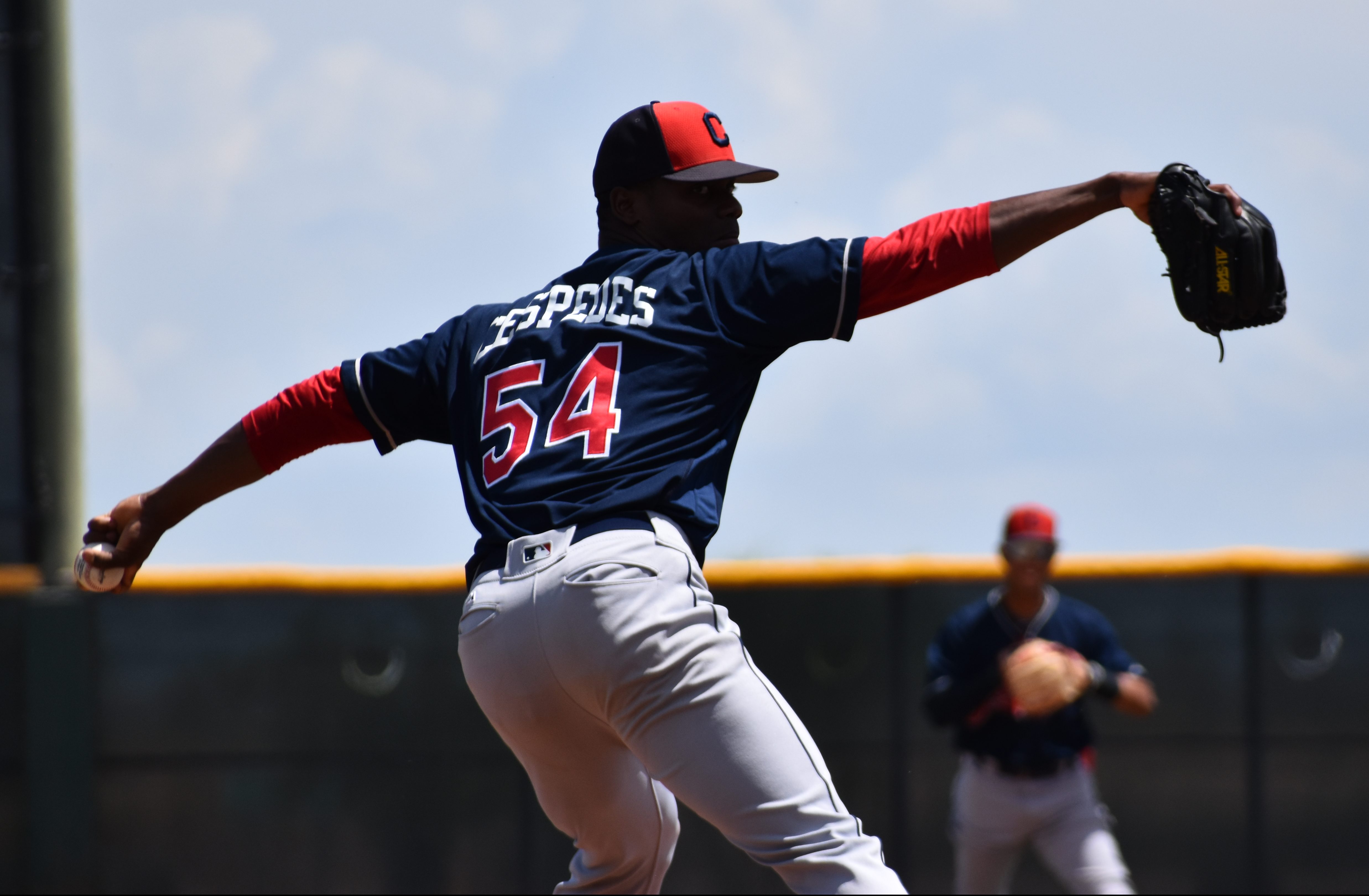 The youngest remaining Indians in extended spring had a great start to the week last Friday as they forced the Dodgers to roll multiple innings early on and scored often despite losing the extra outs. Most notably, this game featured the return of extremely high rated prospect George Valera. Valera started in center and walked in each of two plate appearances. Everyone in the line-up reached base by the fourth inning with all having hits except Valera and Marlin Made, who replaced Valera and also walked in his first at bat.

Cesar Idrogo and Jean Montero put together powerful at bats with drives to the wall that ultimately became a double and a triple respectively. Idrogo and Wilfri Peralta added steals as well.

On the mound, Wilmer Mejia had a tremendous start with three strike outs and three hits allowed in four shut out innings. Outfielder Andy Pages was the only Dodger to break through against Mejia with two doubles out of the three hits.

Team Red played again on Wednesday and Valera had another appearance as he works back from his hamstring injury. He walked once again and struck out twice, but most importantly was able to play half the game in center field before being pulled from the line-up.

Jose Medina also continued his rehab with a two run home run and a walk before being removed for Jhonkensy Noel. The star performer both offensively and defensively, however, was Brayan Rocchio. Rocchio reached base in all three plate appearances including a double, single and walk and made multiple above average plays at short stop before he was removed for Wilfri Peralta.

On the mound, the most important appearance was the start of Ethan Hankins. He is continuing to rehab and had some command issues during his inning of play. Hankins also was hurt by an error committed by an infielder, but aided by a double play that kept the Reds from scoring.

On Saturday, the future Mahoning Valley Scrappers of America were featured. The whole team got into the groove as all but two starters reached with a hit with Henry Pujols (who has since been promoted to Lake County), Pedro Alfonseca and Ronny Dominguez reaching via hit and walk. Alfonseca, Johnathan Rodriguez and Rocchio each had doubles (Rocchio had two).

Liam Jenkins started the game as he continues to get stretched out, pitching through the fourth, but the real stars came out of the bullpen. Francis Cespedes, Luis Sanchez and Juan Paredes each had identical appearances of one inning, no hits, walks or runs and two strike outs.

Team White was back at it on Tuesday as Cameron Hill took the opener roll on rehab assignment from AAA. He struck out two in a perfect inning.

The other big pitcher news of the day was the perfect inning thrown by Brian Eichhorn including a two strike outs of his own. Eichhorn was the Indians 8th round pick in 2018 and has yet to pitch in an official game.

As the Major League Indians were pounding the White Sox with homers, the extended Indians were doing the same against the Brewers. Johnathan Rodriguez, Sicnarf Loopstok and Dominguez all went deep while Jonathan Lopez, Yainer Diaz and Alfonseca added doubles. Dominguez is particularly hot with two home runs in games I’ve personally witnessed and four hits in the last three games.

Morillo makes a start for the extended spring training Indians against the Reds. – Joseph Coblitz, BurningRiverBaseball

Sergio Morillo lead team Blue into action against Cincinnati on Monday and started off just where he left off last year (1.66 ERA across 43.1 innings between DSL and AZL). The righty pitched the first four innings, struck out four, walked one and allowed just one hit. While it may have been a function of the good pitching on both sides, no innings were rolled (ended before three outs) for either team in this game. This is definitely both a positive sign of pitchers not getting into lengthy innings and the team as a whole being more ready for official play in short season.

Diarlin Jimenez pitched second and was nowhere near as efficient (he threw more pitches than Morillo despite only going 2.2 innings), but was almost exactly as effective. He struck out five, walked one and allowed one hit with the Reds still scoreless when he was removed.

The Indians themselves were held to just two runs with the rehabbing Jose Medina and the mainstay Cristopher Cespedes providing the bulk of the offense. With Medina playing first base, Henderson De Oleo was shifted to third where he didn’t make any mistakes and looked vastly improved over his attempt at the position in last season’s AZL.

There is some unfortunate news this week in addition to the play on the field as Lenny Torres has undergone Tommy John surgery and will miss the rest of the year.