The Mets Are a Riderless Horse 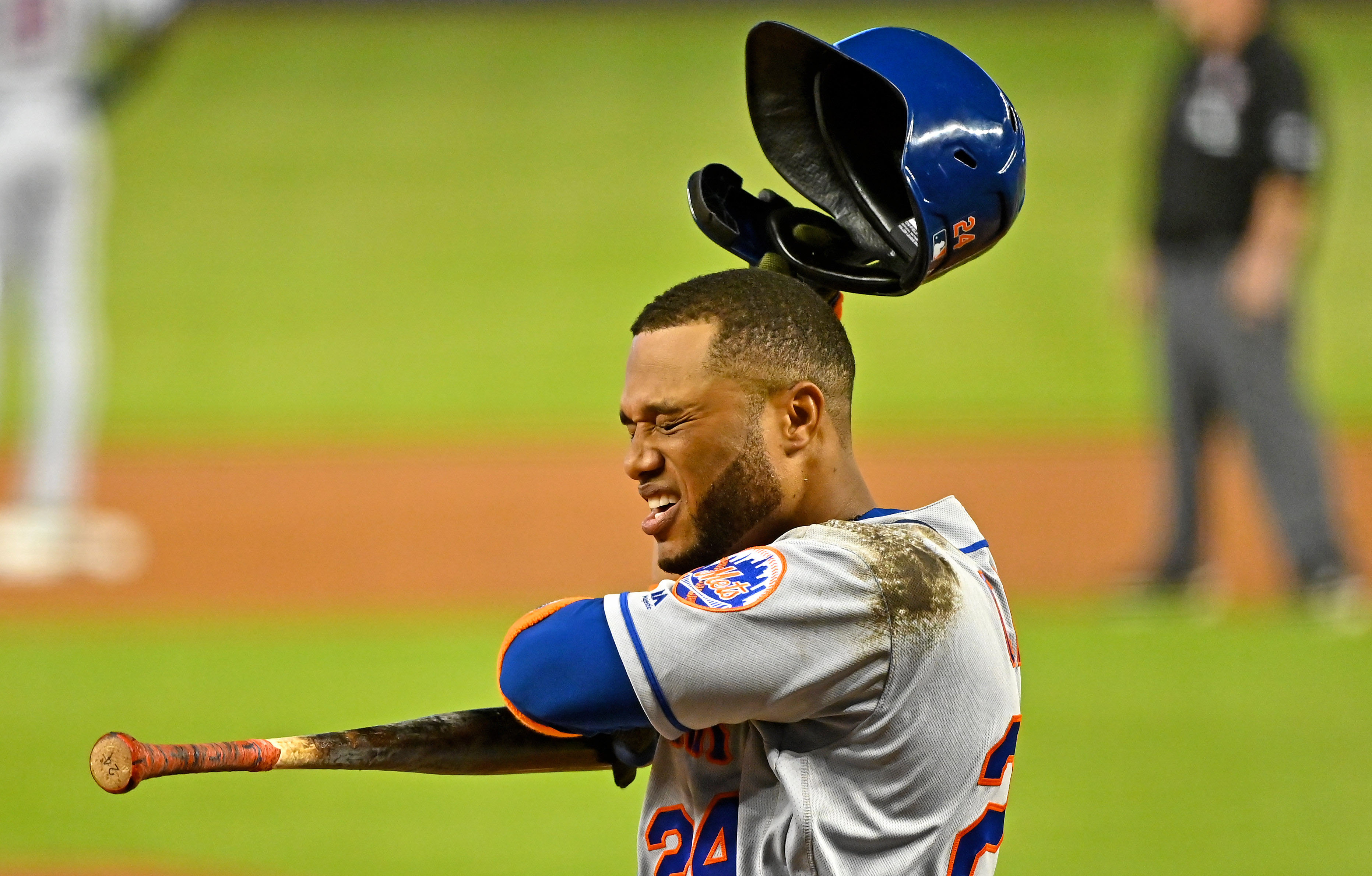 The Mets Are a Riderless Horse

In case you missed the Preakness Stakes (and with no Triple Crown winner to be had this year you probably did), a horse named Bodexpress bucked his rider at the gate and actually finished ahead of a couple of horses as he ran the race to the finish without the jockey.

At one point during the race, some sort of quality control horse tried to corral the riderless horse to make sure he didn’t interfere with the horses that still had a chance. The one problem was that the QC horse took Bodexpress, who was running on the outside and not bothering anybody, and actually steered him towards the racing pack and could have made the situation worse than it was.

May 18, 2019; Baltimore, MD, USA; Officials try to catch Bodexpress (9) after the 144th running of the Preakness Stakes after John Velazquez (not pictured) falls off at the starting gate at Pimlico Race Course. Mandatory Credit: Tommy Gilligan-USA TODAY Sports

If ever there was an apt analogy for the Mets, whether it be this season or the last 20, it’s that they’re the Bodexpress of baseball teams. They’re a riderless horse. No leadership. No direction. And when somebody tries to come in and steer the horse in a different direction, disaster is threatened. That’s the Mets.

After a 2-0 loss to the Marlins where the Mets led off the game with a hit off Pablo Lopez, (who was torched for ten runs in three innings about a week ago), and then basically got no-hit for nine straight innings, that’s sure as hell how it seems. Everybody is talking about how “ooooh, Mickey’s on the hot seat!” Unless the Mets can reanimate Gil Hodges or set up a rocking chair for Davey Johnson, is there anybody the Mets are willing to hire that can make a difference this year? They might as well go riderless and see what happens.

And let’s talk about Robinson Cano, Brodie’s big idea to try to corral the horse.  Everybody is up in arms about because he didn’t run hard to first base on a double play on Friday. Cano blamed the scoreboard being wrong and apologized to Mickey after the game. Now Mickey could have benched him and sent a message to the rest of the team, but didn’t. But even more than that is to ask why we’re so surprised that Robinson Cano didn’t hustle to first? He’s been doing this since 2005, and the rest of baseball has been doing it for basically just as long. Why are we shocked at this? We knew what we were getting and so did Brodie.

(Speaking of Hodges, Gil used to make players sit with him in the dugout and pay attention to game situations. There isn’t a manager in baseball that does that anymore. It’s not the world we live in. Baseball players don’t work two jobs in the winter to supplement their income. This isn’t a Robinson Cano issue. This is what baseball has become. It would be nice of Cano hustled on every play. But we’re in the era of saving yourself for the long haul. We need to calibrate our brains to this reality.)

But Brodie got him anyway. Remade the entire team. Got Edwin Diaz, who can’t get into a game now because the offense stinks. Got Jeurys Familia back, who has been a disaster. Got J.D. Davis, who started two straight games on the bench so that Todd Frazier can go 0-for-3 and tell fans to go f*** themselves. Got Keon Broxton … he’s gone. Got Justin Wilson to occupy a cold tub, and signed some dude to a two year $20 million contract who claimed to be Jed Lowrie, but we think he has taken the money to Grand Cayman to lay on the beach with a girl he met at the airport.

Not to mention that the off-season before, Mickey Callaway was treated to Sandy Alderson’s worst winter as Mets GM … featuring Frazier and Jason Vargas. Knowing all this, I ask you what the hell Mickey Callaway is supposed to do here? And what is changing the person in the manager’s office going to do at this point? The person in the manager’s office in today’s Major League Baseball is the equivalent of middle management in ticket sales. Replacing that person is not going to change the fortunes of a billion dollar corporation (which the Mets would like to remind you that they are.)

The last time the Mets mad a managerial change mid-season was in 2008, and that was because Willie Randolph lost the room. Jerry Manuel was promoted and the Mets went 55-38 for him the rest of the season. Considering that the rest of Manuel’s managerial career was three games over .500, and the rest of his Mets managerial career was filled with more misery than an Aaron Heilman slider, I think it’s safe to say that a riderless horse would have went 55-38 managing that team. Is a new manager going to come in and go 55-38 with the roster that Brodie has provided? Ask yourself that. Is Jim Riggleman or Luis Rojas or Tony DeFrancesco going to come in and go 55-38?

(And before you give me Joe Girardi, ask yourself are the Mets going to pay him to come in and go 55-38. If the Mets are willing to let Brodie make that hire while also paying Mickey Callaway, well then wonderful but they’ve never done that before and I don’t think they’re about to start. As for Wally Backman, we’ve been talking about him since 2009. If the Wilpons weren’t willing to hire Wally in the last ten years, they’re not about to go down that road now, and that’s despite the absence of Sandy Alderson who was seen to be Backman’s biggest critic.)

The Mets aren’t pitching well, from Jacob deGrom on down. The Mets haven’t hit well in about a month. It’s a total system failure that the general manager helped create. Fire the manager if you want. With the way front offices are set up, firing Mickey Callaway isn’t going to make any difference unless the reason you’re firing him is that he’s lost the room, because all a manager really needs to do is not lose the room. It’s not helping anything this season as long as the team can’t beat Washington and Miami anymore. It’s purely cosmetic. Forget putting lipstick on a pig. Firing Mickey Callaway is throwing concealer at a tornado.

It’s not going to give the horse any direction.