Your Morning Dump… Where we ponder the Kyrie/AD scenarios 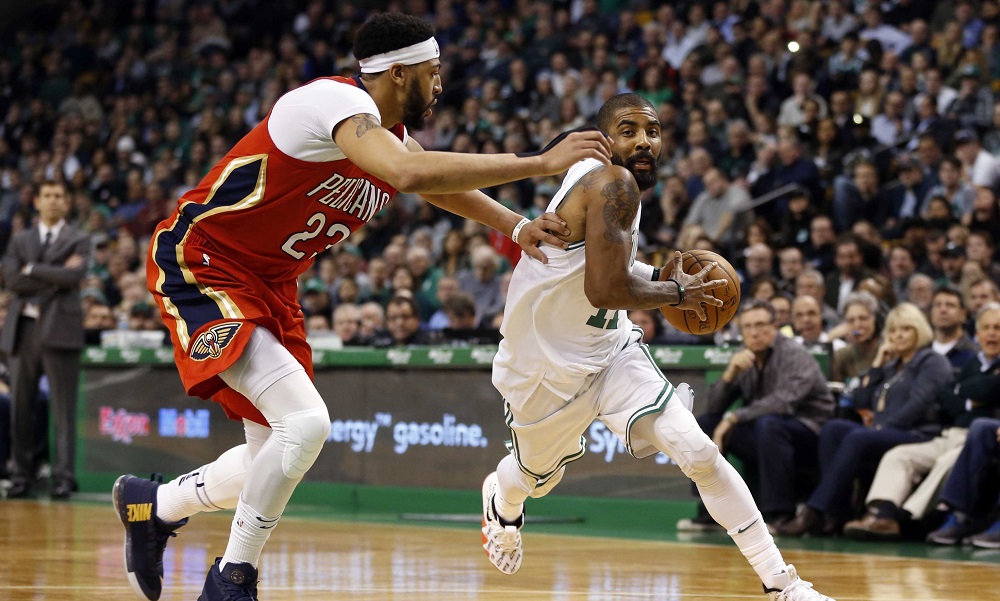 Your Morning Dump… Where we ponder the Kyrie/AD scenarios

What exactly would the Celtics’ roster look like if Irving departs?

Irving’s exit, as stressed in this space, does not open any sort of avenues to immediate cap space for the Celtics. They’d be watching an All-NBA talent depart and almost certainly without compensation (even a sign-and-trade seems unlikely if Irving desired to sign with a team with cap space). Boston would get some luxury-tax relief but, if Al Horford elected to return (either by opting in or signing a long-term extension), Boston would remain over the salary cap and would have limited avenues to add impact talent.

Still, the Celtics could essentially rally themselves around the notion of building around the 2018 playoff core — Horford, Tatum, Brown, and, yes, maybe even Terry Rozier — while hoping that a healthy Gordon Hayward and some tweaks to the complementary pieces could keep this team competitive.

NBC Sports Boston: What do Celtics do if Kyrie Irving walks?

I’m basically assuming that Boston won’t trade for Davis, or at least they won’t give up a “Godfather” offer, without knowing that Irving is staying. If he says “yes, I’m re-signing based on this deal for Davis,” then Boston will pull the trigger.

If Irving says “sorry, but I’m out of here,” then I question whether Boston will make the deal for Davis at all. They certainly could, but they’d probably want to keep one or more of the assets they’d otherwise be willing to give up.

Here we are again, talking about what will happen with Kyrie Irving and Anthony Davis. It’s hard to avoid a topic that will determine the entire future of the franchise.

Let me go on record that I want Kyrie to stay and Davis to join him. As we know from watching the Jordan Crawford Celtics, the Isaiah Thomas Celtics, and the Hospital Celtics, gritty overachievers are fun squads to root for, but in the end, talent wins out.

With Kyrie and AD, Boston would have two top-15 players, not to mention Gordon Hayward potentially returning to his top-25ish Utah form. The Celtics would be legit contenders. That was the entire objective of the rebuild, so let’s finish the job.

Will Kyrie stay? Well, the Celtics have the ability to offer him $190 million for five years – that’s one year and nearly $50 million more than any other team. He’d need a real good reason to pass that up.

In a wild twist, it seems Kyrie himself may have scared away some of his potential employers.

The most interesting bit of information from several sources that we’ve been able to consolidate and confirm is that some teams thought to have interest in Irving as a free agent are now a great deal more wary. Based on the way things played out with the Celtics this season and Irving’s role both off the court all year and on it in the playoff loss to Milwaukee, certain clubs are concerned about putting too many eggs in his basket right away.

Two teams for certain are telling people they will only go after him if they land another marquee free agent and that player says he wants Irving. In each of these cases, the initial target is different.

Herald: Celtics still want to be the ones to pay Kyrie Irving, but possibilities abound

As for Davis, what price is too high to pay? Smart? Tatum? Brown? All the draft picks? It’s complicated, and also risky to give up top young talent for a player who can leave after one year, but the reward could be a Brow-Kyrie duo that will lead the Cs for the next five years.

Danny Ainge has done this before, acquiring Kevin Garnett, so we have to trust him. Still, that’s a lot of pressure for someone who just had a heart attack, and I say that in all seriousness.

Meanwhile, Mike Zarren warns us to get ready for anything.

The Celtics’ assistant general manager talked with Adam Himmelsbach of The Boston Globe about how busy the team expects to be in these next few months.

“Given the state of our roster and the draft assets we have now and going forward, nearly any kind of transaction is in play. To trade for players around the league, to move up or down in the draft, for future picks, to use our picks,” Zarren told Himmelsbach. “We’ve got a lot of flexibility this summer, but also a lot of big decisions to make. So the next two months are going to be very, very busy.”

Some fans are saying go for it all, others want this drama to end. What do you say?

On Page 2: No Celtics, no surprise

The winners of these awards will be revealed at the 2019 NBA Awards presented by Kia on Monday, June 24 at 9 p.m. ET on TNT. The third annual NBA Awards will take place at Barker Hangar in Los Angeles.

The finalists for the six annual awards, based on voting results from a global panel of sportswriters and broadcasters, are below:

After the up-and-down season the Celtics had, no one Boston from deserved to be a finalist in any of the six categories. The one exception was Marcus Smart as a DPOY candidate, but he was passed over in favor of the bigger names.

You’re not surprised, are you? Celtics fans appreciate Smart’s tenacity, but the voters don’t, as he’s never actually been placed on the All-Defense team. That, at least, should change this year – or else we are having a conversation.

And, finally… Life comes at you fast

Who knows what’s true here? But thank you Lakers for continuing to provide comic relief during your offseason.

The Lakers have decided they will not hire a President of Basketball Operations to replace Magic Johnson, a team source told ESPN.

General manager Rob Pelinka will continue in his role, reporting directly to ownership. Pelinka had previously reported to Johnson

Thanks for this too, LA management. Keep doing the same things and expecting different results.