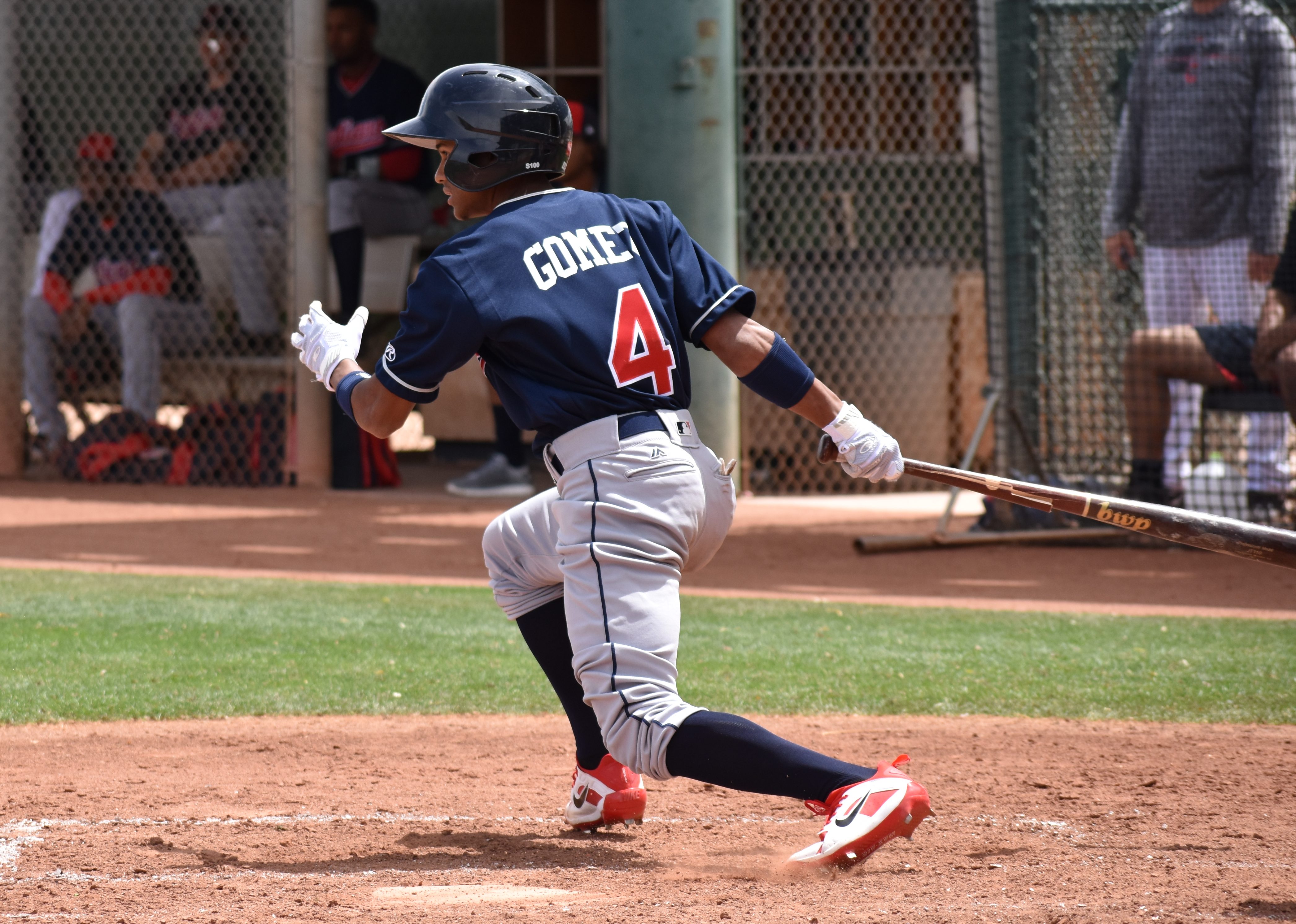 We continue our trek around the Indians minor league system with a stop at second. The top three players from last season have all remained in the top ten, but four players have shifted around the diamond and been removed. These are Brayan Rocchio (SS), Jorma Rodriguez (SS), Tyler Krieger (3B) and Jhan Rodriguez (RP!). Also removed is Todd Hankins, who left the franchise as a minor league free agent at the end of last season and went unsigned.

By Joseph Coblitz
Gomez started this year with the Indians in extended spring training and has since headed off to his home country of the Dominican Republic where he will play the rest of the year. As young as a player can get, Gomez was definitely overwhelmed in his short time in Arizona, but still showed great athleticism and flawless defense.

By Pete Conti
Schneemann is batting a measly .136 in six games played thus far for Lake County with only three hits and one run scored. He has nine strikeouts and a .208 on base percentage. Schneemann does not consistently get on base much for the Captains, but even when he does he has not seen much of home plate so far in 2019.

By Joseph Coblitz
A middle infielder out of Colombia, Palacio is extremely small, yet incredibly powerful. While this wasn’t readily apparent in his two Dominican Summer League seasons, he’s hit .417/.500/.667 in the games I’ve seen him play in extended including a home run after hitting just one home run over his first two seasons. It will be a long time until we know much for sure about Palacio, but he is expected to play a full season in the Arizona League this year and that should start shining a light on this young slugger.

By Pete Conti
Persinger is on the seven day injured list for Lynchburg with a .182 batting average in seventeen total games for the Hillcats. He has two doubles and one home run with twenty seven strikeouts along with six RBI. Persinger has a .257 on base percentage as well, and a .333 slugging percentage which is a solid number despite missing some time due to injury. Barring any setbacks, Persinger should return to second base and be a consistent run-scorer for Lynchburg.

By David Wood
Fermin is just 20 years old entering his fourth season with the Indians organization. His first two years with the Tribe were not all that noteworthy. However, last year at Mahoning Valley, Fermin had an excellent season. He batted .279 with an OBP of .391. He stole 17 bases and he walked 39 times with only 26 strikeouts. His ability to get on base really stood out last year.

So far this season he has slashed at .262/.361/.392. He has continued to walk more than strikeout with 9:8 ratio. However Fermin has missed nearly a month of action due to injury. He just returned on Saturday as a DH and is scheduled to start back at second on Sunday. Now that he has returned we will see if he can improve his slugging while maintaining his excellent on base percentage. If he can do that he will become a big time prospect for the Indians.

By Joseph Coblitz
The smallest name in the trio of middle infielders signed by the Indians in the international market in 2017 (behind Brayan Rocchio and Aaron Bracho), Tena had an incredible first season last year in the DSL. He hit for power (13 extra base hits, .410 SLG) and showed great speed (four triples, 10 steals) while playing very competent defense at both second and short. While not as flashy as Rocchio or Maestre, Tena rarely makes mistakes and has great range due to his speed. While he could ultimately play short, I believe he fits best at second with the current group headed for the 2019 AZL.

Maestre runs into the gap to field a ball during a 2019 Indians extended spring training game. – Joseph Coblitz, BurningRiverBaseball

By Joseph Coblitz
While he has had a light bat over his first two seasons with the Dominican Summer League Indians, Maestre should not be overlooked among Indians middle infielders. He had just nine extra base hits during his first 64 games, but I’ve personally seen him hit three (including two triples) in nine extended spring games against more advanced talent. Maestre greatly improved his on base ability in 2018, largely by hitting the ball with more authority, but also by improving his eye at the plate.

Everything that Maestre does screams of speed. He is a great base runner, stealing a base in 13 of his first 15 official attempts. He has great reaction time and a strong arm, allowing him to play third as well as his more normal short stop and second and the range to play the latter two positions. Maestre fits in perfectly with the Indians recent run of overall athletic middle infielders and should advance quickly within the system.

By Stacy Hannan
Mathias is getting his first taste of AAA ball this year, and is playing well for the Columbus Clippers. He started of slow at the plate to start the season, but has heated up as the season has progressed and is showing a glimpse of why the Indians chose to promote him to AAA over other promising infielders this season. Mathias is currently hitting .296/.376/.470, with three HR, nine doubles, and 15 runs scored. Importantly, Mathias is showing consistency at the plate, hitting for a better average than he did at AA while still drawing walks.

Drafted out of California Polytechnic State University in 2015, he entered the Indians’ system as an advanced college hitter, winning the Big West Conference batting title his sophomore season with a .386 average. He hit .356 in his final season at Cal Poly before the Indians selected him in the third round of the draft.

Mathias is primarily a second baseman, but has shown over the course of his minor league career the ability to play third base and even shortstop in a pinch. If he continues to mature at the plate, one must wonder if he could be in the mix to get the call from the Tribe instead of Yu Chang (who has struggled this season) if the Indians come calling for infield help. Mathias’ ability to get on base is something the Indians have struggled mightily to do this season, and could make him an attractive option if the Indians hope to stay in the playoff picture.

By Stacy Hannan
After hitting .291 to start the season with High-A Lynchburg this season, Friis was recently rewarded with a promotion to AA Akron. Unfortunately, shortly after his promotion he was side-lined with a left wrist strain. Friis was recently activated of off the injured list and will hopefully hit the ground running with the Rubberducks. For the season (including four games with Akron), the switch-hitting Friis is batting .290/.402/.406. Friis, who is not going to blow your doors off with power, has 13 walks and 13 strikeouts in 19 games this season, and makes good contact from both sides of the plate.

He has been with the Indians organization since 2017, when he was drafted out of Indiana State. In his first taste of professional ball that year, Friis hit .221/.276/.284 in 33 games with short season Mahoning Valley. The following season Friis hit .266/.356/.383 with Lake County before finishing the season with Lynchburg.

Friis’ best position is second base, but he can also play third base and shortstop. He is a bit undersized, 5’9 and 180 pounds, but if he can produce at the plate and get on base consistently, his defensive versatility could help him continue to advance through the Indians system at a swift pace.

By David Wood
Last year, Richard Palacios had an amazing first season with the Indians. He started the year in rookie ball, went to Mahoning Valley and finished the season at Lake County. He put on quite a display of hitting during that time. At all three levels combined Palacios slashed an incredible .361/.421/.538. with an OPS of .960. In 190 plate appearances he had 16 extra base hits, 19 walks and only 27 strikeouts.

Unfortunately for Palacios and the Indians he has not gotten out of the starting blocks so far this season. He was going to start the year at Lynchburg, but in late March he suffered a torn labrum injury. Shortly after that he underwent posterior labrum surgery. The recovery time on that procedure is three to four months. Palacios will miss most, if not all, of the 2019 season. Hopefully he makes a full recovery and is ready to go when he comes back. Middle infield is highly competitive area in the Indians organization. Palacios will need to return quickly. If he makes a complete recovery he has a bright future in Cleveland.