Your Morning Dump... Where we ponder Kyrie teaming up with LeBron 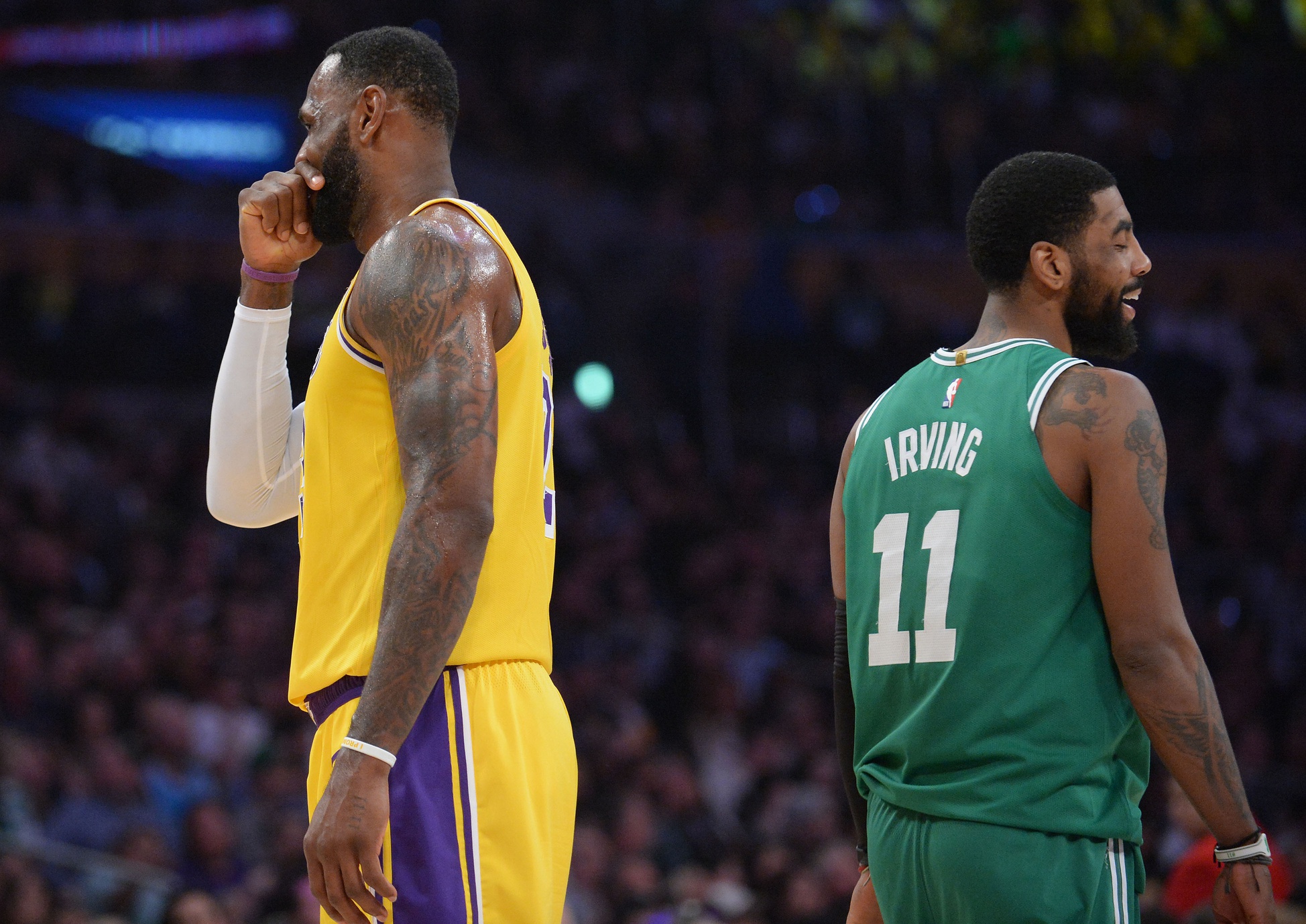 Your Morning Dump... Where we ponder Kyrie teaming up with LeBron

According to ESPN’s Brian Windhorst (video link –ed), the Los Angeles Lakers aren’t quite as high on Irving’s list as the Celtics, Brooklyn Nets and New York Knicks, but Boston shouldn’t feel particularly comfortable after the “thawing” between Irving and LeBron James led to Irving researching the Lakers’ franchise.

“That said, Magic leaving, that was a guy he felt a connection to,” Windhorst said. “And with great opportunities in Brooklyn and in New York plus Boston trying to keep him, I think the Lakers are lower on his list, but they’re on his list, and that gives them a fighting chance. Boston has got to still be worried about the Lakers in the Kyrie pursuit.”

Ok. Brian Windhorst is kind of like Rich Paul, in that he owes his current visibility to one man: LeBron James.

And that, basically, is the filter through which I run anything that comes from Windhorst: I figure that anything he says has either been given to him by LeBron, or has been vetted by LeBron before it hits the front page of the ESPN website.

Any ‘connection’ that Kyrie had with Magic probably dates back to his Cavaliers days, and whatever connection there is or was, seems likely to have been tenuous at best.

That Kyrie would backtrack on his desire to get away from LeBron ‘Norma Desmond‘ James is, in its own way, as ludicrous as the notion that a guy who dislikes distractions and craves winning would decamp for the Knicks.

Meanwhile, back in the realm of real world reportage, Steven Bulpett’s got news:

Two teams for certain are telling people they will only go after him if they land another marquee free agent and that player says he wants Irving. In each of these cases, the initial target is different. (There was worry on one of those clubs that the basketball ops people might be overruled by ownership and told to make Irving a primary aim, but that organization is now on the same page.)

I suspect that all the teams in the Kyrie sweepstakes have taken this attitude, more or less–Kyrie, after this season–especially the second round loss to Milwaukee–is not at the AD/KD/Kawhi level. I would add that I suspect both of those teams Steve cites would throw money at Kyrie after missing out on those three guys.

I also think it is extremely unlikely that it will come to that. I think Boston will lock up Irving in fairly short order, and he’s not going to be available to any other team.

The Celtics do continue to hold out hope that Irving will clear his head, realize the possibilities in Boston with a reworked roster that may even have Anthony Davis and choose to stay and fulfill the line from the Nike commercial about getting his number retired there — a line that, by the way, he wrote himself. It would be an epic journey of realization for a guy who considers himself a deep thinker.

But there is room to wonder whether Irving will ever be truly happy. Some who have been with him at other stops have told the Herald this is an ongoing concern, that it’s hard to know how he will be from day to day. And while his Celtic teammates generally had good relationships with him, there was acknowledgement that traversing his emotional spectrum — for example as he went from benevolent leader at the end of the regular season and through the Indiana series and Game 1 against the Bucks to the way his disappointment manifested itself in the four losses that followed — was an issue.

Kyrie Irving is about as cosmopolitan a person as you can come across. He was born in Australia, his grandmother was a registered member of the Lakota people living on the Standing Rock reservation, he played high school ball in Jersey, he went to basketball camps in Boston, played college ball on Tobacco Road, and spent his first few years as a pro in Cleveland.

Donning my amateur psychiatrist hat, I think Kyrie needs a measure of stability in order to thrive–I think that the whirlwind life he’s led up to know has gotten a bit old. I have no doubt that one of the reasons why he asked to be excused from the Cavs was the perpetual chaos that surrounds LeBron. I think Kyrie wants a basketball ‘home’, and if Boston seemed like that kind of a home in October, things rapidly changed once the season started. Had the season lived up to expectations, there wouldn’t have been incessant questions about whether Kyrie was going to stay in Boston, whether Kyrie should stay in Boston, and whether he was even a good influence on the rest of the team.

And support from the team during the season was tepid at best–which is as it has to be. The Celtics’ brass can’t go all-in on a pending free agent. They didn’t with Isaiah Thomas, and Kyrie’s no different.

Irving found himself beset with questions (some of them were reasonable, but a great many were not), and the team didn’t–couldn’t, really–take any steps to counter the media frenzy by saying, ‘this guy’s our PG. Period.’

For a guy who apparently likes playing basketball more than any of the trappings associated therewith (ridiculous Uncle Drew movie notwithstanding), a five year deal with an organization that is a paragon of stability may be just what the doctor ordered.

Kyrie may not be cut out for a team captain type role–but I don’t think he needs to fill that role either. It’s also worth remembering that it took Paul Pierce a while to find his footing as a team leader. The Boston media had a field day with some of the things Pierce said before Garnett and Allen arrived.

Heck. Paul Pierce was the team captain and almost 30 years old when he gave his memorable “great player on a bad team” quote.

I think it’s safe to say that we can be a bit patient with Kyrie, given how well things worked out with Pierce.

You may have heard that salaries must match in NBA trades. This is true, but there are ways around that. Teams with cap space can acquire a player without sending back actual salary in return. In this scenario, the team acquiring the player sends back what’s called a “trade exception,” essentially a credit for the other team to use to “complete” the trade at another time.

If Kyrie were to walk away from the Celtics as a free agent, it would leave the team with no cap space with which they could sign a comparable replacement player.

In such a scenario, Boston would have to do one or more of three things:

First — an explanation of what the ‘apron’ is: You probably know that the league has a salary cap, and that if you exceed the cap, you have to pay a luxury tax (and that the luxury tax can get incredibly onerous). You may not know that there’s a gap between the cap and the amount of salary that triggers the luxury tax. This “apron”, which is about $6M, exists to give teams a bit of flexibility in managing their rosters. A team that fills out its roster by signing a player to a vet’s minimum deal that bumps them $2M over the salary cap will not need to pay the luxury tax. It’s comparable to a police officer ignoring you if you’re only going four miles over the speed limit in a 70MPH zone.

However, if Boston does a ‘sign and trade’ with Kyrie–which is how the Miami Heat acquired Chris Bosh in 2010–they have the ability to create a ‘trade exception’ that will give them a greater degree of flexibility.

In such a scenario, say Kyrie Irving decides that he wants to sign with, say, the Lakers. Instead of simply signing with the Lakers, Kyrie signs a contract with Boston. Boston then immediately trades Kyrie to the Lakers.

The Lakers, significantly, do not need to send back matching salaries.

The most notable recent example of the Celtics using a trade exception came in 2014/15. The Celtics structured the Pierce/Garnett trade with the Nets in such a way that they ended up with a $13M trade exception.

They used that trade exception in 2014 to save the Cleveland Cavaliers some dough. Essentially, they picked up Tyler Zeller, Marcus Thornton and a Cavs pick for free. They didn’t send anything tangible to Cleveland, because they sent Cleveland their $13M trade exception.

Zeller, of course, was a decent role-player. Thornton and the Cavs pick, however, were turned into Isaiah Thomas.

.@magicjohnson explains in full the reason why he stepped down as the Lakers president. pic.twitter.com/oats954tDP

Magic was an incredible basketball player, but he’s approached his post-playing-career basketball endeavors with absolutely none of the dedication and singlemindedness necessary to succeed at them. There’s a reason why Jerry West has been the greatest ex-player executive in league history. The man was driven as a player, and he was equally driven as an executive.

Danny Ainge puts on a great pretense of being affable and easy-going, swapping jokes and stories with morning radio hosts, but he’s also the guy who traded Paul Pierce after that guy had spent his entire career with Boston, and who traded Isaiah Thomas not even four months after Thomas had recorded one of the most incredible playoff runs in Celtic history.

Magic has never seemed that invested in the daily grind of running a basketball team, and that–more than any ‘betrayal’ by Rob Pelinka–is the reason why his tenure will not be looked on as one of the highpoints of Laker history.

Indeed, the Lakers have missed the playoffs for six consecutive years, the longest run in their history–a run that now ties them with Boston’s run of futility in the late 90s–and the notion that they are a viable destination for any player interested in winning championships is at best absurd. They have a ton of cap room, to be sure, but they have little chance of landing Kawhi (who plays the same position as LeBron, don’t forget), less chance of landing Kyrie, no chance of landing Durant, and if they get Anthony Davis, they will have to gut their lineup to convince the Pelicans to trade him to an in-conference rival.