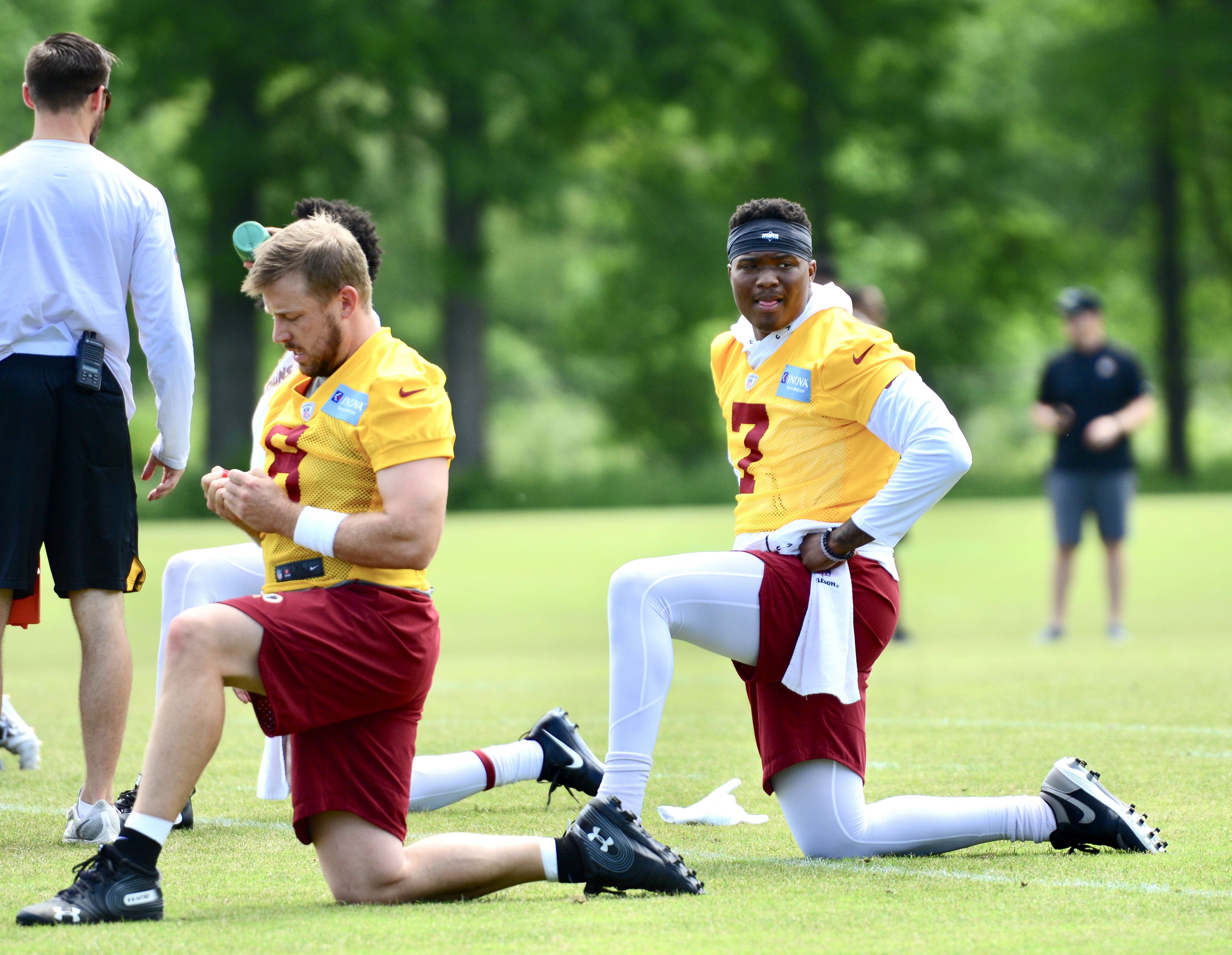 ASHBURN, Va — The Redskins opened up their first day of OTAs on Monday which meant the first opportunity to see Dwayne Haskins and Case Keenum compete for the starting quarterback job.

Keenum received the first official snap and ran with the 1s but I’d be lying if I said Haskins wasn’t slinging the ball around.

Here’s what the quarterbacks had to say about practice. 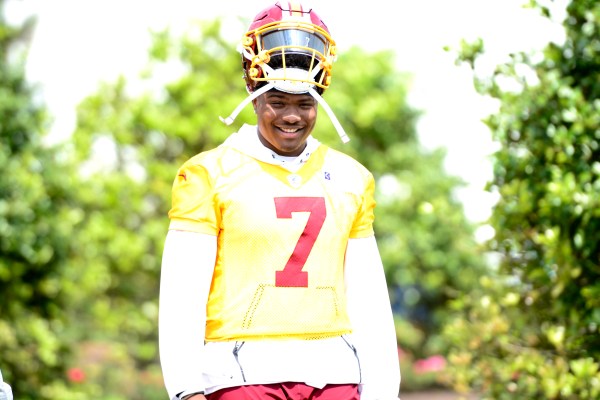 “It felt great. Football is football so I was able to go out there and throw some good passes today, learn from Case (Keenum), and have a great day.”

On if he saw the play that led to Foster leaving OTA:

On competing with QB Case Keenum:

On learning the offense:

“I feel like it’s going great. I’ve got to take baby steps since I’m still a rookie and it won’t happen overnight. I’m doing my part, studying as hard as I can and being on the field.”

“I’m most patient with terminology and regurgitating the plays in the huddle. When it comes to knowing what I’m doing I feel like I’m pretty good.”

On the pace of learning the offense:

“I know what I’m doing with my eyes in the right place. That just comes with the process of learning and doing the most when I’ve got meetings in the board room and on the field. That’s what happens.”

On walking onto the field:

“I didn’t have any expectations for today, I just wanted to execute. The biggest thing for me was going to play right in the huddle.”

“No. Football is football. I just have to do my part and everything else will take care of itself.”

“I met him at the Super Bowl. At the time he was a Bronco and I had no idea where I was going. It was cool to get to talk to guys like him in the NFL. I grew up watching people like him, and it’s great to have him, Colt McCoy, and everyone. It’s surreal for me.”

On working with Keenum:

“The biggest thing is talking ball. It’s different terminology and it’s like speaking the same language. This is what we need to be able to do… having Coach O’Connell, Coach Gruden and Coach Rattay (Quarterbacks Coach Tim Rattay) the all speak the same language and right now I don’t.  So, it’s just trying to get on the same page as them.”

On experience in the quarterback room:

“It’s great. At Ohio State we knew what was going on and to be able to have those guys (Keenum, McCoy, Alex Smith) in the room being able to pick their brain is great. I’ll make sure I use that.”

“I haven’t met Alex yet but I’m sure I’ll talk to him soon about his days as a quarterback and what he did for (Patrick) Mahomes. What he did was very instrumental for him (Mahomes) this year.”

On coming into OTAs:

“I felt better coming into this than I did going into [rookie] mini-camp as far as knowing what I’m doing. It’s an everyday process. The biggest thing is being with the rookies and rocking with the vets and throwing to guys like [Trey] Quinn, Brian Quick and all of those guys, being on the same page with them. It’s all about timing. I’m going to try my best to get my timing with them.”

“Nothing really surprised me. I was expecting a lot of work and a lot of plays. I feel like I’m a pretty fast learner and that’s just me applying myself. It’s looking good so far.”

On his level comfort throwing the football:

“When you know where your eyes are supposed to be, it makes it a lot easier being able to read safety keys and read protections. You play fast when you know what you’re doing. Like I said, it’s all in the makings of watching film, studying after hours, and playing. When I’m on my P’s and Q’s I feel pretty good about it.”

“I feel like it’s more detail oriented now as far as motions, orientations, and formations. It’s the same concepts in the basis of the playbook right now and as we get closer to the season, we’ll start planning for games. Right now, it’s just trying to get the basis.” 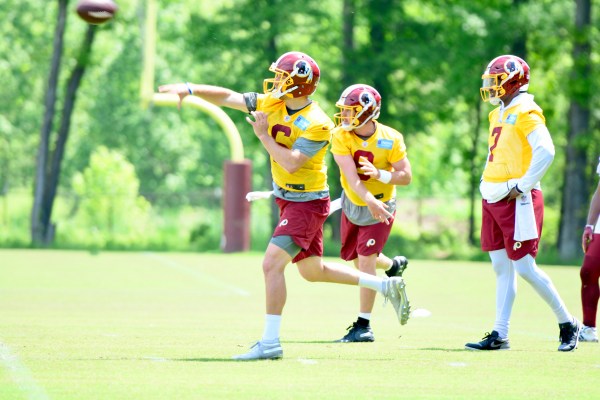 On the first day of OTA’s:

On connecting with the offense:

“Yeah, it was a good day one. Obviously, it’s not perfect. It’s not where you want to be, but I think you come off the field every day and there are things you did well and there’s things you need to do better. We’re going to go back and learn. I love the work ethic of these guys. The coaches push us and the guys play hard. It’s fun. We had a hot day out here and competing against the defense is going to make us a lot better.”

On the quarterback competition:

On how the Minnesota Vikings offense compares to this offense:

“There are some similarities, but there are a lot of differences too. I really am trying to learn this system for what it is. You know, Jay [Gruden], Kev [offensive coordinator Kevin O’Connell], Cavanaugh [senior offensive assistant Matt Cavanaugh], all those guys have a great system in place – very quarterback friendly. It’s a lot of really, really good offensive minds in that room. I’m trying to soak it up, all that I can, and apply what I’ve known in my experience and what I’ve known and done before. I’m coming at this with a fresh start.”

“I need to go back and look at the film. I think there are certain starting points and certain plays where Jay wants my eyes. I need to get better at that. Having things come second nature, some of the protection calls – little things to clean up. I think overall, there’s a lot of good stuff, but I think there’s a lot of room for improvement as well.”

“Yeah, a little bit. Obviously, it wasn’t good. It’s never good when anyone gets hurt, especially in the spring when we’re going against ourselves. We had a great talk today about protecting each other and being a team so thoughts and prayers with him. No idea what’s going on though.”

On the difference between being a starting quarterback and competing for the spot:

“I’ve always treated it the same every time. I compete with myself extremely hard. I compete with guys around me. I’m coming out here to do my best every single day and then build on that tomorrow. Learn from it, go watch the film and be better tomorrow.”