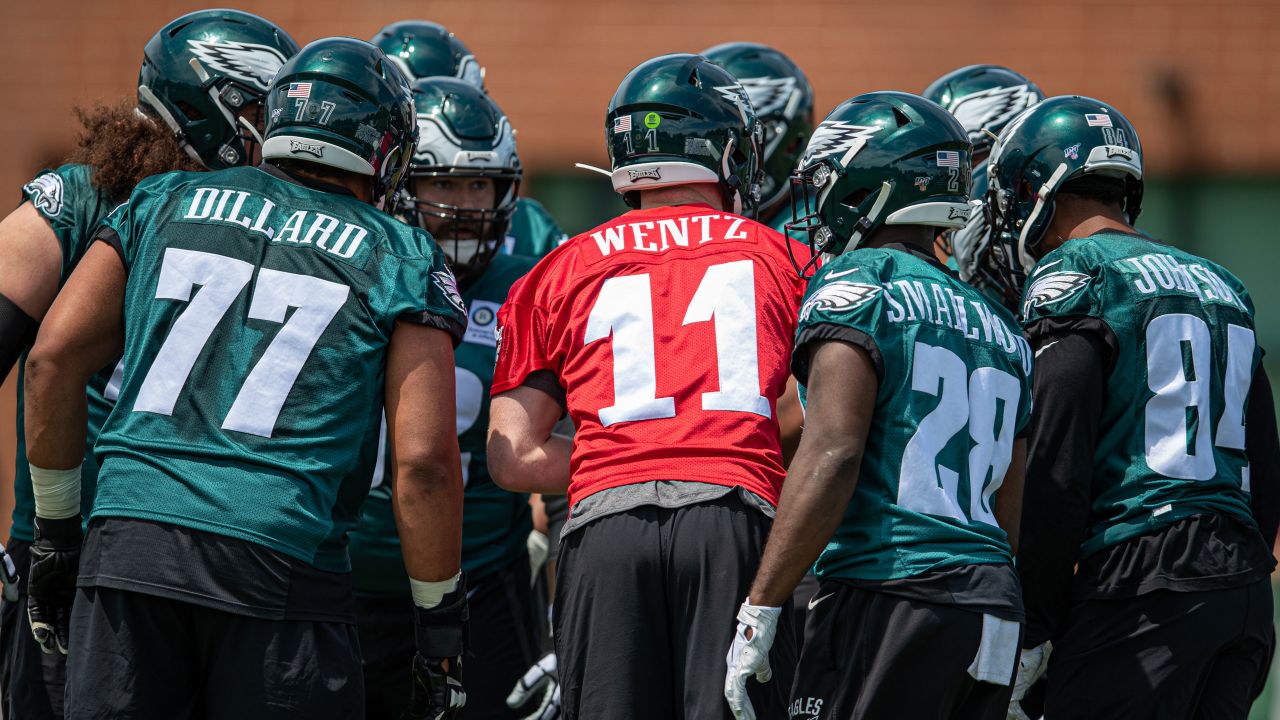 He looked good in the non-contact drills.

“And there was Wentz on a sun-splashed day with a sideline full of media members zeroed in on No. 11, studying his every dropback, his movement in and out of the pocket, the way he stepped through as he delivered passes. He played without a knee brace, he flowed with his body language, and he had great zip on his throws.” —Dave Spadaro, PE.com

Of course Spuds is paid to be positive in his observations, but EYE saw the tape of Wentz in his drills, too, and the main thing was the mobility. The range of motion was back, the wincing from discomfort was gone.

Darby, Clement and McLeod stretched with the team and then did drills on a side field. Sanders was on the field with the running backs but did not have a helmet. Derek Barnett was wearing a helmet but did not participate in team drills. The defensive end, entering Year 3, had shoulder surgery about seven months ago. No reason to push him now.

• Without Jeffery at practice, the starting receivers were DeSean Jackson, Nelson Agholor and Charles Johnson from the AAF. Johnson played for the Orlando Apollos in the short-lived league but is not some developmental player. He’s 30.

• We saw Zach Ertz and Dallas Goedert both get time with the ones. They ran some 12 personnel.

• The secondary featured Sidney Jones and Rasul Douglas as outside corners and Avonte Maddox in the slot. Tre Sullivan and Andrew Sendejo were the first-team safeties. (A lot of players missing from that equation.) Cre’Von LeBlanc was the second-team nickel corner.

• The linebackers in nickel were Kamu Grugier-Hill and Nate Gerry to start. Might have been more interesting to see what things would have looked like with Zach Brown at practice. The second-team linebackers to start were Worrilow and Fort.

Dave Zangaro of NBC.com had this to say about the QB situation after observing two workouts:

“It’s going to be hard for Cody Kessler to win the backup job as the fourth quarterback. That was a big takeaway from this week. First, Doug Pederson said these practices are a great chance for Nate Sudfeld to solidify the second-string job and then Kessler was working behind rookie fifth-rounder Clayton Thorson. To make matters worse for Kessler, Thorson looks pretty damn good. Just two days in, but he looks the part.”