How the Raptors are Guarding a Modern Shaq (The Giannis Special) 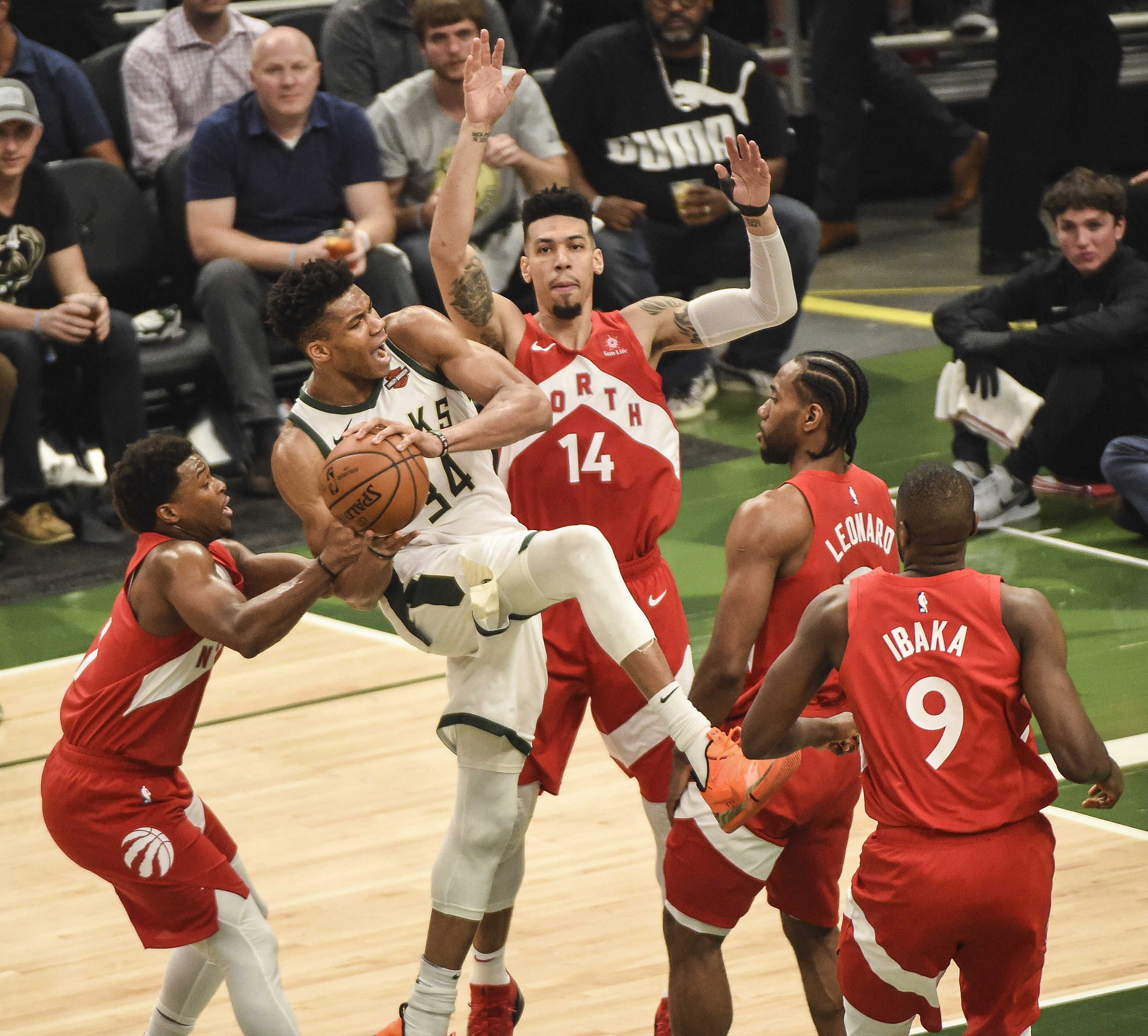 How the Raptors are Guarding a Modern Shaq (The Giannis Special)

The Raptors are currently up 3-2 on the Milwaukee Bucks. A huge part of their success leading up to their third win in a row has been their stellar defense on Giannis Antetokounmpo. Now, in no way, shape or form am I trying to suggest that this Giannis can’t figure it out, because he might. However, as of this particular moment (5/24/2019), the Raptors are holding Giannis to 23.0 PPG and 45.6% from the field. Those aren’t horrible numbers. But those aren’t the same numbers by a player who averaged 28.4 PPG on 53.4% from the field against the Celtics. Giannis is the league MVP: I am not even going to bother questioning that. There is one force that has been containing the league’s MVP, and that is the Raptors’ defense.

Giannis is the modern Shaq. Shaquille O’Neal gave up his cape to Giannis Antetokounmpo. Giannis has been compared to many greats: Lebron James comes to mind. Yet I would say he is the Shaq of this era of basketball. What people can remember about Shaquille O’Neal is his sheer dominance at the rim due to his athleticism and physique. Giannis is the Shaq of this era because he too dominates due to his stature, length and strength. He can ball handle and has the makings of a proto-jumper but really, Giannis’ go to move is driving to the rim and finishing with his athleticism. Giannis is the most athletic superstar the league has had since the ascent of Derrick Rose. That much can be said without question.

The Raptors are holding Giannis to lower totals in most statistical categories. He went for 12 points and 8 turnovers in Game 3. This is the product of tremendous team defense. The Raptors are uniquely positioned to guard Giannis. They have athletic defenders in Leonard and Siakam who can bother Giannis with their own length and athleticism. They traded for Marc Gasol who was the best STATISTICAL defender on Joel Embiid, and has the strength to bother Giannis. The defenders on the Raptors have the physical make up to bother Giannis. No one defender can stop Giannis, but a combination of team defense can slow him down.

Giannis like Shaq, doesn’t have a strong jumper. He is shooting 31.7% from 3PT range and a horrific 56.6% on his free throws. Giannis’ jumper hasn’t yet developed to the point where defenses seriously start guarding him on the perimeter. He is forced to drive in and kick if his jumper isn’t falling, because he isn’t able  to finish over two or three Toronto defenders. Despite his length, any combo of Ibaka, Siakam and Gasol helping Kawhi on defense makes it difficult for him to finish. The Raptors are exploiting Giannis’ key deficiency: against the Raptors he has looked like Ben Simmons with his fear of shooting. 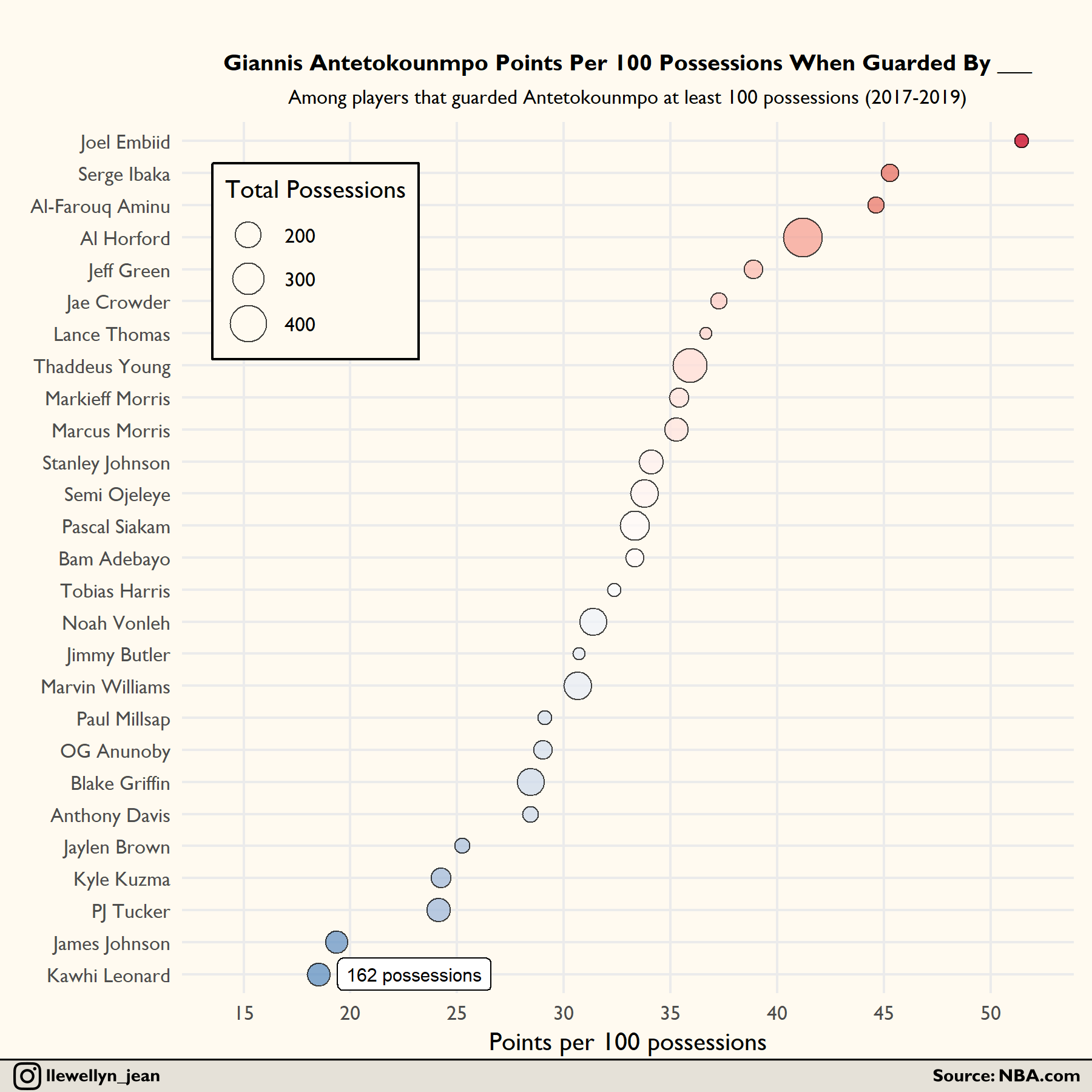 The person that makes it possible for the Raptor to guard Giannis the way they do is their superstar, Kawhi Leonard. Kawhi Leonard when going 100%, plays DPOY level defense. Leonard is too strong too let Giannis bully him in the paint. He also has the length and defensive ability to exploit Giannis’ still developing ball handling. As a bigger player, it is sometimes hard for Giannis to control the ball well on his way to the basket. Kawhi and the Raptors are built to exploit that. Essentially, in this current roster, Masai Ujiri has assembled a team that can guard absolutely anyone. Their offense may not be there sometimes: but they have a fighting chance against any team because of their defense.

Kawhi Leonard has made it possible for the Raptors to contain Giannis with a combination of team defense and guarding him on a physical level. The Raptors weren’t afraid to foul Giannis either, and even players like FVV and Norman Powell checked Giannis on certain posessions. There is a certain defensive astuteness that the team has currently, after getting rid of multiple players who were black holes on defense. Giannis is still the most dominant player in the league: however the Raptors have found a way to exploit his weaknesses and punish his teammates for their lack of production. Brogdon was the only positive of Game 5. If the Raptors continue playing solid defense and the Bucks don’t make adjustments, we all know what’s next.