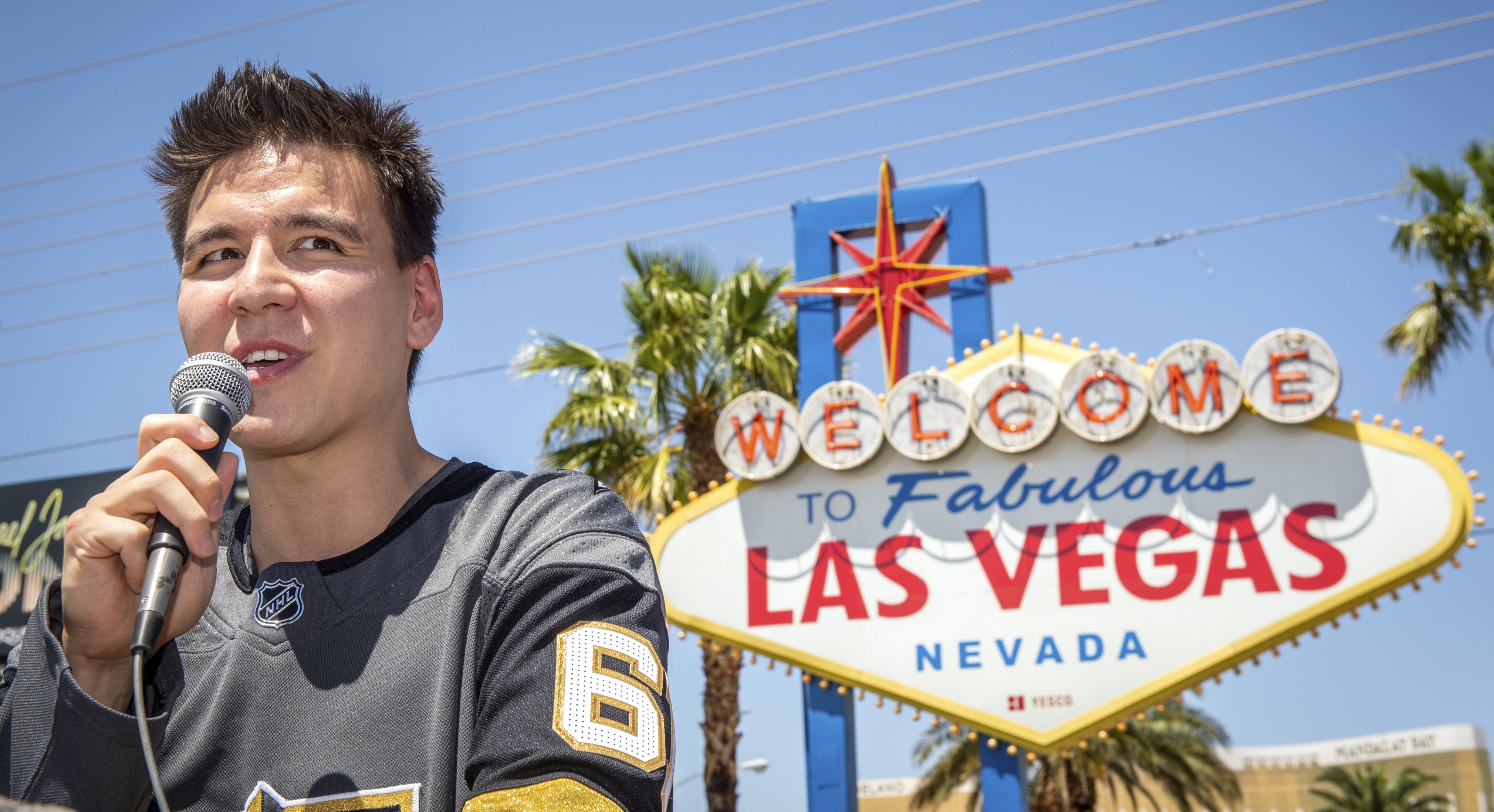 The most riveting prime-time TV these days is not sports. Instead, it is the nightly sight of an unassuming 34-year old from Las Vegas napalming Jeopardy! James Holzhauer has won 27 straight games and earned over $2-million in winnings as of last Friday’s episode and continues his inexorable Crosby-like march up the record books.

While Holzhauer steamrolls his opponents and continues to put his name all over the Jeopardy! Hall of Fame, some have called him a “menace”, comparing his application of analytics and logic on the game show to the emotionless data revolution that has rapidly changed major league baseball.

Yet Holzhauer is not a passive “cyborg” but a knowledgeable sports fan with an unmatched acumen for math and calculating risk vs. benefit. Consequently, he has carefully monetized his lifelong love of sports into a career as a professional sports bettor and now, a Jeopardy! legend.

The Pensblog reached out to “Jeopardy! James” via email and he kindly took time out of his Memorial Day weekend to answer questions on a variety of hockey topics including sports betting, analytics, player data tracking, Marc-Andre Fleury, and of course, his pick for the Stanley Cup Final.

The Pensblog: Would you consider your fan interest in hockey and the NHL in Las Vegas on the same level or greater than what it was when you grew up in Illinois? Were you an avid Blackhawks fan as a child during their run to the Stanley Cup Final against the Penguins in 1992 or did your enthusiasm take off more recently with the birth of the Golden Knights in 2017?

HOLZHAUER: We didn’t have cable growing up and then-owner Bill Wirtz didn’t put Blackhawks games on local TV, so I could only follow the team by radio or newspaper, with little idea of what hockey actually looks like. I became much more engaged when Bill’s son Rocky took over and made the team TV-friendly. I was hooked on the Golden Knights the moment they came into existence, but I admit I was skeptical about the team’s local popularity given how the Coyotes have struggled in a similar market. I couldn’t have been more wrong.

Can I get traded to the Knights as a PTBNL in the Stone deal? https://t.co/jHOHWod8CS

The Pensblog: Three and a half weeks ago when you received the honorary Key to the Las Vegas Strip, you wore a Mark Stone jersey. Internally, the Vegas front office surely has metrics estimating how much a win should cost in salary dollars. Presumably, by extending his contract just eleven days after trading for him, Vegas is confident that Stone will yield more value in wins over the next eight years than their $76-million “bet”. Do you think Vegas management made a prudent value-for-money signing?

HOLZHAUER: Fun story about the Key ceremony: A European couple (in line to take pictures at the Welcome to Las Vegas sign) googled my jersey to figure out who I was, and concluded that I’m Mark Stone. Hockey has a tricky economy because stars rarely change teams in free agency, so trading for and signing a top player can seem like an overpay when it really isn’t. You see a similar system with NFL quarterbacks.

The Pensblog: You mentioned to The Athletic last week that hockey is a sport that has been slow to incorporate new data. In your opinion, why is this still the case especially when there are incredibly smart people producing so much free analytic information in the public domain showing, for example, the predictive power of expected-goal models and their correlation with real goal scoring?

HOLZHAUER: I don’t have any contacts in NHL front offices, so I’m not sure how much they are actually working with new data, but there are some clues: teams still pull their goalies much later than the math says they should, for example. Hockey is a much more complicated sport to analyze mathematically than baseball, so it’s no surprise that they haven’t adapted as quickly.

Note: The concept of pulling the goalie earlier that Holzhauer is referring to, is summarized in this article and this article.

The Pensblog: Related to the above question, does it surprise you that in a salary cap-constrained league like the NHL, some teams still bind themselves into terrible long-term contracts, clearly having neglected essential data such as shot-based metrics or aging curves?

HOLZHAUER: Every sport has bad contracts, but we generally see fewer of them now. I don’t think this is specific to hockey.

The Pensblog: When it comes to betting on hockey, you said to the New York Times last month that “you can find some inefficiencies in team totals [how many goals will be scored in a game] and the puck line [betting that a team will win by a certain margin].” With new legalized gambling partnerships between the NHL and betting companies, do you predict that the demand for, and availability of advanced hockey stats will quickly erode some of the inefficiencies?

HOLZHAUER: I’m not sure whether these partnerships will affect betting opportunities, but I can tell you that the sportsbooks who advertise at T-Mobile Arena are the same ones who kick out winning hockey bettors.

The Pensblog: Goal-scoring in hockey is a rare in-game event relative to the total number of shot attempts taken by a team. There is certainly a lot of randomness involved in any NHL game. A puck can deflect off multiple sticks, a skate or a post and somehow find its way into the net. The maddeningly subjective results of goaltender-interference video reviews also add another layer of randomness. Have you ever looked back at your bets on hockey and found that a significant number of outcomes were affected by such “random” events?

HOLZHAUER: Hockey is definitely a sport with a lot of randomness, but most of it can be mathematically modeled. I don’t waste time philosophizing about why I won or lost individual bets unless I can learn something from it.

HOLZHAUER: I don’t think bets are inherently more risky in hockey, but you might be more likely to feel that you lost due to luck rather than skill. No fan of the sport should be surprised by this.

The Pensblog: Speaking of randomness, were you surprised when all four division winners failed to win the first round of the playoffs, especially Tampa who, at 2/1 odds to win the Cup, suffered the most colossal defeat of all? Did you yourself, or someone you know, make a throwaway bet on Columbus?

HOLZHAUER: There is so much randomness in a hockey playoff series that no upset is terribly surprising, although the Blue Jackets outscoring the Lightning by 11 goals is as crazy as it gets. I do have a friend who bet on CBJ, but not a sweep.

The Pensblog: I hate to bring up Game 7, but as a Pittsburgh writer, I need to ask about the Vegas fan-base’s perception of goalie Marc-Andre Fleury. That game displayed another factor unforeseeable by bettors – officiating decisions. The referees made a disastrous call that handed San Jose the major penalty. At the worst possible time, Fleury was unable to make key stops and well … you know the rest.

Did fans change their opinion of Fleury based on the way the series ended or were they more sober-minded, remembering the far greater sample size – his two solid regular seasons and his phenomenal play in last year’s playoffs?

HOLZHAUER: All the fans I know blame the refs, not Fleury, for the Game 7 debacle. It was obviously a terrible call, but a major penalty is only worth a fraction of a goal in expectation, so the penalty kill team could have done better. I think Flower has earned enough goodwill to let him off the hook for that one.

The Pensblog: There has been a lot of speculation floated by media that pro sports teams might offer you an analyst position. You mentioned that you applied to some teams when you graduated college but found that clubs did not pay a living wage. (Sadly, this is still the case with many teams, especially MLB where they miraculously believe the prestige of working inside baseball will put food on the table). With the advent of legalized sports gambling, have you ever considered working for the “other side”, i.e. a sports gambling company, using your models and insight to make betting lines more efficient?

HOLZHAUER: Working for a sportsbook would mean a pay cut and less flexible hours. (So would working for an NHL front office, but at least it would be fun!) I think I can safely rule that out for now.

If there’s no room for me on the VGK analytics team, maybe I can have a career as a counterculture icon. https://t.co/XkTuH0nBp7

The Pensblog: Are you excited about the new player tracking equipment (that was piloted in two Knights’ games at T-Mobile Arena in January) that is supposed to exponentially increase the amount and accuracy of real-time data gleaned from NHL games?

Do you think this type of data will also expand the menu of prop bets (e.g. which skater will have the highest speed in a season / which player scores the most goals from > 20 feet from the net) or will this type of data serve more as useful supplementary knowledge that will lead bettors to make more informed roster decisions in their fantasy leagues (e.g. understanding why certain players have overperformed or underperformed based on new data like skating speed, shot velocity, positioning on the ice)?

HOLZHAUER: I would hate to be the book manager who has to settle disputes on those sorts of bets. For that reason I think they are not likely to be offered for wagering. I do think front offices and fantasy players can make great use of this information to evaluate players, and I wonder if there is an application to in-game strategy as well; perhaps we’ll soon see the hockey equivalent of the ubiquitous infield shift.

The Pensblog: Finally, who is your pick to win the Stanley Cup Final?

HOLZHAUER: The Blues certainly would be the better story, and I’m rooting for the gambler who bet $400 on them to win $100,000 in January, but the Bruins are the superior team.