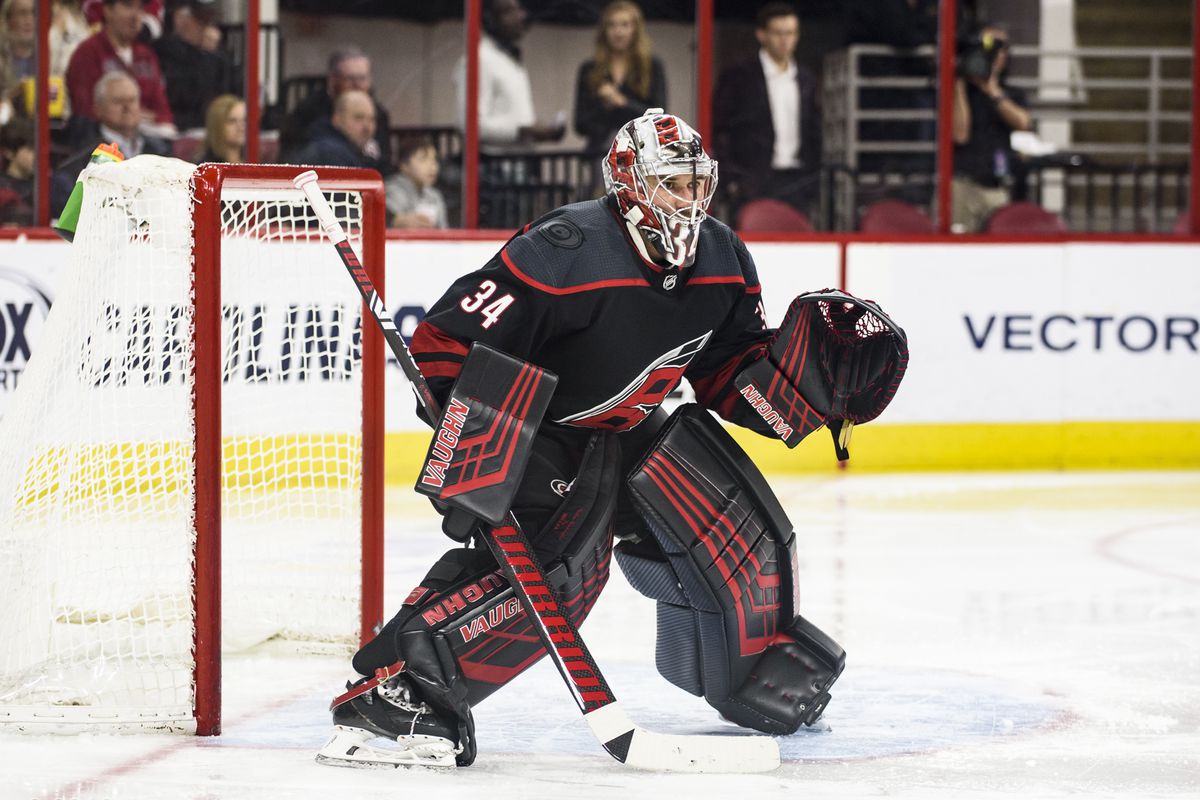 It’s a story as old as time in sports: A new manager and/or coach comes in and wants to bring in his or her own people. It’s not just with assistants or with scouts or front office people, it also includes players. Ken Holland is no different, and will be bringing in his own people slowly over the course of the summer.

One of those people very well could be goalie Petr Mrazek, who was once seen as the goalie of the future in Detroit. Holland has already admitted that he will looking to add another goaltender this summer, and has specifically mentioned the free agent market as the preferred area of procurement.

As fate would have it, Mrazek is hitting the free agent market after a season that saw him reestablish himself as a bonafide NHL’er.

Mrazek was part of a class of free agent goaltenders last July that took ‘prove-it’ contracts with a team. After a rocky ending in Detroit and a tough stretch in Philadelphia, Mrazek was looking at reestablishing himself in the league as Carolina’s backup. That plan quickly fell apart when Scott Darling once again struggled for the Canes.

Mrazek ended up playing 40 games for Carolina and had his best season since 2015-16 in Detroit. It wasn’t elite by any means, but Mrazek was solid for a Carolina team that has been desperately seeking solid goaltending for years.

One could argue that he, along with running mate Curtis McElhinney, were the key cogs in Carolina’s return to the postseason this spring. He’s due for a raise on his $1,500,000 AAV from the one-year deal he signed last July, and that might be too much for a budget team like Carolina that has other contracts to get done.

No one will argue the fact that Mrazek has insane talent. He’s proven, from the junior ranks all the way through to the NHL, that he is capable of stealing games and playing at an elite level when he is on his game. The problem? He simply isn’t able to play at that level nearly enough.

His entire professional career has been marred with consistency issues, and he’s almost always failed to get through an entire season before seeing the wheels come off. Even this year, Mrazek was absolutely pitiful in the Eastern Conference Final against the Boston Bruins.

Not only is consistency an issue, but Mrazek’s floor is really low. No one is going to be perfect, but when Mrazek isn’t on his game things can get ugly. Look no further than his .891 save percentage in Philadelphia in 2017-18 and his .901 mark in Detroit during the 2016-17 season. That’s just not good enough.

He was much better this past season, going 23-14-3 with a .914 save percentage and a 2.39 GAA. Unfortunately, that season has been more the exception than the norm for Mrazek.

Mrazek, to me, is best suited to be a backup goalie in the NHL. I don’t think he has proven that he can be a workhorse, and I just think there is too much risk involved there. At best, I could see him being a 1A/1B type goalie like he was in Carolina.

In Edmonton, he’d add more uncertainty to the position alongside Mikko Koskinen. In theory, the two up-and-down goalies could form a solid 1A/1B duo, but there is a lot of risk there.

This one is tough. I think Mrazek’s season indicates that he’s earned a raise on his $1,500,000 salary from a season ago, but how much? Does two years at $2,750,000 seem reasonable? Considering Mrazek’s career to this point and his most recent season, I think that’s a pretty fair number.

Mrazek very well could be the goaltender that the Oilers add this summer. He won’t cost too much, fits the 1A/1B mold that the club is looking for, and has a history with Holland. Depending on which Mrazek you get, it could be a very solid signing. The problem is, however, there is simply too much risk involved for my liking.

This would certainly be considered rolling the dice, but it worked out for the Hurricanes this past season.