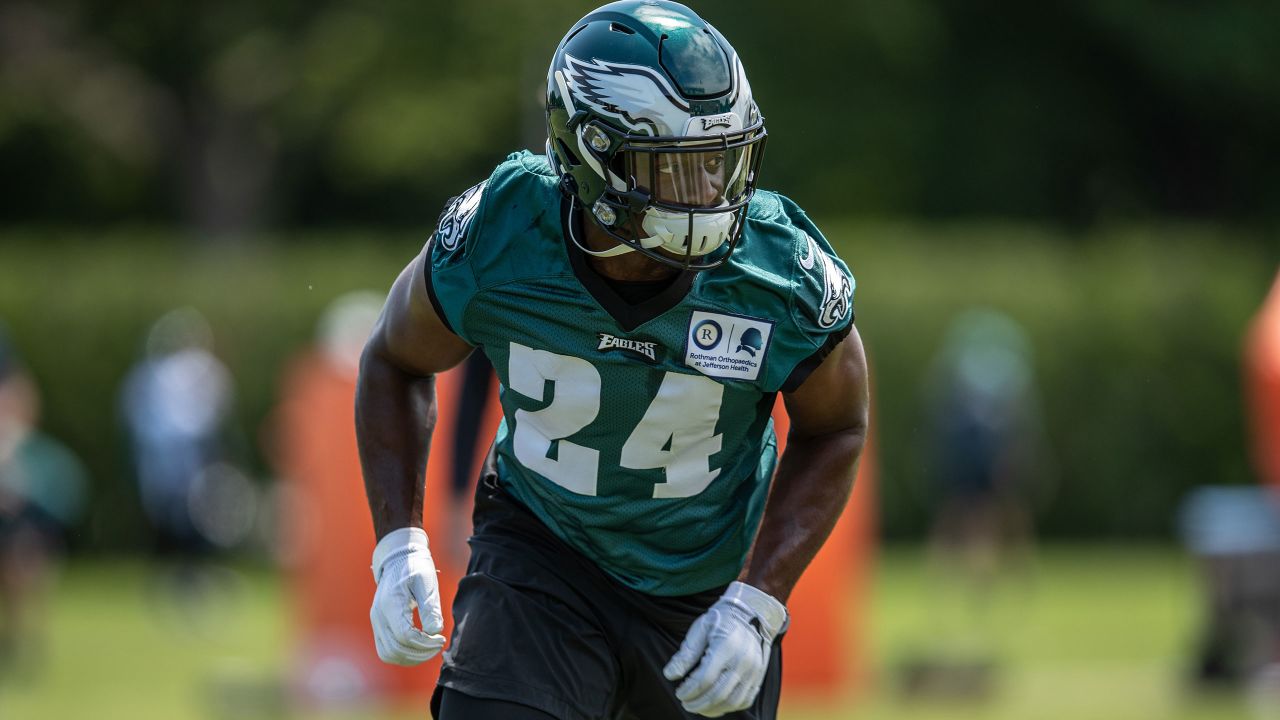 Jordan Howard is not known for his pass-catching abilities. However, Eagles’ coaches are saying that’s about to change.

“We had three practices against the defense and he’s caught the ball when we’ve thrown it to him, so that’s what I’m going to go right now, his production with us,” said Eagles offensive coordinator Mike Groh. “I think he’s worked hard at it and doesn’t fight the ball, and we just have to keep throwing him balls.

“I think he’s done a good job in catching the ball on the screens and running back check-throughs and check-downs and those kinds of things. It looks like he has worked really hard at it, and he’s catching the ball well.”

Howard will also be coached by former Eagles running back Duce Staley, who knows a thing or two about being a successful pass-catching back in the NFL. Staley was an underrated pass catcher for the Eagles, having 57 catches for 432 yards in his second season in the league and having a three year stretch from 2000 to 2002 where he had 139 catches for 1,368 yards and three touchdowns in just 34 games (9.8 yards per catch).

Of course you realize the first time Howard bobbles a screen pass for a drop, Staley will look away and mutter “I didn’t teach him that!”

What else can we drag up here?

Darren Sproles originally played to make a retirement decision in May, but the Philadelphia Eagles running back may have other plans to return in 2019. ESPN’s Adam Schefter was on 97.5 The Fanatic Wednesday, revealing Sproles is considering pushing off retirement in hopes of playing a 15th NFL season.

“I think he wants to play,” Schefter said. “I think it’s the kind of thing (where) he’s out in California and I think he’d like to go back and play for one of the teams he’s played for in the past, whether that’s the Eagles, the New Orleans Saints, or the Los Angeles Chargers. He wants to be in a competitive, winning situation.

“He’s not in a rush, he’s done this enough to know exactly what he needs to do to be ready. I think at the appropriate time when a team comes calling, he will certainly be willing to listen to what they have to say. Right now, it’s not like ‘well I got to be at OTAs in Philadelphia or OTAs in New Orleans,’ that’s not what he wants to do. What i think he wants to do is sit back, wait and see if anybody wants him and if someone wants him at the appropriate time, I think he’ll be enticed to wind up playing.”

Doug Pederson is talking like he wants Sproles back. EYE don’t know if that’s strategic honesty or simply a case of political correctness. Suffice it to say, if Doug really wants him back, it’s because if Sproles returns, the Eagles would have filled a void at punt returner along with an extra receiver in the running back rotation.

You’ve probably heard by now, but the homecoming of DeSean Jackson has been a big hit among teammates at OTAs.

“D-Jack makes the quarterback’s job easy,” said Pro Bowl tight end Zach Ertz, reacquainted with Jackson after playing with him in the 2013 season. “He’s a special, special player. We haven’t had a player like him since he left six years ago. I couldn’t tell you how excited I am to have him back. I couldn’t tell you how much he’s changed too in the past six years, just his approach to the game. He’s such a good player. He can do anything he wants at the receiver position. There’s no route he can’t run, no play you don’t want to get him involved in. Defenses just have to know where he is every play or it’s going to be a 70-yard touchdown. He just makes everyone else’s job so much easier. I couldn’t be more thrilled to have him back.

“He’s so complementary to my game. I’m the guy that’s living between the numbers and he’s the guy that’s taking the top off the defense. I feel like we complement each other really well. The safeties, they cannot focus on me every snap like they typically do. If they do, DeSean’s going to take a 75-yard touchdown pass. He’s not a guy that needs the ball each and every play. He’s a guy that the defense has to respect each and every play. If you don’t respect DeSean, he’s going to go off for 200 yards on three catches.”

Remember those complimentary words the first time Peanut gets an unsportsmanlike foul for complaining a non-call on PI. Or he dogs it on a decoy route. That’s the thing with DJax— you are definitely dealing with a mixed bag of talent and attitude.