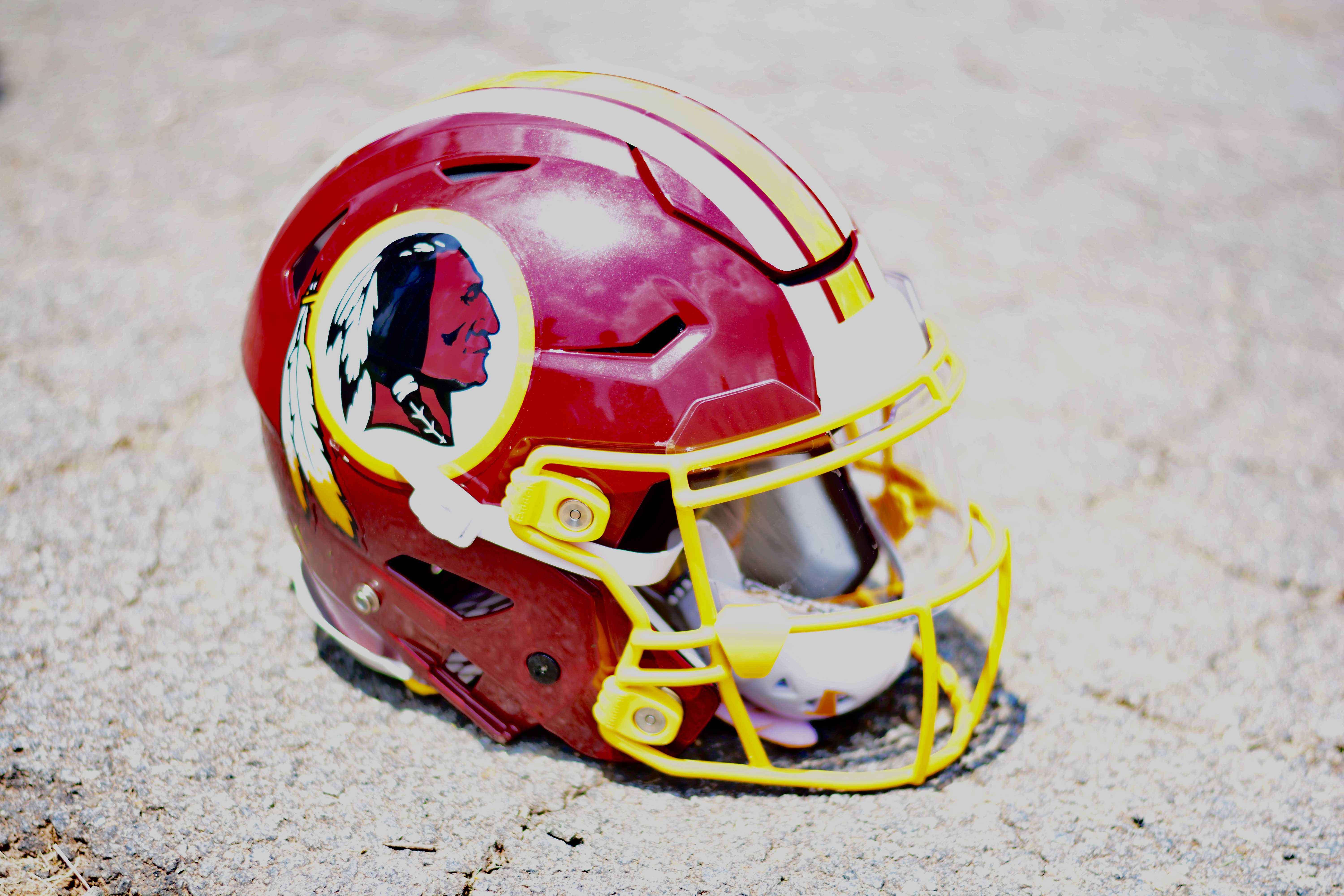 “Yeah, he’s a fun guy to watch. He’s always around the ball, excellent ball skills, that’s what drew us to him and he’s proven to be quite the athlete. He’s picked up the system very well. He’s playing inside and outside. I’ve been very impressed with him.” 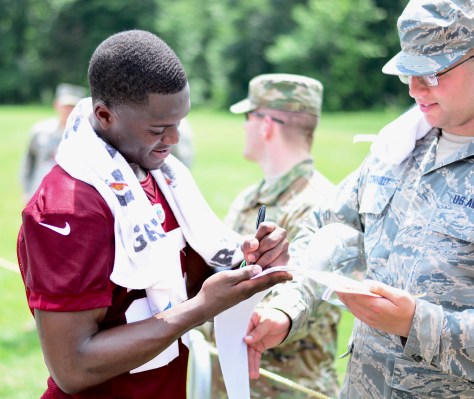 “He got one the first day. We shut them out the next couple of days. He has made his presence felt, without a doubt. He has a great idea of route concepts and breaking on the ball, obviously the ball skills. When the balls in the air, certain guys can bat them down, but not necessarily catch it. He has some great ball skills and can catch it. When you see him run it with the ball in his hands, there’s a chance he could be a good punter returner too by the way he runs with the ball in space.”

On how he determines the reps for the quarterbacks:

“Yeah it’s a 16-play period. We will probably go seven, seven and two, something like that. Try to split them up equally.” 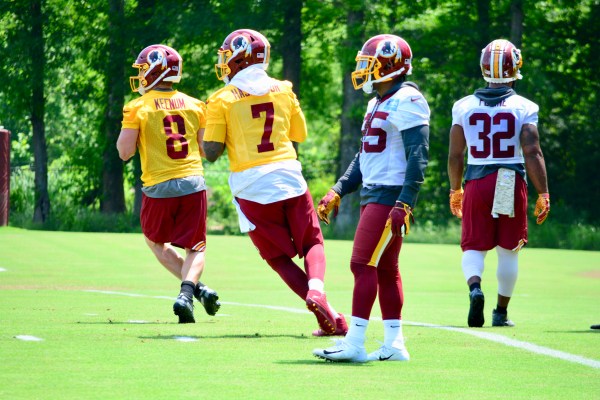 On his impressions of the quarterbacks:

“The defense is pretty good right now, they’re at full strength. Offensively, we are not quite at full strength. Our offensive line group just added two new tackles today, so it’s been a struggle. Coach Rauscher (Assistant Offensive Line, Phil Rauscher) and Coach Callahan (Assistant Head Coach/Offensive Line, Bill Callahan) are trying to get these guys up to speed, but when your blocking [Ryan] Kerrigan, [Montez] Sweat and some of these other guys coming off the edge, it’s going to be a little bit cloudy in the team period. For seven-on-seven, that drill we are getting a good feel for route concepts and making good throws. When we get into team periods, it is kind of been a little tough, defense is doing very well. I think they are just progressing nicely, both of them, all three of them, really. Josh [Woodrum] is doing some good things too. Just have to keep at it, keeping throwing things at them. Coach Manusky (Defensive Coordinator, Greg Manusky), Coach Horton (Defensive Backs Coach, Ray Horton) and these guys are doing a great job defensively of giving us looks. Challenging them and they are making plays.”

“Right now, [Ereck] Flowers just played tackle because we don’t have any. We have some obviously that just got here. Timon [Parris] has been here a little bit, but he is coming back from an injury. He’s [Flowers] playing some tackle right now. We are just putting him out there. He will still be our swing tackle. We envision moving him back [guard] once we get Morgan [Moses] back, Trent [Williams] back, Geron Christian Sr. back. Right now we are very light. It is good for him. Keep his mind fresh with tackle, but we will get him plenty of reps at guard as well.” 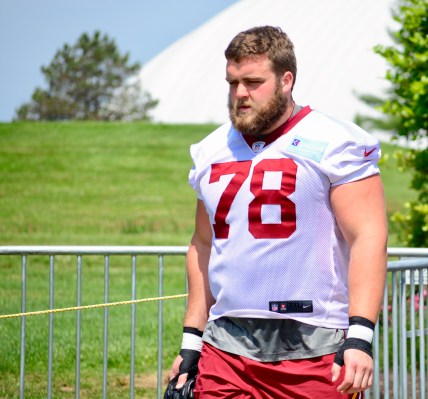 “Yeah, both feeling their way, I think Brailford has shown excellent athletic ability, quickness off the edge. He plays with good length, but again, we’re shuffling tackles in and out of here, so we expect them to have some success but I’ve been impressed with Jordan. His athletic ability, his mental ability to pick up the defense up;[he’s doing a good job. Then Wes, you know the same thing. We’re trying to teach him the fundamentals. It’s at the early stages, but for offensive linemen, you know it’s not easy. We’re doing inside-zone, outside-zone, mid-zone, some double teams, pass blocking, pass protections; we’re throwing a lot at them. I think mentally he’s a very, very bright guy. I just think he has to continue to work on his fundamentals and he’ll be fine. I like where he’s at.”

“Yeah, this week, we’re still very cautious with his shoulder coming back from the shoulder. But, he feels good. We’re trying to get him in some seven-on-seven drills. I want to get him lined up when we have walk through so we can communicate the defense, get lined up and then. At his own discretion with the trainers, he’ll do some team periods every now and then just to make sure he’s careful. He understands his importance to this football team. It’s fun to look at him over there instead of playing against him with the NY Giants all the time. He’s a good guy to have out there. He’s a communicator. It’s hard to tell how his presence is felt in shorts, but when the pads are on that’s when you feel Landon.” 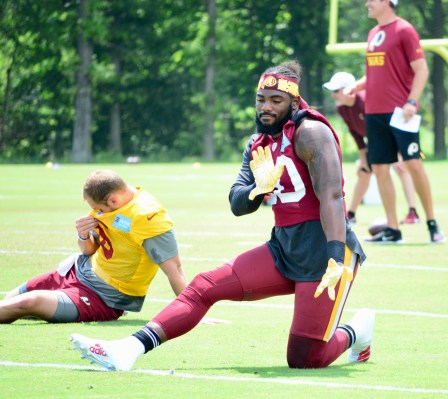 “He’s a veteran guy that can run. He’s played with Landon before, and you know he’s a smart guy. He communicates. He can play man-to-man. He can play off. Just another security blanket to have out there that gets you some leadership with some depth. When you have a guy that’s six-foot-two that can run like he can, with the experience that he has, the plays that he’s made in big games in his career, I mean, what the heck? It’s a great add for us.”

“Well, we had concerns that maybe football wasn’t very important to him but when we had a chance to meet with him in the offseason, he was passionate about his return and wanted to play and that’s all we had to hear. I can imagine why he’d want to quit from the Raiders, right? (Laughter) [Head Coach Jon Gruden] will do that to people. No, I’m just kidding. That’s not a headline. You know I think sometimes as a veteran guy, if you’re not getting the reps, the work you think you should get, sometimes you’ve had enough. You know, then you sit out sometimes and you’re like ‘wait, I still can play. I still can help a football team,’ and that football team shows interest, you can maybe get them back to speed and get them ready to play.”

“I think a couple times we just might’ve just told him the formation wrong, or the run to the wrong side or what have you. Dwayne’s still processing everything, so everything’s coming in fast and he’s trying to process the formation, the run concept or the pass concept, protection. So, it’s all really new to him as far as transferring what I say or what Coach [Kevin] O’Connell says to the huddle. There might be one key word that he might mess up, which is a critical word – 14 instead of 15 – so it’s a big word. So, we have to just clean him up a little bit, slow him down, be patient, but it will come for him. It’ll come soon.” 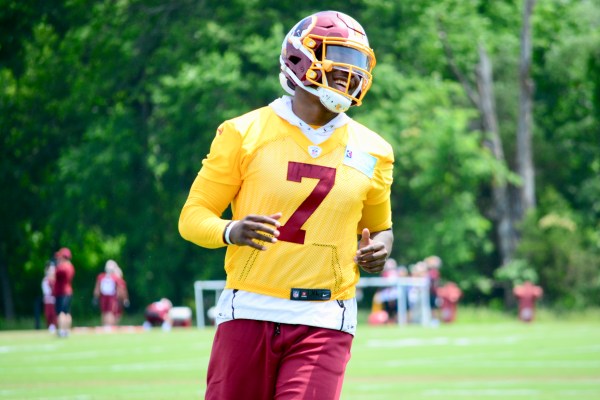 “Yeah, I’ve been impressed with Josh. Really, he’s come out. He’s come to work every day. He’s been in all the meetings. He’s running. I think when the ball’s in the air he’s been making plays left and right. I’m Josh’s biggest supporter up here and I’m really, really hopeful that he comes through in a big way this year. It’s a big year for him, we all know contractually, but for this football team for us to have success we need his input. We need his production. I think this is going to be a big year for him. If he has the year that I think he should have, then our offense should really take the next step.”

On if he wants the Washington Redskins featured on HBO’s Hard Knocks:

“Well, it’s not up to me. If we’re forced to do it, then obviously we’ll have to make it work. You know, it’s a process that can be distracting at times, but, really they do an excellent job as far as keeping out of your business. So, it wouldn’t be the end of the world. I think our guys would probably have fun with it at the end of the day. Initially, it’d be a distraction so to speak but I think really, if they were smart I think they’d go to Oakland. (Laughter) I mean, seriously, what an entertainment value that would be – Antonio Brown, Jon Gruden, [Defensive Coordinator] Paul Guenther, Vontaze Burfict, [Richie] Incognito – I mean, you guys have got to be crazy not to go to Oakland. They can do us next year maybe. [Reporter: ‘not if you make the playoffs’] Well, if we don’t make the playoffs I probably won’t be here anyways. (Laughter) They can come here and do it all they want.”

“You know, I take pride in doing the work in the offseason, both free agency and in the draft. Sometimes you’re right and sometimes you’re not so right, but with Matt it was an easy decision for us. He was right there in the fifth round (2016 NFL Draft)) for us, and the way he played at Temple, it’s just carried over. It was an easy pick.”

On the wide receivers being an unsettled unit:

“Yeah, you could say that, but I think based on what I’ve seen out here it’s the most exciting group to me. Really, I think the rookies have come in here, not just the draft picks but some of the free agents, WR Steven Sims has come in and shown flashes. WR T.J. [Rahming]’s done a good job. WR Cam Sims coming off the injury has proven that’s why we’ve kept him around and he’s going to make our team because of his size and athletic ability and Josh Doctson like I mentioned I think is going to have a big year. WR Trey Quinn has taken over the inside slot role. He’s confident, he’s quick, he’s got strong hands, he’s physical, [and] he’s tough. Obviously WR Brian Quick with some veteran experience. Obviously WR Paul Richardson’s not even out here yet with his speed. But, WR Terry [McLaurin] and WR Kelvin [Harmon] are – knocking on wood right now – are very good.” 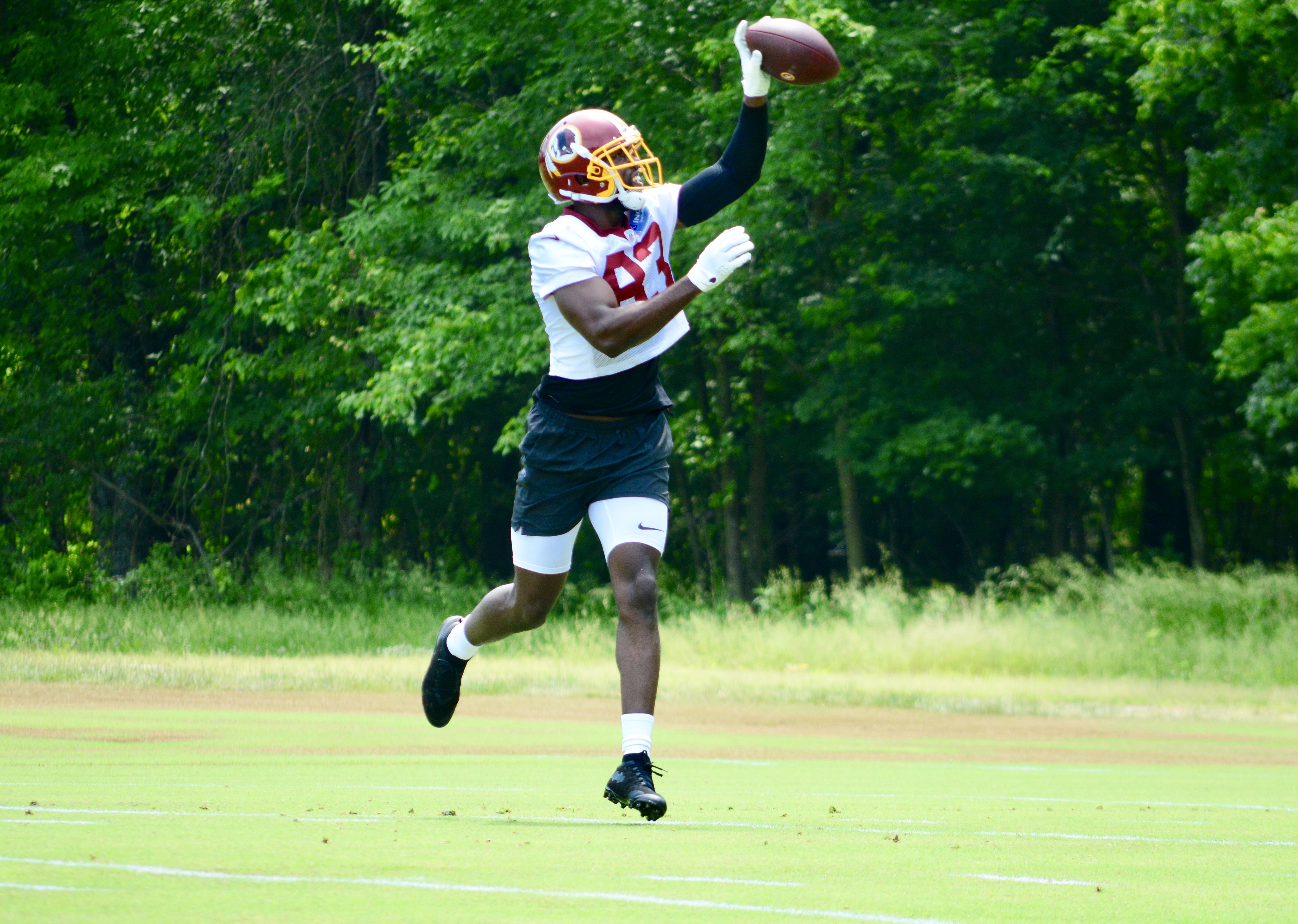 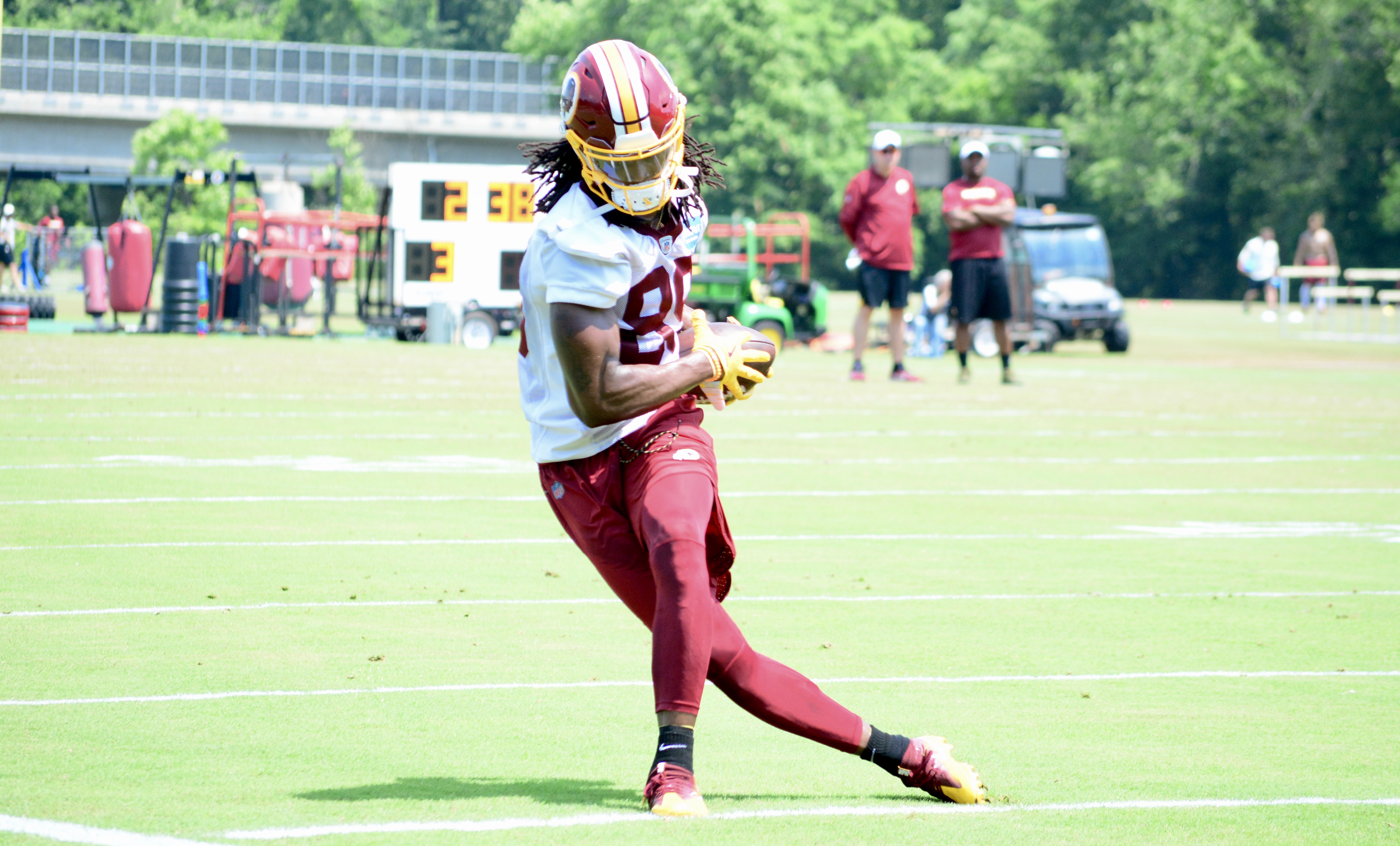 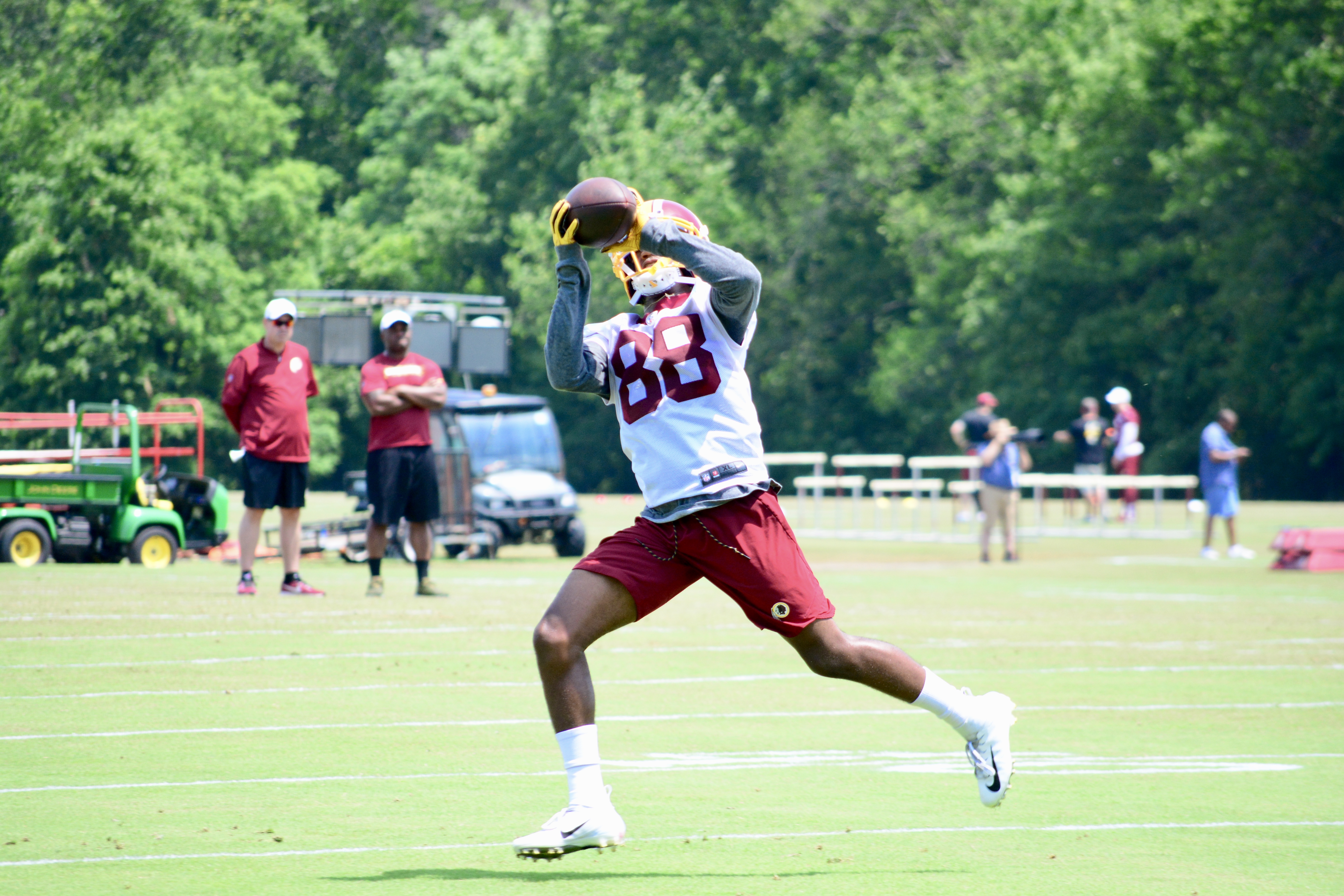 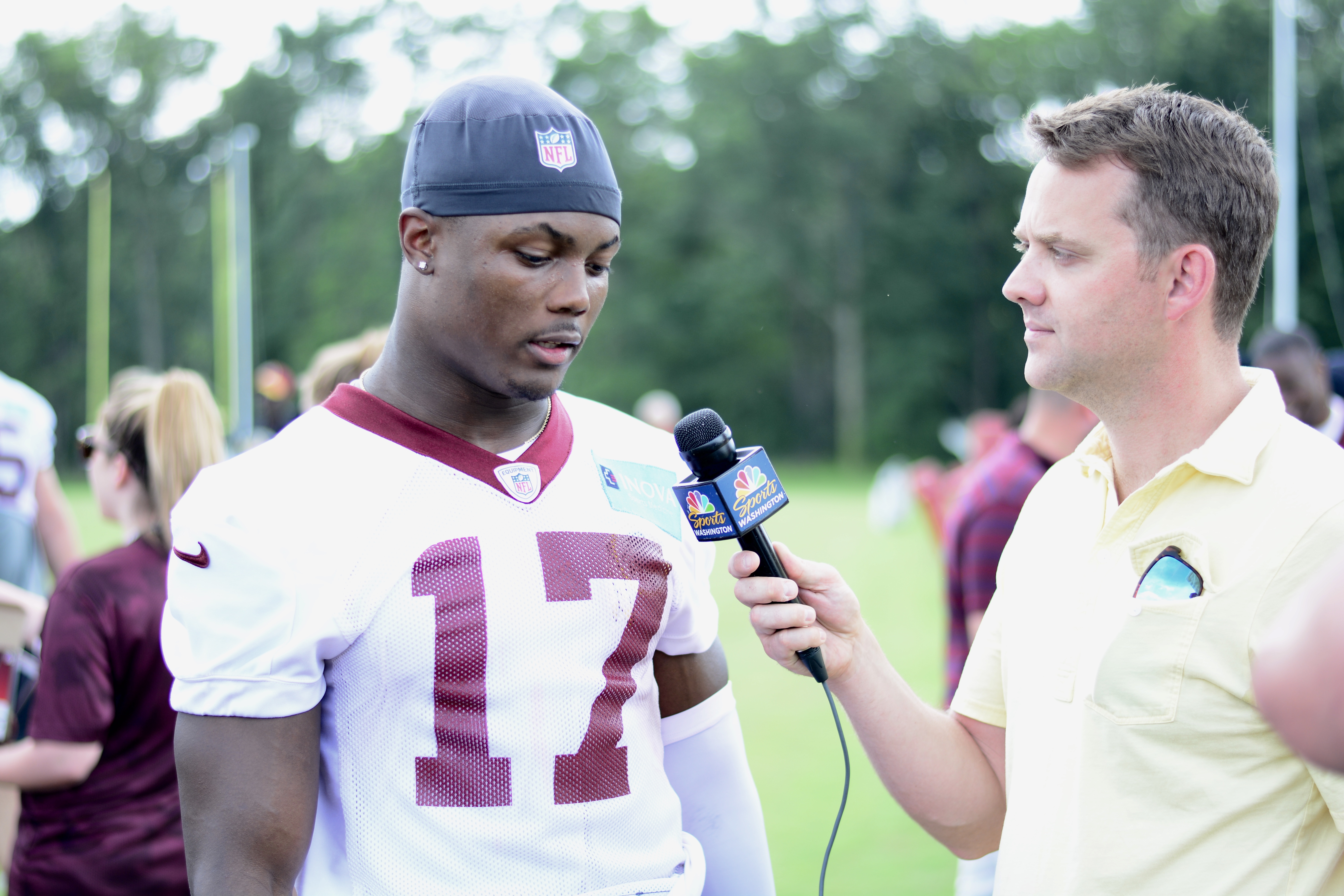 On the arm pad he uses to practice:

“I might have to put the arm pad to bed, yeah. (Laughter) I might have an issue, I can’t stand there. I have to be actively involved someway, somehow. The arm pad’s probably a bad idea, yeah. I’ll stick to clapping my hands.” 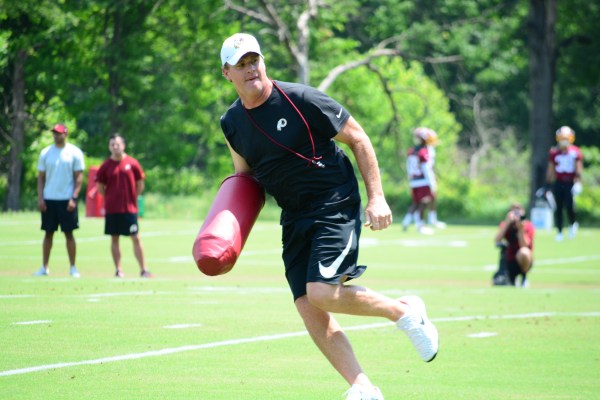