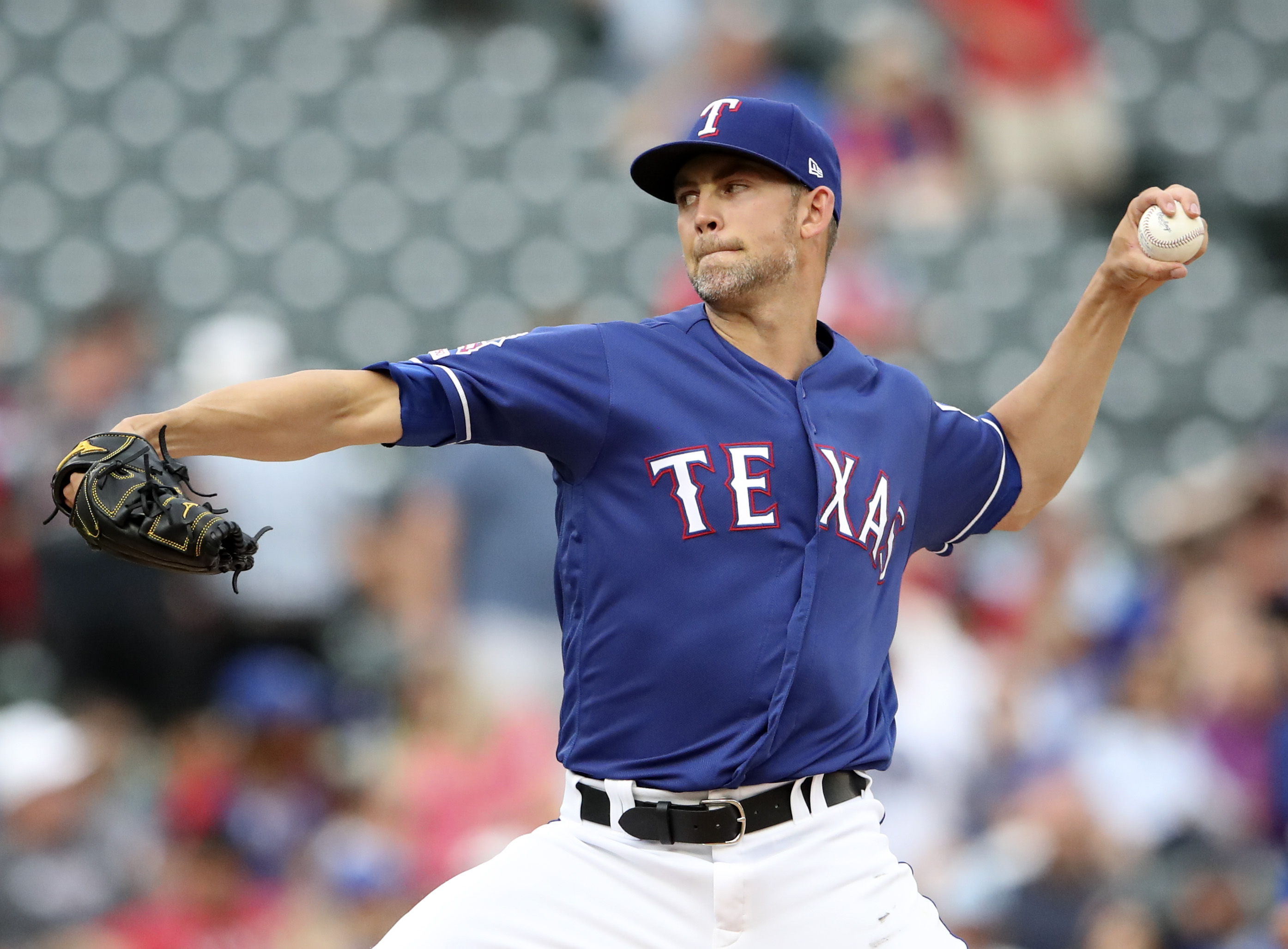 The Braves starting staff enters play Friday 12th in ERA, 16th in FIP, and 19th in fWAR. With the bullpen struggles, the rotation hasn’t received nearly the focus when improvements are suggested, but should that change? Should the Braves consider upgrades to their rotation and if they do, who stands out? And why did I already answer that last question with the title of the this column? Because of clicks.

We’ll get back to a certain southpaw in a second, but let’s look at the rotation as it stands right now. Led by the young dynamic duo of Mike Soroka and Max Fried, the rotation’s current rankings compared to the rest of the majors are fairly impressive considering the struggles Mike Foltynewicz has had this season. Expected to be the team’s ace, Foltynewicz struggled to find his fastball until May 19’s start against the Brewers. It’s no surprise then that he’s allowed just two earned runs in his last dozen innings with 10 K’s and no walks. Having one of your best pitches humming seems like a good thing.

Should that continue – and everyone in Braves country is crossing their fingers that it does – the return of Foltynewicz as a trustworthy arm turns the dynamic duo into a tremendous trio. Of course, neither Fried nor Soroka have ever been a full-season starter in the majors before. The Braves may look to limit their innings either by skipping them when possible or trying to heavily regulate their pitches per game.

That’s where the veterans Julio Teheran and Kevin Gausman step in and, well, it’s a bit of a hodgepodge when it comes to them. Teheran has been terrific at first glance with a 3.53 ERA over a team-leading 66.1 innings. But Teheran doesn’t seem to truly inspire a good deal of confidence. When Teheran was an All-Star caliber arm, he had one of the best strikeout-to-walk rates in the bigs. Over the last three years, even though his strikeouts are rising, his K/BB rate has declined. Every advanced metric suggests Teheran is due for a massive regression – from his above-average hard-hit rate surrendered to his (at least, theoretically) low BABIP that is unsustainable.

But Teheran has been this guy going on nearly two years. After a terrible first half in 2017, Teheran finished the second half with his ERA nearly as close to 4 as it was close to 5 over the first few months of the season. At the time, we chalked it up to a pitcher learning how to deal with the new ballpark in Cobb County. Since then, however, we have seen more of the same Teheran rather than the one before the move to SunTrust. He walks “too many batters,” gives up “too many homers,” is too “unreliable” and yet, through it all, his ERA is never “that bad.” Sure, he’s no ace. But he’s weirdly consistent despite seemingly fighting himself nearly every game.

Meanwhile, Gausman is more up-and-down. Game Score isn’t the best stat in the world, but for Gausman, it’s a funny look into how you never really know what you’re going to get. I added red to the scores above 55, blue to the ones below 45.

With Gausman, you almost never know if he’s going to be really good or terrible on any given day and typically, he’s one or the other. It’s why Orioles fans were so frustrated with him. Even the advanced metrics see a bipolar act. His ERA is 5.56, his FIP is 3.67, and his xFIP is 4.44. He’s both unlucky and lucky at the same time due to a low LOB% driving up his ERA while a lower-than-normal HR/9 is driving down his FIP.

I’ve compared Gausman to the young versions of Odalis Perez and Jason Marquis that came through Atlanta. Amazing stuff, potential to be lights out each time out, but you always prepared for the bad version to show up.

To me, either pitcher could be replaced, but I would move Gausman before Teheran because there might be a way to get more value out of Gausman as a reliever. Gausman has never really had a dependable third pitch in the majors. At no point has his slider or changeup ever graded well in term of pitch value. He makes do on a decent fastball and a really good, though not always reliable, splitter. Perhaps a move to the pen could help? For whatever it’s worth, hitters facing Gausman the first time through the order when he starts have a .312 wOBA. It goes up to .341 the second time through the order and stablizes to .327 the third time. That drop is likely due to Good Gausman earning a chance to pitch deeper into the game whereas Bad Gausman’s already been removed before the third time through the order. Let Gausman do what Sean Newcomb has done as an attacking reliever and perhaps the Braves will benefit?

As one little aside, having Gausman in the pen also gives you a capable option to move to the rotation when you do want to skip Soroka or Fried to manage their innings better.

But who replaces Gausman in the rotation? I wrote about Madison Bumgarner recently and came away not that impressed. Sure, Bumgarner is a better bet than Gausman, but I want an obvious improvement, not a moderate one. And since the Braves love reuniting with former Braves, why not try to get Mike Minor from the Rangers?

Yeah, that Mike Minor. After injuries helped cut short his time with the Braves, Minor resurfaced as a reliever for the Royals in 2017 and was dynamic in his new role. But what he wanted was a starting gig and left Kansas City in free agency to sign a three-year deal with the Rangers. Last year was a disappointment in some regards, but kind of lost after his terrible start was a guy who got stronger as the year progressed. He shaved almost two runs off his ERA when you compare his second half with the first half. He became harder to hit, his strikeouts went up noticeably, and he started to look like the Minor of old. All this despite playing in Arlington, Texas during the summer while shouldering a full-season load as a starter for the first time in four years.

This season, Minor has been on another level. Sure, he’s a bit lucky and his ERA is due some regression, but he’s also been very good with a 2.74 ERA, 3.44 FIP, and 2.1 fWAR. His changeup has always been a plus pitch, but it’s been damn near unhittable (.182 average against, .216 slugging against). The pitch is among league-leaders when it comes to horizontal break, getting about four more inches of break versus the average. He combines the 86 mph changeup with a fastball that has a ridiculous spin rate and a bit more sinking action than the average. Even his slider is getting more movement this year along with a curveball that drops off a cliff.

Minor has all the attributes you want at first glance for a guy the Braves would be wise to trade for. He has four capable pitches to go to, has shown the ability to pitch through the order three times with no extreme dropoff in quality throughout his career, and did I mention he’s team-controlled for another season? Due the remainder of his $9.5 million salary this year and a full $9.5 million next year, Minor is a relative bargain provided his pitching is sustainable and very little about his performance so far suggests he won’t continue to be a solid arm moving forward this year and next.

Not for nothing, but it wouldn’t be the worst thing to have a second left-handed arm to start when facing the Bryce Harper-led Phillies, the Anthony Rizzo-led Cubs, or the Max Muncy/Cody Bellinger/Joc Pederson-led Dodgers.

There are, of course, a few issues that should be pointed out in all fairness. Minor missed a few starts last season and his 157 innings during 2018 is the most innings he has pitched in the last five years not including this season. That lack of durability shouldn’t be completely ignored. Further, if the Braves are looking for a battle-tested arm who has “been there” before, Minor really isn’t it. He did start a game in the 2013 NLDS, out-pitching Zack Greinke and leading the Braves to their only victory of the series over the Dodgers. But let’s be honest – that’s not MadBum level and Minor has no other postseason experience

Finally, while it seems hard to believe, the Rangers enter play today at .500. While they trail the Astros by 8.5 games, they are only a game out of the Wild Card. Their offense has been shockingly good. Why is that such a shock? The Rangers are second in the AL in runs scored largely because of Shin-Soo Choo, Hunter Pence, Logan Forsythe, and Danny Santana. Remember, the year is 2019.

The longer the Rangers stay “in it,” the less likely they become to trade off Minor. But if there is dropoff from that veteran core of guys you didn’t know still play in the majors, Jon Daniels has to consider dealing Minor while his value might be at its highest.

That makes him a bit more expensive, but perhaps the right fit for the Atlanta Braves. No, this shouldn’t be the only thing they do. Yes, they should absolutely add bullpen depth. But this is not an either/or proposition. Upgrade the rotation, upgrade the bullpen, and let’s see what this team can do. Bring Mike Minor back home and reap the benefits.