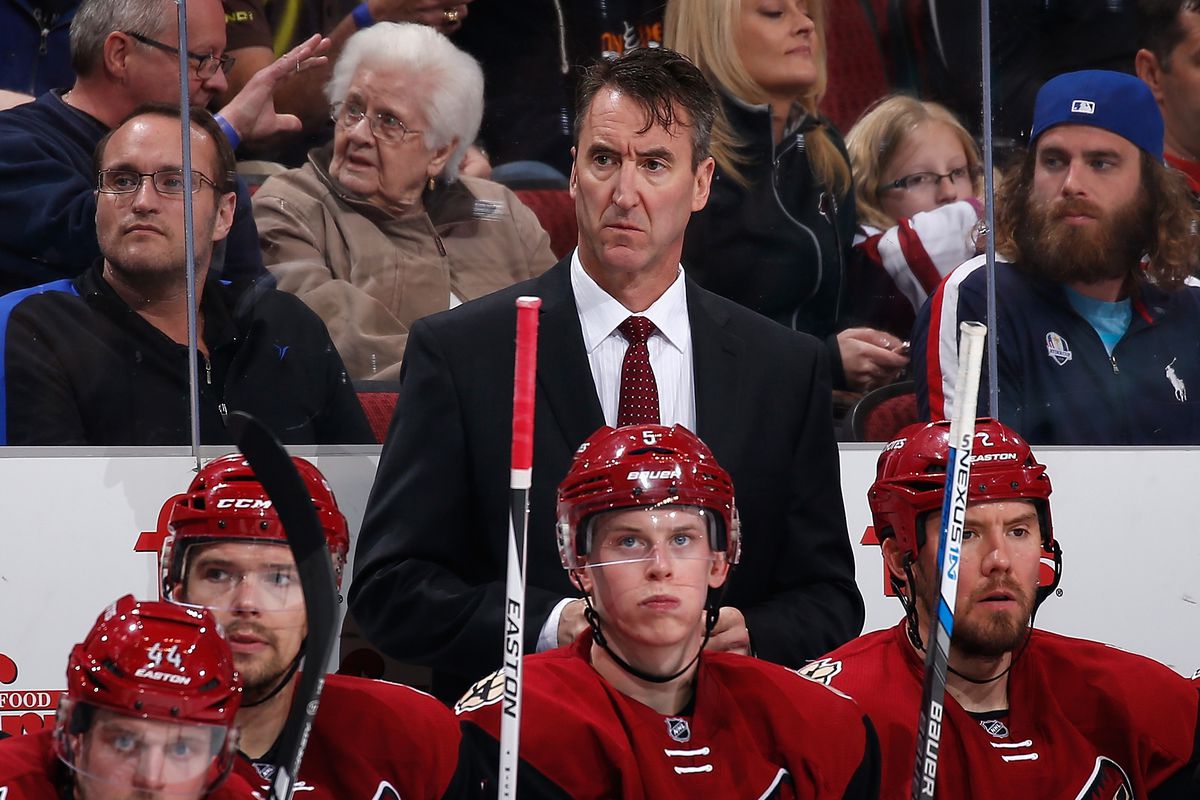 Dave Tippett has only been the head coach of the Edmonton Oilers for six days. Even in that short period of time, he’s put his stamp on the staff and begun to make changes. Over the weekend, we found out the fate of Edmonton’s three assistant coaches and got a good idea about what exactly the club is looking for now.

Not surprisingly, Trent Yawney was relieved of his duties as an assistant coach on Friday. The veteran coach was responsible for the defense and the penalty kill last season, which both struggled at times. Yawney has a great track record developing young defenders, and I thought he actually did some solid work with Caleb Jones, Darnell Nurse and Matt Benning.

Yawney being let go has nothing to do with the job he did, this is all about Tippett wanting his own guys with him behind the bench. Not only that, but Yawney is a prime target for Todd McLellan in Los Angeles. The two of them have a strong relationship, and it was McLellan that got Yawney to Edmonton a year ago. Those two getting back together makes a lot of sense.

Also relieved of his duties was Manny Viveiros. After just a single season in Edmonton, the former Swift Current bench boss is out of a job. Personally, I don’t think Viveiros was ever given a fair shot in Edmonton, and I really question why the organization brought him in to begin with.

His specialty is coaching the powerplay, yet he was never given the chance to put his stamp on Edmonton’s group. I was hoping to see him get a bigger role under Tippett, but understand that the organization is looking for more experienced hands right now. Unfortunately, a good coach got caught in the shuffle here and is done in Edmonton.

The #Oilers have announced changes to their coaching staff, relieving assistant coaches Trent Yawney & Manny Viveiros of their duties.

The only assistant coach that will return for a second season is Glen Gulutzan. The longtime coach will take over Edmonton’s powerplay, according to Sportsnet’s Mark Spector, and will be the man responsible for filling in his new boss on the details about the returning players.

Glen Gulutzan just told that he will stay on as an assistant coach to Dave Tippett. WiIl be responsible for powerplay.

Gulutzan, ironically, started his head coaching career in the NHL in Dallas. That’s where Tippett also began his head coaching career back in 2002. After just two seasons behind the bench with the Stars, Gulutzan was relieved of his duties. He served as an assistant coach in Vancouver for three seasons, then headed to Calgary to take over as the head coach for the 2016-17 season.

Once again, after just two seasons, Gulutzan was fired. That followed a disappointing 2017-18 season that saw the Flames drop back outside the playoffs.

Edmonton’s powerplay converted on 21.2% of opportunities this season, good for 9th in the NHL. For all of the team’s issues, the powerplay was actually solid for Edmonton in 2018-19. We don’t know who was running the man advantage, but I’d be willing to bet that Gulutzan had at least some role in that considering he’s taking it over full-time under Tippett.

Outside of the 2016-17 season, Gulutzan’s powerplay units aren’t anything to write home about. Edmonton’s group was strong a season ago, and perhaps he played a role in that. I’m not sure about Gulutzan in this role, but I do like him as a coach and think retaining him is the right move.

Speaking of retaining coaches, Jay Woodcroft will return to Bakersfield for a second season. Woodcroft did a masterful job, guiding the Condors to the franchise’s first playoff berth and first Pacific Division title this past season. Once there, the Condors won their first ever playoff series, defeating the Colorado Eagles 3-1 in the best-of-five series.

Outside of the strong record and playoff run, Woodcroft helped a number of prospects. Tyler Benson and Cooper Marody were two of the most impressive and productive rookies in the league, while Caleb Jones, Ethan Bear and William Lagesson all took strides defensively.

There were rumblings that Edmonton would lose Woodcroft to either LA or Toronto, who are both in the market for assistant coaches and who both have head coaches with a history with Woodcroft. In the end, Woodcroft enjoyed running his own bench and the sides were able to stay together. That’s a big win for the Oilers.

The Oilers will be looking for two assistant coaches to join Tippett’s staff in the coming weeks. We know Edmonton will need someone to help run the penalty kill and the defense, taking the role Yawney held. The favorite? Former Tippett assistant Jim Playfair.

Playfair served as an assistant coach in Arizona starting in 2011, joining Tippett in time for the club’s run to the Western Conference Final in 2011-12. He stuck with Tippett through the end of the 2016-17 season, when both were sent packing by the club. Playfair helped run the PK and defense in Arizona, and would make sense in a similiar role in Edmonton.

Other candidates? Dave Hakstol’s name has been thrown around a bit, but so far there has been no contact between the Oil and the former Philadelphia coach.

Mark Lamb, an assistant of Tippett’s in Dallas from 2002-2009, is another candidate. Currently the head coach of the AHL’s Tucson Roadrunners, Lamb’s name has been thrown out there.

I’d keep an eye on Edmonton in the coaching market this month. Tippett will want his guys in place ASAP in order to get a start on implementing a system and getting ready for training camp.