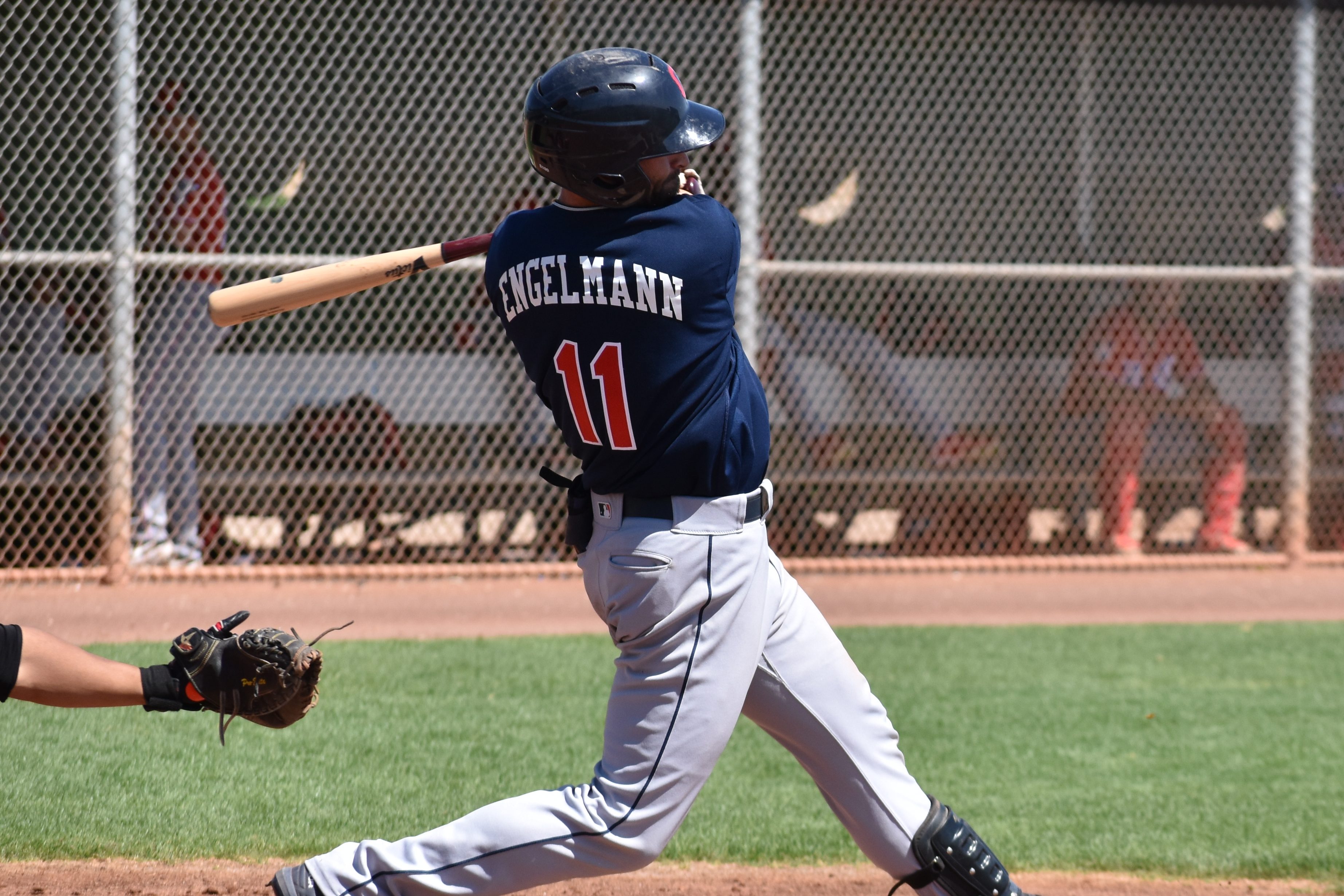 When writing about the Indians in extended spring training this year, one name continued to dominate headlines every week starting with his return to baseball activities on May 1st, Jonathan Engelmann. As he returned from an injury that cost him a timely start to the season, Jon quickly put together six hits (three doubles) and two walks in the first four games that I saw him play in 15 plate appearances as he took off at a similar pace to the way he ended last season.

Going back to last season, Engelmann was one of the players who was either hurt or helped by the Indians new policy of starting every single draft pick in Arizona. While he was a 31st round draft pick in 2018, he was also a well developed college player out of the University of Michigan. In the past, he almost certainly would have started in Mahoning Valley, but instead he went to Goodyear where he was on of Indians 2’s best hitters.

In 35 regular season games, Engelmann hit .315/.408/.519 with six doubles, two triples and four home runs. It needs to be noted, of course, that he was a year and a half older than the average player at this level at 21 when the season began.Whether his success in the AZL last year was due to his legitimate ability or more advanced approach is something that will be sorted out within the next two seasons.

Engelmann walks to the dugout during a 2018 AZL Indians 2 game at Goodyear Ballpark. – Joseph Coblitz, BurningRiverBaseball

To wrap up the year in Arizona, Engelmann went 3 for 5 with a double and two runs scored in the Indians play-off loss to the Dodgers and since the AZL season ends before any other minor league wraps up, he was able to fly to Ohio and get in three regular season games with the Scrappers where he hit .400/.455/.900, then had the opportunity to lose in the play-offs for a second time in a week as the Scrappers dropped two in a row to the ValleyCats (he walked once in five plate appearances).

With his first season in the books, we can look a little deeper into Engelmann than his raw numbers and what comes out is a very unique player. He is physically a big player (6’4″, 210 lb officially) and it looked a bit odd when he was in the outfield, but he has surprisingly good speed, good instincts and a good arm. He played almost exclusively in the outfield in 2018 and rarely made mistakes. Again, he possibly stuck out in this manner because he was one of the oldest players on the team, but that shouldn’t be held against him. In the end, all that matters is that a defender gets the job done and Engelmann certainly did that.

This season, however, the focus has been on moving him to first base. He worked out with the first basemen all spring training and played there every game that I saw him play during extended spring. Here, he is not quite as efficient as he can have problems scooping the low throws. This could be considered a situation where you have to pick your poison (his large frame makes him more likely to catch an errant throw up and away, but less likely to catch one low), but Michael Cooper has managed to avoid these issues and is a better defender at the position.

With the move from corner outfield to first, the memory of Mitch Reeves from the previous year’s AZL squad is brought up, although Engelmann is significantly more athletic than Reeves. In Reeve’s case, he has played almost exclusively at first base for the Captains this year despite still being listed as an outfielder. In fact, he’s played only 28 games in the outfield compared to 92 at first over his three years with the team.

Back to Engelmann, I believe he is much better suited in right field where a team can take advantage of his good speed and arm rather than first base, where his only real advantage is height.

Considering his speed, I have to say that you need to see it in person to really appreciate what he does on the bases. This extended I saw him steal five bases in six attempts, but there is more than that. Twice he managed to score from first without a corresponding hit as he used steals, wild pitches, passed balls and errors to steal a run directly off the battery. He is nowhere near the fastest player in the system, but the element of surprise provided by his sneaky speed may make him one of the most dangerous base runners.

Based on my own records of extended spring and those from Baseball Savant from last season (shown above), Engelmann is a very strict pull hitter, but he is not your typical home run focused hitter. He hit line drives on 27% of balls in play in extended and 30% last year during the regular season. As a right hander, he can pound the ball from the line to the gap in left and has the speed to turn nearly any hit into a double. There is obvious power behind his swing as well and I’d expect his home run numbers to rise as he advances through the system.

In the end, Engelmann could represent the tail end of one of the best drafts in Indians history. He was the second to last player drafted to sign (Daniel Schneemann came two rounds later) and already the Indians have seen inspiring performances from every player drafted between rounds 21 and 31. Specifically Gionti Turner (drafted in the 27th round and since traded to Tampa Bay for Chih-Wei Hu) and Billy Wilson had great seasons offensively in Arizona last year and many others from earlier in the draft, like Nick Sandlin, Adam Scott, Shane McCarthy and Steven Kwan, have already seen extended success further up the system. As the Scrappers set to start their 2019 campaign, the time could be now for Engelmann to cement himself as one of the top players from that draft, despite being taken at the very end.