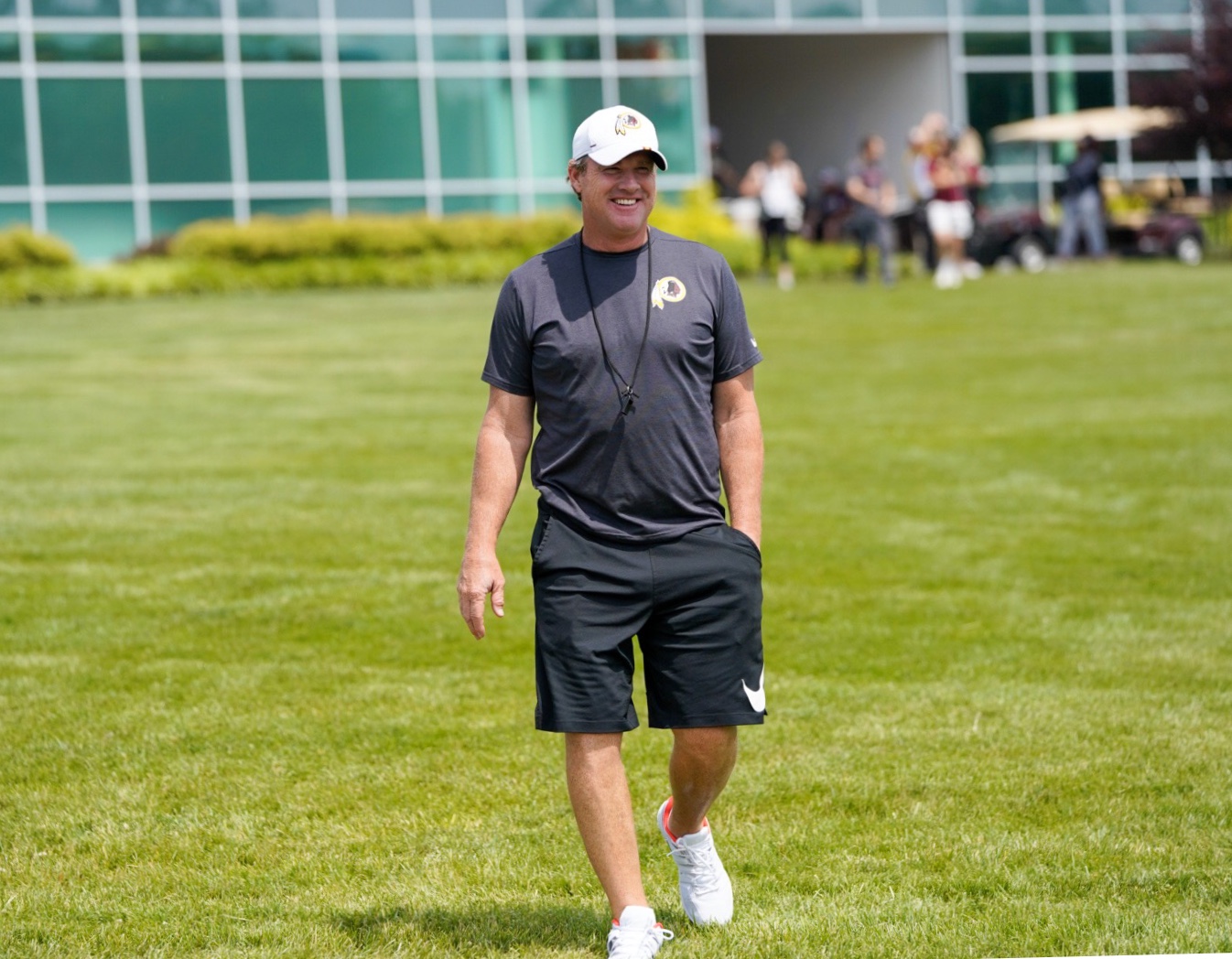 On the safety position:

“[Troy] Apke is doing well. It has been good to see him get a lot of these reps and work. Obviously, last year he did not get a whole lot with his hamstring, so he is progressing nicely. [Deshazor] Everett also has picked up the slack. He has done a very good job. [Jeremy] Reaves, he made some big plays out there today. So, those guys are taking advantage of their time.” 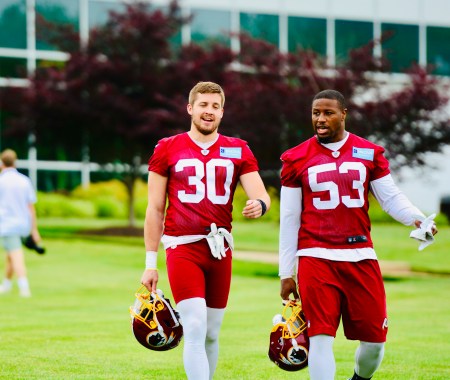 “We are just moving on. The big thing with Montae is getting the communication down with Landon [Collins] and whoever the other safety is. That is the thing about the safety position, who is down, who’s in the post. Communication is critical for those guys and the more work they get and the more situations we can put them in, red zone, third down, first and second down, all that good stuff, the better they are going to be. But with Apke and Montae, those are the most important things, critical things for them just to get the reps and get the communication.”

“Well he was having a good year, and then we made the trade for Ha Ha [Clinton-Dix], which moved him down to third, I guess. So, the reps did not come as plentiful as they were before we got Ha Ha, so that is probably why.”

“Well, we had high hopes for him. He had a couple injuries that set him back a little bit. So, couldn’t get him in there as often as we would have liked.”

On if T Geron Christian Sr. is experiencing setbacks:

“No. He is fine. He is just rehabbing. He did blow his knee out last year.”

On Christian’s participation in mini-camp:

“He is on pace to be ready for training camp. That has been the goal with him. A lot of these guys [Derrius] Guice, [Geron] Christian, some of these other guys, Jordan Reed, we maybe could have pushed them back in here but the most important thing is for them to get their rehab and to get them back to training camp full strength.”

On determining when injured players can participate:

“Health is first and foremost. That is up to the trainers and doctors. They give us a gauge. Some guys we let them practice a little bit and do some individual work, no team stuff, brought them along slowly in that regard. [Brandon] Scherff is a great example. He didn’t do a lot of team stuff, but we let him do some individual. Morgan [Moses] was the same way, but with Christian we thought it was best suited for him to stay away and mainly do the work in the weight room and training room”

On the possibility of OL Ereck Flowers playing guard:

“Yeah, yeah we are. I think with the lack of tackles we had participating, we had to put him at tackle and he did a good job. We did start him at guard early and he did a good job, but I think once we get to training camp we’ll put him back at guard. Wes [Martin] did a good job with his reps in there at guard. We need to get him some work. We have a lot of guys moving around at different positions. [Tyler] Catalina got in there to play some tackle, some guard. [Casey] Dunn played some guard and center. So, these guys have been playing multiple spots. Now it’s the matter, once we get to training camp, to try to get a depth chart somewhat together once everybody is healthy, who is going to be there and go from there.”

On the importance of the break before training camp for QB Dwayne Haskins:

“It’s very important. He has to learn it. If he feels like he is a little bit unsure of anything he has to study it and continue to go over it in his mind and rehash it. He will have plenty of videos to watch and all that good stuff. Dwayne is going to work hard at it, that’s for sure. When he comes back to camp, hopefully it will be more natural to him, calling plays in the huddle. Like I said before, it is his first time he has had to do it. We threw a lot at him, formations, motions, protections, route concepts, run concepts, audible, two-minute, no huddle, all of that stuff. There is a lot to learn for the kid, but we want to get it all out there for him so he has an understanding of what it is going to be like come training camp. A long way to go, but I like where he is at.” 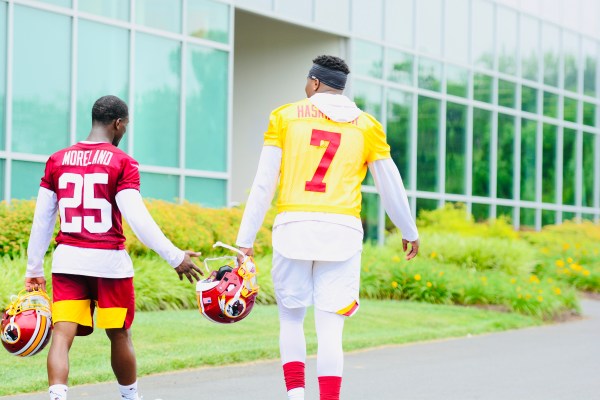 On the message to the players before training camp in Richmond:

“Well, I think they [the players] are in great shape. Chad (Englehart; Head Strength and Conditioning Coach) has done a good job, (Head Athletic Trainer) Larry [Hess], the training staff, getting these guys ready. They are in as good of shape as I have seen them, really most impressed with the rookies. The rookies came in here and they are in phenomenal shape. The main thing is to maintain it. That is the big thing, to maintain it, so when you come back to training camp there is not a period of time where we have to get back into shape. You have to stay in shape. That is the most important thing.”

On if there will be a concern if Williams is not at the start of training camp:

“If? There are a lot of “if’s” that we can go over right now, but I do not have time. I do not know what is going to happen. If Dwyane Haskins isn’t there, I’ll be concerned and if Case Keenum decides to not show up, I’ll be concerned. I expect everybody to be there, yes.”

“I know it’s early, but I really like our defense’s mentality, number one. I think we have a tough edge to us and I’m expecting that to carry over. I think it starts with our defensive lineman: Jonathan [Allen], Daron [Payne], Matt [Ioannidis], [Ryan] Kerrigan and adding [Montez] Sweat, I think those guys upfront set the stage for everybody. Now we have a tone-setter in Landon Collins that can help stop the run, obviously and be an impact player for us in the secondary. I’ve been really impressed with Fabian Moreau. I think his development has been outstanding at both the corner and the nickel spot. Obviously, the other safeties we talk about, [Troy] Apke, Montae [Nicholson], [Jeremy] Reaves, [Deshazor] Everett, those guys are going to have to step up. At inside backer, even though we lost Reuben [Foster], who we had high hopes for; we still didn’t know what he was going to bring to us. Having Mason [Foster] and [Jon] Bostic competing, and Shaun Dion Hamilton, along with Fabian, are our two most improved players out here.” 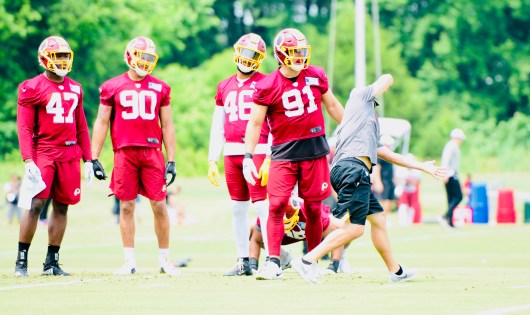 “We just have to get hopefully more production for him and he gets more opportunities. You know, I can’t promise he’s going to get a ton of opportunities with the group of guys that we have. You know with Jordan Reed and Chris Thompson healthy; they’re still going get their opportunities. With watching Terry [McLaurin] play, he’s going to get his, and we haven’t even talked about Paul [Richardson Jr.]. Trey Quinn is going to get some. The whole intent of this offense is to spread the ball around. We still want to run the ball. Hand the ball to Adrian [Peterson], [Derrius] Guice and Samaje [Perine]. It’s about spreading the ball around and everybody taking advantage when their number is called.” 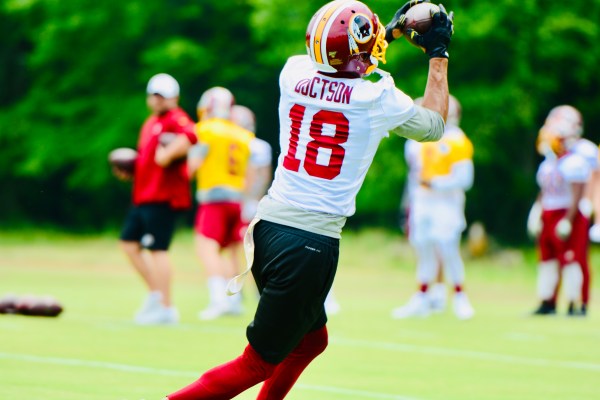 On the injuries at the running back position:

“I do expect [Derrius] Guice for camp. [Bryce] Love, I’m not too sure. We’ll have to wait and see on that one.”

On if Doctson is injured:

On splitting carries between the running-back group:

“You know with Guice not here and [Adrian] Peterson not here for the majority of camp, Perine has done an excellent job. He’s been one of our top performers on offense, really. I wish I had a crystal ball to tell you, but I do know that those are three very good football players. Adrian is a [Pro Football] Hall of Famer, Guice, we drafted in the second round for reason, and Perine has continued to get stronger and stronger in the weight room. He’s a powerful running back and he has not had the opportunities that he probably deserves or needs. But we just have to figure out a way to make the competition fair and play the best player, no matter whom they are or where they’re from.”

On his time before training camp:

“Well, I don’t know yet. I haven’t really decided. I’ve got a few things to do to get ready for training camp. Play a little golf maybe. Maybe get away for a little bit, I can’t tell you where I’m going, [points off camera] he might follow me… with his microphone [laughs] but I don’t know have any big plans yet.”

“We tried him there a couple of times a couple of years ago. I’m sure that he could probably do it. That’s an option, but he’s also a tailback in his mind and he wants the ball. Push comes to shove, if we need to have a full back and he’s the only one here, then he surely could do it because he’s got the power to do it. We got [Elijah] Wellman right now; he’s doing a nice job. J.P. Holtz can both play fullback and tight end, so they’re filling that role for us right now.”